Alistair Schramm and his 18-year-old thoroughbred Zero Degrees, aka Sweeney, were both destined to do well – it’s in their blood. It’s just that Sweeney’s bloodlines link him to a racing legend, not FEI Grand Prix dressage. 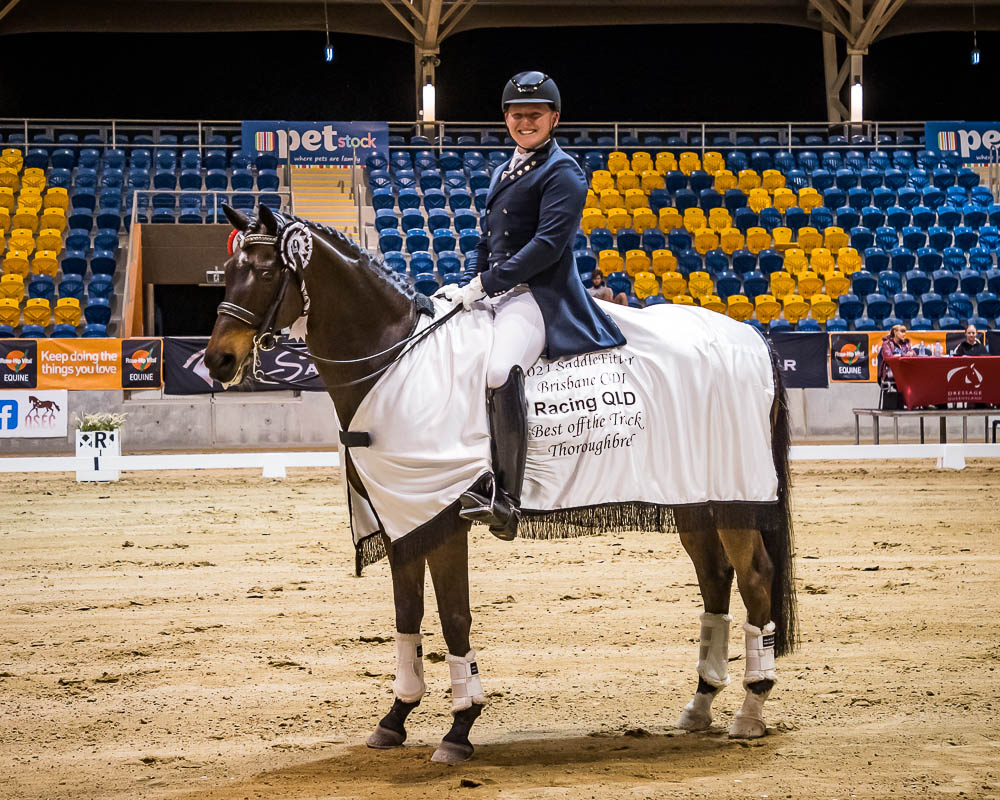 Alistair and Zero Degrees, aka Sweeney, who was the best-performed off the track Thoroughbred at the 2021 Brisbane CDN. © Stephen Mowbray
Click here to find out more about 4Cyte’s range.

“Sweeny is line bred to
the great Northern Dancer.”

When Alistair Schramm and Zero Degrees took the Racing Queensland sponsored Off The Track Thoroughbred award at The Saddlefitter Brisbane CDN, it completed the transition from ex-racehorse to FEI Grand Prix dressage horse for Sweeney.

Alistair Schramm is the younger brother of Australian international eventer Dominic Schramm, who is currently campaigning in the US; Dom recently finished second in a CCI4*S in South Carolina, and is set to start at the inaugural Maryland CCI5* with Bolytair B. Like his brother, Alistair, 23, is a dedicated and determined young athlete showing potential as both a rider and a leader in our sport.

Alistair acquired Zero Degrees, aka Sweeney, from Queenslander Suse Davis in 2012. At the time Alistair was looking for an eventer he could go on with and Sweeney already had the foundation work put in with several Preliminary dressage and 80cm showjumping runs under his belt and showing promise. In 2014, Alistair and Sweeney had several successful starts in Queensland then made the road trip from south-east Queensland to Werribee Park National Equestrian Centre in Victoria for the National Interschools Championships, where they took out the 80cm Eventing Championship.

The combination repeated the effort the following year at the 2015 Queensland Interschools Championships at Toowoomba. By this time Sweeney was showing genuine potential and a liking for dressage, so on the basis of Sweeney’s dressage performances, and for personal reasons, Alistair made the decision to focus their equestrian efforts on dressage. They both progressed quickly through the grades, and by the end of the 2015 competition season were competing EA Medium and FEI CDI-J Junior Rider.

The combination moved into the FEI Young Rider ranks in 2016 and generally put together respectable mid to high 60% scores and were always contenders to be reckoned with. In 2019 they stepped up to FEI CDN Under-25 Grand Prix classes and have continued to fair well. Last year, 2020, didn’t start well; Sweeney had colic and required surgery in February, so it was a quiet year for the pair. Their first outing for 2020 was in September at the Queensland Youth Dressage Championships at Toowoomba in the Grand Prix.

Highlights for the combination this year have been their results in the Under-25 Big Tour classes at the Barastoc Australian Youth Dressage Championships and The Saddlefitter Brisbane CDN, held at Queensland State Equestrian Centre in September, where they finished second to Eliza Cullen and Dobria de Jeu on both occasions.

The story of Alistair’s journey with Sweeney is even more remarkable when you look right back to his breeding at Ruane Stud, in Menangle, NSW. Born in 2003, Sweeney is by Danzero out of Curtain Time and is line bred to Northern Dancer. In 2004, Sweeney was sold as a yearling at the Magic Millions Gold Coast sales for $150,000 to Asian connections, sent to Sha-Tin in Hong Kong and barrier trialled as Sweet Win as a two-year-old, but suffered an injury. After his recovery, he barrier trialled again but his connections decided not to go on with his racing career and Sweeny become a lead horse. He returned to Australia somewhere around 2009-10 and went to Bec Brown at Hillview Thoroughbreds, who has rehomed over 800 racehorses that have returned from Hong Kong.

Bec recalls Sweeney returning to Australia completely sound, albeit small in stature and not really built for racing. “He was a talented little jumper. I always regretted letting him go as he would have also made a super little show hunter hack!” says Bec, who rehomed him to Suse Davis.

Alistair and Sweeney were the CDN U-25 Big Tour reserve champions at the Australian Youth Dressage Championships and the Brisbane CDN. © Geoff McLean - Gone Riding Media

“He’s quirky but a really chilled,
fun to be around nice guy.”

ALL IN THE BREEDING

Genetics are what makes this story even more interesting, and what can we learn from it? The answer is genetic critical mass. Sweeny is line bred to the great Northern Dancer, so let’s consider the work of Frederico Tesio, the famous Italian 19th century master Thoroughbred breeder. While Tesio never shared his secrets, an analysis of his methods has revealed a seven-step process:

Whilst Sweeney did not show an ability or propensity to race, the superior genetic athletic ability and temperament to training and work characteristics of Northern Dancer came through in the form of athleticism and gymnastic ability. When questioned about Sweeny’s character and temperament, Alistair says: “He’s quirky but a really chilled, fun to be around nice guy who is willing, wants to work and puts his best foot forward. Personality wise, he’s the boss and he’d chew your arm off for a piece of liquorice.” EQ