“If I can do it, anybody can,” says Queensland-based dressage rider Elizabeth Owens, referring to her success with Grand Prix mare Revelwood Starlite at the recent Brisbane CDN. Working full-time, Liz is a “true amateur rider” who fits her training in around a 9-to-5 job. “It’s lots of early mornings training before work, and so it’s been really satisfying to get her up to Grand Prix level.” 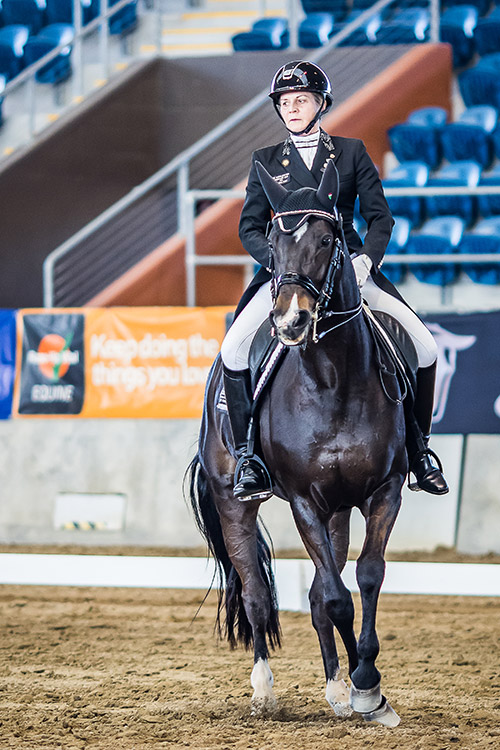 Liz and Revelwood Starlite won the Inter II and Grand Prix at the Brisbane CDN. © Stephen Mowbray
Formulated to deliver a low starch, high fibre complete feed, Pure Vitality is the perfect feed for mature horses of any discipline. 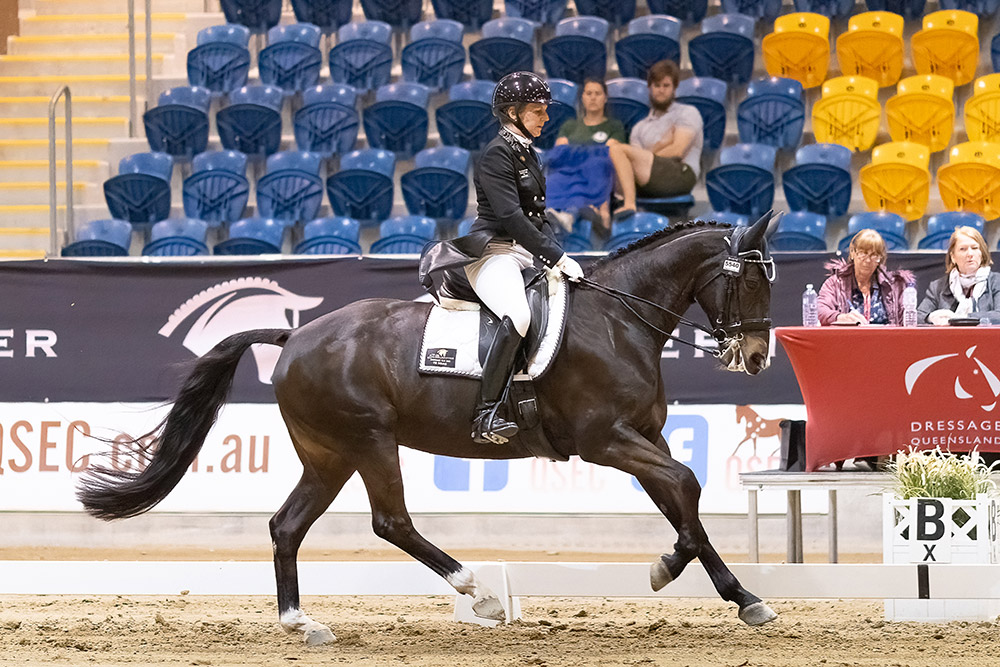 Liz has had Revelwood Starlite, aka Stella, since she was a four year old and has trained her to Grand Prix. © Stephen Mowbray

The Brisbane CDN was the first major dressage event in Australia since May’s Sydney CD-Lite, and despite competitors from Victoria and NSW unable to attend, those from Queensland — such as Liz Owens and Revelwood Starlite — were keen to put their best hooves forward.

Liz and ‘Stella’ contested the Big Tour classes and won the Inter II and Grand Prix tests with scores of 65.257% and 65.435%. For Liz, an avid competitor, just being able to attend an event was enough to put a smile on her face — and to do well was icing on the cake. “I was just happy that she played the game. She had dancing shoes on that day, so that was really nice!” she says, adding that the mare doesn’t particularly like working indoors and is a much better outdoor horse. “She didn’t actually show her full scope in terms of what she can do in the passage and piaffe tour, but having said that she was with me enough to be able to score well.”

Liz is no stranger to Grand Prix dressage; she’s won five national dressage titles, was named as a member of the Olympic athlete program from 1996 to 1999, and served as the Chef d’Equipe for the Australian dressage team at the World Equestrian Games in 2014. While she’s trained with a range of high-profile riders, Australian Grand Prix judge Irene Bakels-Noreen has been her primary coach for the past 30-odd years.

Liz bought Stella as a four-year-old from the late Amanda Shoobridge at Revelwood Stud; now 13, the mare has been with her ever since. “Amanda actually came up to the Brisbane CDI and Young Horse Championships one year and rode Stella for me as a four-year-old, and I remember her saying, ‘I created that’, as she was bred via embryo transfer through a surrogate.” As well as a top rider and breeder, Amanda was a veterinarian and one of Australia’s leading equine reproductive specialists; Liz wishes she were here to see Stella’s success and the influence her breeding program has had on Australian dressage.

Although the mare wasn’t particularly successful in young horse classes, Liz explains it was the feel she gave when ridden that hinted at her future success. “As a young horse, you needed to have the opportunity to sit on her [to fully appreciate her]. That’s what clinched it for me; I sat on her and I felt this willing, trainable, switched-on and compliant horse, and I bought her with my daughter, Shannon — who’s a Grade II para dressage rider — in mind, so the temperament was absolutely critical and the trainability was everything.

“She also had three good, true paces, was very sound, plus I liked the breeding… she is a little bit small for me, but again she was the right size for Shannon. In the end, I think it was my arse that decided! I sat in the saddle and thought, ‘I can have a lovely conversation with this horse through my seat’, so that’s what clinched it.”

Liz explains that Stella has a super temperament and is “an absolute dream of a horse to have around”, whether you’re out on a trail ride or training dressage. “She has been a horse for the family to really enjoy… not just to do fancy stuff. It was just lucky that she turned out to be pretty handy at passage and piaffe, and one-time changes were just a dream for her!”

For quite some time, Liz and Shannon enjoyed sharing the ride on Stella. “She would ride her in para classes, which were walk and trot tests, and then I’d take the horse later in the afternoon for the Grand Prix.” Unfortunately, new rule changes eventually meant this was no longer possible, and Liz explains that the mare is now for sale partly as a result of this.

“There are not a lot of big shows in Australia at the moment and since Shannon and I can’t share any more, it’s become a bit of a luxury I can’t afford. It was a lovely note to finish on, winning the Inter II and Grand Prix at the Brisbane CDN.” 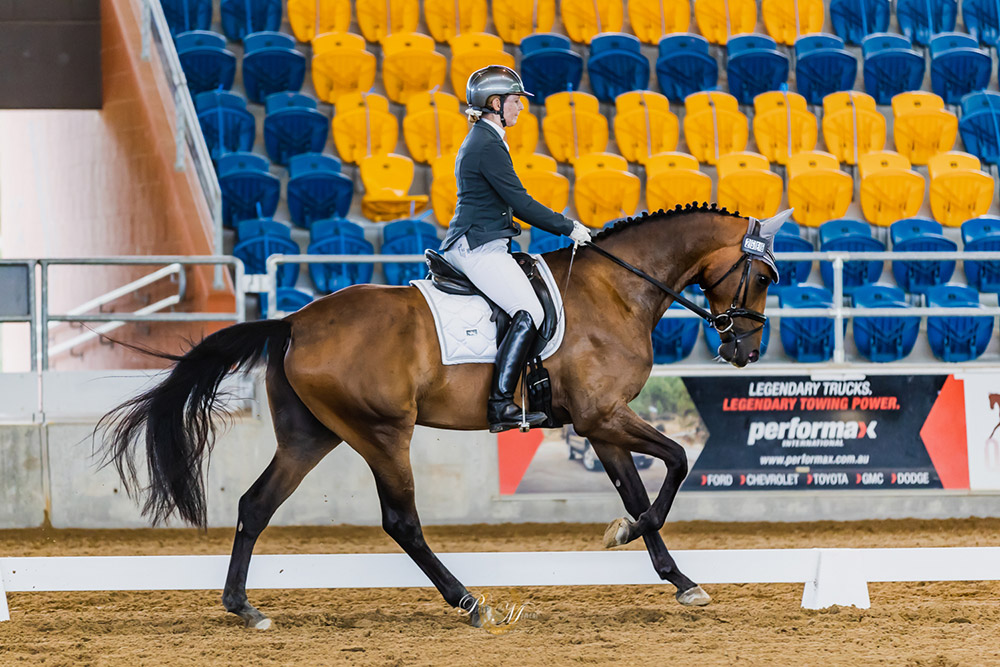 Liz explains that she also has a young horse in training, and with full-time work she really only has the time to focus on one. “I have a really lovely four-year-old, bought as an unbroken two-year-old from Dirk Dijkstra, called AEA Topaz. He’s by AEA Tuschinski out of a Flemmingh mare. He was broken in by Matthew Lord — another Queensland rider who was very successful at the Brisbane CDN — and he did a great job, and so I’ve had Topaz now for nearly two years and I’m starting to compete him.”

The pair competed at a young horse competition in Queensland back in February, scoring over 80%, and now Liz is keen to take him out and compete in a few Preliminary and Novice tests. She hopes he’s ready to begin stepping up — and delivers a smooth ride along the way. “You just hope you stay on with young horses!” she laughs.

Liz Owens and her Grand Prix mare are a great example of an all-Australian success story. Revelwood Starlite is Australian bred, has been trained by an Australian amateur owner rider in Liz, who is in turn trained by an Australian-based coach. While it’ll no doubt be hard for Liz to wave goodbye to such a special mare, it’ll give her a chance to focus on her next shining star — and it opens the door for another lucky rider to take over the reins of a super Grand Prix horse. “Hopefully she’ll give somebody nearly as much joy as she’s given me.” EQ

It’s All In The Genes For Alistair & Sweeney – Equestrian Life, October 2o21