Just over 50 years ago, a dedicated group of visionaries met to establish the Dressage Association of Tasmania and put the state on a level footing with the rest of Australia. 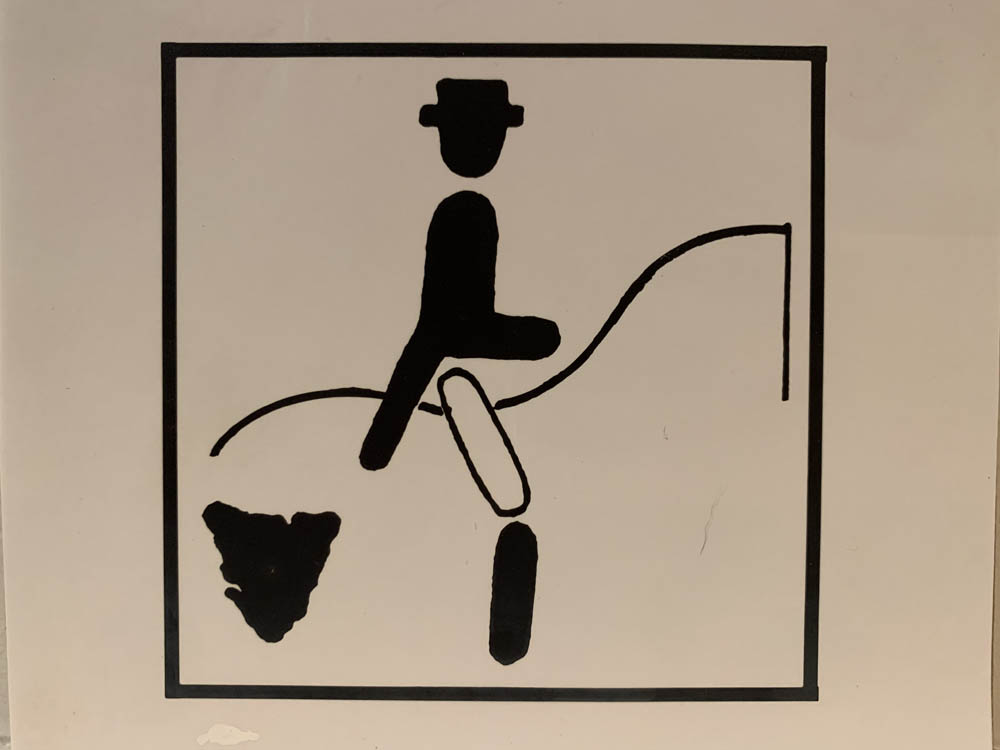 The original Dressage Association of Tasmania logo created in 1971.
Targeted nutrition to enjoy your ride.

It was a cold, dark night, the moon high in the ink black sky, its glow softening the moody clouds above. At close to midnight the township of Campbell Town is still and silent, except for the opening and closing of car doors. Illuminated by the yellow blush of the street lights, large plastic storage tubs were moved from one car to the large boot of a 4WD, heavy with documents and folders yet light with the promise of what they held inside.

Contained within one of the tubs is the documented evidence of the creation of the Dressage Association of Tasmania. An innocuous, olive-green, lined record book held the secret known by only a few who remain with us today. In the hardcover book are pasted-in typed sheets of agendas, minutes, cuttings from newspapers and the beautiful, flowing cursive handwriting of the secretary of the day.

On 28 January 1971, a small group of like-minded horse riders formed an association that continues today. The founders were friends with a passion for horses and riding and a strong desire to formalise the sport of dressage in their state. Up until then dressage was an adjunct to hunt days, agricultural shows and the growing popularity of three-phase eventing.

The first meeting of the newly formed Dressage Association of Tasmania was held at Dysart House, a majestic, upright, Georgian-style, two-storey former coaching inn built in 1842. Dysart House had been a rest stop for travellers between Hobart and Launceston. The twenty-two stables that housed the horses of the resting travellers now store ageing barrels of whisky distilled by the Old Kempton Distillery.

The founding friends gathered and organised the first dressage competition to operate under the rules and regulations of the Equestrian Federation of Australia (EFA). The tests to be offered were novice and elementary at the popular Hamilton Show on 29 March 1971. Judges from Victoria and New South Wales were invited to join the team of officials. The minutes of the meeting also detail cost of entry, prize money and the colour of the ribbons – not dissimilar to what continues to be discussed at committee meetings in the modern era. 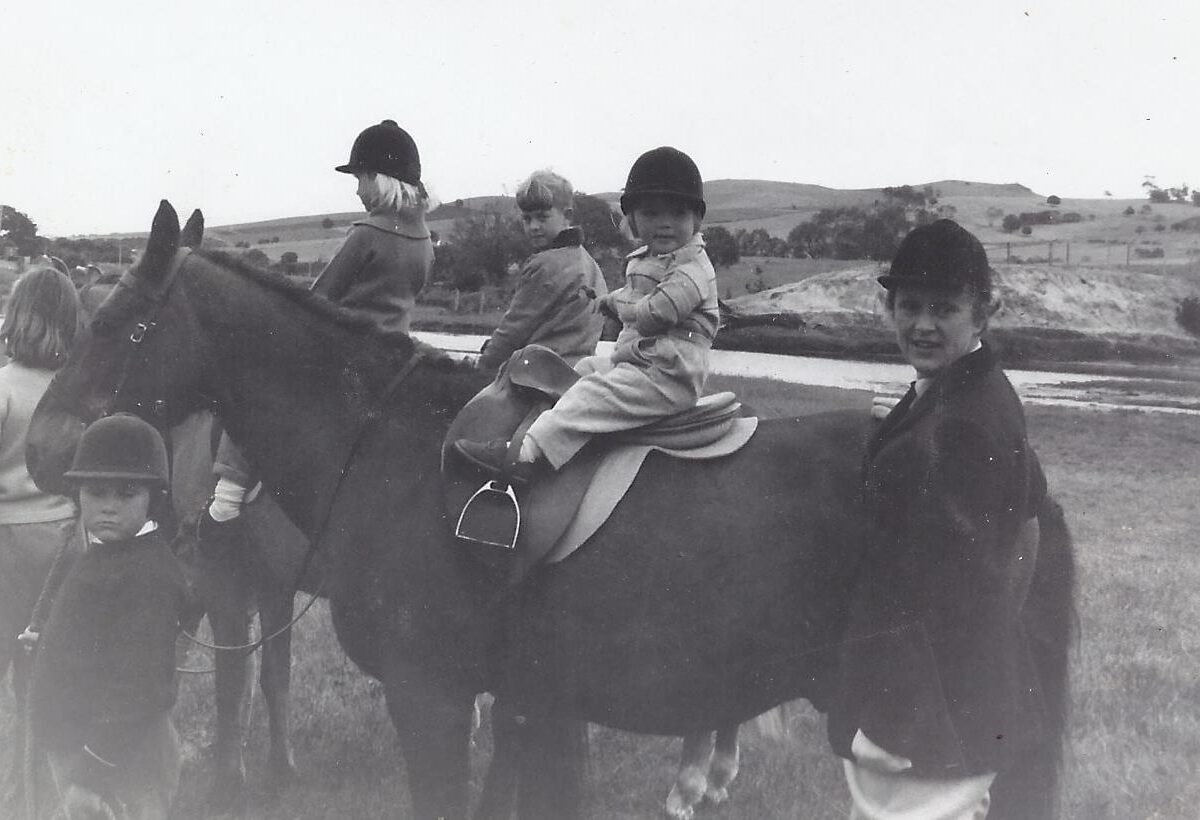 A. Tasmanian dressage rider Mandy Parsons, in the saddle from an early age! B. Mandy has gone on to be a very successful competitor. © Roger Fitzhardinge. 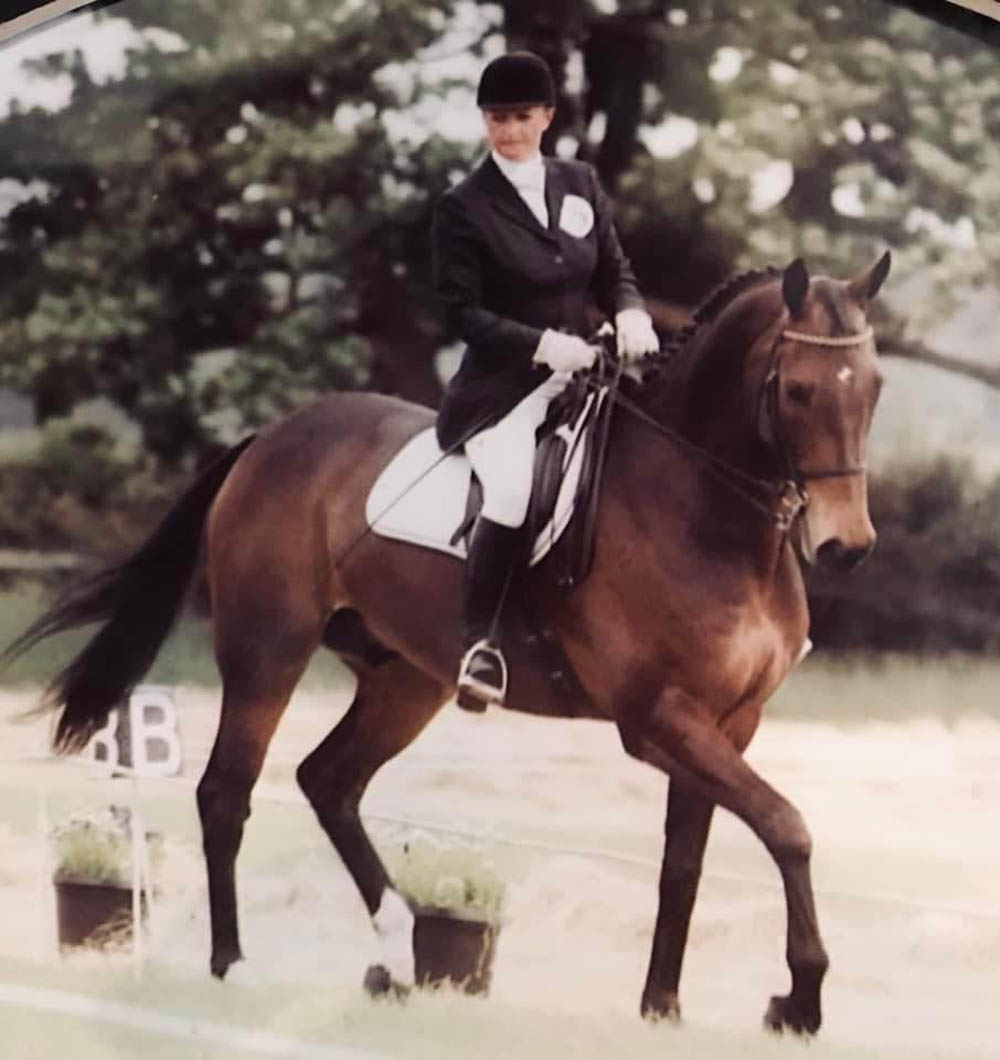 Judi Newman and her off the track Thoroughbred, Irish Fire, were a very successful dressage and showing combination in the late 80s early 90s.

“It is wonderful to discover
all of the ‘firsts’.”

Deeper into the pages of that olive-green record book there is evidence of how forward thinking the founding members were. It is wonderful to discover all of the “firsts” – the first member newsletter, the first competition, the first AGM, the first judge and first riders’ clinic.

In 1973, the committee hosted Franz Maringer at the Royal Hobart Showgrounds. By invitation, on offer were three days of riding instruction and demonstration and lectures, an evening lecture and a film night where Franz shared films of the Munich Olympic Games and other European events. Horses were sourced and provided by the committee and the cost to attend for the day period was $3, the evening lectures $2 and the film evening $1. The members’ newsletter, of which an original copy is pasted into the book, documents the clinic as being a great success despite the wet and gusty weather. Between 50 and 60 people attended the lectures and the highlight being the film night, which was enjoyed by over 100 people.

Many of the founding members enjoyed great success as riders and judges and passed on their passion to others. The late Dr Parson’s daughters, Fiona and Mandy, have had highly successful careers in teaching, judging and breeding exceptional dressage prospects on the state and national stage.

June Chesterman became Tasmania’s – and Australia’s – first FEI International Dressage Judge. June passed away in 2017 after dedicating her life to her family and dressage. A beautiful article written by Jacqueline McArthur tells a story of the intersection of Franz Maringer in Hobart and June’s attendance at the clinic as her inspiration to become an international judge.

Diana Wolfhagen, a founding member of the Dressage Association of Tasmania, currently lives on a beautiful country estate in the north of Tasmania. In the early 1950s, a teenage Diana was offered by her parents the choice of either going to a finishing school in Victoria or going to visit family in the UK and ride. Diana didn’t think twice and took herself by ship on the open seas for three months to the UK. Here she immersed herself in all things horses and learnt to ride under the keen eye of British instructors. Upon her return home, she brought back with her insights and the energy to improve the riding skills in her home state. Diana became a B-level judge where she joined international and national judges as an official at the Australian National Dressage Championships.

Brenda Atkinson also lives in the north of Tasmania and is a life member of the Dressage Association of Tasmania. Brenda is a highly regarded and revered equestrian and dressage judge, and was a dear friend of the late June Chesterman, with whom she travelled extensively. 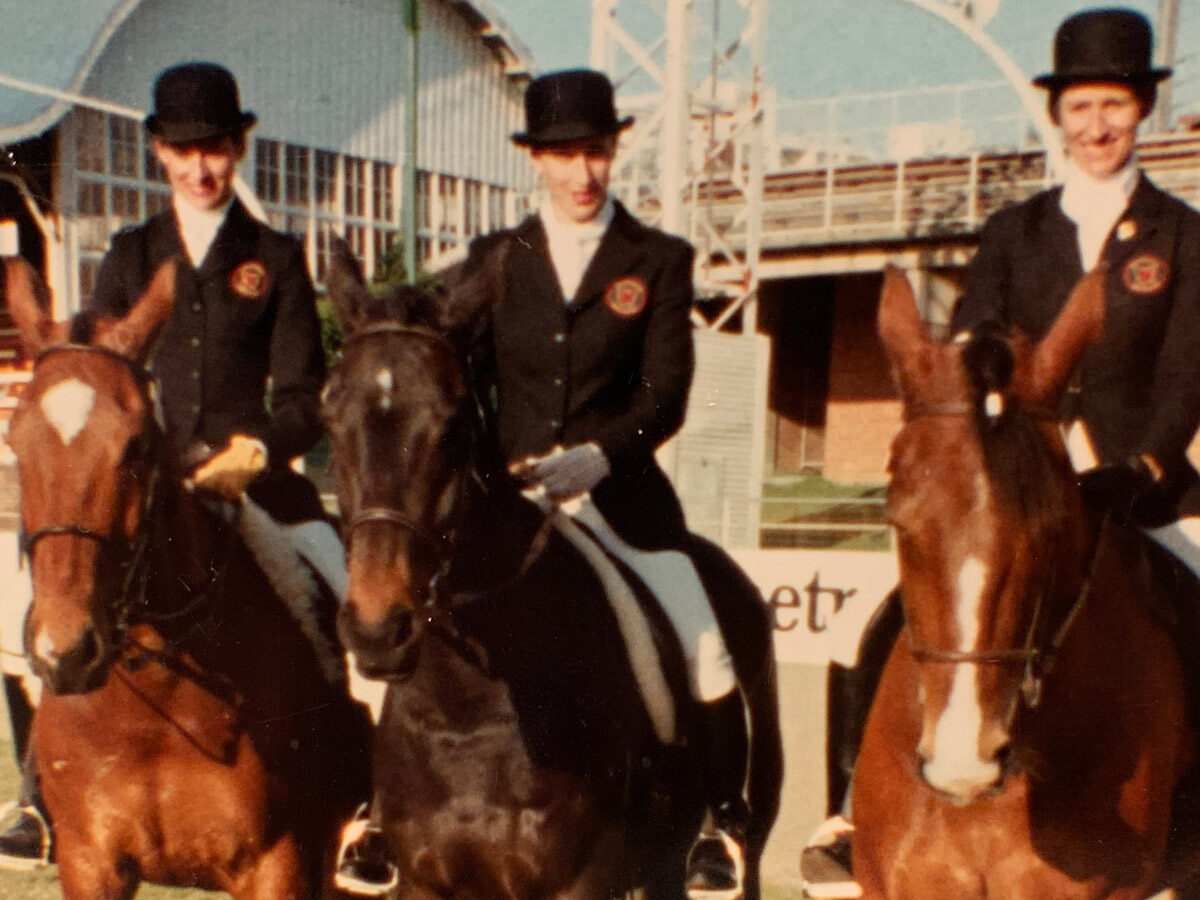 The Tasmanian team at the Nationals in Sydney, 1983. L to R - Judy Peel and Hickory (Medium), Bert Gibson and Sir Said (Novice), and Jenny Marwood and Sherpa (Elementary). 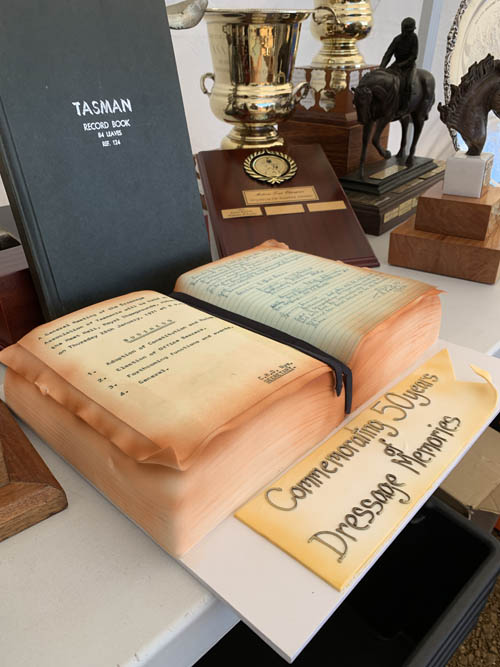 A cake replicating the green ledger book, created for the Tasmanian Dressage Championships in 2021. The event celebrated 50 years of the Dressage Association of Tasmania and had on display old documents and historical trophies.

The 1970s was the era when dressage stamped itself as an official sport in Tasmania, however, Tassie’s first brush with dressage goes back to the early 1950s. There was buzz in the air when Australia was named host nation for the Olympic Games in Melbourne in 1956, and it was being felt across the nation.

As host country, it was imperative that there was representation at all Olympic events. The EFA secured the services of Captain John Snedden from the UK to conduct clinics around Australia to find the perfect combinations to represent their country in Stockholm. Why Stockholm? The International Olympic Committee declared that the equestrian events for the 1956 Olympics were to be held in Sweden, purely for the welfare of the horses and the time required for quarantine in Australia when arriving from overseas.

The net was cast wide and in 1953 at the Elphin Showgrounds in the north of Tasmania, Captain Snedden drilled 30 hopeful and hand-selected combinations from around Tasmania. The five-day clinic started in the morning with dressage training, while the afternoon was showjumping and the art of cross country. Diana Wolfhagen recalls attending the clinic on her showjumper who was a bit exuberant, which did little to impress Captain Snedden.

Fast forward to now and Tasmania boasts a history of outstanding and accomplished dressage riders and judges who have influenced the current enthusiasts that learn and hone their craft in the dressage arena on the national and international stage.

The foundation for ongoing learning through seminars, masterclasses, judge clinics and rider clinics was set by a small group of enlightened and intelligent visionaries. Over the past many decades, Tasmania has welcomed interstate and international coaches and judges to assist in the pursuit of harmony and ease of grace between horse and rider. Luminaries such as Christoph Hess, Michael Eilberg, Gonzalo Carvalho, Brian Sheffers, Roger Fitzhardinge, Charlotte Pedersen, Carolyn Lieutenant, Peter Fischer, Dirk Dijkstra, Mary Hanna, Vanessa Ward, Briana Burgess, Andrew McLean, Heath Ryan, Rozzie Ryan and the list goes on.

What does the future hold for dressage in Tasmania? History will tell, and with the past as its guide, it will be influenced by the next generation of focused, hardworking dressage enthusiasts with a strong desire to continue to learn and improve all aspects of the sport in Tasmania. EQ