Pampered with luxury shavings in his private shed, World Star, the horse that took Kate Taylor-Wheat on a remarkable rise through the ranks, still thinks he is royalty – if not human. 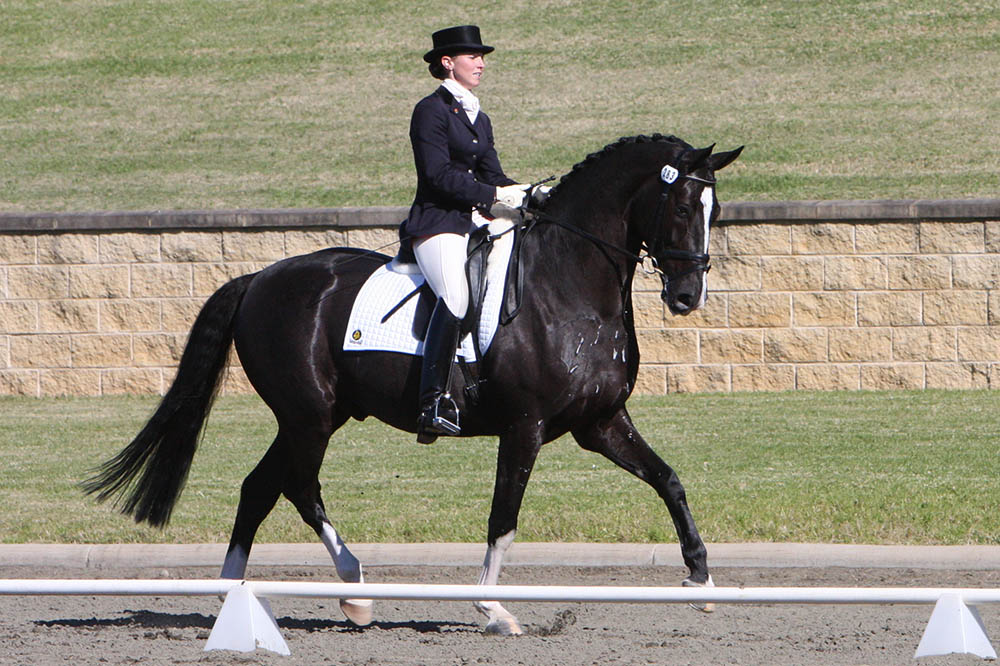 Kate Taylor-Wheat and World Star as a five-year-old. © Roger Fitzhardinge.
Formulated to deliver a low starch, high fibre complete feed, Pure Vitality is the perfect feed for mature horses of any discipline

Kate Taylor-Wheat is a name often heard of in top dressage competition circles. She has several outstanding horses and is currently producing her next FEI horse in Destino II. But there were two horses that launched her career – Oscar B and World Star.

Oscar B was a very beautiful Grand Prix horse that won many titles before retiring in style in 2014 at Kate and husband Adam’s property at Glenorie on the outskirts of Sydney. He was still stabled at night and let out into a grass paddock during the day as he always had been during his very successful career. He was not ridden in his retirement due to a minor suspensory ligament injury but, needless to say, he managed to play the fool around his paddock until his untimely death induced by an extreme colic attack.

World Star’s story is one of Kate finding her dream horse and embarking on a journey full of ups and downs. Kate’s father, Graham, was a very successful businessman starting his own construction business and also becoming managing director of Lendlease. He was always enthralled by Kate’s competitive and dedicated passion for dressage and fully encouraged her. Before he passed away in 2004 from cancer, one of his final wishes was for Kate to find a seriously fancy, competitive dressage horse and campaign it to the top of its game!

After many months of searching without luck, Kate headed to Germany with Matthew Dowsley, her coach, mentor and friend. It was again difficult to find anything they liked until towards the end of their visit. They looked at a horse on offer but decided it wasn’t suitable; however, the sellers mentioned they had another that was less advanced but may be worth a ride. It turned out to be World Star.

He was a two-year-old colt who had passed his 30-day testing but was still very green. A tall and gangly liver chestnut (Kate always said he was black), he was a beautiful headed horse with plenty of white socks and a great presence. His paces were huge and he seemed to have wonderful trainability. His breeding was by World Magic and out of the mare Galia by Grosso Z. 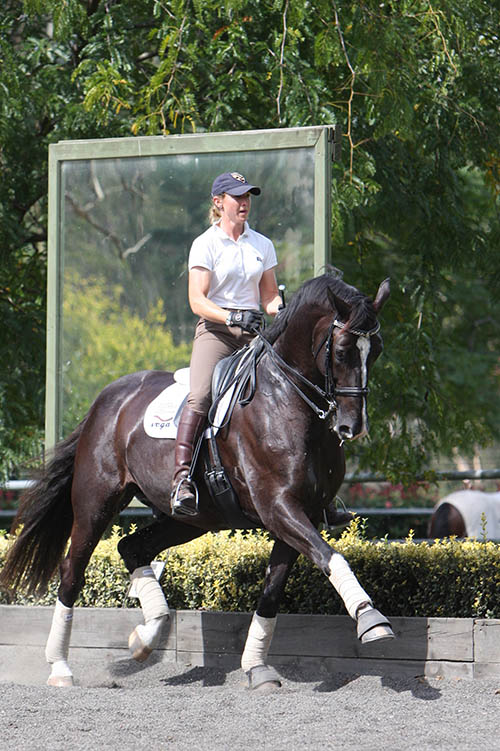 World Star, aka 'Sox', had elastic and expansive paces under saddle. © Roger Fitzhardinge.

After two rides he was vetted, purchased and transported to Australia to start his training with Kate. On his arrival, it was very obvious that he had found his manhood and was well and truly every bit the male Adonis, so there was no hesitation in having him immediately gelded. He returned from his minor surgery a new guy, back to the World Star that was kind and gentle and loved attention – but he was never one to enjoy the company of his own species!

He went straight to Matthew’s for his early training to set the wheels in motion and it was not long before Kate took over the reins and never looked back. It was at this time that Oscar B was competing Big Tour with great success; World Star – or ‘Sox’ as he was called – started at the Novice level and steadily move up the levels with many admirers! He gained an 89.6% at Novice level and was Novice Dressage Horse of the Year.

He was a very successful as a young horse with his elastic and expansive paces that showed rhythm and harmony with Kate; his walk could have hit a 10 but was often a 9 or 9.5! At the 2008 Sydney CDI as a six-year-old, he was Young Horse Champion of Champions.

World Star skipped Elementary and went straight to Medium. In 2009, he was the EA Medium and Advanced Horse of the Year, National Medium Champion and Reserve National Advanced Champion, Central Coast Advanced Champion, and also a Dressage NSW Gold Medal winner at Medium.

In 2010, it was time to step up to the FEI level, which he did with ease and continued on his progressive and positive performances towards that elusive Grand Prix level. World Star had many wins at Small Tour and was crowned the National Prix St Georges Champion that year, and then his dominance at the level continued through 2011. 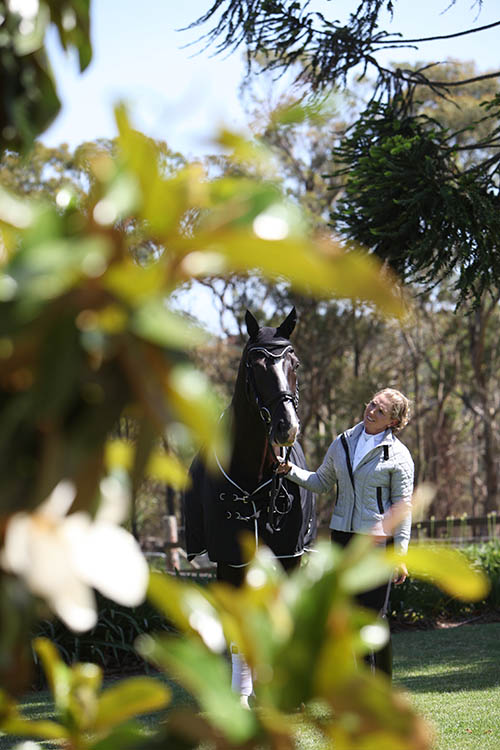 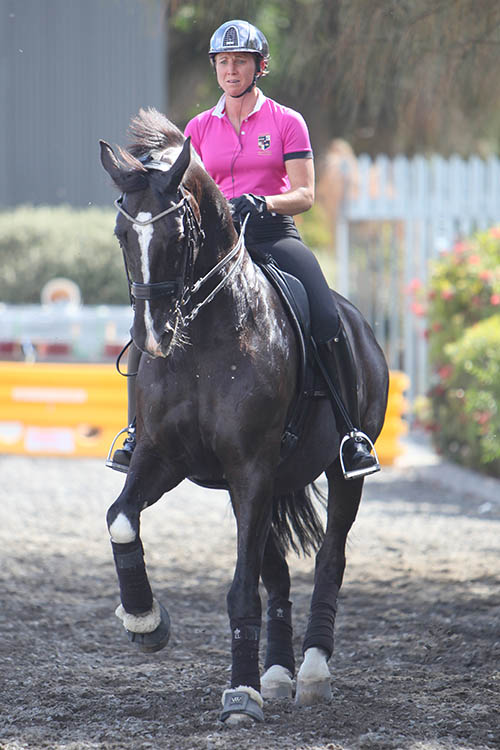 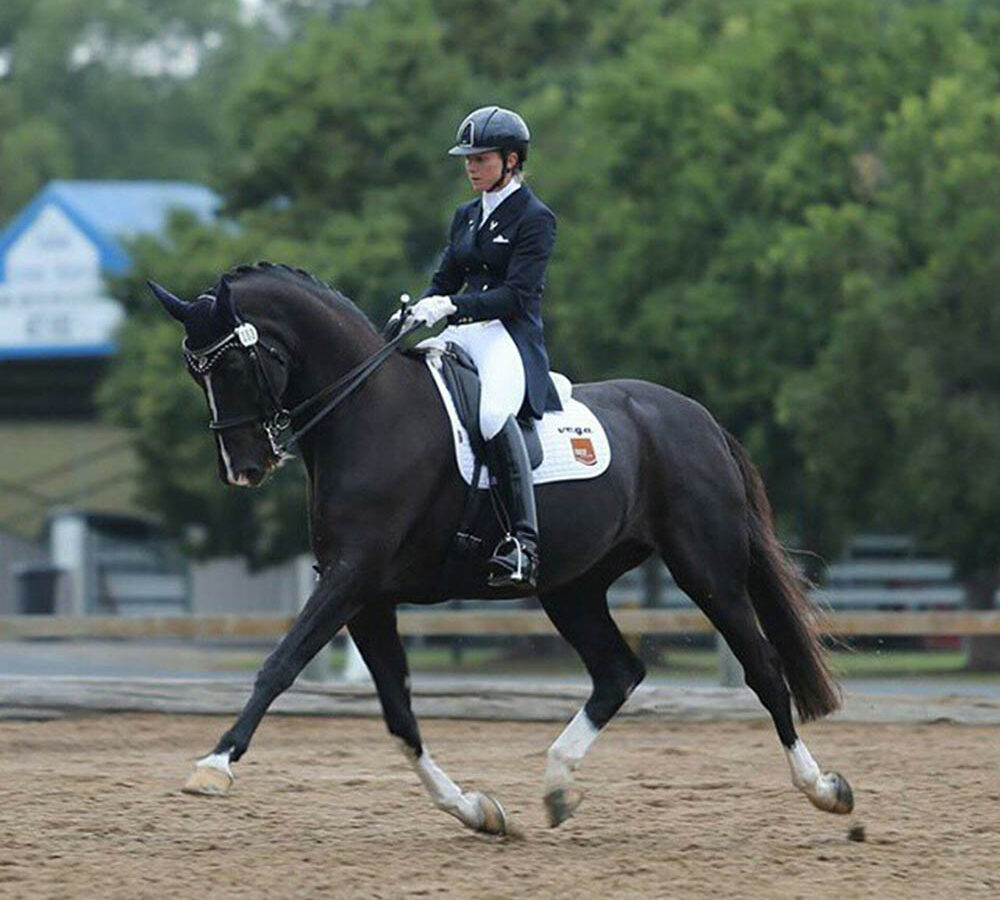 Sox was a special needs horse and was often referred to as the “golden child”. Image supplied by Kate Taylor-Wheat.

Sox was a special needs horse and was often referred to as the “golden child”. Image supplied by Kate Taylor-Wheat.

Never assume the going was easy, though. Sox was always immune compromised since his arrival in Australia; he had multiple respiratory problems and he contracted equine herpes. He fractured his pelvis whilst staying overnight at a veterinary clinic and had operations on both hind legs for suspensory problems. He was a special needs horse and was often referred to as the “golden child”. He was always getting the sympathy vote and was the master of the unique and difficult injury.

Never one to give up, in 2012 he and Kate were the Inter I Freestyle winners at the Sydney CDI and were achieving scores of 73% in the Prix St Georges and 70% in the Inter I. That year, the pair had their first Big Tour start in an Inter II test and won! Quite a feat.

Then the biggest of life’s hurdles challenged Kate in the middle of all this – she had a year battling breast cancer. With operations and months of chemo, it was gutsy fight. If that wasn’t enough, it was followed by a bout of severe back problems caused by a fall, and then she had a pacemaker fitted on top of all that! It is called “when the going gets tough the tough get going!” Then there was a fractured knee and an anterior cruciate ligament rupture and meniscus tear that she did dismounting at the halt. What a woman to endure all this and never a whimper was heard.

During Kate’s convalescence, World Star would be rested and lightly lunged just to keep a topline and some fitness. It was onwards and upwards with Sox towards Grand Prix, but the art was to keep him strong, sound and healthy and that was a full-time job in itself. Just as he started to get going, he contracted Ross River virus and as a result of his compromised immune system he would be easily susceptible to cellulitis.

The pair returned to the competition arena and contested the NSW State Championships with a high placing, but World Star was not really totally healthy, and it was after this that it was decided to retire him from competition. Kate continued to work him and eventually the one tempi changes all came together.

She did get accepted for three masterclasses with him over the years, the first with Edward Gal and Hans Peter Minderhoud in 2011 at Equitana in Melbourne, and then with Steffen Peters. World Star’s very final outing in public was with Patrik Kittel, again at Equitana. He demonstrated all the Grand Prix movements and showed a great talent for the piaffe and the passage. On returning to Sydney, he was slightly lame with a mild strain of the suspensory in a forelimb. It was time to put an end to his ridden days. 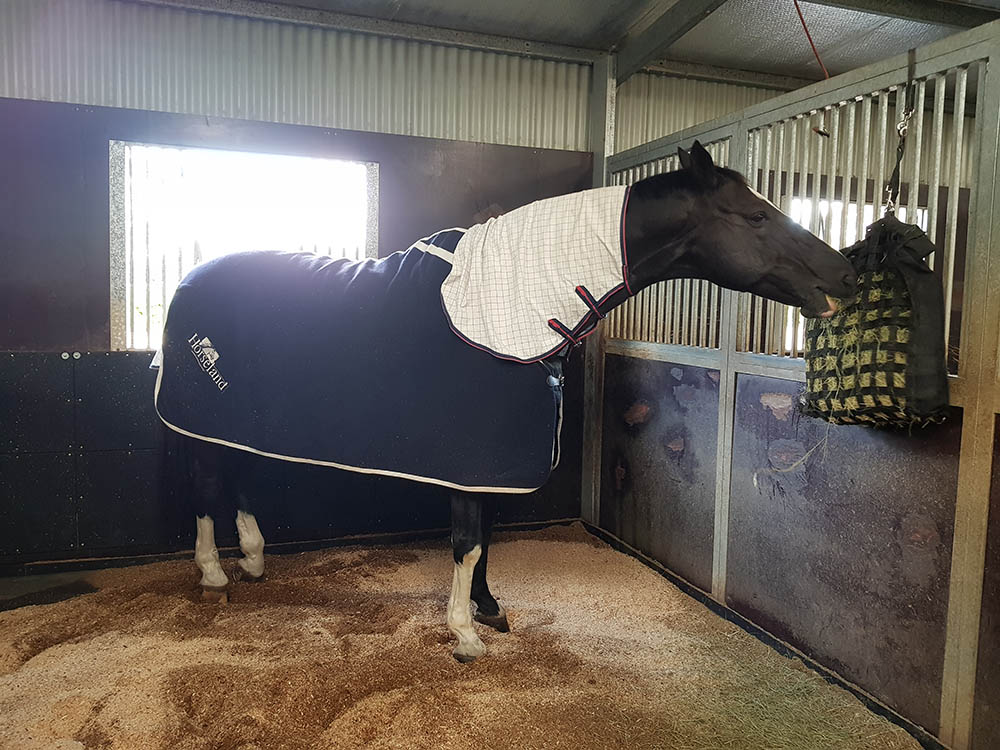 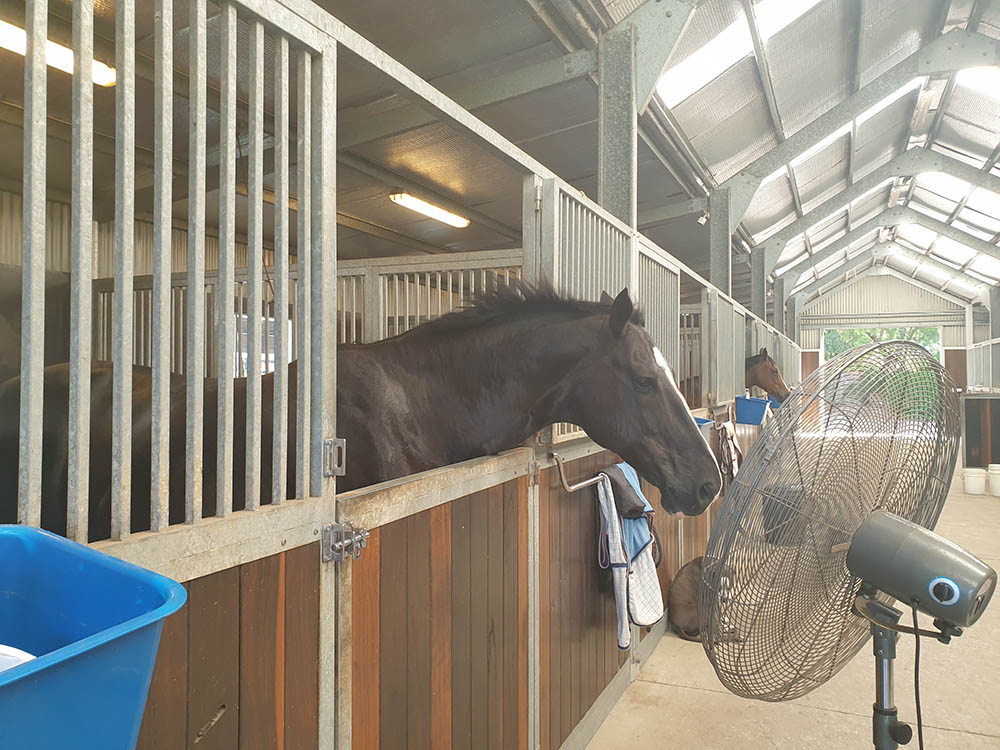 Even in retirement, Sox still beleives he's the most important horse in the stable and wants for nothing. Image supplied by Kate Taylor-Wheat.

LOVED TO BE WORKED

Sox was a horse that had always been stabled at night and let out into a small grass paddock during the day. So, when he was retired this routine continued. He was a bit out of sorts not being tacked up and ridden as he loved to be worked. He remained rugged and shod all round and the only additive he was on was Rose-Hip Vital. (Kate says that if she stops this even now, he becomes really uncomfortable and hardly moves around the paddock). His hard feed was decreased and slowly changed to a low sugar feed and the time he spent out was slowly increased.

Even in retirement, Sox still beleives he's the most important horse in the stable and wants for nothing. Image supplied by Kate Taylor-Wheat.

He is always bathed and properly groomed every week without fail, and being the type of horse that was a “Kate-only kind of guy” it was hard as the grooms could not catch him; Kate would have to come out and he would walk up to her and put his head in the halter! He still is very big in character and is seriously Kate’s horse and doesn’t like anyone else doing things with him. He is very well loved, and of course the whole attachment is quite sentimental as this was the horse that Kate’s father bought her and what a star he proved to be. His joints are still great but his soft tissue injuries really took a toll; with such huge movement it does take its toll and with all his other minor issues he is a bit of a special case.

He still gets treats every day and he will never be seen standing in the rain. His shelter shed has bulk shavings in it as he insists on spending a lot of time in there. In his old age he is still important and he demands Kate’s attention whenever he catches sight of her. He is a good doer so it’s important that the weight is kept off him as his joints and ligaments are better without a bulky old man on top of those legs.

World Star has certainly deserved his retirement and he still thinks he is the most important horse on the farm. He is never one to like any other horses – he looks down on them all. He thinks he actually is human and demands that respect. What a horse, what a life! EQ