The newest version of Black Beauty updates the inspirational classic by setting it in contemporary America – yet it was filmed in South Africa and relied on a key Australian connection.

“There were four main
Beauties – all off-the-track
four-year-olds.”

Its full title was Black Beauty: His Grooms and Companions, the Autobiography of a Horse. Written in 1877 by Anna Sewell it became an immediate bestseller. Although regarded as a children’s novel, Sewell did not write Black Beauty specifically for young people. She said the purpose of her work was “to induce kindness, sympathy and an understanding treatment of horses”.

More than 50 million copies have been sold around the world.

Inevitably, when a book is popular there are filmmakers keen to transfer that bestseller to the silver screen. The first attempt was a black and white silent movie in 1921. Only four of the seven reels exist today, which are probably more than enough. Since then there have been seven feature films, a mini-series, an animated version and even a live production that toured the UK in 2011.

The latest adaptation now showing on the Disney Channel comes from Ashley Avis, who directed, edited and wrote the screenplay. In this contemporary remake the horse is a mustang mare born in the American west, captured and taken from the herd. Jo Green, a 17-year-old girl grieving the loss of both of her parents, is healed by the horse-human bond. It stars Kate Winslet voicing the inner thoughts of Black Beauty, Mackenzie Foy as Jo and Iain Glen as a horse trainer.

The movie was shot last year around Cape Town, in the wine region of Stellenbosch, and the red rock country of Piketberg in the foothills of a low mountain range in the Western Cape. The horses were sourced by Elbrus Ourtaev, formerly a Cossack rider with the Moscow State Circus and now based in South Africa.

“I got involved with the film industry as a stuntman then started a company called Film Equus,” says Elbrus, who is also a martial arts trainer. I was working on the series Troy: Fall of a City before becoming the horse coordinator on Black Beauty.”

Elbrus would send photos and footage to Cody Rawson-Harris in Australia who had been hired as the film’s liberty horse trainer having been recommended by Bill Lawrence, a leading American movie horseman.

“Earlier in the year Bill, who was in China, had given me a job in Turkey working on a film about a racehorse,” says Cody, who is a second-generation animal trainer. (His parents Heath Harris and Evanne Chesson have been involved in the movie industry since the seventies).

“I selected the Black Beauty horses via this virtual sourcing program, and I liaised with the director (Ashley Avis) who I was yet to meet in person. When I arrived in Cape Town from Sydney, the horses were all in one place.” There were four main ‘Beauties’ – all off-the-track four-year-olds. (Jenny, Rosie, Spirit and Awards). Jenny was a true black while the others were dyed and all had painted-on stars.

Cody had to assess the environment, ensure locations were horse-safe, meet with cast and crew and, generally, get a move on. He had only six weeks before the filming of some liberty pre-shoots, which the producers wanted to use as incentives to attract more funding.

“Training horses for movies is different to training them for live shows – it has to be very precise,” says 48-year-old Cody who first worked on a film set when he was seven. His parents had been the animal wranglers on The Earthling (1980) starring William Holden. 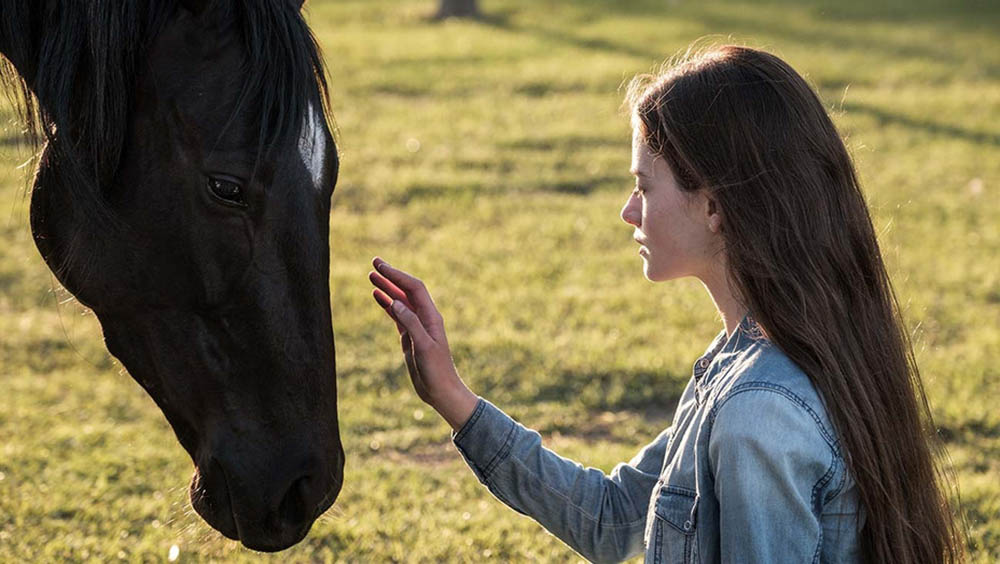 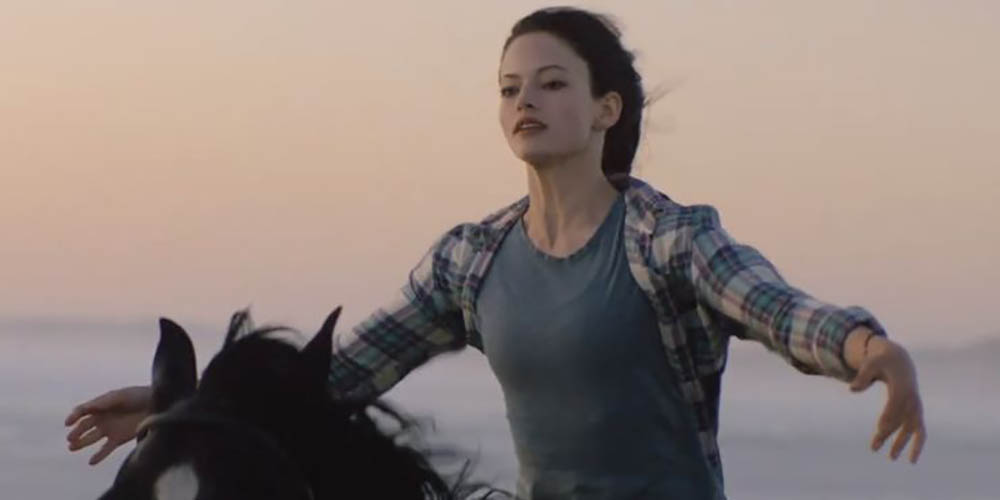 Mackenzie in the 'no hands' beach scene aboard gelding 'Indiana'. 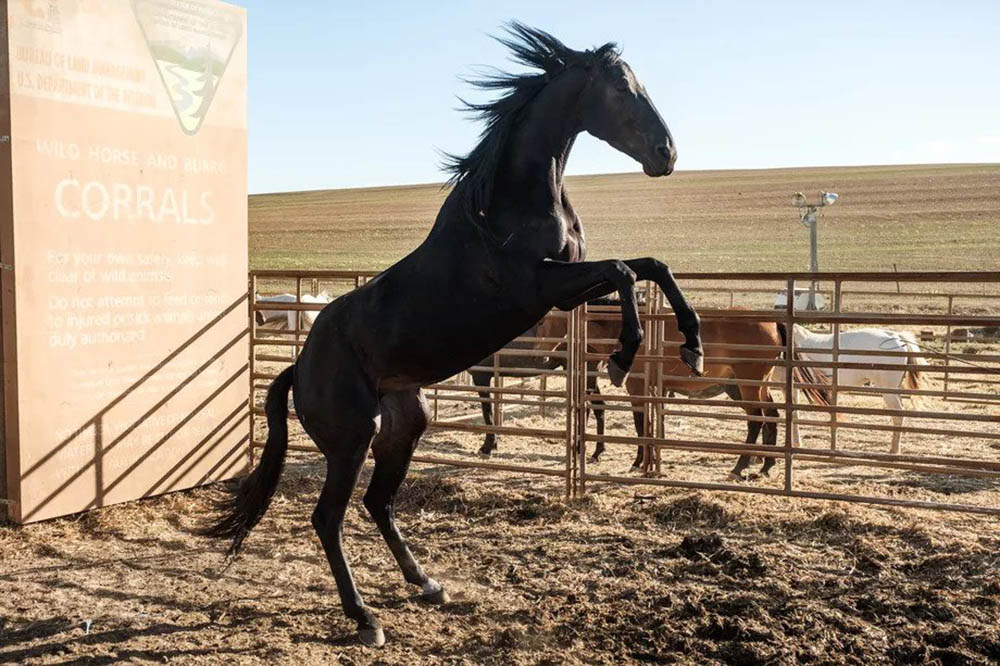 The contemporary remake is set in the American West, rather than 19th-century England as per the book and past movie adaptions.

“Mackenzie Foy was
a true professional.”

Over the years Cody has supplied and prepared all types of livestock for commercials, TV series and features. He has trained many different animals and taught actors how to convincingly interact with these creatures. And Cody continues learning from his peers as he develops into one of the finest liberty horse trainers in the international film business.

Dealing with international stars can sometimes be a nightmare. They can be moody, precious and demanding, but Black Beauty’s leading actors were a pleasure to work with. “Mackenzie Foy was a true professional,” recounts Cody. “She trusted you 100%. She, like all the other actors, worked mostly with Jenny, who was a quiet mare we had taught to lie down, she didn’t do much rearing.”

“She connected with my emotions and I loved her the most,” declares 20-year-old Mackenzie Foy, who rode a different horse for the important beach scene where she gallops along the water’s edge with her hands in the air.

“We were under pressure to get it right the first time,” says Cody. “Jenny was unsuitable as she had never seen a beach and kept looking at the water. Instead, we used Indiana, a gelding who was familiar with that environment. I rode in front of Mackenzie, on a Quarter Horse called Magnum, talking her through the action. If Indiana looked as if he were going to take off, I could move in.” 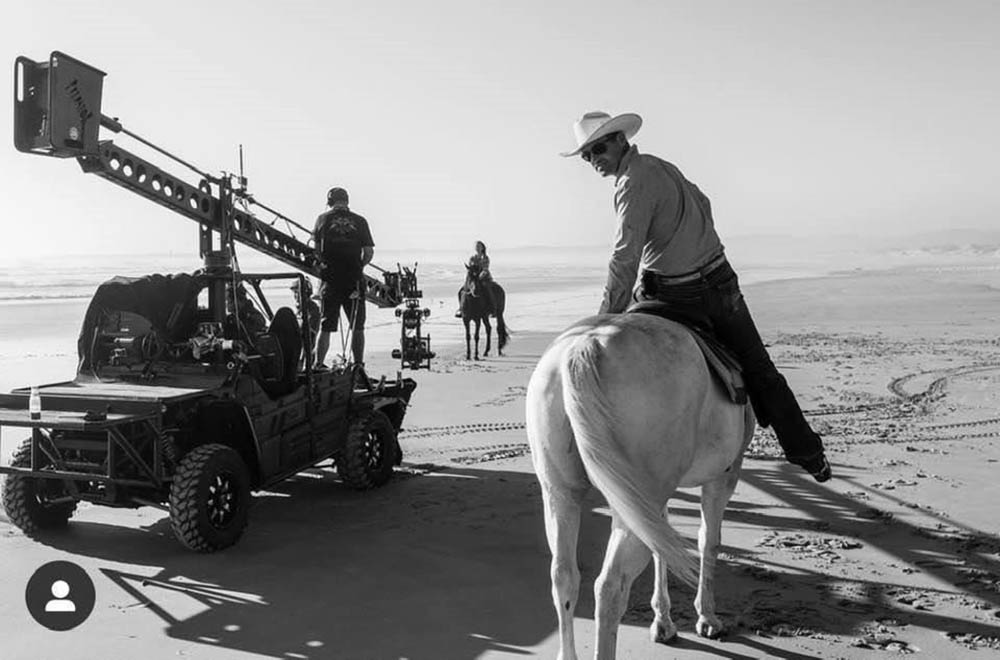 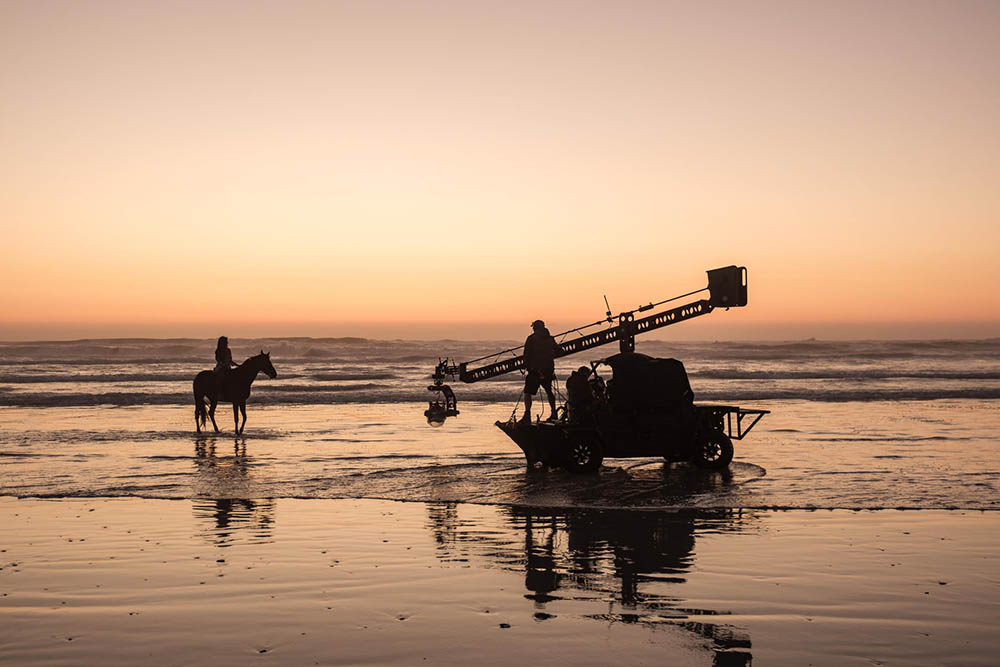 Two tracking vehicles were required when shooting the beach scene.

Galloping on the beach during a perfect sunset. 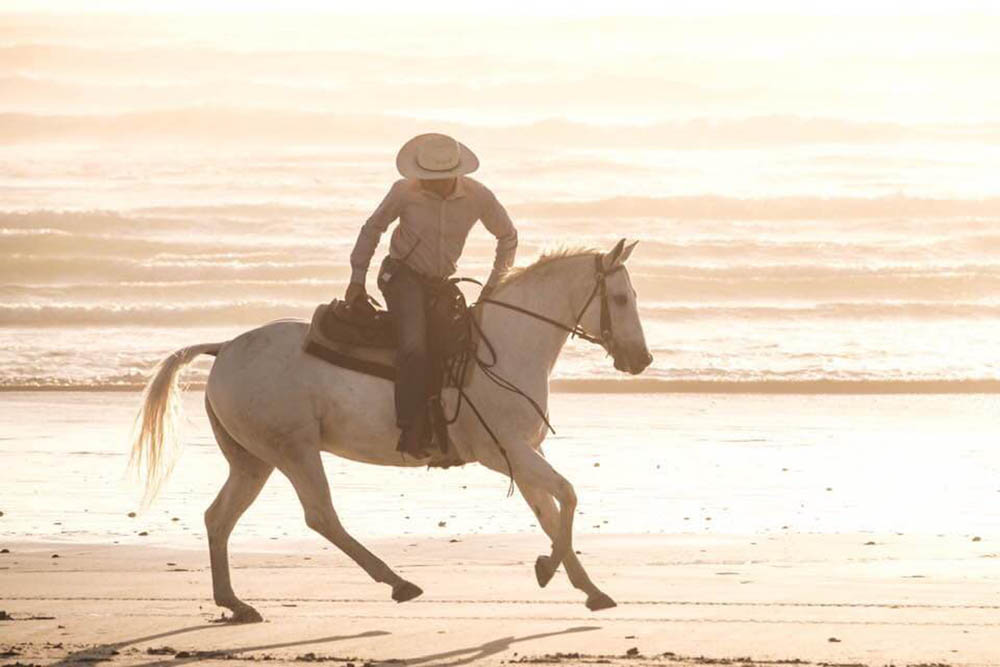 Cody and ‘Magnum' rode ahead and led Mackenzie and 'Indiana' through the action. 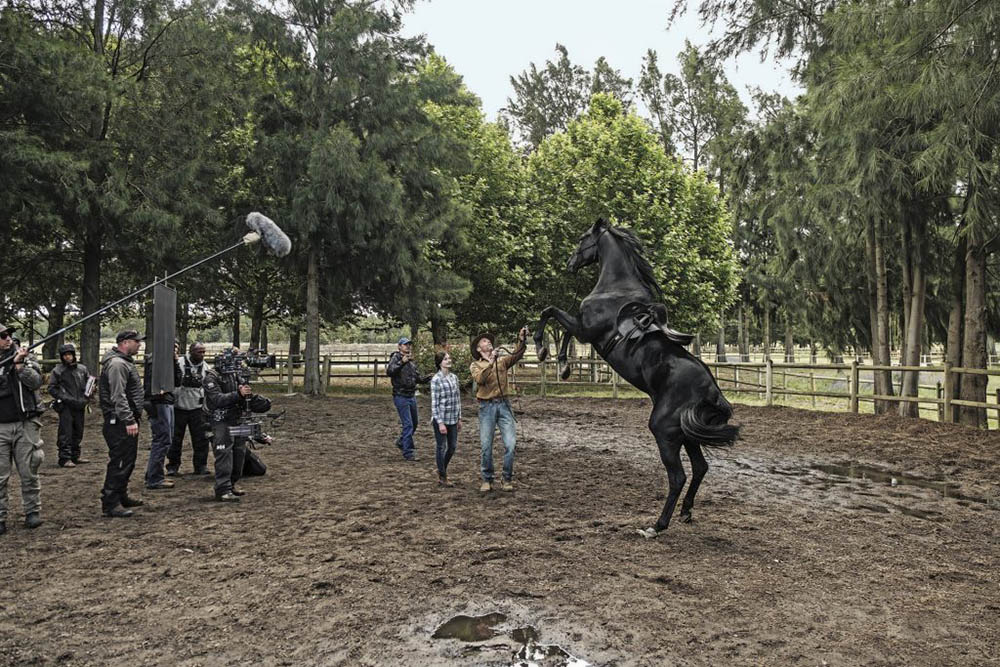 Behind the scenes on the film set. 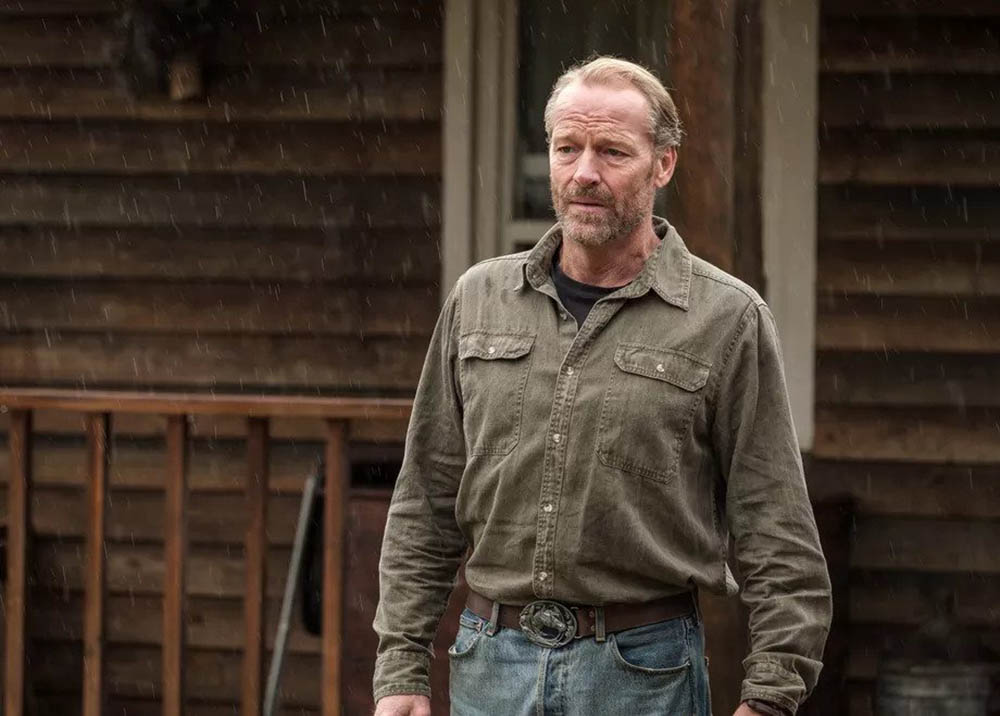 “A moment that pretty much
every little girl dreams of.”

Director Ashley Avis explains the emotionally-charged scene: “This sequence is very much a homage to the one in The Black Stallion (1979). We only did it once. We had two tracking vehicles following Mackenzie, and when she releases her hands from the reins — at a gallop during a perfect sunset, which we specifically timed — you see this moment come across her face which is so real. It’s the fear of letting the reins go on a horse moving at top speed, but then the joy crosses her face as her arms go up like she can fly. A moment that pretty much every little girl dreams of. That just comes across so beautifully in the movie.”

The film’s other leading actor, Iain Glen, didn’t have to undertake such high-speed manoeuvres but he did have to appear as if he knew about handling and training horses. As the exiled knight, Ser Jorah Mormont, he had ridden regularly in Game of Thrones, and also had a vicarious involvement with equines when narrating Ulrich Raulff’s Farewell to the Horse on BBC Radio. This brilliantly written book, published in 2017, is a cultural history documenting all the ways in which our world has been made by the horse.

Cody recalls the first day he worked with the actor. “I taught him how to get a horse to ‘join up’ or, as Buck Brannaman would say, ‘hook on’.” (According to horsemanship expert Monty Roberts, ‘join up’ is that moment when the horse decides it’s better to be with the person than to go away. ‘Join-up’ can be achieved with all horses of any age or background.) “To put it simply,” states Cody, “it’s getting them believing in you.

“Iain was a serious professional. He’d read his script for the day and then come and ask my opinion about some of the dialogue. Sometimes I’d suggest he approach the director and request a few changes so it would sound more authentic. 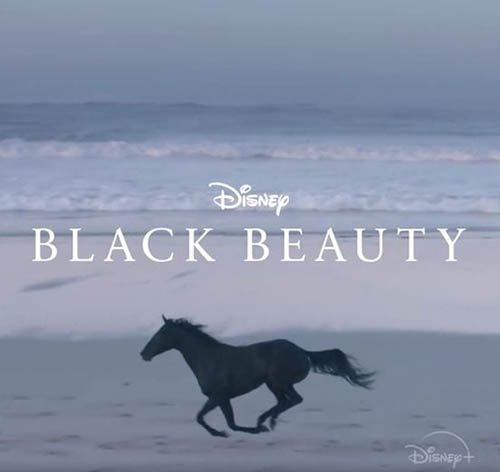 The new remake of Black Beauty is available via the Disney Channel. 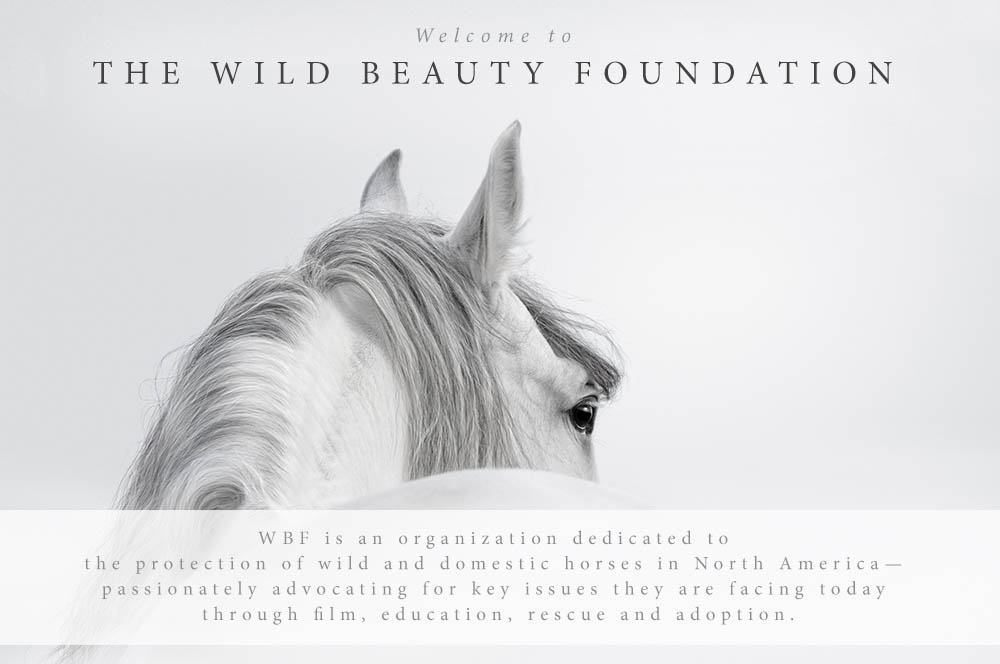 “Anna Sewell would
be very pleased.” 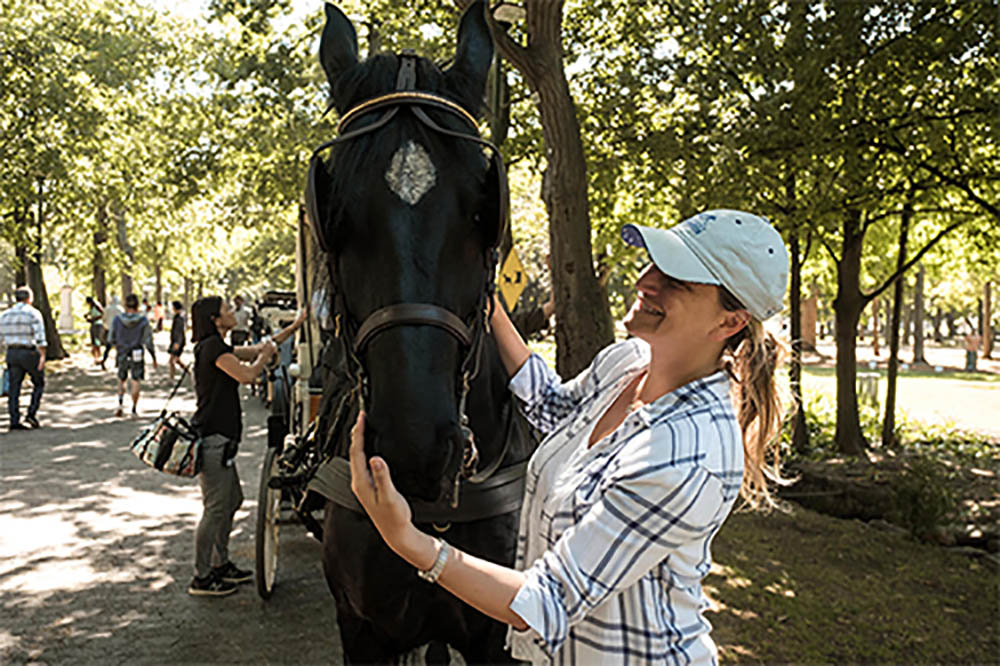 “The horse he had to ride had a mouth of iron at the beginning but we got him softer, neck-reined him and made him suitable for Iain to steer him with one hand.”

Iain Glen is very appreciative of Cody’s care and attention. “He kept a really close eye on me, he was indispensable,” says the 59-year-old actor. “Before every horse scene he’d go through all the action. He made this picture so enjoyable to be part of, it was great going to work each day.”

One of the less enjoyable days for Cody was filming in a yellow field of canola. “It was a very hot day, we’d done a couple of the liberty runs and then my eyes began stinging and my vision went peculiar. I imagined headlines like: ‘First day of shooting Black Beauty – horse trainer goes blind!’ They pumped saline into my eyes and slowly things began to improve – apparently I have an allergy to canola pollen – thankfully it didn’t affect the horse.”

Apart from a few hiccups the production was accident free. Each night the horses were stabled and cared for by a team of grooms, all stayed in good shape and at the end of filming were taken to Elbrus Ourtaev’s property in George about seven hours from Cape Town.

“It was a great experience,” says Cody, who remains in contact with director Ashley Avis, whose interest in horses is not limited to making features about them. She recently founded the Wild Beauty Foundation dedicated to the protection of wild and domestic horses in North America through film, education, advocacy and on-the-ground rescues and adoptions. Cody is one of its ambassadors.

“When researching Black Beauty I came across the issues wild horses are facing in our country today,” explains Avis. “How they’re rounded up by low-flying helicopters, taken away from their families and placed in permanent holding facilities which often don’t even have shade. How healthy young horses, mares and foals are sent away across our borders to unimaginable fates in Mexico and Canada.”

One of her foundation’s aims is to sponsor educational programs for children and young adults. “Later we hope to open our very own California-based headquarters and horse sanctuary,” adds Avis, “where we’ll do special screenings, events, school tours and continue our ongoing rescue and adoption program.”

Anna Sewell would be very pleased.

Next month in our Horses and Movies series: Phar Lap. EQ