MAREE TOMKINSON:
NO TIME FOR MEDIOCRITY

A QUICK GUIDE TO CASTRATION

GETTING OUT & ABOUT WITH DAN STEERS

YOUNG RIDERS IN THE SPOTLIGHT

DIAMOND B CONTINUES TO PRODUCE GEMS

REDFORD TURNS UP THE VOLTAGE

The words ‘Longines Global Champions Tour’ immediately conjure up images of beautiful, historic and often exotic locations where show jumping’s elite athletes compete. To non-equestrians, I describe it as the Formula 1 of show jumping. 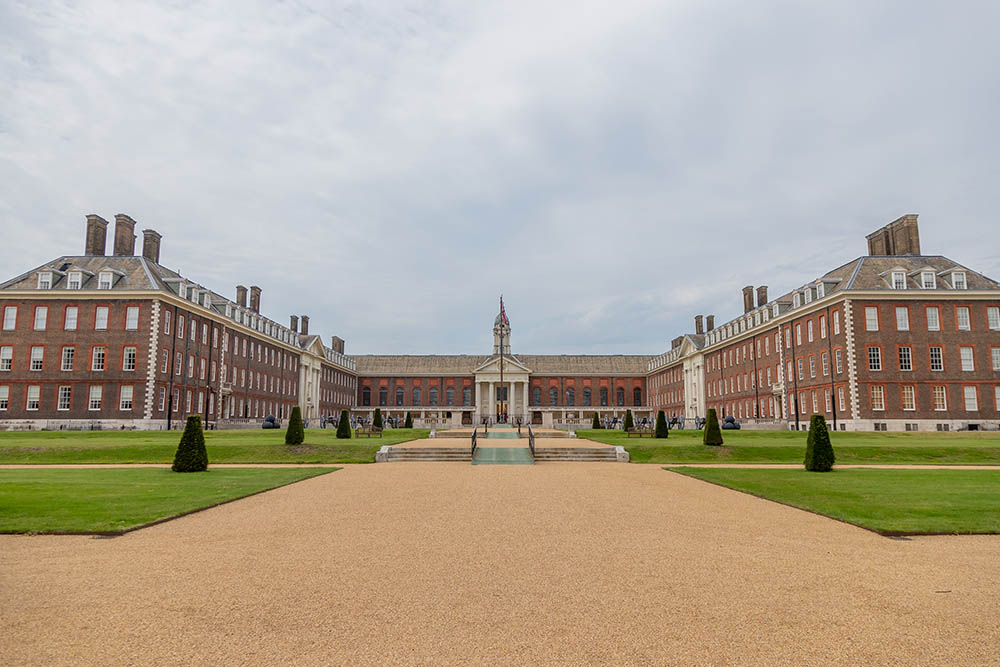 The Royal Hospital Chelsea provides the backdrop for the London leg of the Global Champions Tour. © Elli Birch/Boots & Hooves Photography
Click here to find out more about 4Cyte’s range.

The Longines Global Champions Tour (LGCT) is the brainchild of Dutch businessman and show jumper Jan Tops. The inaugural LGCT was held in 2006 and has gradually evolved into an extravaganza that offers fantastic sport, top hospitality and superb spectator experiences at every location around the world.

Jan himself rode at the top level of the sport and represented the Netherlands at four Olympic Games, winning team gold in Barcelona in 1992. Jan certainly understands what does and does not work for the sport. Although they are branded as 5* events (under FEI rules 5* is a championship-level event) the FEI plays no part in organising the shows apart from approving the schedule.

In August of every year the LGCT lands in London, England, for three fantastic days of glamour, glitz and great top class sport. A number of locations around the city have hosted the London leg of the tour; in 2017 the tour settled at the Royal Hospital Chelsea — home to the illustrious Chelsea Pensioners (retired soldiers of the British Army) and the location of the famous Chelsea Flower Show. This year, 2021, is the fourth year that the London leg has been held at the Royal Hospital boasting a stunning backdrop of buildings designed by Sir Christopher Wren. The Royal Hospital has provided care for army veterans since 1692.

Upon entry to the show, you are greeted with a river of red carpet that leads past the iconic blue Longines horse statue and up the steps to Global heaven — aka the hospitality lounge! If you are not lucky enough to have a table in ‘heaven’, there is no need to worry as the views from the public stands are fantastic and offer you the perfect opportunity to feast your eyes on the superstars as they soar over the fences, some of which are quite quirky.

In addition to the white and navy Longines-styled fences, many of the wings and fillers give a nod to the host country in a really fun way. Big Ben, Tower Bridge, teapots, English roses, ballet dancers, shields and the London skyline fences were featured in all the classes. There are plenty of trade stands selling all sorts of classy apparel for you and your horse; some very tempting eateries and a buzzing bar that is perfect for people watching throughout the day. 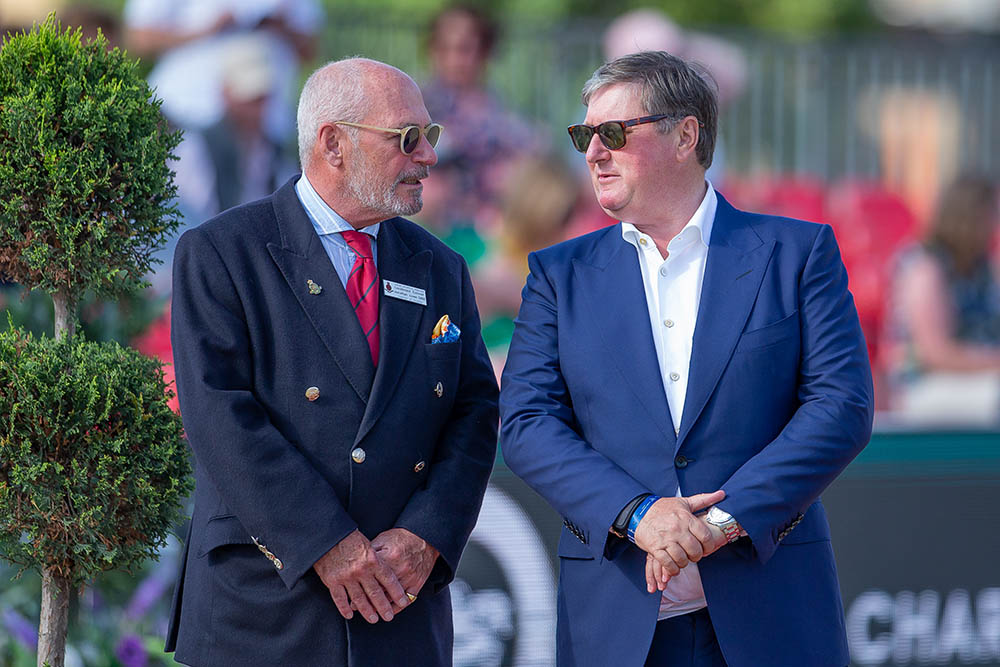 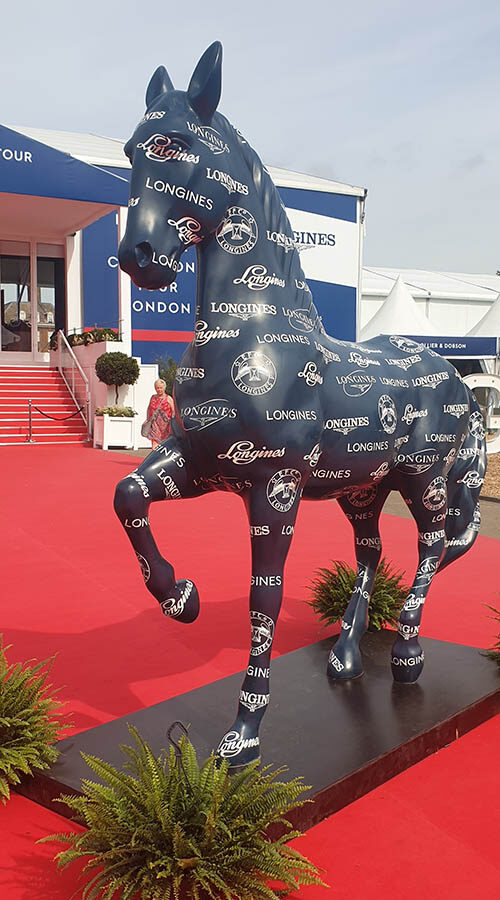 Upon entry to the show, you are greeted with a river of red carpet that leads past the iconic blue Longines horse statue. © Elli Birch/Boots & Hooves Photography

In addition to the CSI 5* classes, there are a number of CSI 2* classes for some of the lucky national riders and the rising stars of the international show jumping world. As well as competing as individuals, riders from a multitude of nations make up teams for the entire season and compete in the Global Champions League at each location. The teams are named after the cities on the tour and consist of six riders, one of whom is under the age of 25.

Teams of two (of the six) horse and rider combinations compete at each location over two days. The teams have their own badge and colours — jackets for the riders, saddlecloths and ear bonnets for the horses. The London Knights were the popular home team and were greeted with enthusiastic cheers as their walk-on music (or maybe that should be trot-on music) announced the team as they entered the arena to jump.

Like many other shows and events, LGCT London did not take place in 2020 due to the Covid-19 pandemic. It was with great excitement that show jumping fans and supporters flocked to see the jumping stars — both two and four-legged in 2021. Just one week earlier, many of the riders had been at the Tokyo Olympics and it was a real treat to see some of the show jumping medallists competing in London, too. The horses and riders competing at LGCT London 2021 really were akin to a “who’s who” of the show jumping world.

The icing on the cake for many spectators was the appearance of the newly crowned individual show jumping gold medal winners — Team GB’s Ben Maher and the superlative Explosion W. On the Sunday afternoon of the show, they paraded with their medal; Explosion behaved impeccably and appeared to soak up the adoration from the crowd as he cantered a lap of honour in front of his owners, groom and what felt like all of the Ben Maher fan club! Ben and Explosion are no strangers to the show; they won the Grand Prix of London at LGCT London in 2019.

As well as Ben Maher, Sweden’s team gold and individual show jumping medallist Peder Fredricson was in attendance with two horses. Peder’s purple patch continued in London, when he won the Grand Prix, taking home the €99,000 purse riding Catch Me Not S. Peder previously won the Grand Prix of St Tropez gaining his ticket for the Super Grand Prix in Prague at the end of the season; so the “golden ticket” this time went to runner-up John Whitaker of Great Britain, always a favourite with the London crowd. (Peder Fredricson has since gone on to claim the overall 2021 LGCT championship). 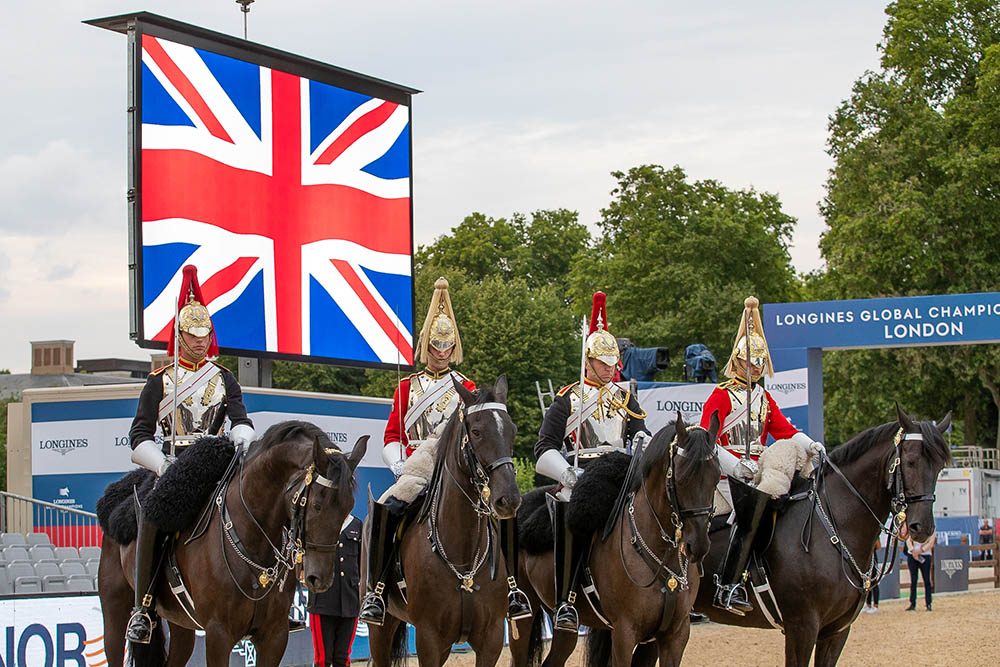 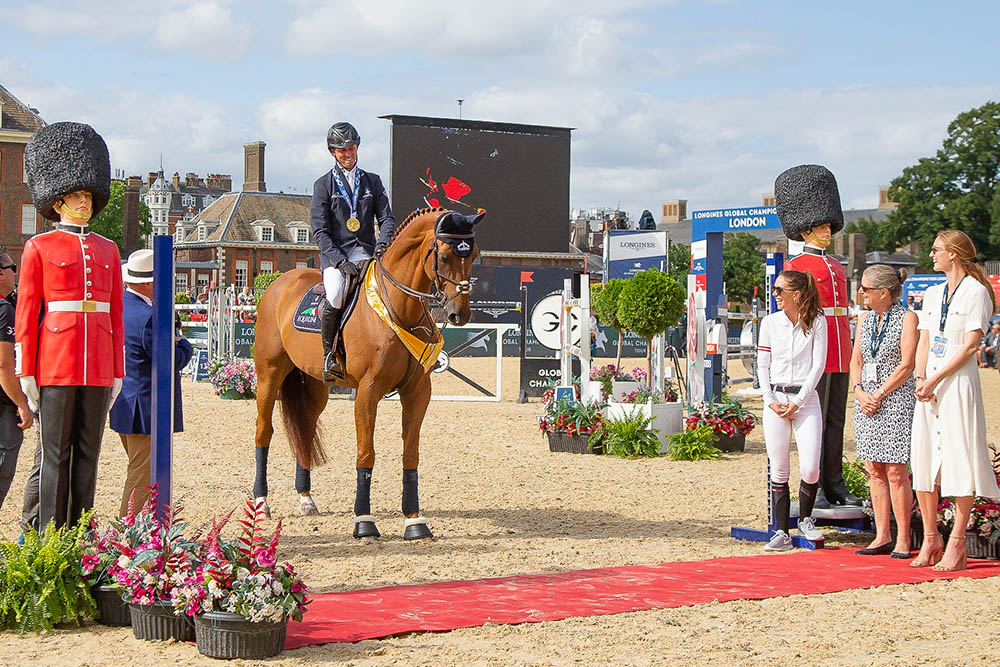 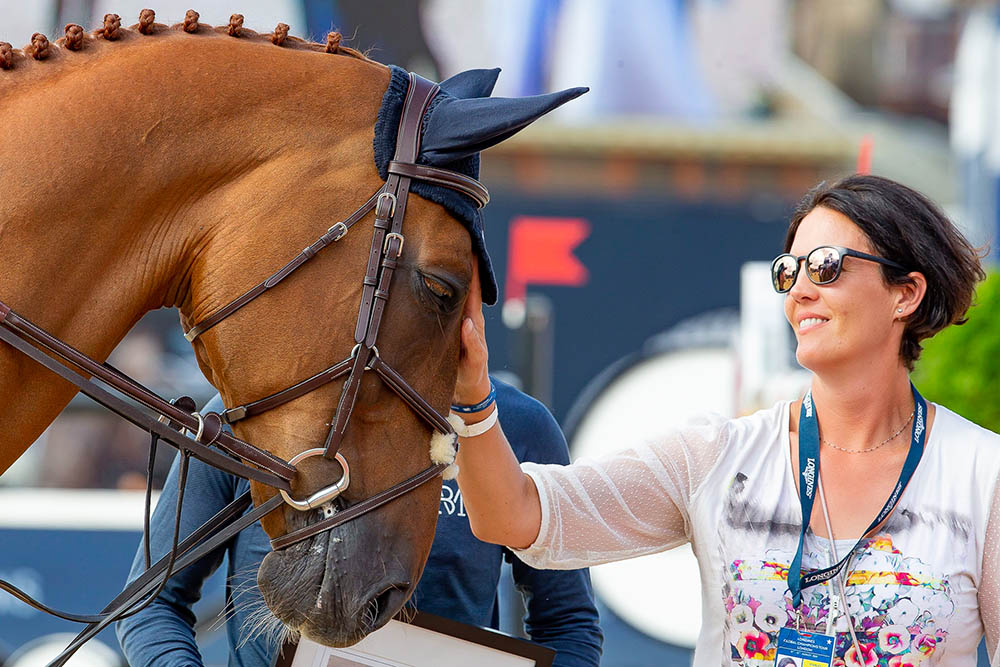 A. Newly crowned individual show jumping gold medal winners Ben Maher and Explosion W made an appearance. B. The crowd was thrilled to get up close and personal with Explosion W. © Elli Birch/Boots & Hooves Photography. 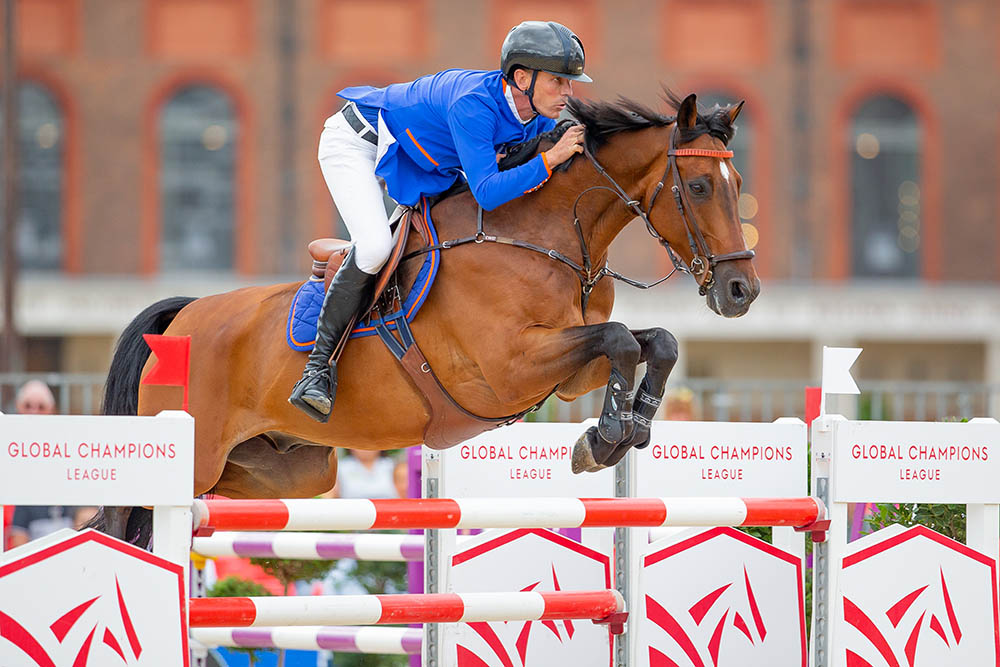 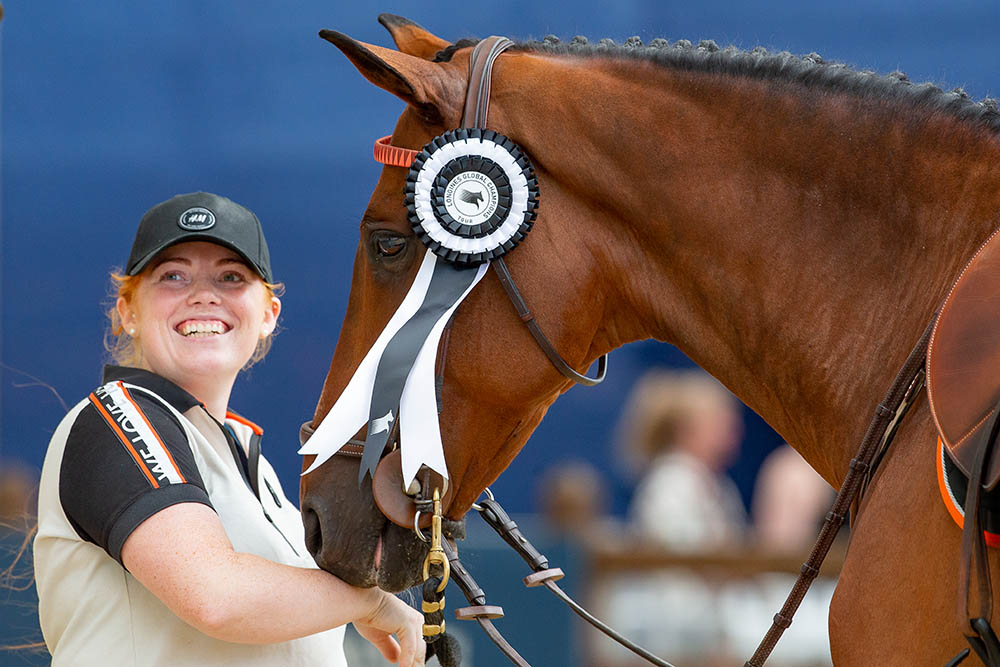 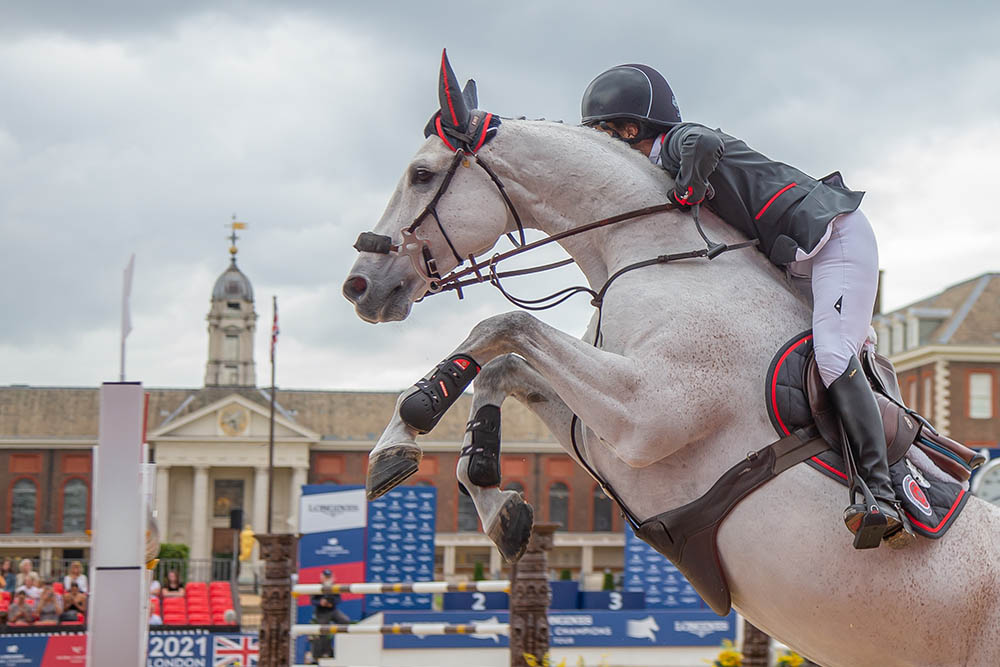 It was great to have the opportunity to catch up with Australia’s Edwina Tops-Alexander while in London. Edwina, wife of LGCT founder Jan Tops, was one of the athletes who had come to London from the Tokyo Olympics. Edwina was campaigning two horses in London — 11-year-old Fellow Castlefield and nine-year-old Conisha des Forets. Although not on the team in London, Edwina is a key member of Valkenswaard United, who have since claimed the overall GCL season championship following the final leg in Slovakia, where Edwina jumped a critical clear round to seal the rankings lead. The team will now head to Prague in November for the Playoffs, which is the spectacular finale of the tour.

Despite contentious aspects surrounding the Australian show jumping team’s non-participation at the Tokyo Olympics that resulted in Edwina and Katie Laurie having to compete as individuals, Edwina’s Tokyo experience was not all bad. Edwina told me: “It was very disappointing not to field a team. I have done four World Championships and this was my fourth Olympics and I have never come across something like this before.”

Edwina went on to tell me about the new much-debated format for the Games in 2021: “The new Olympic jumping format is quite complicated. The format at all the other Olympics that I have done, where you jump the first day as Table A and then the team event, which results in the best 25 coming back for the individual. You’ve jumped your horse three rounds and it sorts everyone out; normally the best 25 do return. I think this year he [course builder Santiago Varela] built very nicely on the first day, but there were too many clear rounds, although it is hard to judge and he is a great course builder. 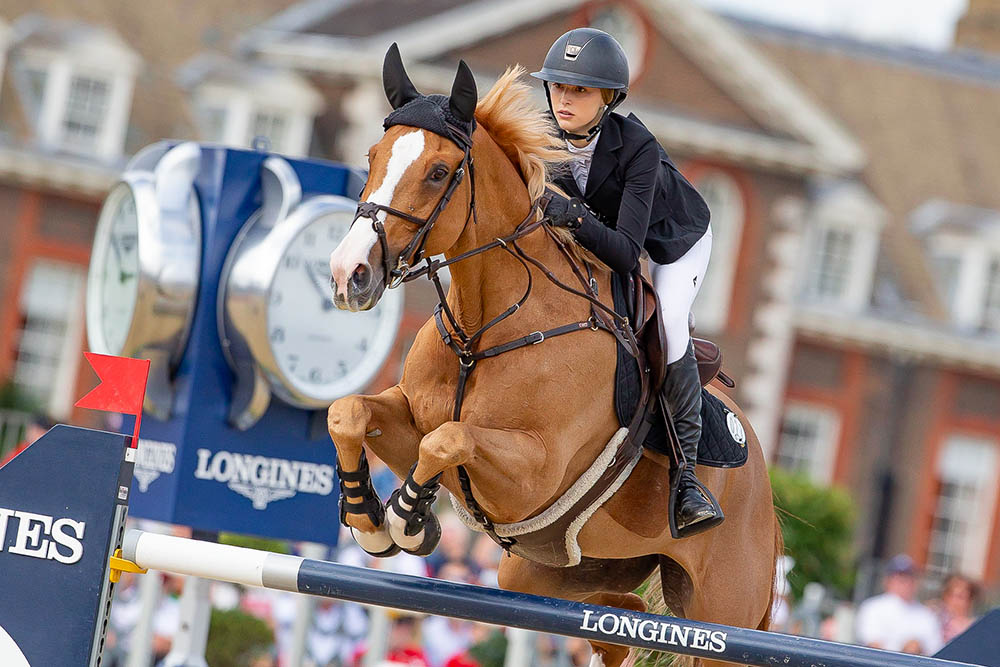 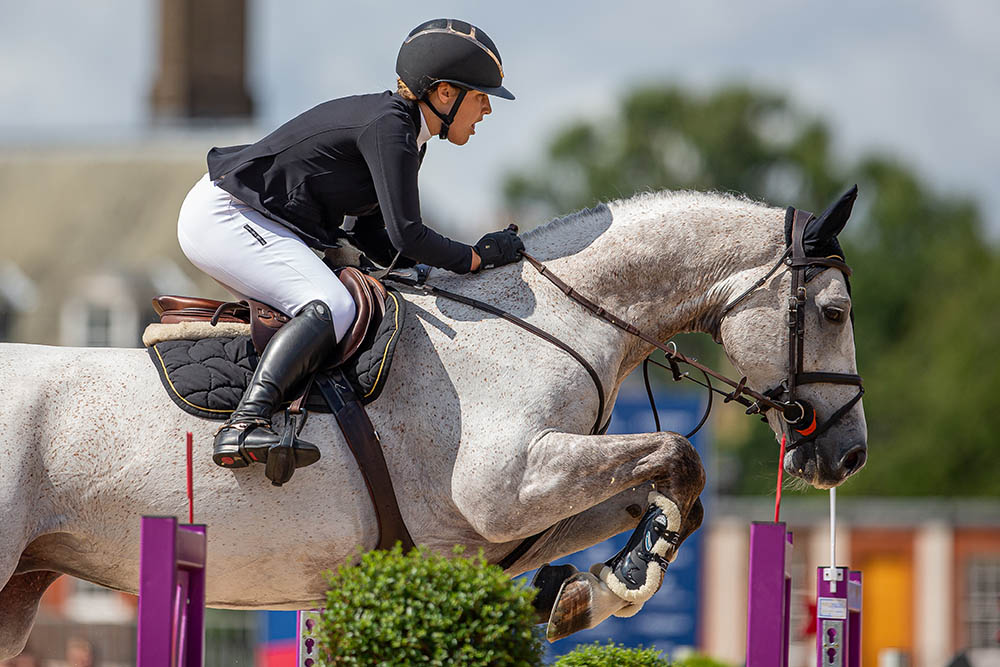 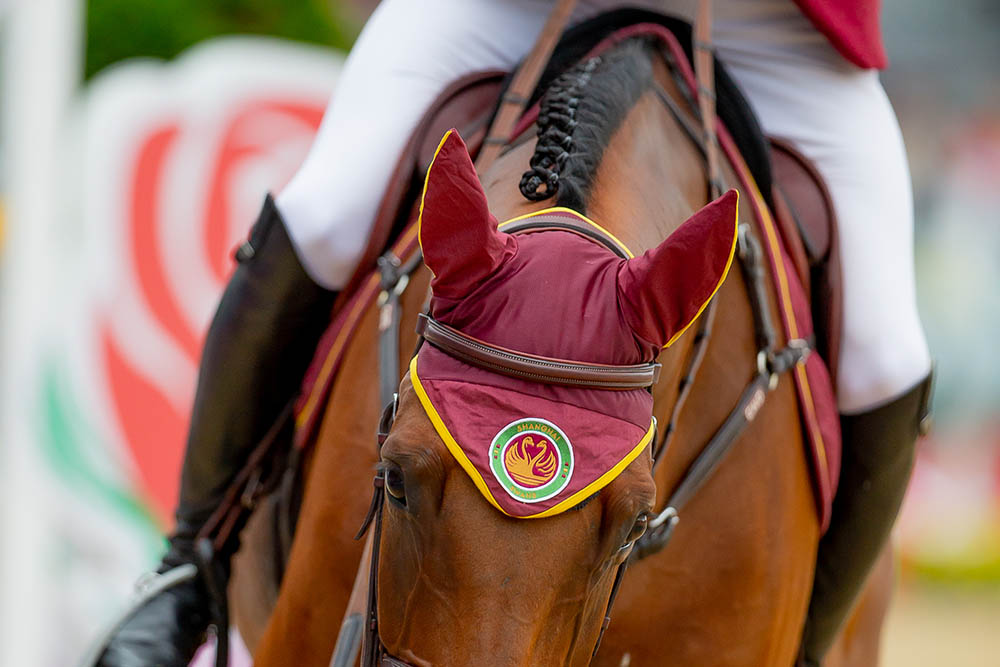 Up Too Jacco Blue, with Austria's Max Kuhner in the saddle, were part of the Shanghai Swans GCL team. © Elli Birch/Boots & Hooves Photography. 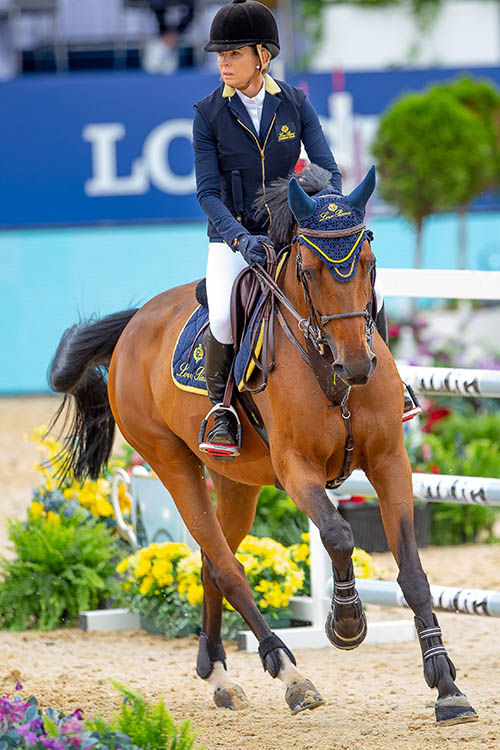 “I think that the new format [where individual medals were decided before team medals] has its pluses in the sense that you don’t have to jump your horse a lot. My horse basically jumped the warm-up and one round and that was it. Although disappointing, I would rather not jump three rounds and then not be able to come back.

“For the Nations Cup [team championship format], I really believe it should be over two rounds and the scores should count for both rounds. As much as America were amazing and I take my hat off to all of them — the riders were fantastic and it was great to watch — it was really good that Sweden won [the team gold in Tokyo], they really deserved it. I think they [Sweden and the USA] would not have had to do a jump-off if it was over the two rounds. Maybe, if the second round was a bit shorter than the first long round? I don’t know what the answer is, but I am sure they will find a way, as well as being best for the horses; this is the most important thing. Some people are very happy with the new format and some not so, but you will never please everybody!”

As well as being an international athlete, Edwina is a mother to four-year-old Chloé. I ask her: “Travelling from one competition to the next, often in three or four different countries in one month, it must be hard to get the balance right?” Edwina laughs: “It’s challenging and there are moments when it is not easy. I really don’t know how people with two, three or even four kids do it! It is about management though; every day I have a plan and a schedule and I know that is the best way for me to focus. If I know Chloé’s OK, she’s looked after and is happy, then I don’t need to worry — we are happy hippos!” 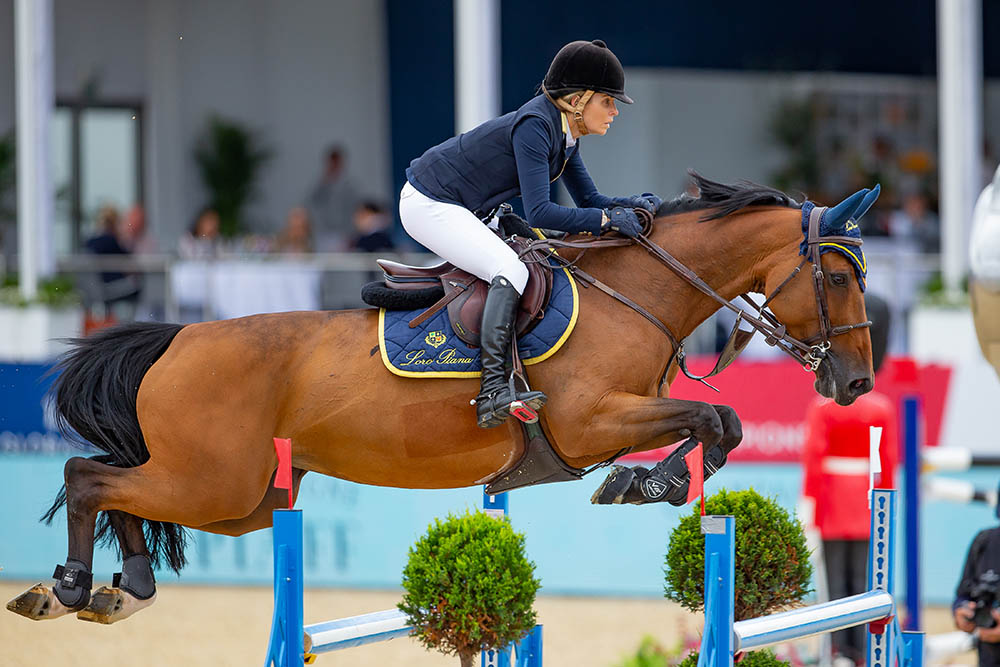 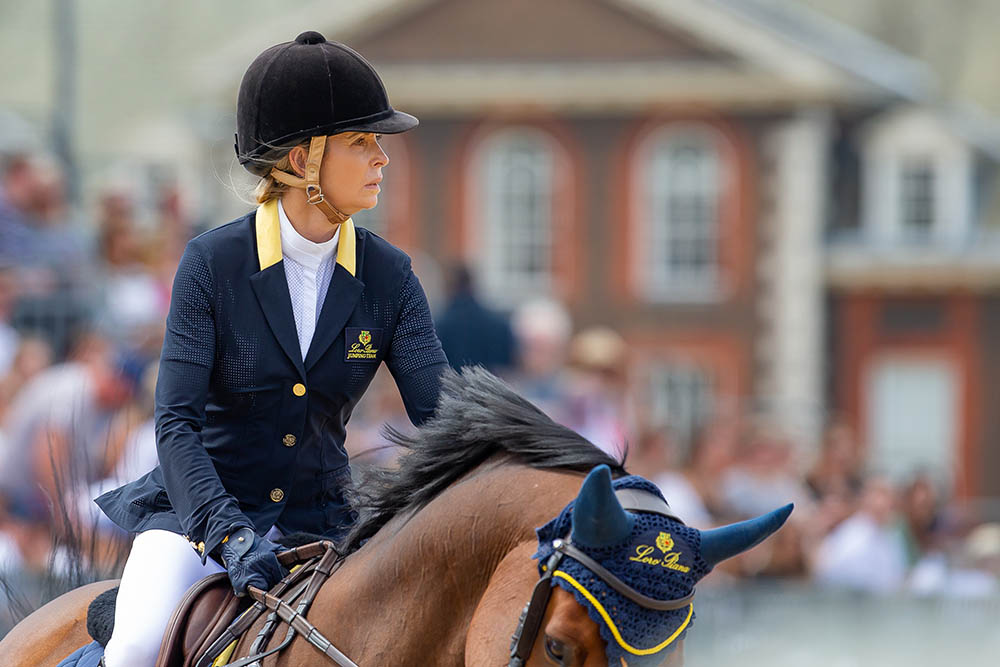 Edwina says there are pros and cons of the competition format used at Tokyo. © Elli Birch/Boots & Hooves Photography. 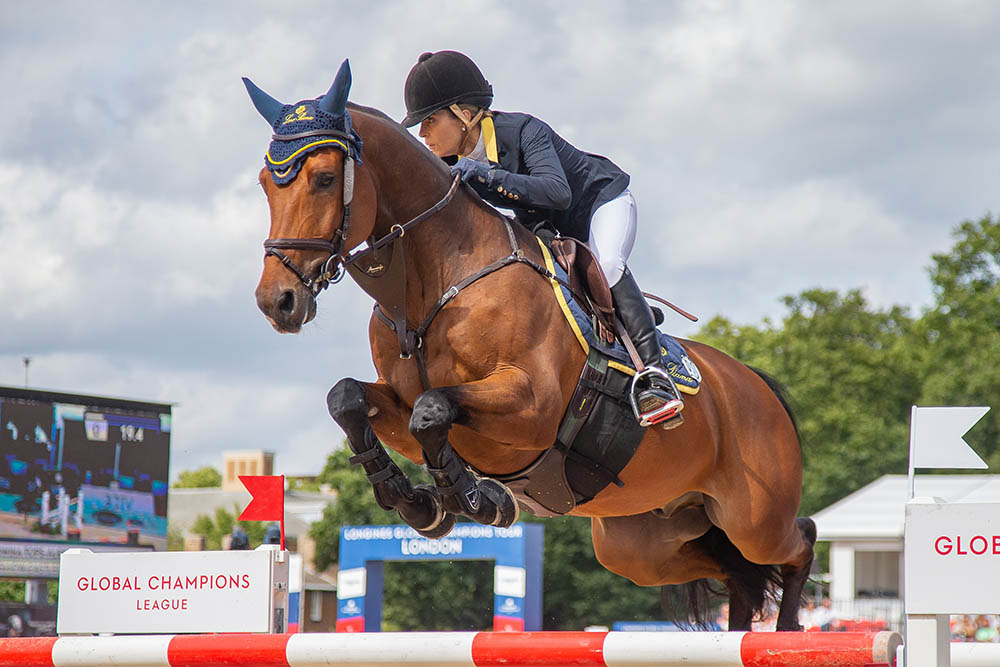 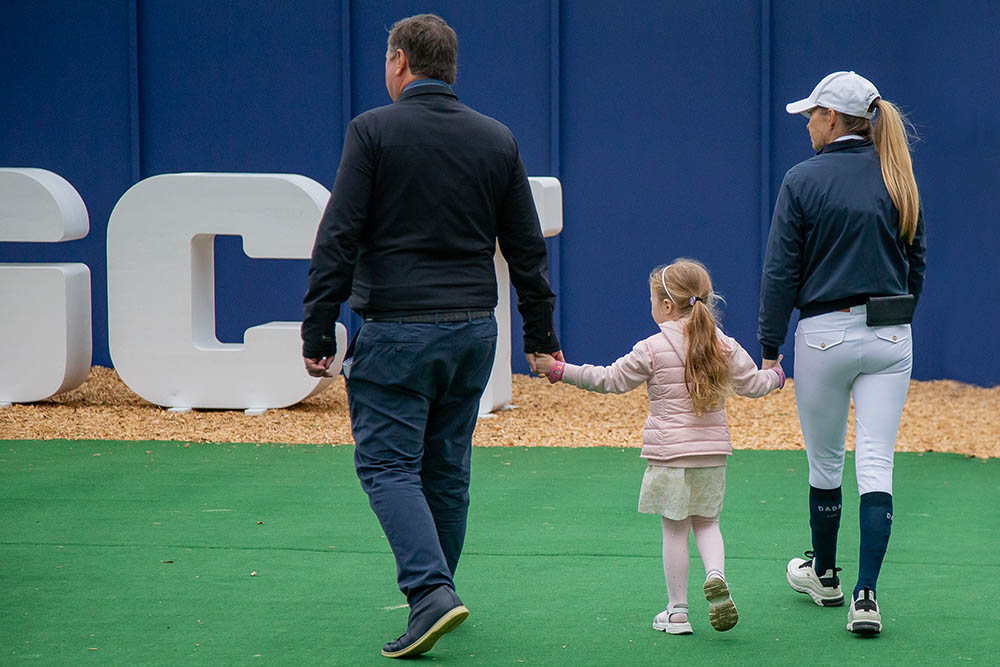 Chloé is very involved with Edwina’s everyday life as Edwina explains: “Yes, Chloé is very involved, she knows everything about all the horses and the staff — she knows their names and she knows everything that is going on; she is inquisitive, observant and very switched on.” I ask if she would encourage and support Chloé to ride: “Absolutely, whatever she wants to do, we will support her in any direction she wants to go in. I would not want her to do something that she doesn’t love or enjoy.

“Recently at a show she saw all the ponies competing and was very disappointed that she couldn’t ride, so I told her that she would have to wait until she was little older and then she can ride. When Chloé starts school things will change, but we will manage and we just have to make things work for all of us.”

We chat about her current string of horses and her plans for the next few years. “I am aiming for Paris 2024 and the World Championships next year,” says Edwina, “but let’s see what happens with the team. My two top horses at the moment are Fellow Castlefield, who is jumping amazingly well; I am really fortunate to have him from Athina [Onassis] and Identity Vitseroel. I also have an interesting nine-year-old coming up and some of my best horses are now starting small competitions.”

All in all, a visit to any LGCT really is a winning day out for all the family — spectacular location, elite sport, two and four-legged superstars, scrumptious food and first-class shopping. You never know who may be sitting next to you at the bar, enjoying a well-deserved after-show aperitif. EQ