Viggo Mortensen doesn’t like horses — he loves them! That’s why he finds it hard to resist appearing in a movie in which his character has to ride. 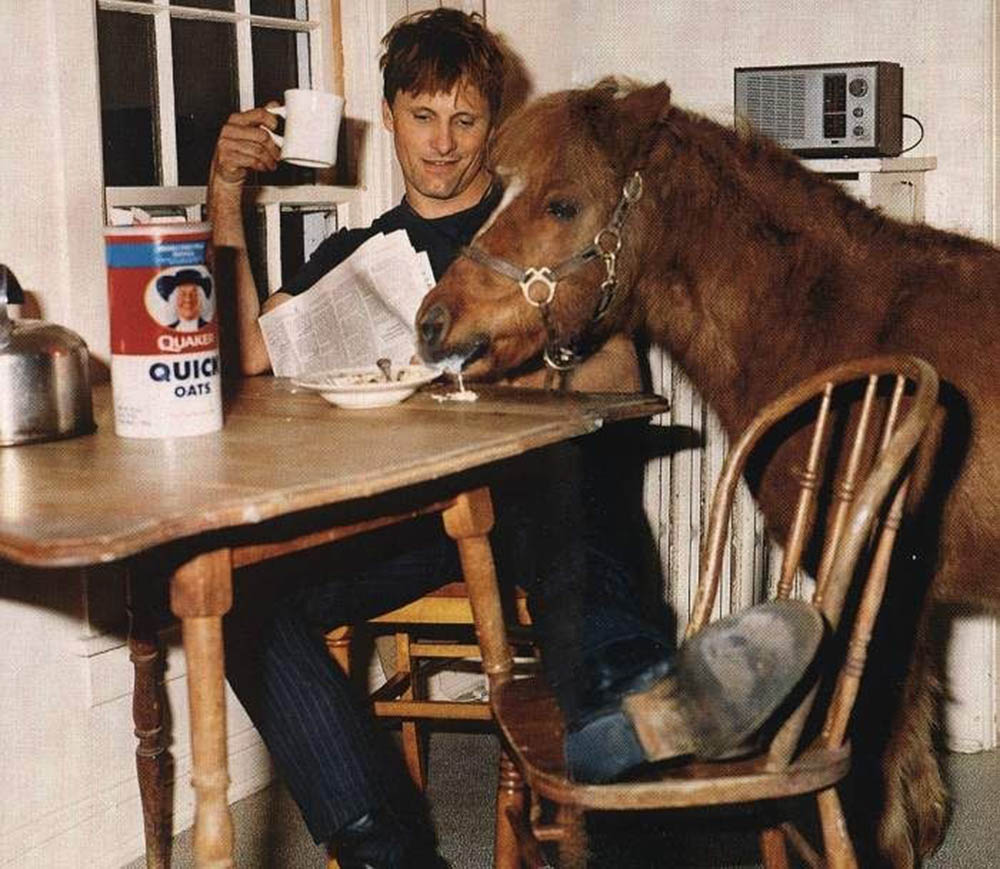 Viggo Mortensen’s affinity with horses began when he was growing up in Argentina. “I am Danish-American, in that my father was Danish and my mother American,” he explains, “but I also have Canadian heritage and spent some of my early years in Argentina. Horses are very important in the Argentine and the nation is proud of its equestrian heritage. Is it any wonder that I soon had a love of horses!

“I was very young when we moved to Argentina and we stayed until I was 11 and we moved to New York. During that time I started to spend time with horses and to ride and I just became totally into them. If anything, I am even more passionate about them now.”

That passion shows because Viggo is an excellent rider as he has revealed in some of his movies, and even more so when he is riding just for the sheer joy of it. He doesn’t just slip out of the saddle and hand the reins to someone else though.

“It is important to have a good relationship with your horse,” he says. “When you are filming you cannot often spend so much time with them on set, but I have always liked to visit the stables at the end of shooting and have some time just chatting with them, telling them how well they have worked today; maybe some grooming too, depending upon what time of the day it is. Talking to horses is like talking to humans; you need to communicate to get to know each other and often that communication is a pathway to understanding each other and then actually liking each other.”

AT ONE WITH HORSES

Perhaps that is why Viggo always looks at one with his horse no matter what the movie might be.

“Making movies is a team effort,” he says. “I have never gone for the star keeping away from the extras or the crew. We are all in it together and everyone has an important role to play, including any animals, and especially if you are going to sit on the back of that animal and trust him to gallop across the set without launching you into space.

“If there are stunt men on the team I like to spend time with them because I have a lot of respect for what they do and some of them are fantastic horsemen. I like to do my own riding stunts where possible, but because of insurances and contracts it is not always allowed. So the stunt men risk their necks and I appreciate what they can do and, of course, what the horses can do. 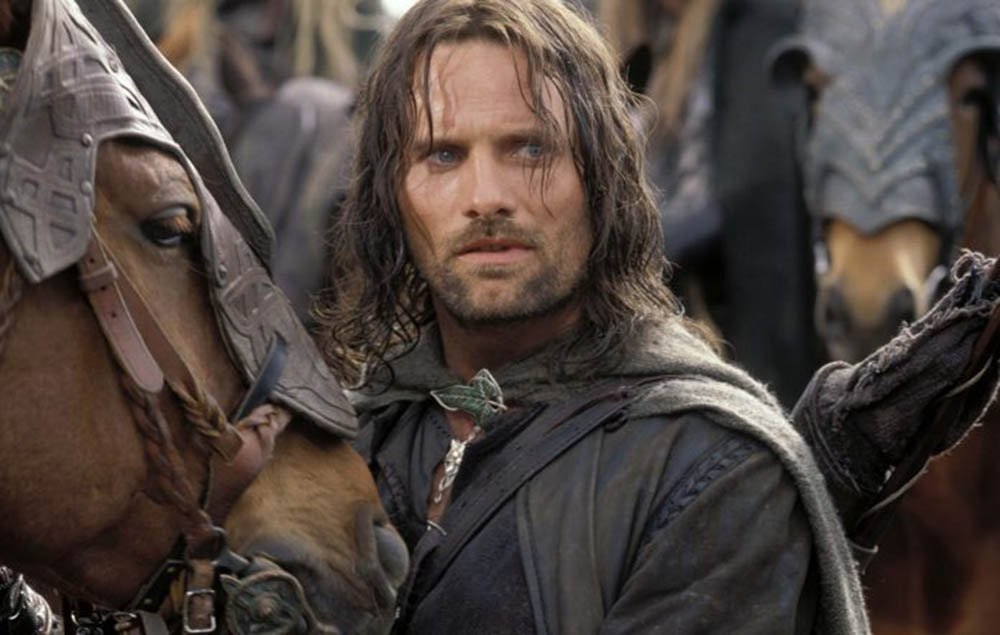 Viggo with the Dutch warmblood, Uraeus, whom he purchased following 'Lord of the Rings'. 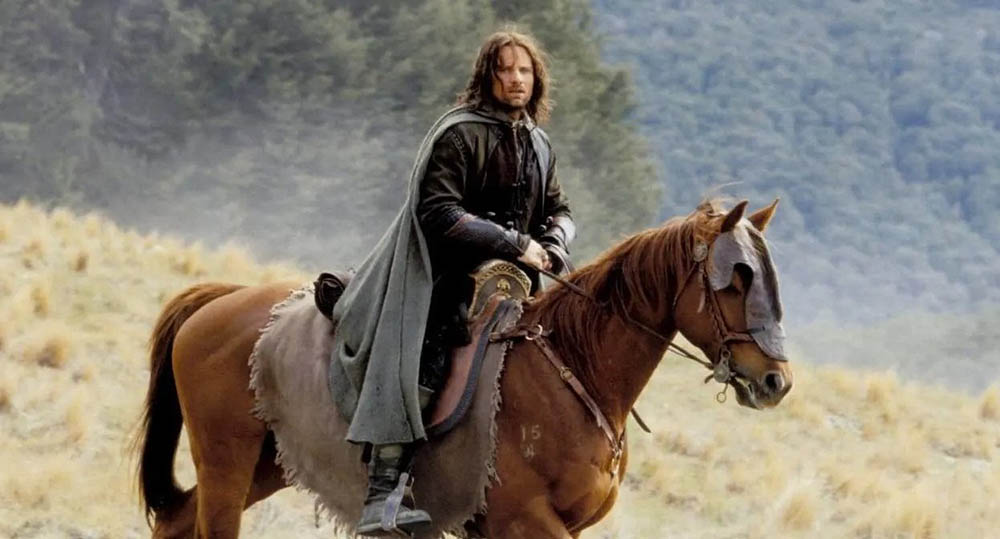 Viggo in 'Lord of the Rings'.

“Imagine what it is like for the horse. There he or she is with the ‘star’ on board for all the standing shots and dialogue, maybe even a trot or a little canter, but then when it is time to open the throttle and maybe take a few risks the ‘star’ is nowhere to be seen. To add to the horse’s confusion there is a stunt guy or girl on board prepared to go totally crazy for the sake of the movie. Is it any wonder horses sometimes look confused? They have more sense than we do.”

Although he has starred in countless movies, Viggo is particularly associated with the Lord of the Rings Trilogy. “That was memorable because we were filming for so long,” he says. “I loved being in New Zealand, and as often as I could I would take off to go camping and fishing in the surrounding area. Mostly though I would go for a ride to spend more time sharing and making friends with my horse. I asked Peter Jackson, our director, if my character, Aragorn, could have more time in the saddle. He agreed, which was great.

“A lot of actors prefer to keep their feet on the ground and a lot of directors worry that their stars might get hurt and need time off. Peter wasn’t like that at all — very creative and he knew I was okay with horses.”

Viggo was so okay with them that he bought three of the horses used in the film trilogy. “I couldn’t resist them,” he says. “I didn’t move them from New Zealand, I bought them and made sure they were well cared for and then I used to fly back to New Zealand as often as I could to see them and spend time with them.” 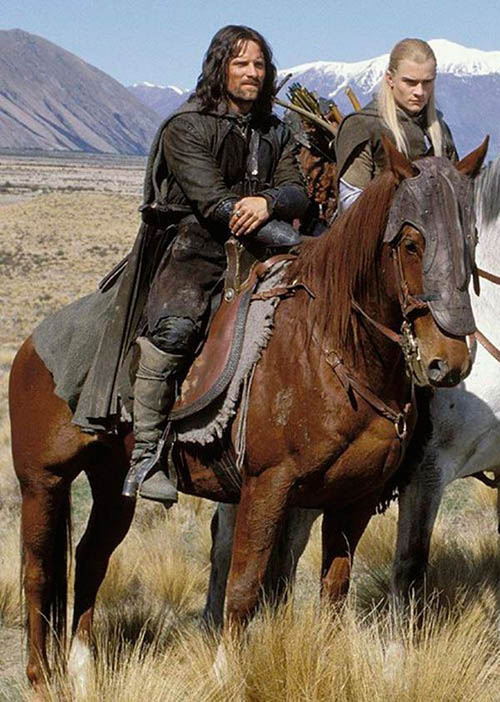 Viggo with Orlando Bloom in 'Lord of the Rings'. 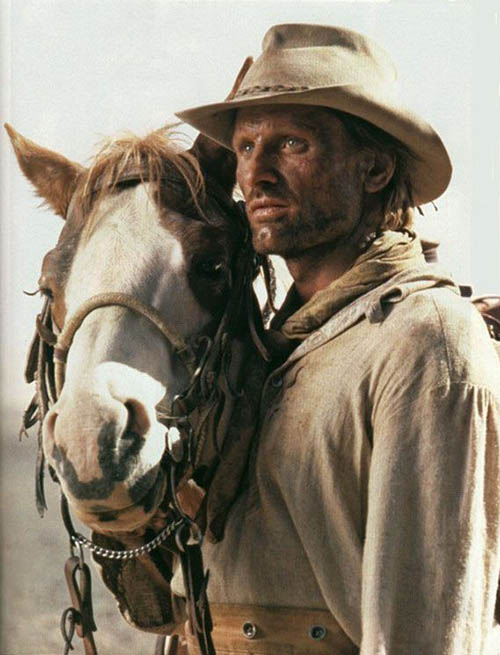 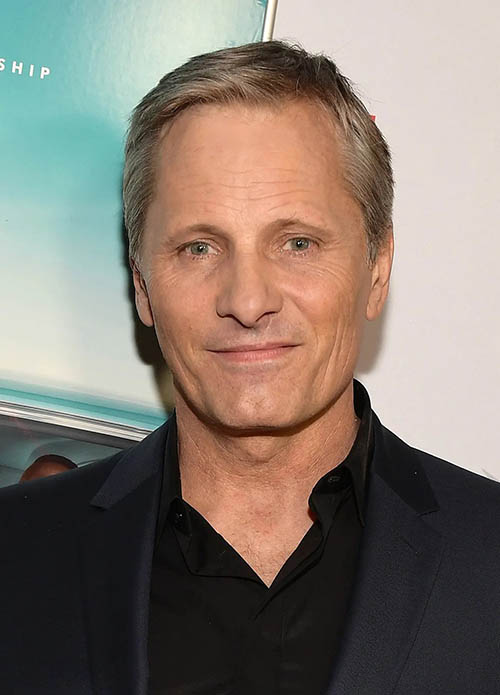 The actor is an advocate for America's wild horses.

If nothing else that shows that Viggo Mortensen is a totally dedicated horse person, but he does not limit that to working horses. “I have done what I can to draw attention to protecting the wild horses we have in the US,” he explains. “They are supposed to be protected but it doesn’t always work out that way for a variety of reasons. They are part of our heritage though, part of American history — it was on their backs that this land was originally built. Wild horses were caught and trained but enough wild horses were left to keep them going. Their numbers have dwindled and they deserve our protection otherwise they will be no more.”

Viggo’s passion for horses is never subdued. He is a very talented man in that he speaks a number of languages fluently, he is a writer, a poet, a painter and a public speaker as well as a highly acclaimed actor. Not surprisingly, he is also big into sport — soccer, American football, ice hockey — and some equestrian sports too.

“If it involves horses, I’m interested,” he says. “I think if you are a horse person you just can’t resist watching them no matter what they are doing. Even if they are just standing still and maybe casually chewing some grass, looking straight at you and wondering what right you have to be in their space. You can’t take your eyes off them, wondering what is going on in their minds, and you come to the conclusion that there is no horse living now or in the past that is not simply beautiful.”EQ

Julia Roberts at Home in the Saddle – Equestrian Life, May 2022