Starring Edward Woodward, Jack Thompson and Bryan Brown, Breaker Morant to this day is regarded as one of this country’s finest films. 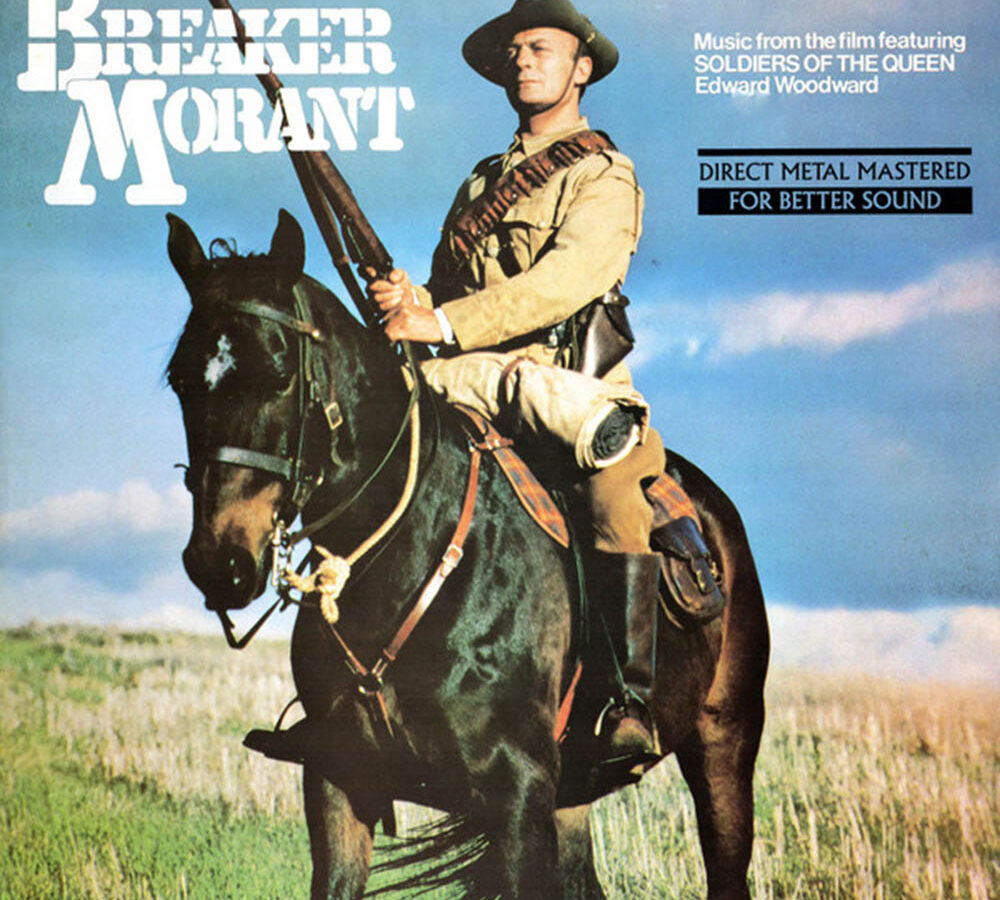 Breaker Morant (1980) chronicles the trial of three Australian soldiers for executing prisoners during the Boer War in 1901. It cost just $700,000, won Oscar nominations and umpteen film awards and led to director Bruce Beresford establishing a career in Hollywood.

With the exception of Woodward – whose name sounded like a “fart in a bath” according to Laurence Olivier – Breaker had an all-Australian cast and crew. The principal horses were supplied by Heath and Evanne Harris, and others came from South Australia where the picture was filmed.

All horse action took place in Burra, a historic mining town two hours from Adelaide. This location represented the Transvaal region of South Africa, where much of the fighting had taken place. Many of the picture’s riding extras were locals on their own mounts.

‘Margaret’, ‘Gwen’ and two dark brown stockhorses were the Harris’s experienced equine specialists who could fall, rear, hit their marks and do close-ups.

“I used to take Margaret and Gwen to pony club when I was a kid,” recalls movie horseman, Cody Rawson-Harris, who had been too young to work on the film. “They were chestnut full sisters and purebred Quarter Horses. In Burra, Margaret did some falls when the soldiers are galloping around the tents. They were soft sand set-ups, so she and her rider never got hurt.”

The film’s leading man didn’t want to get hurt either so prepared for his role by taking riding lessons in England. Harry “Breaker” Morant had been an excellent horseman and Woodward was anxious to replicate this man’s talents. Director Beresford had hired him because he thought he resembled Morant.

ONLY RIDE IN CIRCLES

In the past, the British actor had done some social hacking and had even ridden in a film. He told me when I interviewed him in Burra of the first film he had ever made. “It was called Where There’s a Will; it comes back to haunt me on late night television!” he said. “In preparation for Morant I spent three months at my local riding school. The winter was the worst in years and we only went outside once where we had to walk very gingerly because the roads were so icy. All my lessons had been around the indoor arena so when I arrived in South Australia, I really could only ride in circles!”

Breaker Morant’s first assistant director, Mark Egerton, now based in the UK, vividly recalls the time when Woodward met his equine partner. “Edward was wearing what can only be described as a very smart English hacking outfit – well-cut jacket, yellow waistcoat, neat jodhpurs and highly polished boots. He asked the trainer, Heath Harris, what the horse’s name was. “Dickhead” was the blunt reply – “then I shall call him Richard Cranium” and he gave the horse a pat.

Egerton added that Harris was displeased with the way the “Pommy ponce” looked astride the horse. “He rides like he’s got a poker up his backside and we’ve only got two weeks to train him.” But as the film attests, Woodward ended up looking the part and he, the trainer and Richard Cranium hit it off splendidly. This is the horse in all the close-ups and the one featured on the famous poster.

In long shots and action scenes he was doubled by ‘Gaby’, who was also used as a supporting actors’ mount. For several years, upon returning home, this talented stockhorse had gone away into the local forest. “And one day Gaby came back out,” said Cody, who then took him, with a bunch of others, to do a few days’ work on Banjo Paterson’s The Man From Snowy River series. “Lewis Fitz-Gerald was in one of the episodes and he got to ride him, just as he’d done in Breaker. He was thrilled to see him again.” 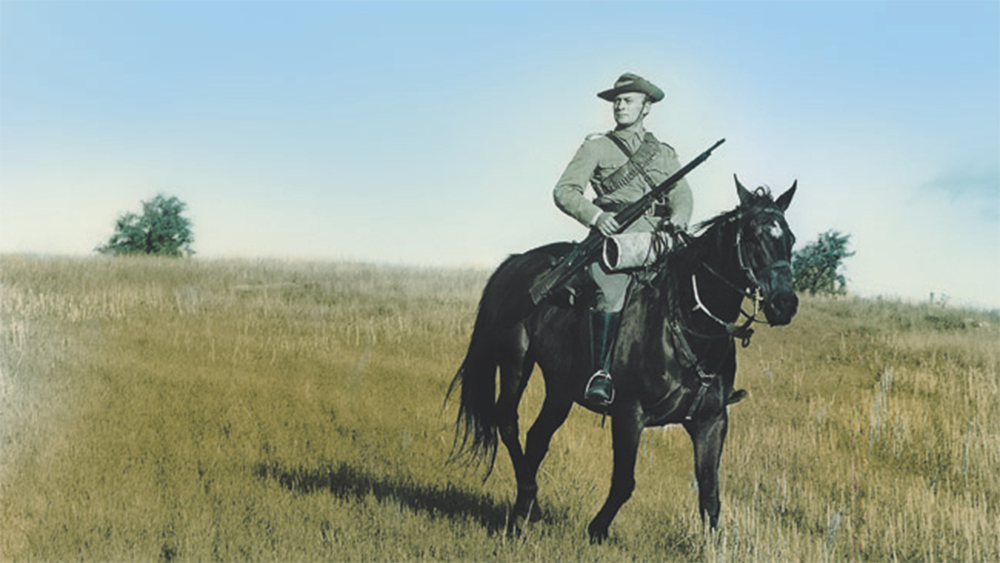 'Breaker Morant' (1980) chronicles the trial of three Australian soldiers for executing prisoners during the Boer War in 1901. 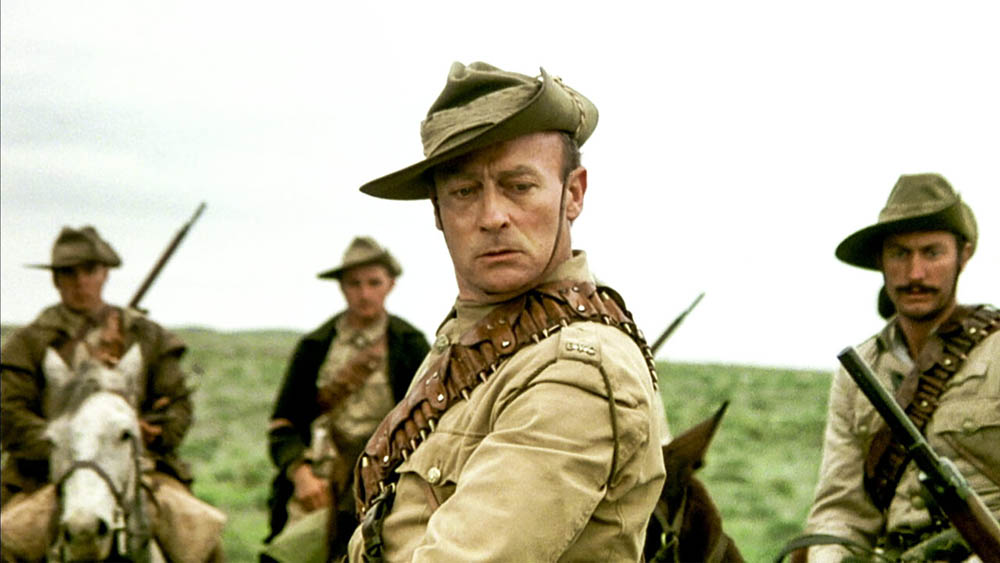 Fitz-Gerald had been fresh out of acting school when he made his film debut in Burra. He loved riding every day, and working with Woodward who was one of his heroes. “He was self-effacing and very supportive,” he said. He revealed that not every one of the star’s riding sequences actually involved a horse. There was one scene where he was shot from below to hide the apple boxes he was sitting on while holding some reins.

“He looked down at me while they were filming,” recollected Fitz-Gerald. “His eyes twinkled as he said, ‘Lewis, dear boy, I don’t have to know how to ride a horse, I just have to look as if I can’.”

He was being modest; in most of the footage he was really sitting in a real saddle on a real horse. And it would have been a good way to keep warm – during filming the weather was bitterly cold, often accompanied by slicing rain.

Fitz-Gerald said it had been more like Flanders than the Transvaal. “I can remember breaking half an inch of ice on the horse troughs in the mornings when we began. The freezing, sucking mud on our boots was remarkable.” But the conditions never dampened the young actor’s spirits, and he just loved being with the horses.

Bryan Brown, however, wasn’t as enamoured of these animals. “He told us he could ride,” said the film’s producer, Matt Carroll, “but when he arrived on set it was obvious he’d hardly ever been on a horse. We found a double for him most of the time but occasionally he did have to mount and dismount, be in the saddle, walk up to the camera and stop on a mark.”

For one pivotal scene Brown trained for three-and-a-half hours, causing the insides of his legs to bleed, but at the end he was able to step off the horse at a gallop. Another scene required Brown to run shouting up to his horse, mount it and gallop off with a team of men. Egerton recalled that by take 10 he was still shouting and running, “and still trying to get on his horse which kept moving away. Take 11, he still ran and he still screamed and this time the horse didn’t move. It surprised Bryan so much he forgot to get on it!”

Maybe he learnt something from these Burra experiences; many years later in 2011 he and his wife, Rachel Ward, starred in Free Rein, a Lonely Planet documentary where the couple, on horseback, follow a stockman’s trail through the Australian outback.

Despite some of Breaker’s actors not being equestrian geniuses, and despite high-speed rides over difficult terrain, falls starring Margaret, Gwen and several South Australian horses, mounted charges and hundreds of explosions no men or animals were injured – well almost.

The Boers’ attack on the fort was an enormous sequence – horses everywhere, people running, extras playing soldiers in tents and mounted extras as Boers who flattened the tents as they galloped into the camp. Three takes were shot and at the end of each Egerton would ask if everybody was all right, which is what first assistants do. All seemed well. “After the third take Bruce went over to speak to an actor. He walked straight over one of the collapsed tents, stood on an extra’s ankle and broke it. It was the only injury on the entire film!”

It was amazing lives weren’t lost during the search for the mounted extras and horses. Many of the locals were sheep farmers. Their forefathers might have gone a’droving on horseback but these blokes did it the modern way – on motorbikes. For the auditions, men turned up with saddles and horses which hadn’t been sat on for years. The riders were to gallop to the top of a hill, spin, gallop down again and step off their horses as they stopped. 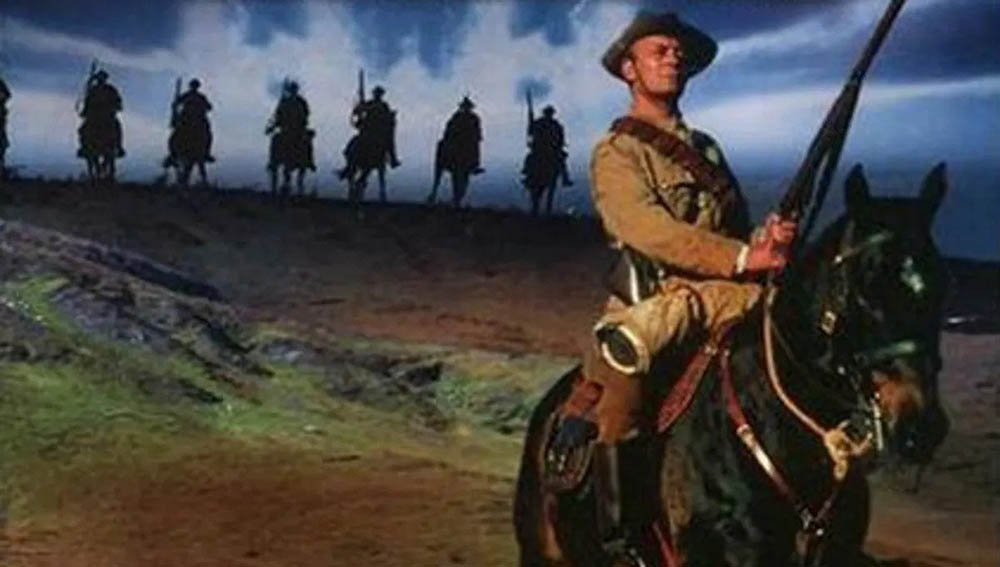 'Breaker Morant' featured a number of horses, many of which were sourced from South Australia where the picture was filmed. 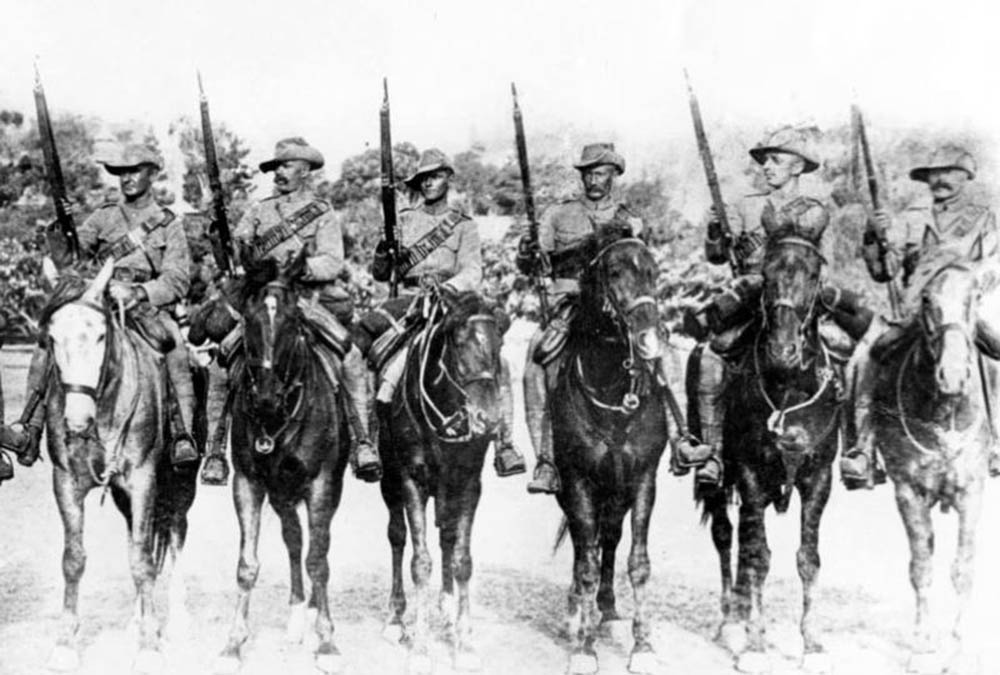 The real Breaker Morant, far left, serving with the British irregular unit, the Bushveldt Carbineers, during the Boer War.

Their riding apparel was the complete opposite to Woodward’s outfit when he was first introduced to his horse. One rider had on shorts, hobnail boots and a blue singlet. As he began the ascent, his girth broke and he disappeared backwards off his horse. Another, in thongs and T-shirt, went up the hill like the clappers; his saddle slipped to the side and he finished his ride horizontal to the ground. “How did I do?” he’d asked.

The auditioning process was a comical nightmare but, finally, 20 men were selected. They were trained to do some stunts and their horses acclimatised to cameras, mics, dollies, explosions and machine gunfire. All worked long hours for low wages and all did a great job.

“Everything about this film was good,” Jack Thompson said later who, like Brown, won a Best Supporting Actor award, this time from the Cannes Film Festival. “It was a demonstration of a coming of age in Australian film. I think everyone involved in it went on from there with the considerable recognition given to them and an invitation to go further afield. To become involved in what is, after all, like any other art or craft, an international concern.”

Woodward was similarly enthusiastic. “History will show that Breaker Morant is probably one of the greatest small films – and I don’t denigrate it by saying that – to have ever been made. “And Richard Cranium was absolutely splendid.”

Next in Equestrian Life’s Horses & Movies, ‘The Horse Whisperer’ (1998) directed by and starring Robert Redford.