Mareeza Brown’s journey – from scruffy, unwanted off-the-tracker to adored and pampered city-dwelling steed – is a rags to riches tale that shows what can be achieved when expertise, patience, compassion and belief in a horse combine. 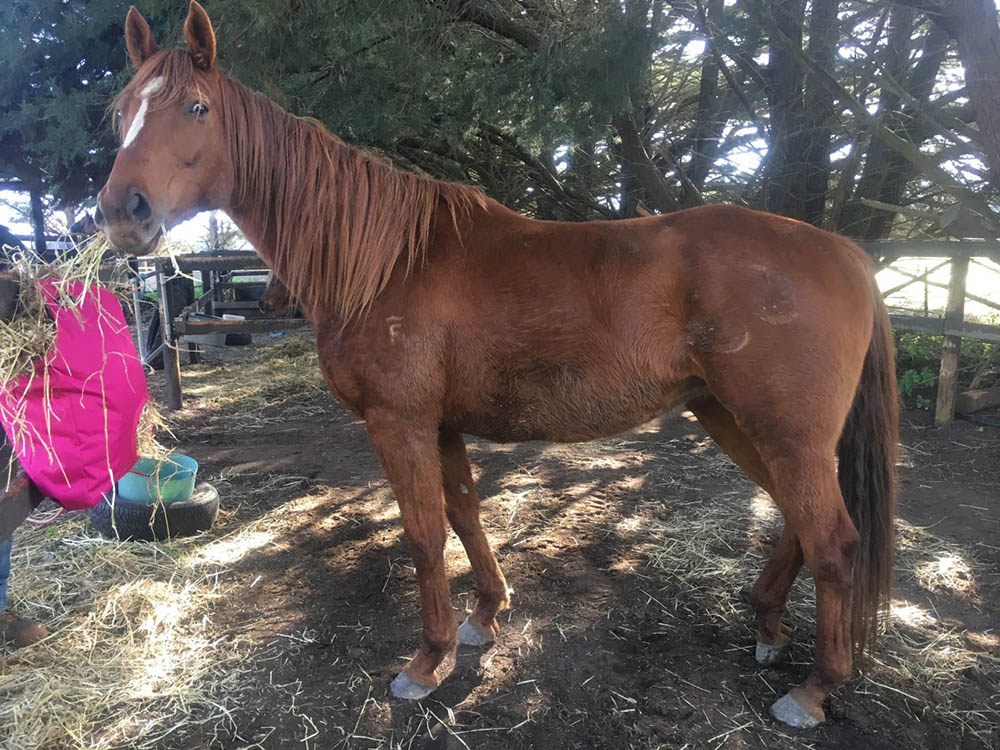 “She proved to be a
very quick learner and
quite trainable.”

“A chestnut mare with a bit of a white wild eye that hasn’t been ridden for a couple of years… yikes!” Such was Lou Abey’s first impression when Mareeza Brown arrived at her property for retraining. In paddock condition with a rough winter coat, some superficial cuts, unkept hooves and a mane that came down past her shoulders, it was hard to see the diamond in the rough as she cast her eyes over the anxious young mare.

“I had spoken to her owner and trainer Martin Gray, who told me she was spooky, shied a bit, pulled back for the farrier and could get hot,” Lou explains. A Racing Victoria Acknowledged Retrainer, Lou was about to commence 12 weeks of retraining with Mareeza Brown as part of RV’s RESET program, a new pathway for Victorian thoroughbreds that have struggled to find the right home following the conclusion of their racing career.

Mareeza Brown, known as “Maizy”, had failed to impress on the track. Foaled in 2014, by Big Brown and out of Mareeza, she had three unsuccessful starts at Tamworth in 2017 before joining Martin’s stables in Victoria; she was prepped, but ultimately never raced again and later had a foal. Despite several attempts to rehome her, there were no takers. Without the safety net the RESET program provides, the future was not looking bright for Maizy.

Maizy settled into her new life and routine quite quickly at Lou’s farm near Bacchus Marsh in regional Victoria when she arrived in July. Yarded next to the family’s Shetland pony Chopsticks, her initial anxiety soon subsided and her sweet nature started to shine through.

“We did a fair bit of groundwork and once she decided to trust me, she proved to be a very quick learner and quite trainable,” Lou explains, adding that she never had a problem with handling her, nor was she challenging for the farrier or dentist. “She has a good attitude to her work and started to do some nice flatwork after just a few weeks.”

An experienced eventing and show jumping rider (who has also played polocrosse and campdrafted in the past), Lou soon introduced pole work exercises and jumping grids to Maizy’s program. After approximately two weeks of training, Maizy was ready to be entered in an online show jumping competition at the 65cm height, producing a very calm and balanced round!

“It was around the eight-week mark that Maizy really started to change shape, develop some topline and show some very good work on the flat,” Lou enthuses. As her summer coat started to come through, the young mare was blossoming and revealing what a lovely horse she truly was. Her work on the flat was going from strength to strength and – like most horses – in the right frame of mind, she was very trainable. “Her greatest strength was her good attitude. If stressed and adrenalised she was more challenging to work with, so we were mindful of this in all the work we did. Maizy liked to be with company, and she responded very well to routine.” 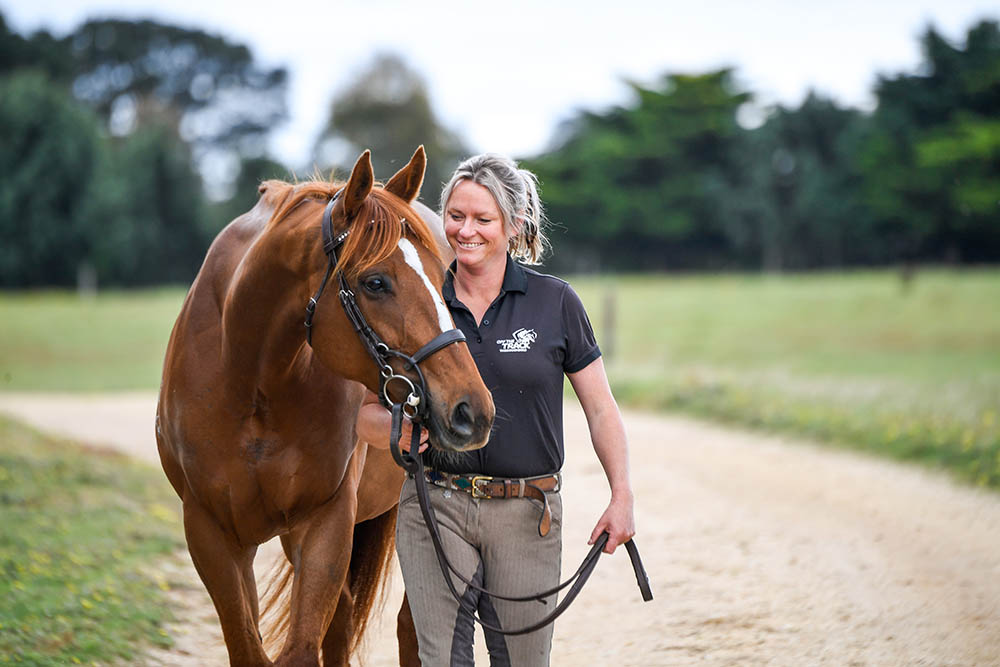 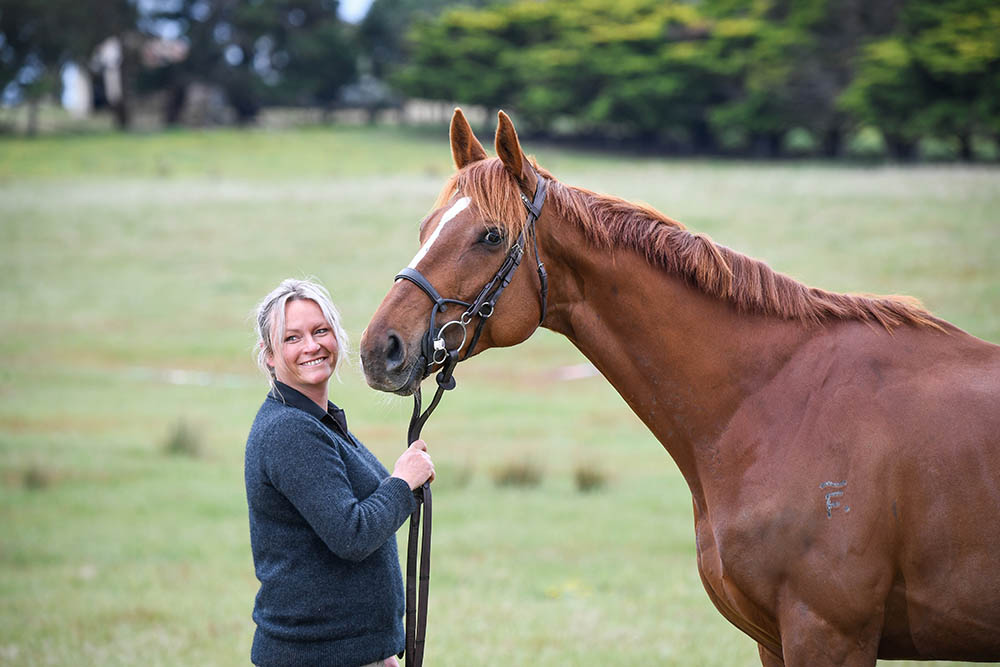 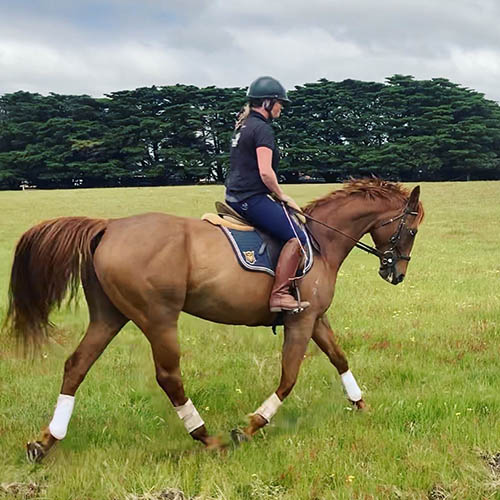 Maizy after 12 weeks of retraining.

“She had a private
lesson — and she
was a superstar!”

Despite being retrained during Victoria’s Covid-19 lockdown period, Maizy was able to gain exposure to new environments towards the end of her training program. “Normally we would have taken her off the property for schooling, or even just an outing to be in a yard and have a quiet experience,” Lou explains, adding: “I did, however, get her on the float and to a friend’s place to school in an arena and paddock, and then later to my show jump coach Kate Pither’s, where she had a private lesson — and she was a superstar!”

Maizy’s retraining program involved plenty of variety and time outside the arena. “We are lucky to live on a farm, so we could hack out regularly around the paddocks and on quiet local roads,” says Lou. “My fabulous fiancé Will has built some great cross country fences here to train over, so we could cross country school as well as expose her to lots of different things: machinery, cattle, open spaces, ditches, banks and hills!”

By October Maizy was ready to find her new home, and Lou received over 60 enquiries once the young mare – who was now an attractive and well-started prospect – was advertised! One of the many interested people was Sydneysider Flo Mills, who had been looking for a young showjumping prospect, and struggling to find the right one within driving distance from where she lives.

When Flo saw Maizy’s sale ad, she was impressed by how much the young mare had learned in quite a short time, how much she had been exposed to in her retraining off the track, and how calm she appeared to be. Having a friend, Issy Houghton, in Victoria who knew Lou through eventing was a great help. Issy was able to speak to Lou in more detail about Maizy and test ride her on Flo’s behalf. Within two weeks, Maizy was en route to her new home at Centennial Parklands Equestrian Centre (CPEC), where Flo works and now boards Maizy. 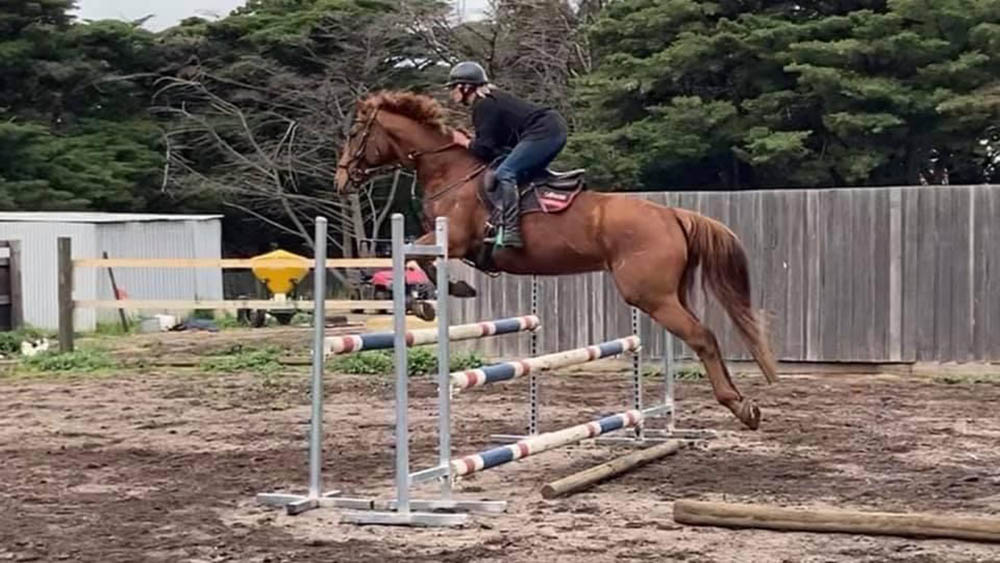 Maizy enjoyed her jumping education with Lou and showed scope and ability.

“I really haven’t
had any problems
with Maizy.”

“I loved her from the minute I saw her. I almost cried, to be honest – I haven’t owned a horse for such a long time, and it was so exciting to meet her,” says Flo, describing the moment Maizy stepped off the truck in Sydney. “She was actually prettier than I thought she’d be! She has a wall eye, so that can look a bit strange in some photos, but when she arrived the first thing I noticed was that she has such a beautiful face.”

Flo couldn’t be happier with how Maizy has settled into the hustle and bustle of city life. “Everyone keeps commenting on her temperament, you can ride her around on a long rein and she is fine,” Flo explains, adding that as she works at one of the riding schools within CPEC, she is able to spend plenty of time with her new horse. “She’s out of her stable three times a day, enjoying some green pick and meeting everyone!” Flo laughs.

Maizy headed to the paddock for a two-week spell over Christmas, however, in the future Flo would like to do some showjumping with her and thinks she has the right temperament, talent and scope for a competitive future. With a plan to take things slowly, the pair will first compete in classes held at CPEC, before venturing out to showjumping days in the Greater Sydney area in 2021.

Lou Abey is delighted that Maizy – a horse she developed a strong affinity with during their time together – has found the perfect home where her training will continue. “Flo is a capable rider, has experience with thoroughbreds and is also surrounded by very experienced horse people where she keeps Maizy, and where she works. I think that is so important as it provides constant support. While Maizy progressed so well in her 12 weeks of training here, she is still a young green horse.” 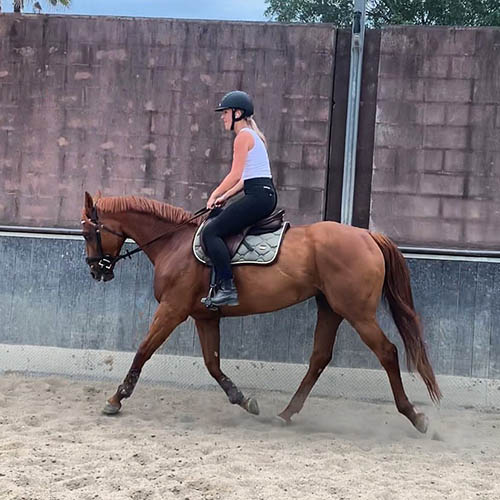 Maizy with Flo at Centennial Parklands Equestrian Centre in Sydney.

“Remember that we,
the retrainers, want a perfect
match for our horses.” 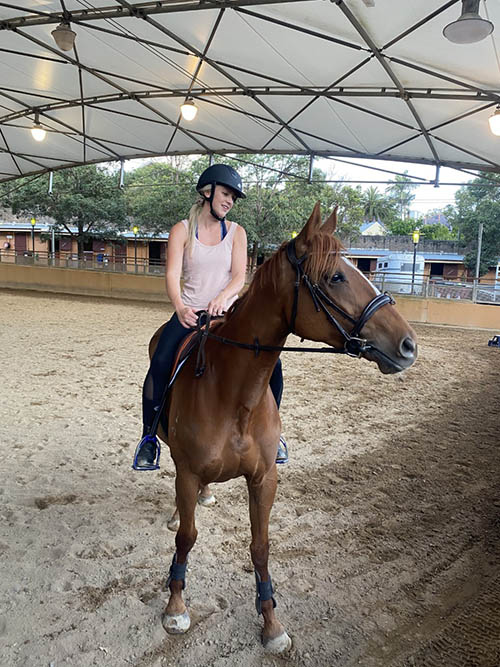 Maizy has settled into her new life in Sydney very well.

Similarly, Flo has been very happy with the process of taking on a RESET horse. “Lou has not only trained Maizy well, she has also offered me so much help with her,” she says; the pair have been in regular contact to share photos and discuss the mare’s needs, from training and handling to saddle fitting requirements! “I really haven’t had any problems with Maizy, but I knew that Lou and Racing Victoria were there to help if I did.”

With RESET program graduates such as Maizy being in high demand once their 12-week training is complete, Lou offers the following advice for anyone interested in enquiring about current and future RESET horses. “Remember that we, the retrainers, want a perfect match for our horses as much as you want to find your unicorn, so provide us with as much information about yourself as you can, and ask lots of questions. Send the retainer some video of yourself riding recently, or provide us with the contact details of your coach. Tell us about your experience with thoroughbreds, young horses, and your support network and mentors.”

It’s a sentiment Flo echoes. “Just do it. A lot of people get put off because of their racing history, but these horses are really adaptable. Ring up, be honest and ask questions, you won’t regret it!” EQ

Read more about off the track horses: