HOW THE AUSSIES STACK UP FOR TOKYO

YOU ASK, WHO IS LYNDA DE GRUCHY?

A KNIGHT’S TALE
DOWN UNDER

THE MYSTERY OF EQUINE SHIVERS

THE INS & OUTS OF BITLESS BRIDLES

FURY, A STALLION WITH STANDARDS

GET DOWN & DIRTY FOR A BETTER ENVIRONMENT

WILL MY HORSE MAKE IT TO GRAND PRIX?

Australia’s Dressage, Eventing and Showjumping teams for the Tokyo Olympics have been announced. A former Olympian himself, Heath Ryan assesses the prospects of our athletes making the podium. 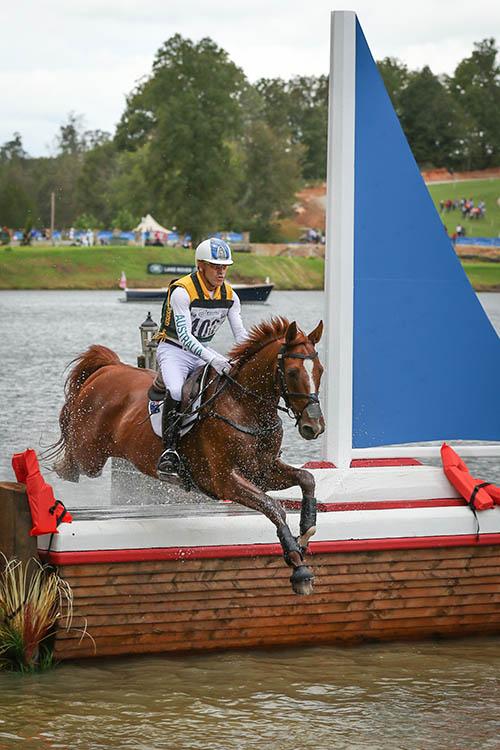 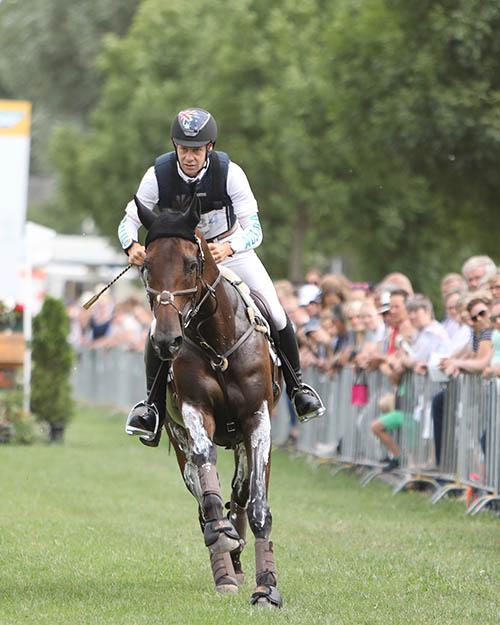 Here are our three Olympic teams for Eventing, Dressage and Showjumping. The Eventers are a serious medal chance, even a gold medal chance. Our Dressage team is a mix of the very experienced and the young. Certainly, our youngest Dressage rider is challenging territory previously frequented only by established superstars. This just might be the turning of the tide for Dressage in Australia.

The Showjumpers are always a difficult bunch to read accurately. Without question in 2018 these underdogs produced an exhilarating performance at the World Equestrian Games to rank sixth in the world. It was unexpected and brilliant and made us all cheer like mad. Can they hold this hard-won ground in 2021 way up there in Tokyo?

In the below assessment, we’re looking at long-format personal bests (four or five star), and many combinations do in fact have better personal best scores at CCI4*S level. Tokyo is in fact an amalgamation of levels, and is probably closest to a CCI4*L with the dressage, cross country and jumping taking place in that order across three consecutive days. A five-star dressage test will be used, while the cross country test in distance is between a CCI4*S and CCI4*L (the distance was shortened following the test event), with the number of jumping efforts lying in the CCI4*L range. For the jumping, the team round will be at four-star height, while the individual round (which follows the team jumping round on the same day) will be at five-star height.

The combination’s personal best score in a long-format CCI5*L is 33.8 penalties.

Chris had six horses qualified for Tokyo. In 2016 at the Rio de Janeiro Olympics, he finished up in fifth position just out of the individual medals. Should the stars align, Chris is definitely an individual medal proposition.

The combination’s personal best score in a long-format CCI 5*L is 34.6 penalties.

Similarly to Chris Burton, this score is in a CCI 5*L, which is slightly more difficult than the CCI4*L competition which is the Olympic Games standard.

Shane rode Virgil at the World Equestrian Games in 2018 in the USA for Australia. So Shane and Virgil are very experienced. Shane and Virgil have won so much here in Australia that should the Olympics go according to their potential, this is also an individual medal proposition.

The combination’s personal best score in a long-format CCI4*L is 32.5 penalties.

Andrew and Vassily de Lassos have had one showjump rail in the last three years of top competition and have been clear and under time cross country in all competitions for the last three years. Some people are saying this is the best three-day event horse in the world at the moment. Andrew and Vassily de Lassos are also a likely individual medallist.

The Alternate Rider is a sort of reserve who can be switched into the team during the competition. It’s complicated! The simple version is, let’s say Chris Burton’s horse Quality Purdey has a colic attack after the Dressage test and is withdrawn on veterinary advice. The Alternate Rider can be substituted in to do the cross country and showjumping. The team will take a 20-penalty hit to put a substitute in, but that is better than the team being eliminated. In this new Olympic format, the team gold medal may well be won on the reliability of a nation’s top three riders. In the past a team had four riders and the top three scores counted. Please understand this is a very simplified version of the Alternate Rider format. 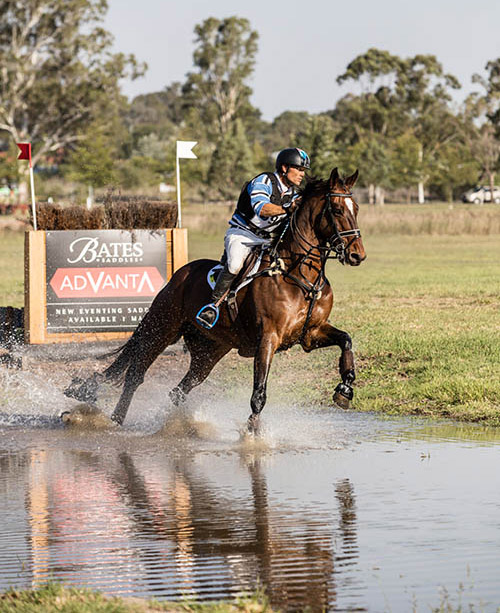 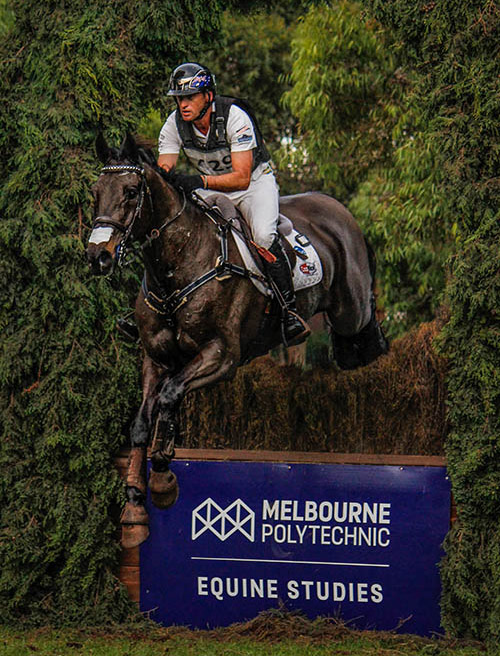 Stuart Tinney and Leporis will be the travelling reserves for the Eventing team. © EQ Life.

Anyway, Stuart Tinney on Leporis has a personal best score in a long-format CCI4*L of 33.0 penalties. Leporis is currently just 10 years of age, which easily makes him the youngest horse at Tokyo for Australia in all three disciplines.

So, if everything went to plan for Australia and our riders came up with personal best (long-format) finishing scores, we should end up with a team score of 100.9 penalties.

The two nations who are favourites to win the team gold medal are Great Britain and Germany. Using the same formula that I have used on the Australian team, Great Britain should finish up with a team score of 71.6. Holy smoke! That is 29.3 penalties in front of the Australian projected score and is going to take some beating. The German team should finish up on a score of 81.0. Crikey! That is still 19 penalties in front of Australia!

So, are we Australians capable of a team gold medal? Yes! Why? Three reasons: 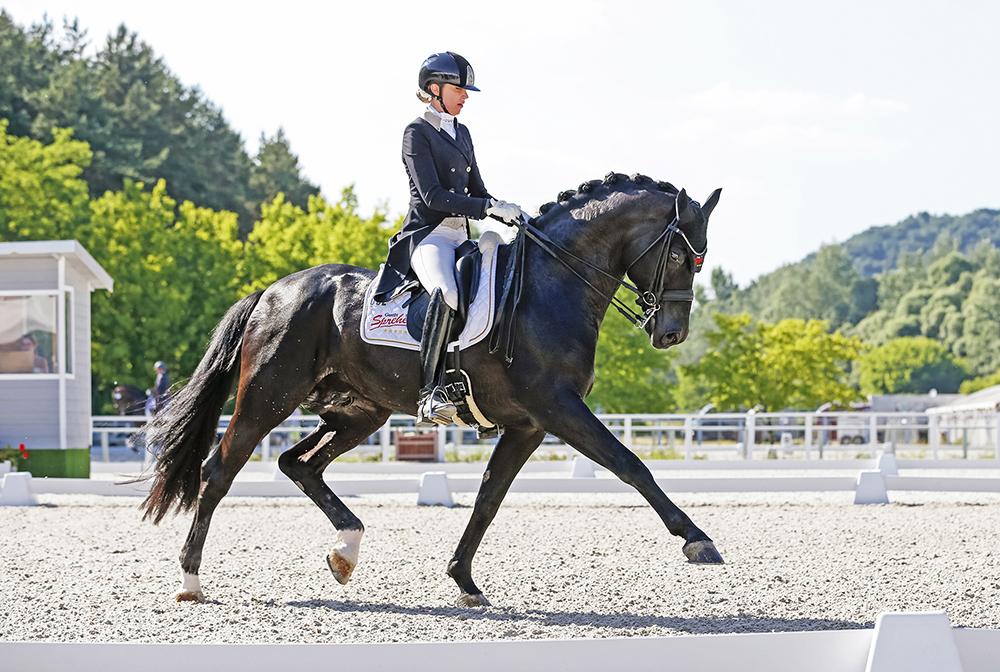 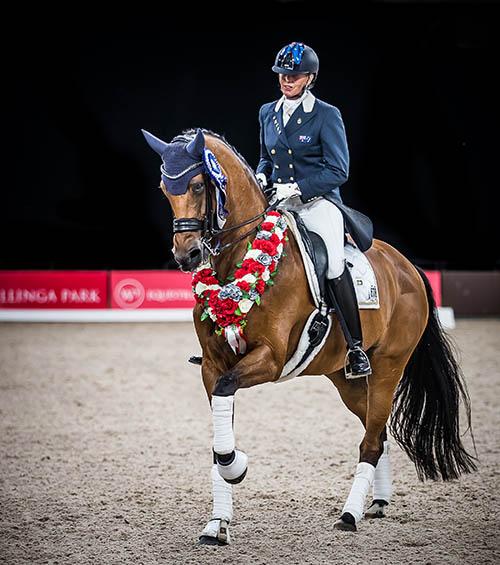 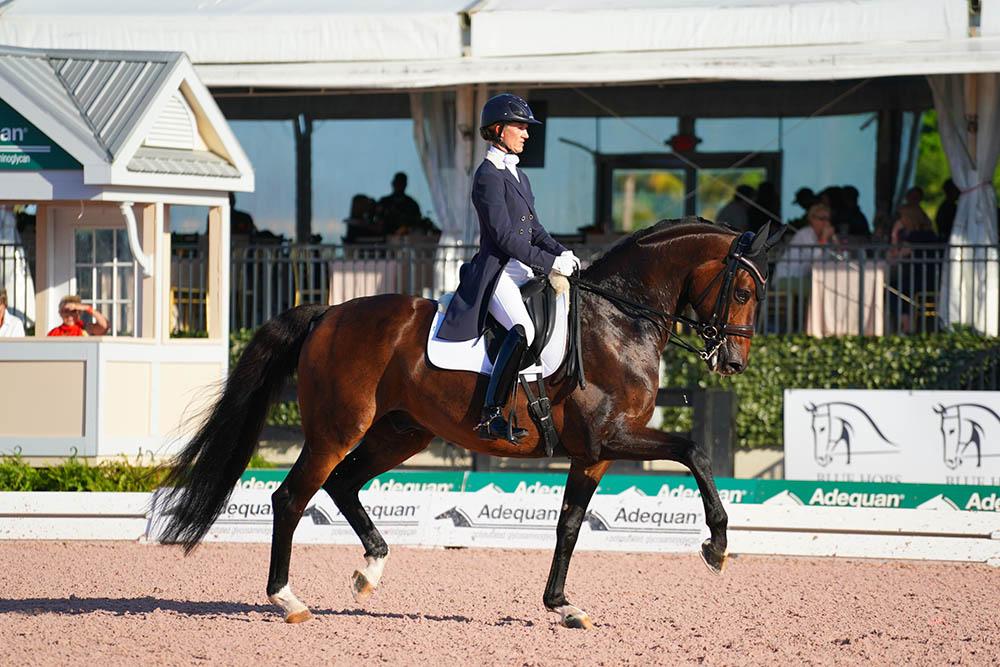 This score is an Australian record and Simone and Destano are right now in magnificent form. Simone was only just on the radar in terms of contention for Australian Olympic selection this time last year; this is the ultimate story of rags to riches and has caught the imagination of all Australians! Simone is currently based in Germany.

Mary Hanna is a stand-out Australian ambassador being 66 years of age and the oldest athlete to represent Australia at the Olympics. What an achievement! Mary and her horses are based here in Australia and this makes a significant contribution to the sport on a national basis.

Kelly is based in the USA and her performances are getting better and better in the lead up to the Olympics.

It does appear that the Australian selectors have decided not to name a reserve for the Dressage team. There are three other Australian riders who should automatically have been on the team or reserves, however, for their own reasons they did withdraw from the selection process. There are still other riders in line who are not qualified under Australian criteria but are indeed qualified under Olympic criteria. Surely we should be naming a reserve at all costs rather than risk not having a full team at the Olympics. Do the selectors think that these other riders are so embarrassing that it justifies leaving them off and risking a whole Olympic team?

Anyhow, getting back on track with Tokyo. The Grand Prix is now nothing more than a qualifying event. 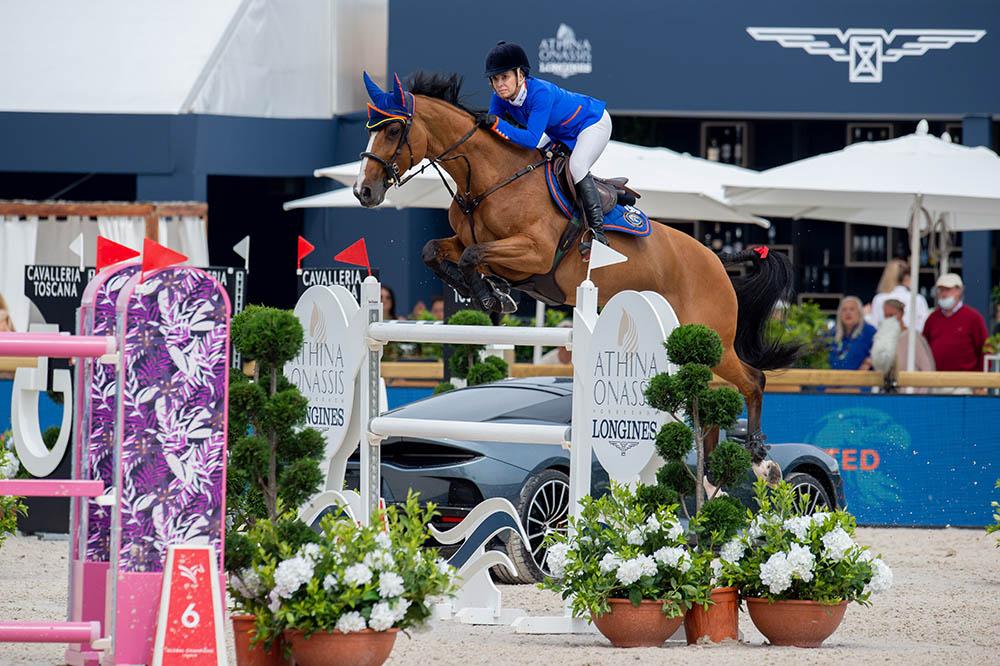 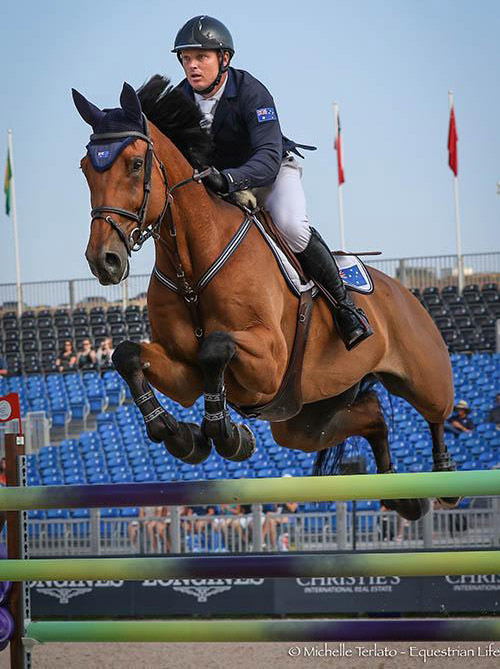 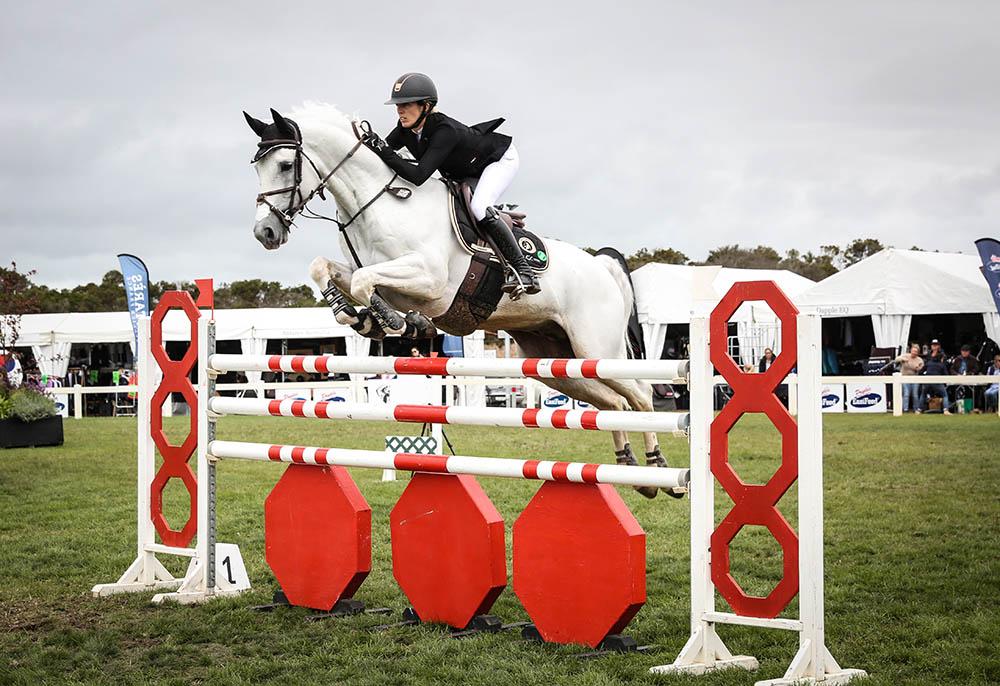 Edwina purchased Identity Vitseroel late in 2019 and has been competing the 13-year-old mare since then. They’ve had many starts at Longines Global Champions Tour (CSI5*) events for some good results, and also a second place in the prestigious London Olympia Grand Prix in 2019.

Jamie and Yandoo Oaks Constellation were part of the heroic Australian team who went to WEG in the USA and came 6th in the team competition to qualify Australia for the forthcoming Tokyo Olympics.

A former Kiwi, Katie moved to Canada at the end of 2019 and has been going really well at competitions around North America with her string of horses.

My final thoughts are that it would be a very successful 2021 Olympics for Australia if our riders were able to equal their personal bests, which is what they have been selected on. If they can better their personal bests this will be just brilliant and a great step towards an even better future. I think if the Eventers can stick to the sort of form they are selected on we will indeed get an Olympic medal. We just need a performance from our team that reflects nerves of steel.

The Dressage team is made up of two new faces and one very experienced Olympian. A good mix and the youngest member is clearly challenging new territory for Australia. Simone Pearce and Destano are rampaging into territory that has traditionally belonged to only the most famous Dressage countries and most famous Dressage riders. I think we are about to see the Australian Dressage team starting to move up the ladder. If we can continue to promote more new faces and more up-and-coming riders this may well be the beginning of the great Australian Dressage adventure.

The Showjumping was once, a long time ago, right up with the best in the world. We did seem to lose touch with the top nations for quite a number of years; however, the 2018 World Equestrian Games result was one of courage and performances unexpected. It made everybody gasp and everybody cheered. Nothing like an Australian underdog. It would be just fantastic if the Showjumpers can again dig deep and hold the hard-won territory gained by our 2018 superheros. 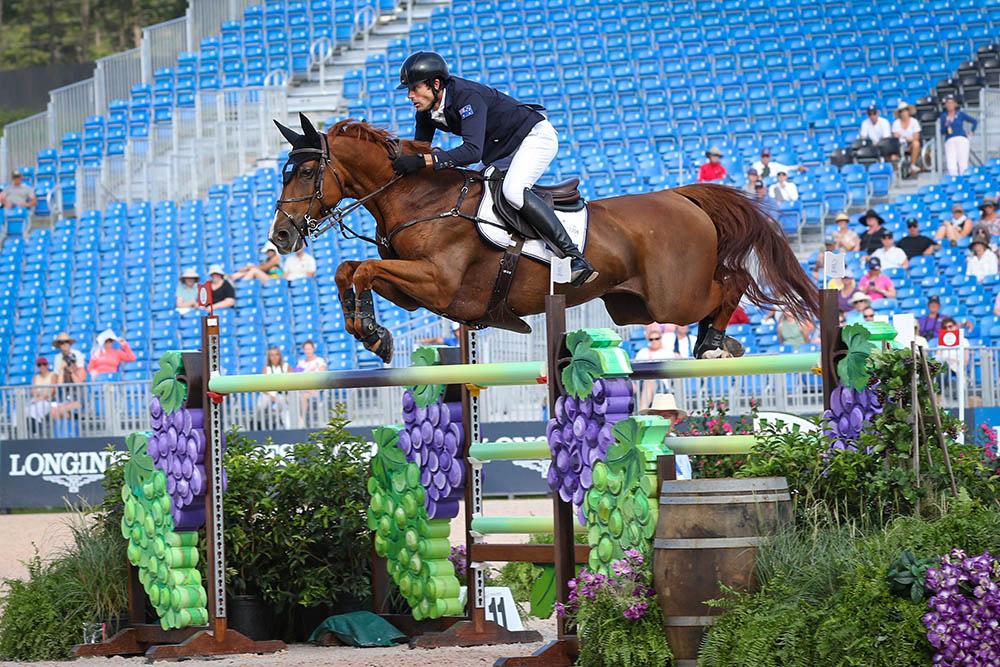 Rowan Willis and Blue Movie are the reserve combination for the Showjumping team. © Michelle Terlato Photography.

Good luck everyone, and to all of us here at home in Australia we need to turn those televisions on and track the live-streaming and social media and cheer at the tops of our voices until the neighbours complain! Bring on the Games.