Travelling to their first interstate competition, South Australians Katie Clark and off-the-track Thoroughbred Katelle Grand stepped up to the challenge to top the leaderboard in a classy field at Boneo Park. 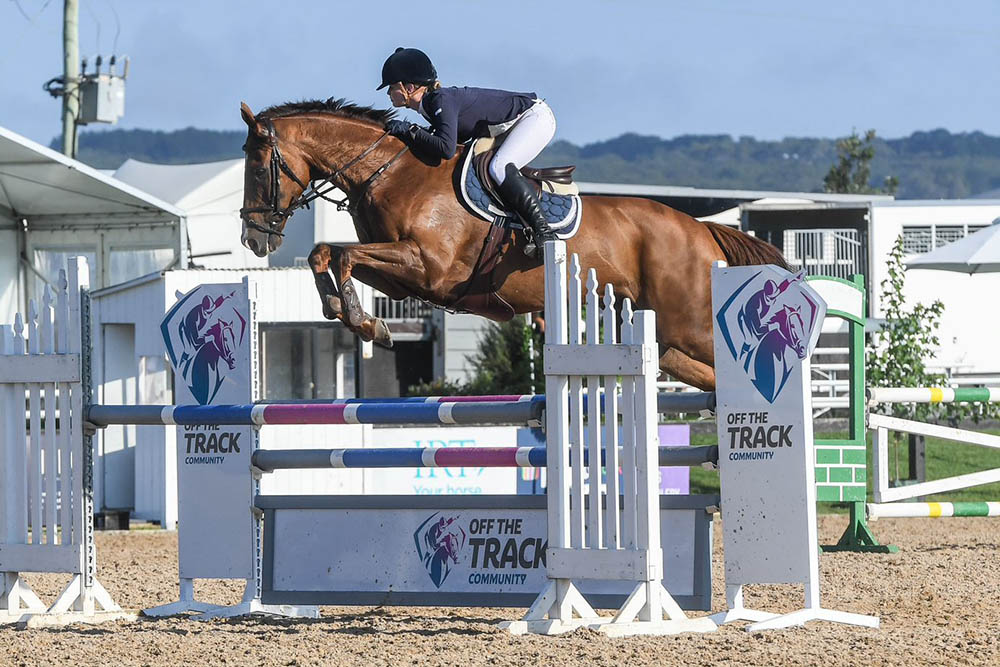 Katie Clark and Katelle Grand in action at the World Wetlands Day Jumping Championships. © Racing Photos.
Click here to learn more about Racing Victoria's Off The Track program and initiatives.

“Who knew we were secret
speed demons?”

“It was a long 10 hours in the truck, so you’re just hoping they go as well as you know they can,” says showjumper Katie Clark. The young rider made the journey from South Australia to Victoria’s Mornington Peninsula to contest the World Wetlands Day Jumping Championships and the Australian Jumping Championships, run over consecutive weekends.

Katie’s off-the-track Thoroughbred, Katelle Grand, was faultless across three days and five classes at the first event. The weekend began with a placing and another top 10 finish, however, he and Katie saved their best until last in the Racing Victoria Off The Track Championship 105-110cm, where they topped a strong field of 23 competitors to claim the win in a thrilling jump-off against the clock.

“He was just sensational, he did everything I asked. I really opened him up in the jump-off, and he was a speed demon! I challenged him to the double and some of the turns, and he responded so well. It was exciting for us to hit new heights and I couldn’t be happier!”

Katie and Katelle Grand were one of three combinations to produce a double clear on the challenging track, completing the jump-off in 49.75 seconds. Second-placed Robert Palm and Honey Steels Gold, who clocked 50.57 seconds, were also clear, as were Isabella Lloyd and former champion steeplechaser Bashboy, who crossed the finish line in 53.18 seconds to place third.

Katie says while watching the combinations going ahead of her in the jump-off, she thought she had no hope of catching them. “They went so quick and I thought I’d just give it my best… who knew we were secret speed demons? I was so shocked and thrilled at the same time. It was amazing.”

Katie travelled to Victoria with her father, while the rest of the family watched on from home via Equestrian Life’s live stream. “Before I was off the horse they were on the phone to Dad and I could hear them yelling! The live stream was especially great for us, coming over from South Australia – and all the people that couldn’t make it but have been a part of our journey were able to watch.”

Katie explains in that in SA there are also specific Thoroughbred classes, but they rarely have fields as large as what was on offer at Boneo. “To see there were 20-plus horses in that Championship… it was a great class, with lots of great competitors. You look around, and they all used to be racehorses and now they’re here at Boneo all enjoying their jumping life – it’s fantastic to see.” 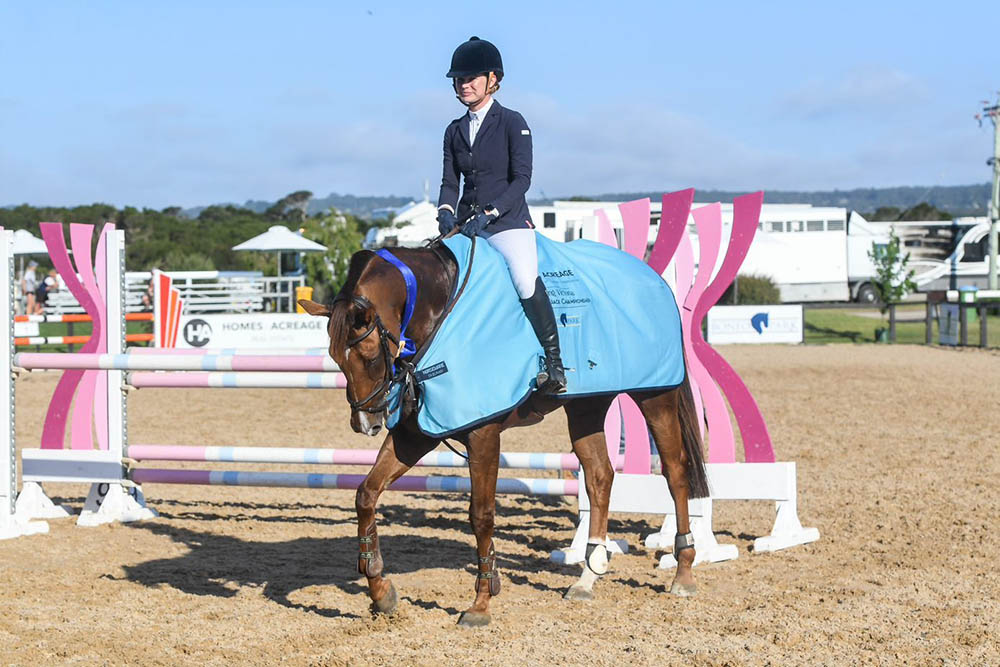 Bred by Gerry Harvey, Katelle Grand was foaled in 2011 and started life on the track as Easy Grand. By Hotel Grand out of Shack (Catching the Night), the chestnut gelding was trained by Moe-based Peter Gelagotis and had nine starts – winning one race at Geelong and placing third in another. He retired from the track after his last race in 2016 and ended up with Katie’s aunt and uncle, Michelle and Tim Clark of Mallala Equestrian Centre.

“He was a pretty good jumper and my aunt said, ‘Do you want to have a crack with him?’ We got on pretty well and the rest is history! We swapped ‘Easy’ for our prefix ‘Katelle’ but left the ‘Grand’… because he’s quite grand!” explains Katie, who adds that around the stable the now-10-year-old is affectionately known as John.

“I got him in 2017, but after having him for six months I went away to France for work following university. I was in France for three years, but I knew he was so special and I didn’t want to sell him. He was just in the paddock living the dream for three years, and we’ve only just started training again in the last year, so he has come along really quickly.”

Katie has been around horses since she was a child, with her parents both involved in showjumping when she was younger. She took up hacking for many years, and then eventually made the switch to jumping herself. “I wanted something a bit more exciting, so I got into jumping when I was 12. I got into Juniors, I had really great Junior horses – I’ve been really lucky.”

Katie says it’s been a juggle in recent times, going through the later years of high school, university and beginning work, however she’s found a way to continue competing in the sport she loves. “You take the time to do the things you love and showjumping – there’s nothing like it!” 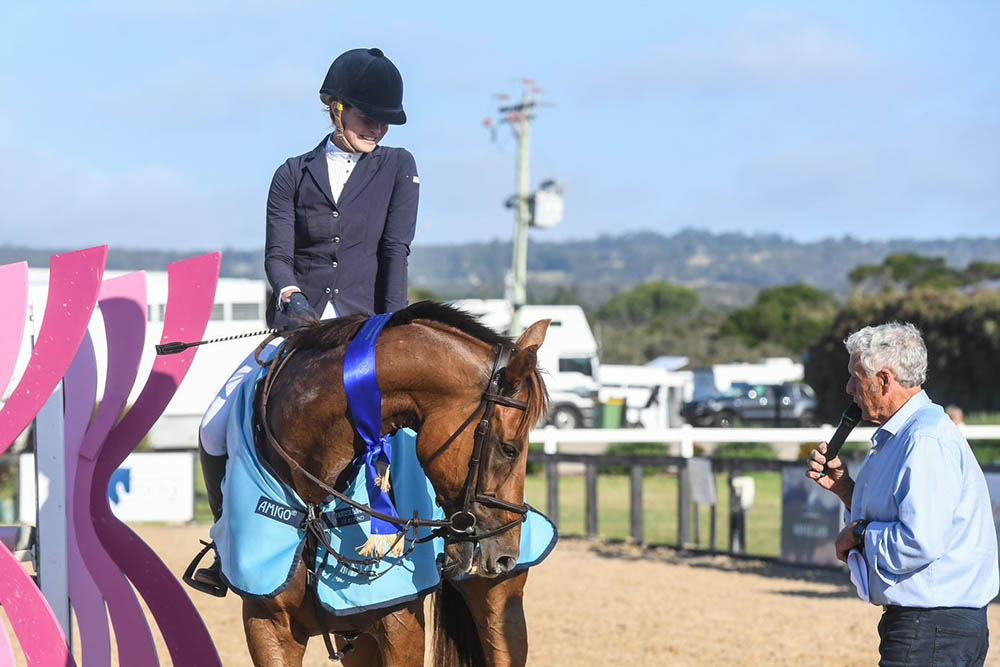 Katie has found that despite only being back in work a year, Katelle Grand is proving to be one of the easiest horses she’s ever had. “He is such a sweetie. He’s a real gentleman and a breeze to do anything with, he’s really lovely natured. He has been a bit of a dream, actually; he is super easy to train, almost a little bit too easy! He’s got a lot of natural ability and his willingness to learn is just off the charts. He is definitely the easiest horse I have ever had.”

Katelle Grand is not just a great horse in the saddle – Katie explains that he is also a relatively relaxed character on the ground, and even coming away on their first big interstate trip he’s had no trouble eating, drinking and settling in. “He’s taken it all in his stride. I couldn’t ask for anything more of him, he’s just been perfect.”

With the World Wetlands Day Jumping Championships over, Katie’s focus will now switch to the Australian Jumping Championships (2-6 February). “We’ll go in the Off The Track series, which is so exciting, and we’re also in the Amateur series.” (Update: Katie and Katelle Grand were fifth in the Equestrian Victoria Amateur Series and sixth in the Racing Victoria Off The Track Championship, capping off a very successful and consistent Victorian venture!)

Looking further ahead, once the pair have returned to SA it will be back to work after a week or two off, as the local showjumping season is getting underway and will run through until the SA State Jumping Championships in April. “He’s been going very consistently at 110cm so we’ll aim to step up to 120cm. Fingers crossed he keeps going the way he’s going and progressing… I’m hoping that in a few years we might be back here at Boneo in one of the bigger classes!” EQ

READ MORE ABOUT OFF THE TRACK HORSES: