We all want to be better horse trainers. Good horse training is effective, efficient and respects the horse’s experience and its welfare. Positive Reinforcement Training does all this – and the clicker has an essential role to play. 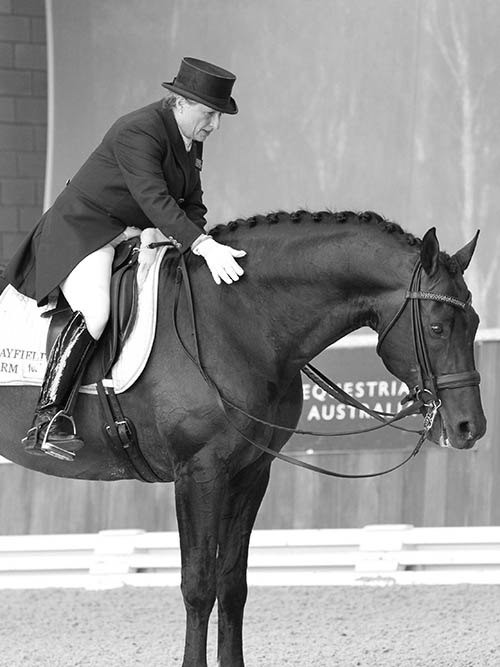 “Positive reinforcement is giving a
reward after the behaviour you want.”

A well-trained horse has a good life and is welcome everywhere, so says Tom Roberts. The biggest kindness you can do for your horse is train him well. So, we need a range of tools in our toolbox to achieve the training goals we set.

But we equestrians tend to be quite conservative and keep doing what we have been taught to do by our mentors. People who are animal trainers outside of the equestrian field have been faster to embrace what has been learned from science about learning. Positive Reinforcement Training (PRT) is now the dominant strategy to train animals in settings as diverse as research laboratories where an animal is trained to perform a research task, and in teaching laboratory animals to cope with research interventions. It is also used in zoos to train animals to voluntarily cooperate with veterinary procedures. If you need to put eyedrops in a giraffe, for instance, or trim the toenails of a rhinoceros, the zoo trainers will use positive reinforcement to teach the animal to want to cooperate. Modern zoos also use positive reinforcement to provide an enriched environment for captive animals.

There is a great deal of research supporting the welfare benefits of using PRT in zoos and research settings. Willingness to participate in PRT has even been shown to be an early indicator of veterinary problems in captive dolphins.

Equestrians are increasingly interested in the welfare of our horses. Indeed, the FEI states that the welfare of the horse is their top priority. Animal welfare has been studied extensively. The Five Domains Model identifies domains of welfare as:

The 2020 revision of this document focuses on animal/human interaction in both its positive and negative welfare implications. Of course, animals can benefit from their interaction with humans. That is what we want. The Five Domains Model recommends that positive interaction with animals is more likely to result from “reward-focused training, the use of secondary reinforcers (e.g. clickers) and the use of subtle pressure cues and timely release of aversive stimuli”. This results in the animal being more likely to feel “calm, at ease, finds being bonded to humans rewarding”.

The International Society for Equitation Science (ISES) has yet to take a position on PRT. So, what is positive reinforcement and what is the evidence that we should use it more?

Positive reinforcement is giving a reward after the behaviour you want, to encourage the behaviour that you want to train. The horse stands still in the cross ties – you then give him a carrot. You don’t give the carrot as a bribe or distraction to get him to stand still. When he stands still, he gets rewarded; but if he starts pawing or moving around, he does not get a carrot. Then when he next stands still, you give him the carrot which is the reward, the positive reinforcer. 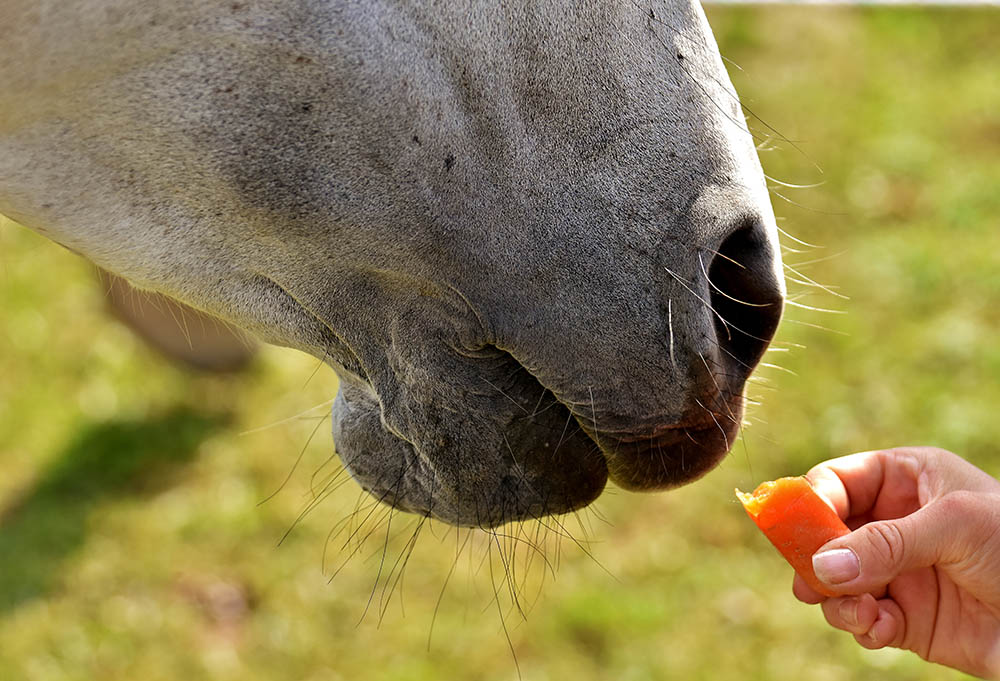 Positive reinforcement is giving a reward (e.g. a carrot) after the behaviour you want. 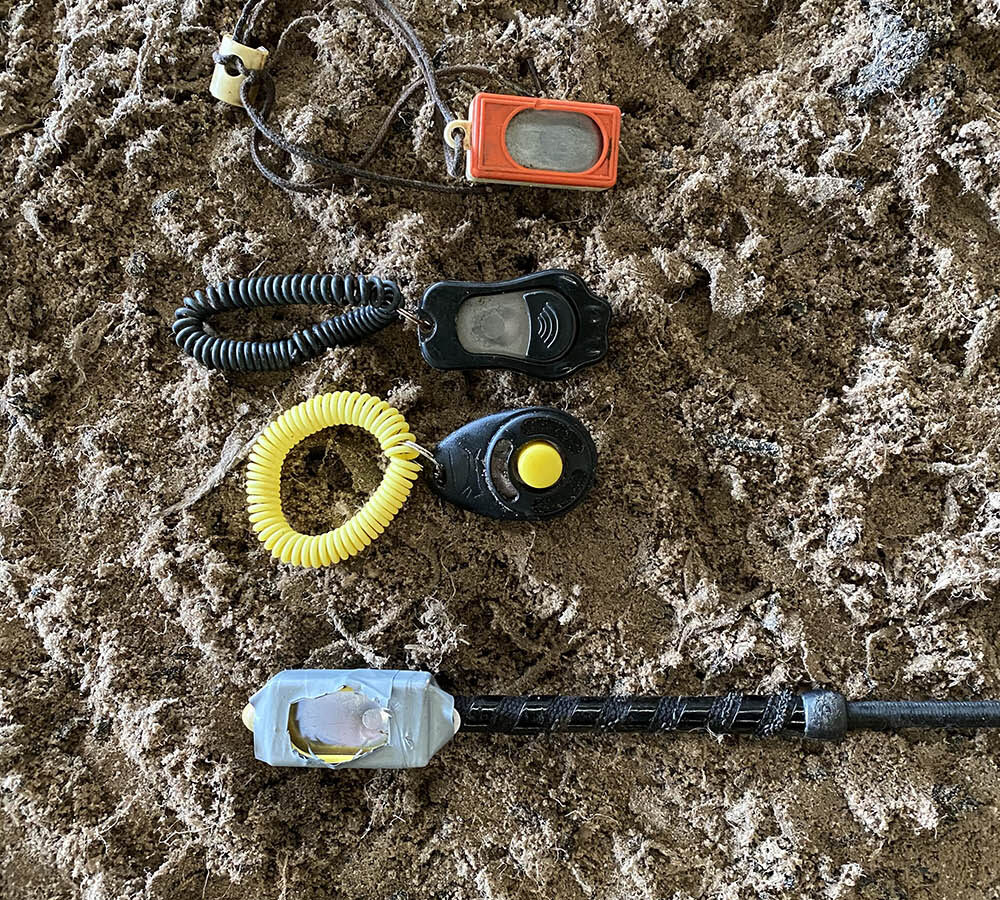 A clicker marks the behaviour that you are wanting to train. Here are various clickers, inclduing one taped to the top of a whip so it can be carried while riding without having too much to hold. © Kerry Mack.

In animal training, a clicker is widely used to facilitate positive reinforcement. I think the most helpful way to think about the clicker is that it marks the behaviour that you are wanting to train.* When training a ridden horse with positive reinforcement, the clicker will mark the reaction that you are wanting to train quickly, reliably and effectively. For example, if you are training the flying changes, you can use the clicker to mark the correct flying change, and then slow him down, halt and feed him a piece of carrot. If he understands the clicker, he will soon work out that it was the flying change that is being rewarded rather than the slowing down, the halt or turning his head towards you.

Similarly, if you are training the piaffe, you can click in the moment that he lifts the hind leg forwards and underneath himself, pushing his shoulder up and not so much forwards. Then with repetition of this reward he learns to repeat the step and he learns to balance in the high collection of the piaffe. He learns to do this in a more relaxed and less stressed way than some traditional methods. In my experience, horses trained this way will soon offer the new difficult work. The clicker is not the signal or aid for the piaffe or the change. You still train in the usual way with a pressure aid that is released when the goal is offered.

You can use the clicker to help jumping horses learn to jump novel things. We have found it to be really effective and far better than hitting a horse after he stops. Make sure he knows that the clicker marks the right thing using a target, then ask him to approach a scary but very low obstacle. When he approaches, and when he goes over, the click marks that he has done the right thing so that when he stops and gets fed, he understands what he is being rewarded for. Horses build a really positive attitude to jumping when you train like this. 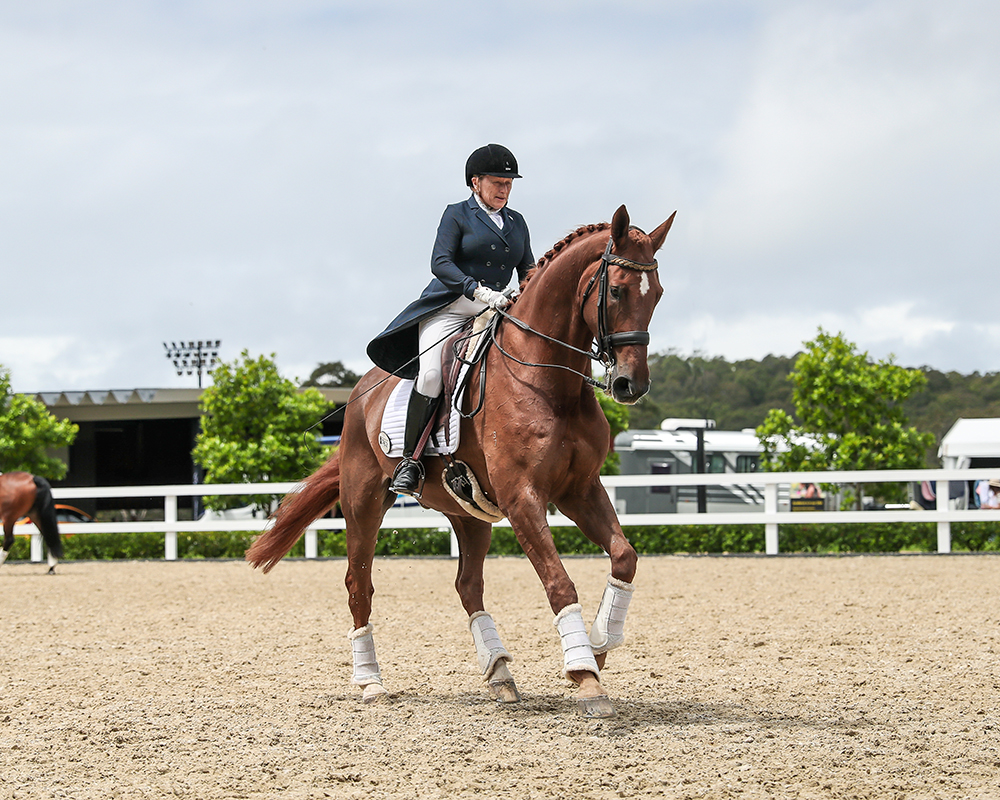 The FEI has recently determined in dressage that a clicker is a ‘gadget’ and therefore is banned from use at any FEI dressage show. © Amy-Sue Alston.

The FEI has recently determined in dressage that a clicker is a ‘gadget’ and therefore is banned from use at any FEI dressage show. In Australia we come under the FEI regulations, so a clicker is banned from use at Equestrian Australia dressage competitions too. Of course, you can’t use it in a competition arena, but no-one would want to anyway, as the horse would stop for his treat, the actual reward that the clicker tells him will come next. Other items classed as gadgets according to the FEI dressage rules include bearing reins; side, running and balancing reins; and nasal strips. You will see that many of these are allowed in other disciplines. Banning the clicker clearly discourages the use of positive reinforcement. I find a clicker a helpful tool and I like to use it to help my horse stay calm, focused and motivated in his work. My Grand Prix horse is a sensitive, hot horse. He loves his carrots and seems to like the clicker training.

Most traditional horse training uses the learning strategy of negative reinforcement. You take something away when the horse does the behaviour you are training. You want him to move forwards, so you put your legs on (the signal), and when he moves forwards you remove the legs. It is removing your legs that reinforces the going forwards. Thus it is the release of pressure that trains. We use this to teach a horse to yield to any pressure. This includes stop, turn and slow to the reins, go forwards from the legs, yield the hindquarters sideways from the pressure of the leg to produce the lateral work as well. Negative reinforcement is not punishment and is not always aversive or unpleasant for the horse. Good trainers will always use the smallest signal (aid) they can. The pressure applied is a signal to the horse that is removed when the horse does what is asked.

I set out to write an article outlining the science behind the use of PRT expecting to find a clear body of literature that supported it. I had heard podcasts explaining that positive reinforcement stimulates the brain’s pleasure pathways through the neuro transmitter dopamine, and that negative reinforcement stimulates the stress and fear pathways mediated through noradrenaline and the amygdala.

If this is true, then it is a no-brainer to me that we should be using a lot more positive reinforcement in our training. But when I went to find the research that showed this, I found that it is definitely not that straightforward. The literature is difficult to read due to lack of clarity about the terminology. There is some very poor-quality science in amongst the good stuff. Even a 2017 leading article did not provide any kind of answer to the question of which is better, positive or negative reinforcement. I didn’t find clear evidence that PRT is faster, or compelling evidence that it is better.

It turns out that the dopamine (pleasure) pathways and the noradrenaline (stress) pathways – being very close to each other – are interconnected, and it is likely that when we or our horse perform a behaviour that we are trained to do, we get a little burst of dopamine, a little bit of pleasure, regardless of whether the behaviour is trained by positive or negative reinforcement. We even get that dopamine burst in anticipation of success, rather than success itself.

Positive reinforcement is said be faster, maybe 40% faster, but only in some studies. It may be that negative reinforcement is faster and more effective in some circumstances; for example, when a horse is stressed, or when you are training a response that you need the horse to perform when he is stressed. Horses trained with positive reinforcement have been shown to seek more contact with people, but these horses did not show evidence of being less stressed than their stablemates when cortisol was measured. There are studies investigating whether oxytocin, the “love hormone”, increases with positive reinforcement, but these are not conclusive. More studies could be done to explore the effects of training style on stress using heart-rate variability or cortisol.

“Positive reinforcement is
giving a reward
after the
behaviour you want.”

If an aid is a signal to help the horse understand what you want him to do, then a clicker is an aid. A clicker does no more and no less than any specific noise you can make, a low whistle or a cluck. It is convenient to use a clicker when training riding horses as a clicker attaches easily to a whip handle. If a gadget is something that provides pressure that compels a horse to yield (like draw reins), then a clicker cannot be a gadget. The FEI should be helped to understand this and review their determination, and play their part in genuinely promoting the welfare of the horse by encouraging the use of positive reinforcement in training.

My heartfelt thanks to Dr Andrew McLean and Trish Kruse for their help in preparing this article.

*There has been some academic debate about whether the clicker functions as a secondary reinforcer, i.e. that the horse feels rewarded by the clicker; but that this effect will extinguish if you don’t feed the horse after you click. The clicker may form a bridge between the response you want and the reward, bridging the time and keeping the response in the horse’s mind. EQ

So You Want To Go To The Games? – Equestrian Life, September 2021 issue

Taking The Plunge With The Lunge – Equestrian Life, June 2021 issue

Make the Most of Your Seniority – Equestrian Life, February 2021 issue

The Importance of a Trusting Relationship – Equestrian Life, November 2020 issue

Submission or Stress? Something to Chew On – Equestrian Life, August 2020 issue