An undersized crossbreed with exceptional jumping ability, Jappeloup won the hearts of all of France when he took gold at the Seoul Olympics in 1988. The movie of his life story went on to win hearts all around the world. 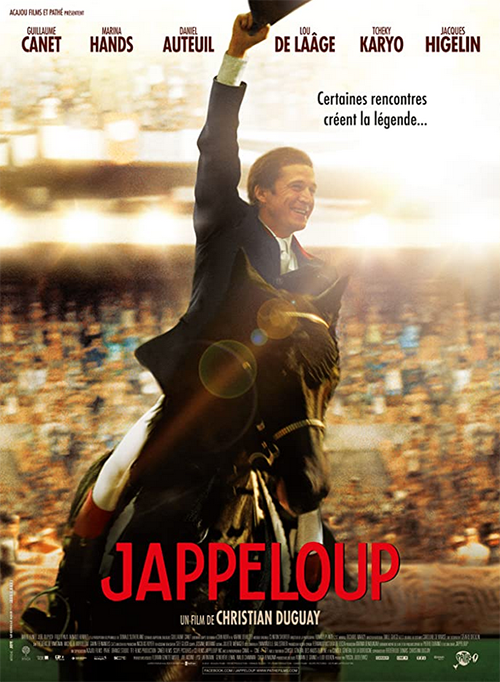 When a French film producer was wandering through a bookstore, a front cover caught his eye. It pictured two horses – one black and small, the other white and large. The book was Jappeloup/Milton, about two world famous showjumpers.

The film producer, Pascal Judelewicz, bought the book and took it home. After reading it he made the decision to one day make a film about the small black one and his rider, Pierre Durand. Nothing happened for 10 years.

“Durand gave me his permission to make the film but I didn’t think I had the wherewithal to put together such an ambitious project,” says the producer. “It stayed on the backburner until 2006, when my daughter, who’d taken up riding, began to enter some serious showjumping competitions. Accompanying her to events, I discovered that, more than the emotional connection with the horse, it was the sporting challenge which got these people excited.

“I discovered that the jumping world involves a lot of down-to-earth folk. People who get up at the crack of dawn to ride through the mud for hours, swapping between several horses to find their best partner for competition,” observes Judelewicz. “Many teach in the afternoons to earn a living. And at the weekend the top riders mix in the well-heeled world of competitions sponsored by luxury brands. Jumping had never been brought to the big screen before, which made it an interesting subject.”

The filming of Jappeloup finally began in 2011. Jappeloup de Luze, who was only 15.2hh, is now considered one of the greatest showjumping horses of all time. He was from unlikely breeding — by a French Trotter Tyrol II out of Vénérable, a thoroughbred by Oural.

At the beginning of the 1980s, Pierre Durand had abandoned a promising legal career and thrown himself into his true passion, showjumping. With his father’s backing, he gambled everything on a young horse who no one else had any faith in: Jappeloup. Too small, stubborn and impetuous, he nonetheless had a remarkable jumping ability. The pair competed so successfully they were selected to represent France at the LA Olympics in 1984. It was a disaster. Jappeloup threw Durand into a jump, his bridle came off and he galloped back to his stable leaving his rider to depart on foot.

Durand had to confront this public humiliation in a global arena. He could have thrown his hands in the air and given up, but with the help and encouragement of his wife, Nadia, and groom, Raphaëlle, he kept on going, regained his horse’s confidence and built a relationship that took them to victory four years later. At the Seoul Olympics in 1988 he won a gold medal, which Durand tied onto Jappeloup’s martingale before riding the lap of honour. 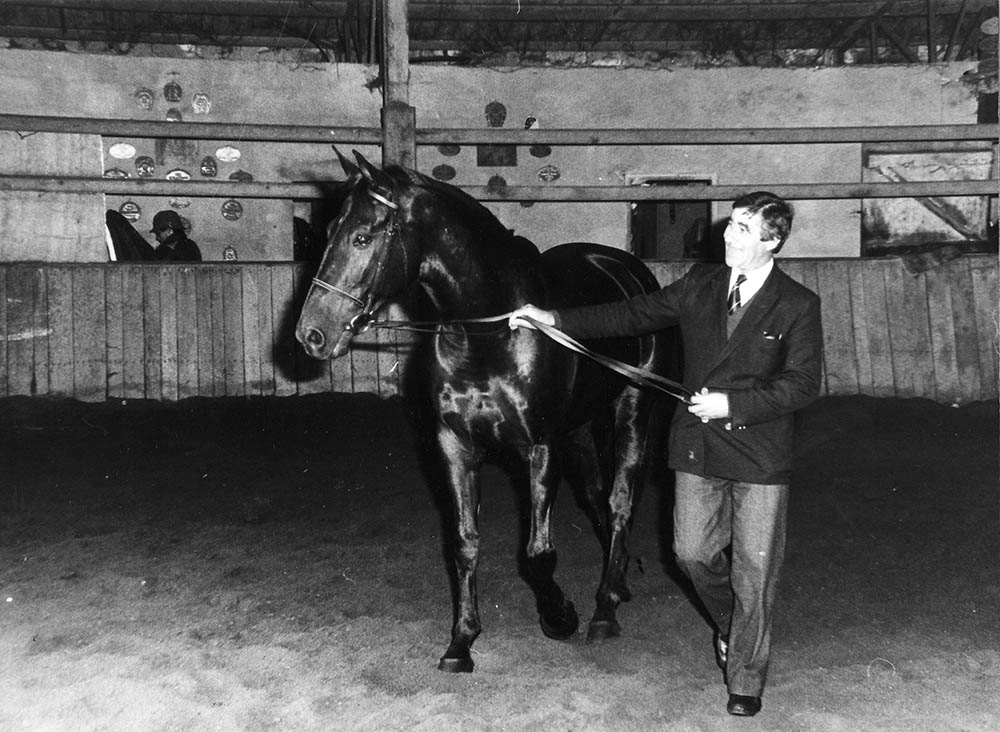 Henry Delage and Jappeloup; Pierre Durand purchased Jappeloup from Henry in the early 1980s, gambling everything on a young horse who no one else had any faith in. 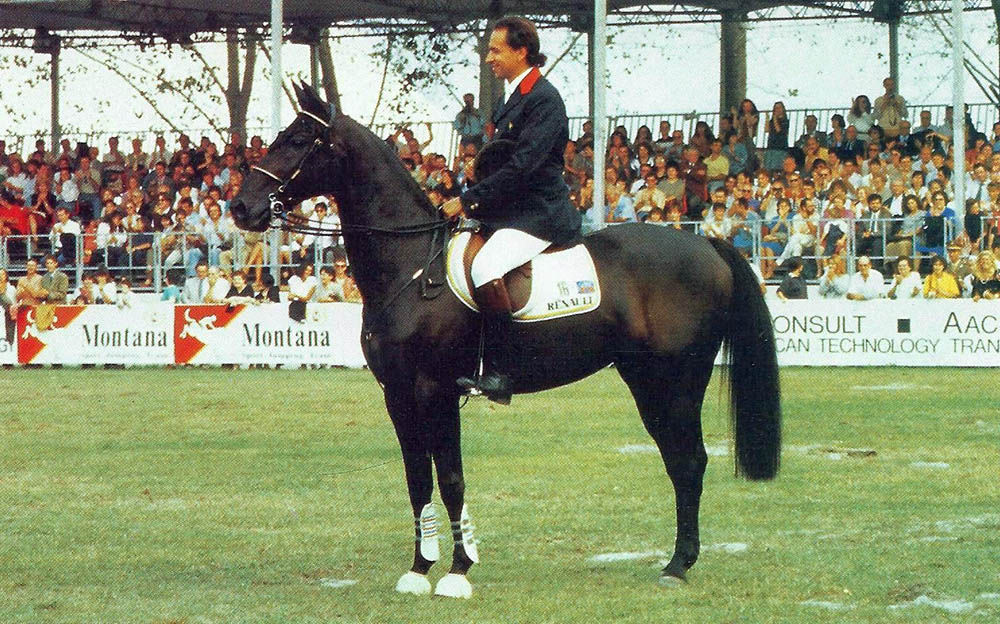 Pierre Durand with Jappeloup at the 1991 CSIO Pavarotti International in Modena. 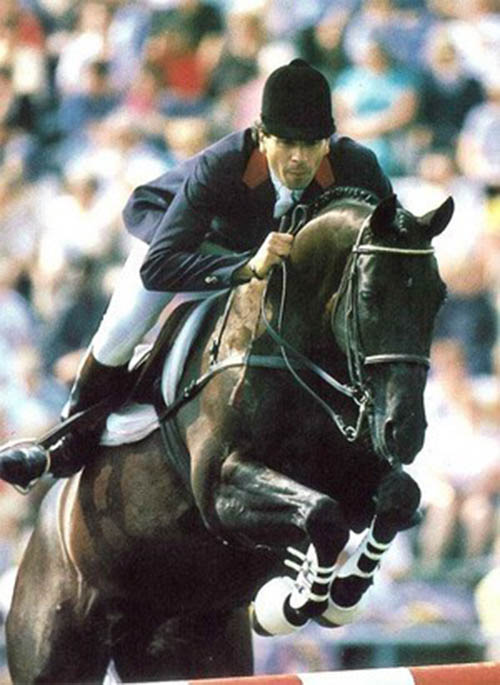 Jappeloup and Pierre Durand competing at the Seoul Olympics.

Unlike so many horse movies, Jappeloup’s principal creators and players all had equestrian experience.

GUILLAUME CANET — Guillaume Canet gave up riding after suffering a serious showjumping accident. He wrote the script and played the central character. “I only got on a horse six weeks before the start of filming,” he recalls. “I hadn’t jumped any rails for 20 years and I had to get back into competition condition. Fortunately, we were filming in chronological order, from a small event up to the Olympics.

“The shoot began in Fontainebleau where we condensed all the competition scenes into three weeks. I spent eight or nine hours a day in the saddle, which meant I had to spend an hour and a half every evening in the hands of a physiotherapist!”

Canet also had to ride two quite different Jappeloups. “The horses who were the major doubles had to be ridden in diverse styles. The first, Sympatico, was a very small horse who looked a lot like the real one. He jumped very well, but was 22 years old, so we had to go very easy on him. The official double, Incello, was bigger and younger, and we used him for jumping the big obstacles, like those in the Olympics scenes.

“But there were also five or six others that played Jappeloup at various stages of his life and were used in wide shots.”

(Interesting to note that when Canet finished work on the film, he went back to competitive jumping. “I finished fifth at the Gucci Masters in Paris and I was super happy!”)

MARINA HANDS — Durand’s wife, Nadia. Formerly a member of the French junior showjumping team, Marina Hands wanted to become a professional rider but didn’t feel she was good enough; so went to acting school, instead.

CHRISTIAN DUGUAY — Director and a former member of the Canadian junior showjumping team. Christian happily recalls some of the special effects in Jappeloup:

“They were there to help recreate the crowds at events. On the shoot, those competition scenes were the most difficult to film because we had to make do with just imagining the huge pressure on the rider and the horse that comes from thousands of spectators. The fact that Guillaume Canet could do all the jumping scenes was a great advantage. We’d never have had the same authenticity if he hadn’t been so committed, both as an actor and as an athlete. It’s like when Rocky fights: you believe in it because it’s really Stallone in the ring.”

Casting the horses was a lengthy process for this director. “We had to find horses that were both actors and athletes; young horses capable of tackling the jumps, others for the stunts and close-ups, but all with a fairly similar morphology. It was a real headache.

“My job was to find a way of filming that made Mario Luraschi’s Andalusians and the Thoroughbreds all pass for Jappeloup. Frédéric Cottier did an outstanding job assisting with the casting.” (Cottier was part of the French team that won bronze at Seoul).

“He also helped create the competition courses, which he’d meticulously studied, redesigned and put together so that you could see the degree of difficulty but with no risk of accidents.” 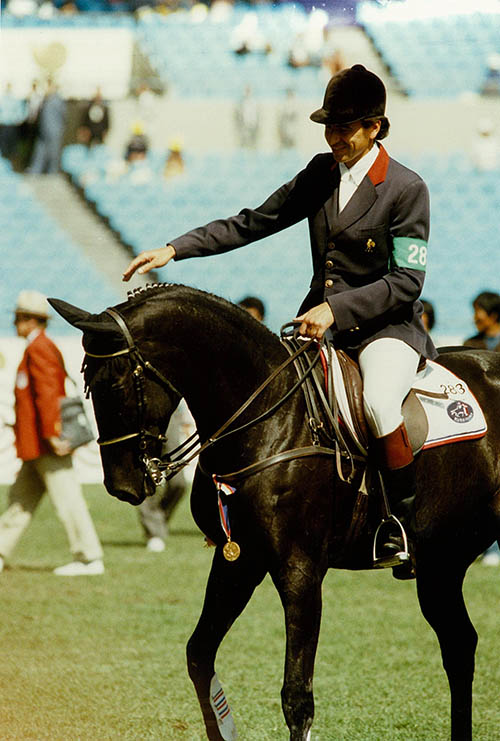 “Jappeloup… is now
considered
one of the greatest
showjumping horses of all time.” 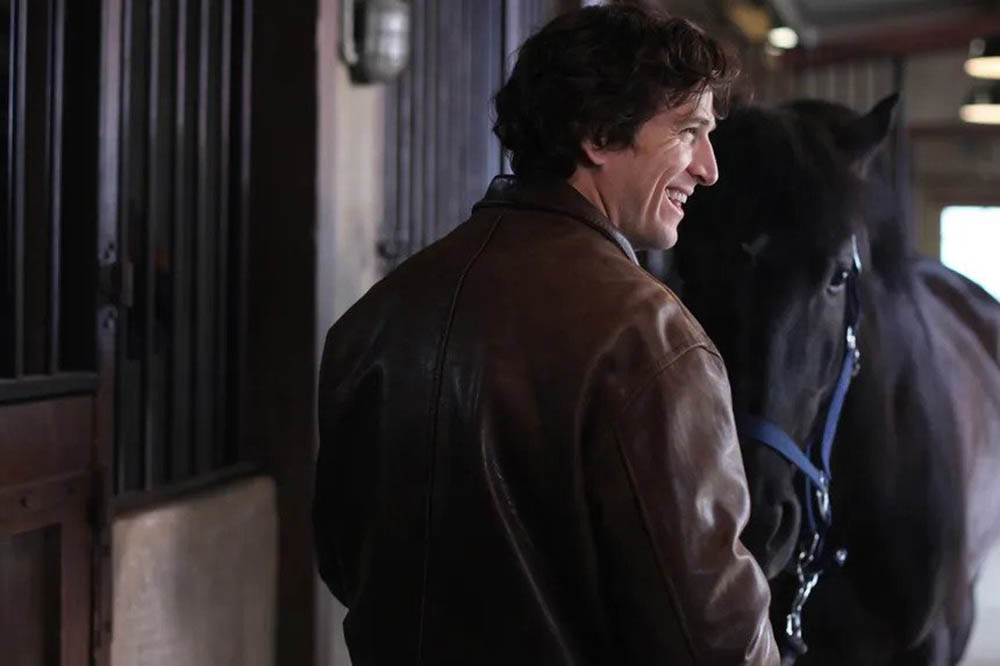 Some sequences were very risky, such as when Jappeloup is trapped in a burning truck, and when running down a highway amid speeding cars. But thanks to Luraschi these scenes were filmed safely.

This Italian equestrian master, based in France, trains horses for movies and live shows. He has a team of stuntmen and a stable full of Spanish and Portuguese stallions. His Iberian Baturo performed the stunt work in the truck and on the highway.

“He was amazing,” says Luraschi. “He remained perfectly still with the flames only a few inches from his head which was covered in a protective gel. He was so stoic despite the heat, the melting ceiling and the smoke. For the galloping scene on the highway, I directed him in long, transparent reins between the cars – he was so obedient.”

The trainer’s only regret was that, for the purposes of continuity, he had to shorten his stallion’s mane before filming. 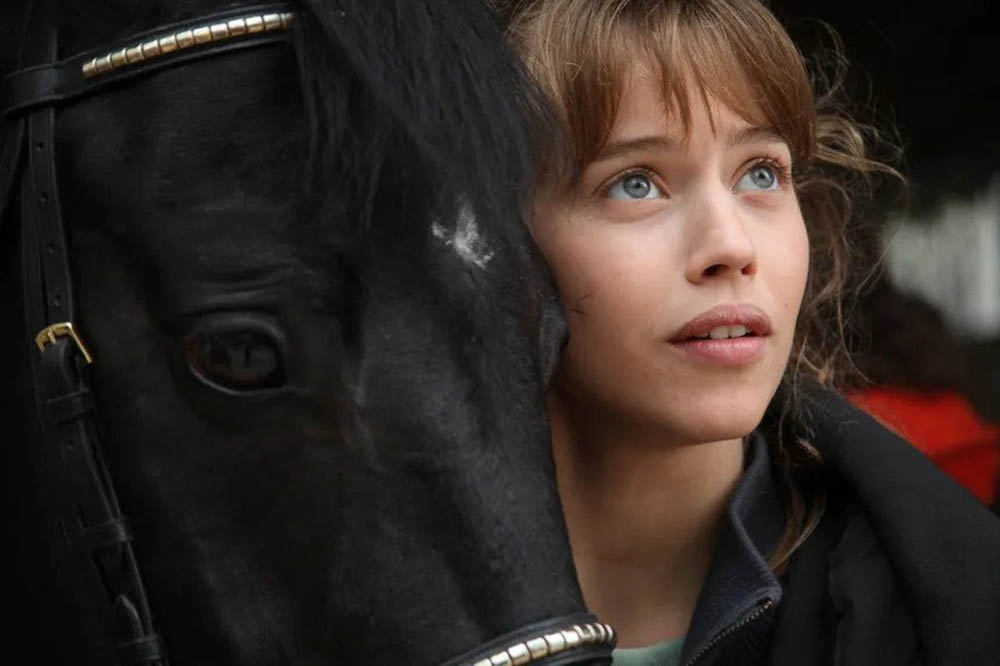 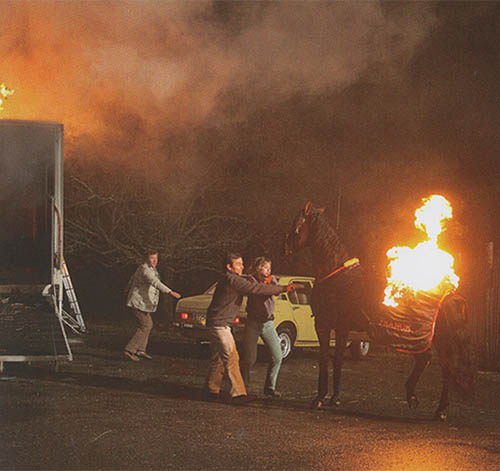 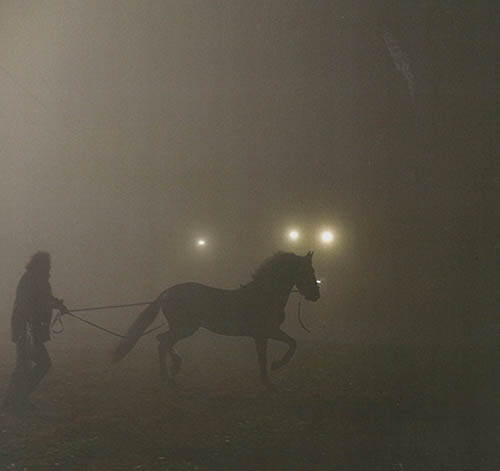 “The fact that Guillaume Canet
could do all the jumping scenes
was a great advantage.” 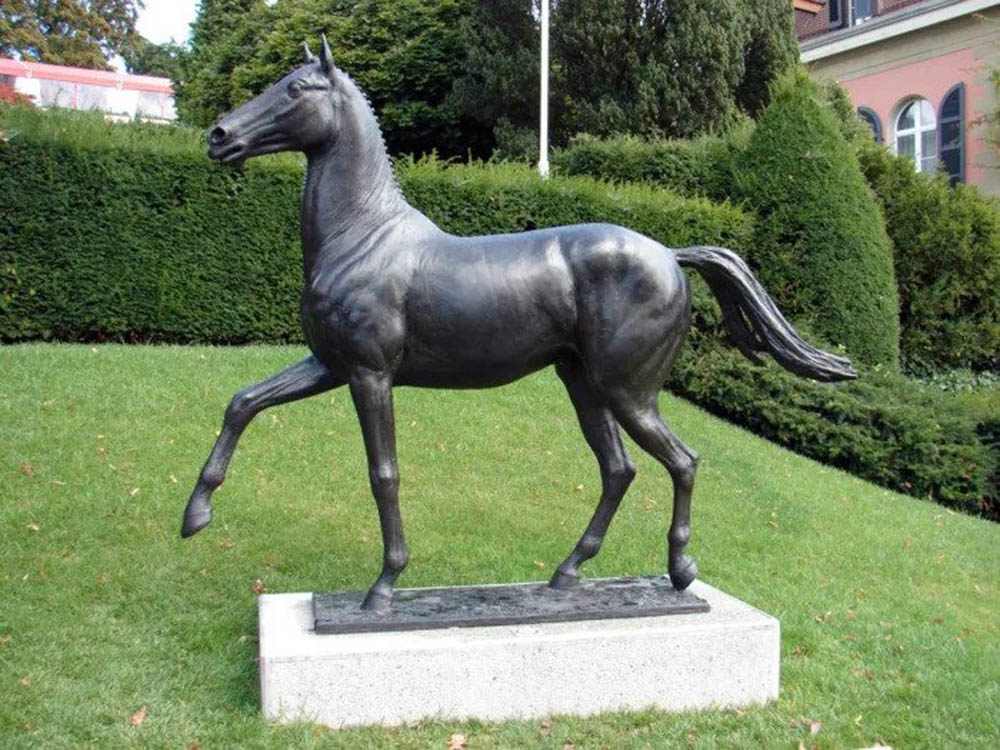 For years a sculpture of Jappeloup stood on the lawn at the Olympic Museum in Lausanne.

“We had to find horses that
were both actors and athletes.” 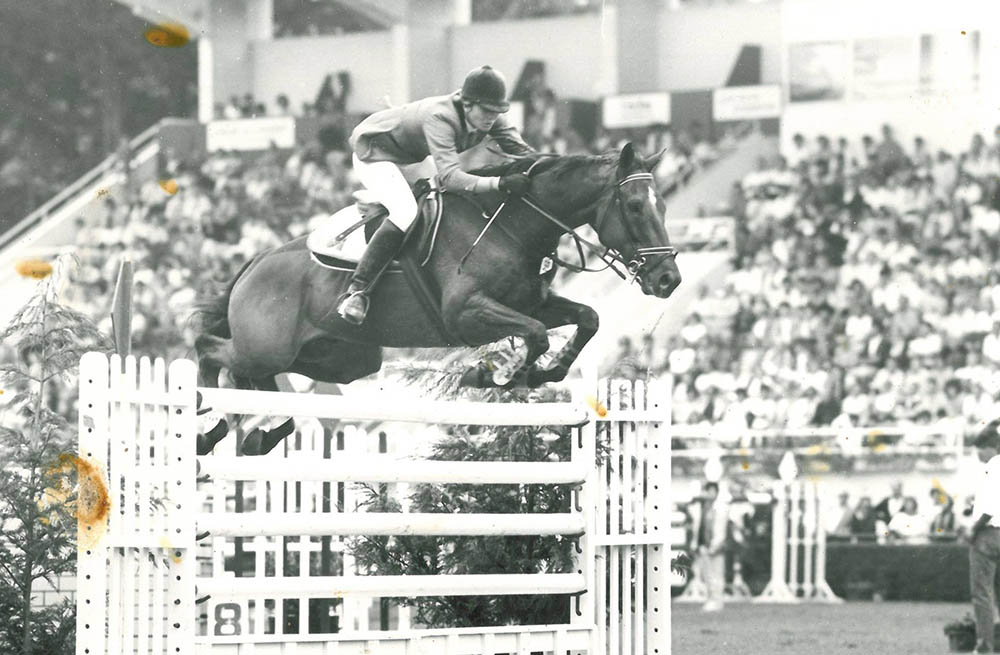 Vicki Roycroft and Apache in France, 1987.

“Whenever we entered the
ring the crowd would go mad.”

There were no regrets when this film was screened around Europe on its release in 2013. It did well at the box office and continues to be shown today on cable networks around the world. The Hollywood Reporter described it as “part inspirational sports movie, part bromance between a guy and his prize-winning horse… offering up a rather classic mix of stunts and sentiment before galloping ahead to its stirring equine finale”.

Jappeloup de Luze was an amazing, against-all-odds showjumper. For years a sculpture of the little gelding stood on the lawn at the Olympic Museum in Lausanne. It has now been returned to his rider.

Vicki Roycroft remembers Jappeloup well – she too had a little horse named Apache, a 15.2hh OTT Thoroughbred she had bought for $500 and competed on overseas.

“I went to Europe for the first time and jumped with him in 1987. Jappeloup was competing at the top level. I’d watched him at the 1984 Olympics as I was in LA with the Australian eventing team and I saw poor Pierre getting dumped. After that happened the horse was almost sold to one of Joe Fargis’ clients, but that didn’t happen as it didn’t pass the piroplasmosis test.

“I got to know Durand on the 1987 circuit; he was such a lovely guy and today is a personal friend. His horse was fabulous – careful, athletic and agile, and it was he who produced it.”

Often Vicki and Pierre would be in line-ups together on their two little horses, and towering next to them would be the lower placed thumping big warmbloods. “European spectators loved Apache and Jappeloup; whenever we entered the ring the crowd would go mad. We competed many times together and Apache would often finish in front.

“I would love to have ridden in Seoul. My horse was ranked in the world’s top 20, but there was no High Performance funding then. We’d won the Rome Grand Prix and people were knocking each other down to buy him.”

Alan Bond wanted the horse for his daughter, Susanne, and made her an offer too good to refuse. “It set up Wayne and me to do a lot of stuff we could never had done,” she declares, “but it still broke my heart at the time. Apache then incurred an injury and for much of ’88 was out of action – so maybe that was fate.”

Vicki bought him back when he was 19. “I intended to retire him but I did another season after I came back from Europe because he looked so good. He got to mini-prix, won some prestigious classes and then he won the warm-up for the World Cup at Horseworld. I thought it was time to finish on a good note and retire him.” Apache is buried in a field on her Mt White property on the NSW Central Coast.

Jappeloup’s retirement ceremony was held at the Eiffel Tower in Paris. Sadly, he died three months later of a heart attack. He was 16 years old. EQ

Next month in Equestrian Life’s series on Horses and Movies, My Friend Flicka.