So, the Tokyo Olympics 2020 are over and equestrian sports the world over in all three disciplines are away and running and producing new superstars for the future. 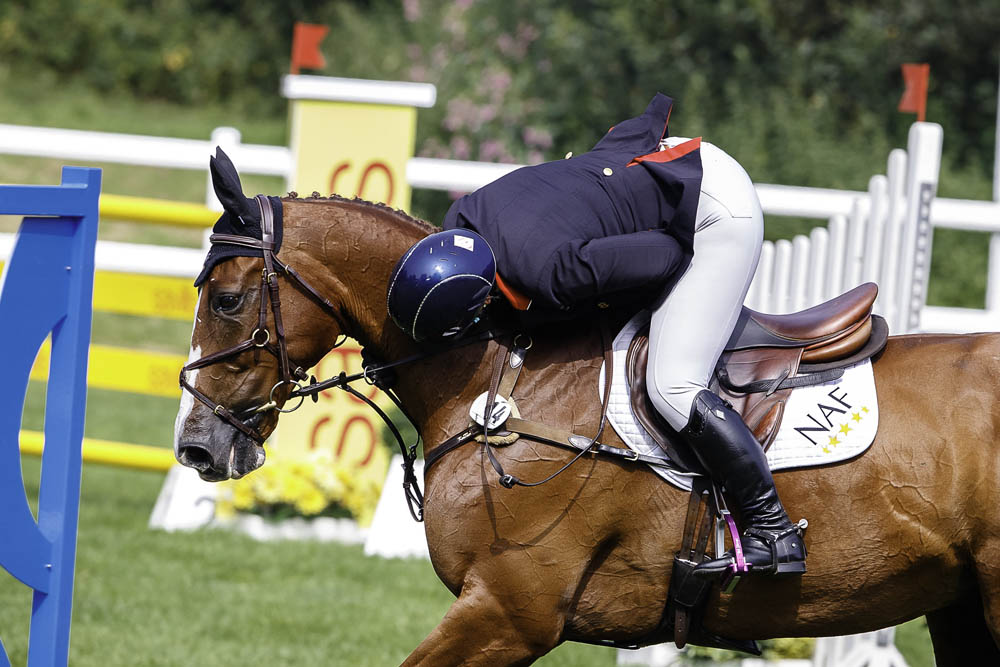 Chilli Knight debuted at five-star level and won with Gemma Tattersall on board at Bicton. © FEI/Libby Law Photography
Exceed your horse's expectations with the Proteo Switch. 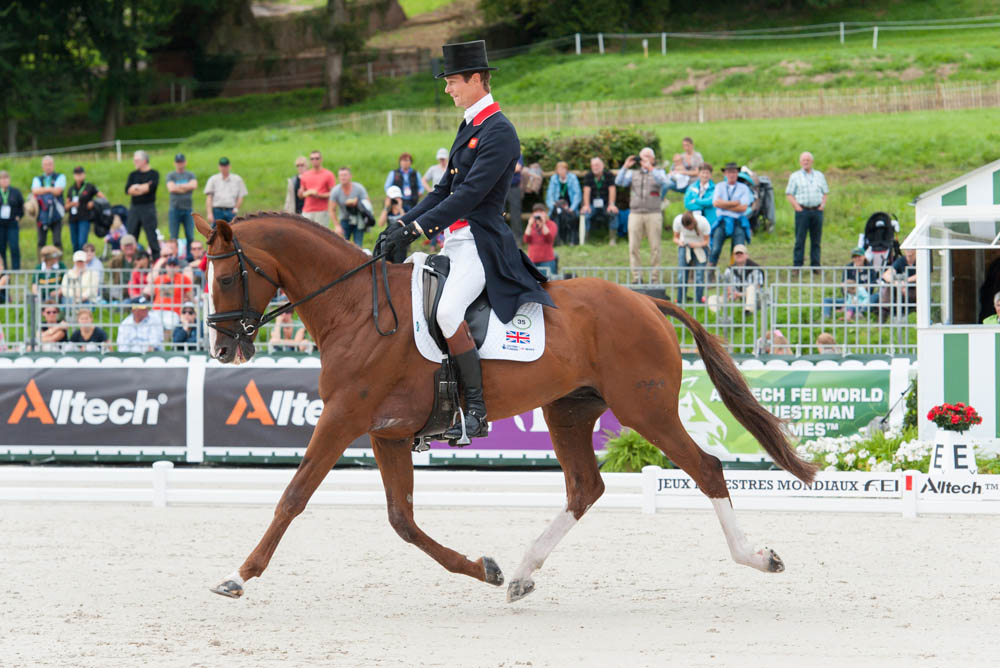 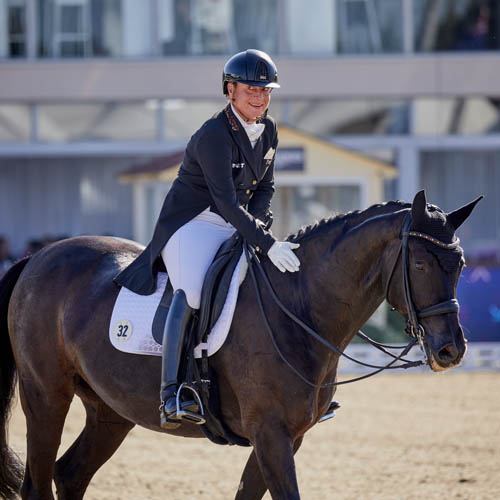 Isabell Werth will retire Weihegold OLD in the near future. © FEI/Liz Gregg

In actual fact, some of the Tokyo Olympic stars have stepped off the plane back in their home countries and continued their stellar performances. We will get there in a moment. Most countries are up and running, that is, except for Australia, which is locked down with the Covid-19 pandemic. Well, New South Wales and Victoria are locked down and the other states won’t let us cross their borders! I don’t blame them!

ENGLISH EVENTING ON THE MOVE

England is seriously affected by the Covid-19 pandemic, however, this did not stop them from running a CCI5* at Bicton from 3-5 September. Burghley CCI5* is normally the big five-star autumn event held in England. With the cancellation of Burghley, Bicton ran in its stead. The winner was Gemma Tattersall on her young 11-year-old chestnut gelding, Chilli Knight. Gemma finished on her dressage score of 27.9 penalties. This was the only combination in the CCI5* to finish on their dressage score. This was also Chilli Knight’s very first five-star competition.

Just keep in mind that the individual gold medallist at Tokyo was the German rider Julia Krajewski riding Amande De B’Neville who finished on 26 penalties. The English team won the team gold medal and here in Gemma Tattersall and Chilli Knight is another English combination flexing muscle for the future, scoring 27.9 penalties, which would have given her a silver medal at the Tokyo Olympics.

So, the point being is that England did win the team gold medal convincingly at Tokyo, and if we in Australia have any thoughts of moving from our silver team medal position to a team gold medal at the Paris Olympics in 2024, then we are really, really going to have to work hard. The English are not resting on their team gold medal laurels and are already producing combinations that can lay down individual medal-winning scores right now.

In my last column, I did comment on the fact that eventing breeding lacked any rhyme or reason in the production of the top Olympic horses. I also commented that I thought a pattern of likely breeding stallions would appear in the not-too-distant future. Very interesting is the breeding of Chilli Knight. He is by Chilli Morning, who is the only stallion ever to win the CCI5* Badminton Horse Trials; generally considered one of the greatest eventing stallions in the history of the sport, he died suddenly in his field last year at 20 years of age. Chilli Knight is from the first crop of Chilli Morning foals. The dam of Chilli Knight is Kings Gem, who competed at five-star level, also with Gemma Tattersall. So Chilli Knight was bred through and through to be a five-star winner. Interestingly this was the very first CCI5* that Gemma Tattersall has actually won herself. It is Gemma’s opinion that Chilli Knight is the best cross-country horse in the world at the moment. Gemma has ridden and campaigned Chilli Knight since he was just broken in.

Here in Australia, through frozen semen there are quite a few Chilli Morning offspring. Shane Rose, who was part of the Australian silver medal winning team from Tokyo, has a couple of three-year-old Chilli Morning youngsters. Hazel Shannon, who has won the CCI5* Australian International 3-Day Event (Adelaide) on three different occasions with WillingaPark Clifford, also has a couple of three-year-olds who Hazel says have very quiet and trainable temperaments. One of Hazel’s three-year-olds is owned by Terry and Ginette Snow from Willinga Park. I also have a rising three-year-old colt called Coolness R, which I am hoping will prove to be a top-of-the-range competition horse. It will be very interesting to follow the Chilli Morning genetics and see if they evolve into a blue-chip genetic dynasty for eventing.

CHANGE OF GUARD IN DRESSAGE

Isabell Werth recently announced the retirement of Bella Rose (the mare was due to compete one last time at CHIO Aachen, but a severe bout of colic requiring surgery meant she didn’t compete — by all reports she is recovering well). It has also been confirmed that Isabell’s other top mare, Weihegold OLD, will be retired either at the Frankfurt CDI-W in December or at the 2022 World Cup Finals in Leipzig, which take place in April.

Isabell Werth will retire Weihegold OLD in the near future. © FEI/Liz Gregg 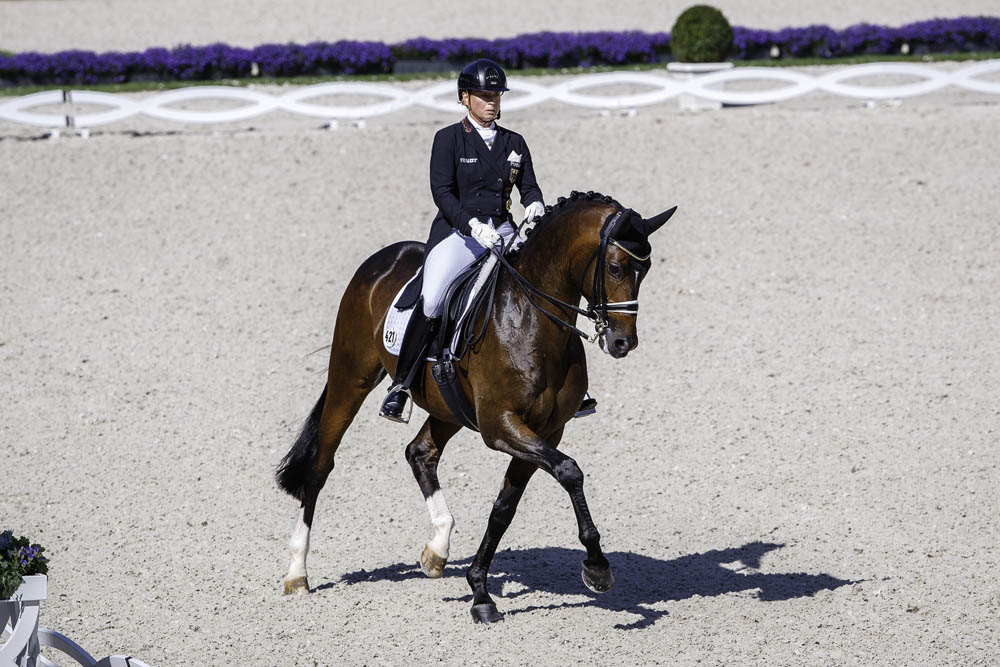 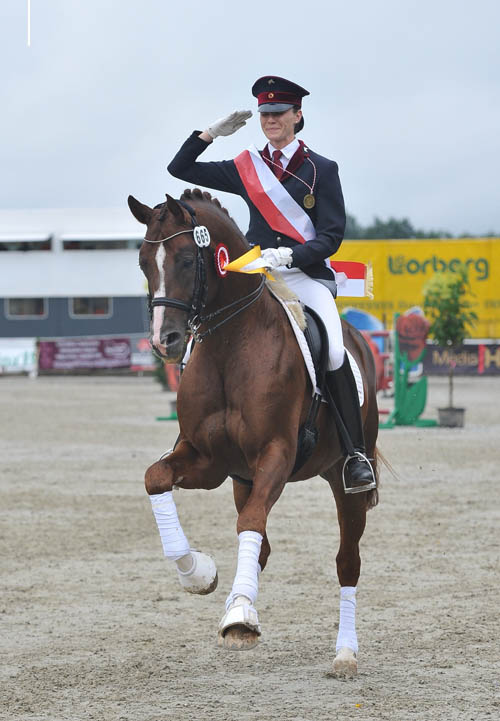 These are two mighty horses to retire at the same time and most riders would never be seen again. The shoes left would, for most people, be too big to fill with another horse. However, Isabell Werth is Isabell Werth and without a doubt she is the mightiest dressage rider, dressage trainer and dressage competitor that the world has ever seen. She does have another young Grand Prix horse in DSP Quantaz, who is an 11-year-old bay stallion by Quaterback out of a Hohenstein mare. DSP Quantaz is actually leased by Isabell from her pupil, Victoria Max-Theurer from Austria. The lease runs out after the World Championships in Herning next year. It will be very interesting to see if the lease is then extended or Victoria takes over the ride. Already Isabell is scoring almost 80% in the Grand Prix at CDIO5* events with DSP Quantaz. This is huge! DSP Quantaz is scoring 10s for piaffe and passage. Breathtaking.

DSP Quantaz is by Quaterback and this may well lead to a new blue-chip dynasty appearing in the dressage world. Quaterback is by Quaterman 2, who is by Quando-Quando. Quando-Quando was the quietest stallion I think I have ever seen and was ridden by Australia’s Kristy Oatley at the 2008 Beijing Olympics for Australia. This just might be the beginning of a whole new era. Quite frankly, it’s very exciting. There are quite a few Quaterback horses here in Australia and his frozen semen is fairly readily available. There are also a few Quando-Quando horses in Australia, which have been very good dressage horses.

If DSP Quantaz does explode across the world scene, I think Australia will unexpectedly find itself well positioned to take advantage of this new set of genetics becoming more recognised. Surely somewhere along here we in Australia are going to produce dressage horses that will hold their own with the best in the world. 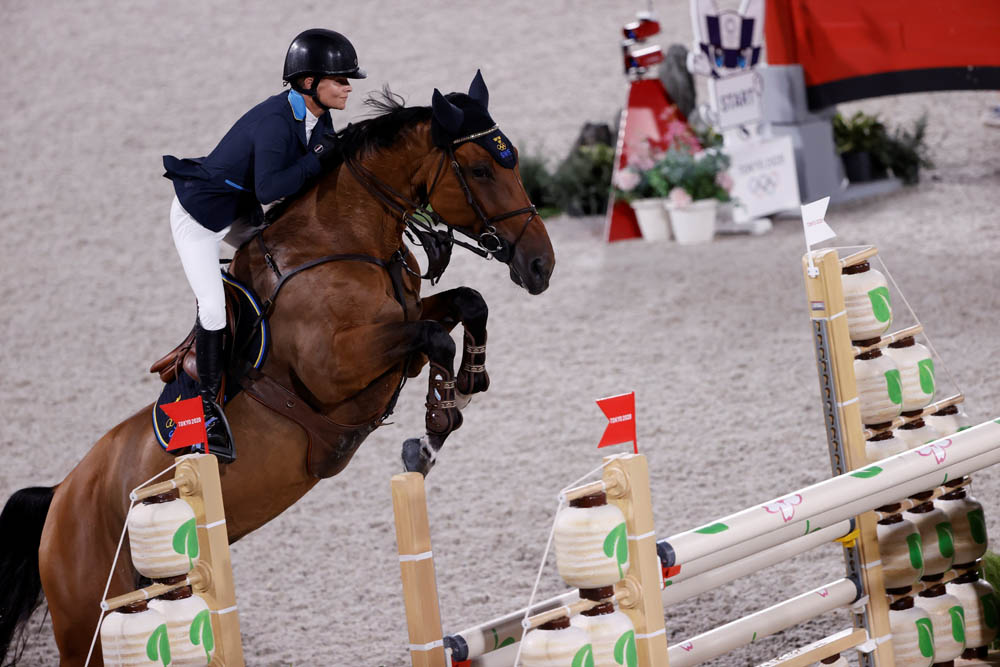 The Swedish show jumping team was brilliant at the 2020 Tokyo Olympics, convincingly winning the team gold medal, with All In ridden by Peder Fredricson being the only combination ever to win individual medals at two consecutive Olympics. They won an individual silver medal at the Rio De Janeiro Olympics in 2016 and then won the individual silver medal at the Tokyo Olympics in 2020. In fourth place individually was the horse King Edward ridden by Henrik von Eckermann. King Edward was the only horse in the show jumping discipline to not have even one rail down in the whole of the Olympic Games. Right behind King Edward, came the third Swedish team gold medallist, Indiana ridden by Malin Baryard-Johnsson. Sweden has not won a team gold medal in show jumping at the Olympics since Paris in 1924!

Indiana is a 13-year-old mare and is by the same sire as the silver medallist, All In, being sired by Kashmir Van Schuttershof. Indiana also has a very similar mare line to All In on her mother’s side. Malin has been riding Indiana for six years now and seriously believes that Indiana is the best jumping horse in the world. Malin started with Indiana when she was seven years of age. As a young horse, Indiana always had a spectacular jump but her rideability was not so great. Indiana always had lots and lots of power. Malin feels that Indiana was extremely difficult to train and that even today, if Malin is not concentrating on every single detail when competing, Indiana will become so distracted that you might as well not even start.

Malin describes Indiana’s personality as just different. Indiana’s first event back from the Olympics was the Longines Global Champions Tour at Rome, where she won. Malin and Indiana produced a clear and fast round in the jump-off. Malin feels that Indiana is perhaps the fastest and most careful show jumper in the world, and that she made a tiny judgement error at the Olympics in just how fast she had to go in the jump-off to win the individual gold medal. Malin blames herself entirely for this miscalculation, which was so costly. Malin stayed in Rome for a week to compete in a second leg of the Longines Global Champions Tour and again did extremely well, coming second on this occasion.

Malin and Indiana now have a golden ticket to Prague at the end of this year, which is called the Global Champions Playoffs, where they will contest the Longines Global Champions Tour Super Grand Prix. This is billed as the ultimate showdown of the Champion of Champions. This will be something all of us show jumping enthusiasts should keep an eye on. 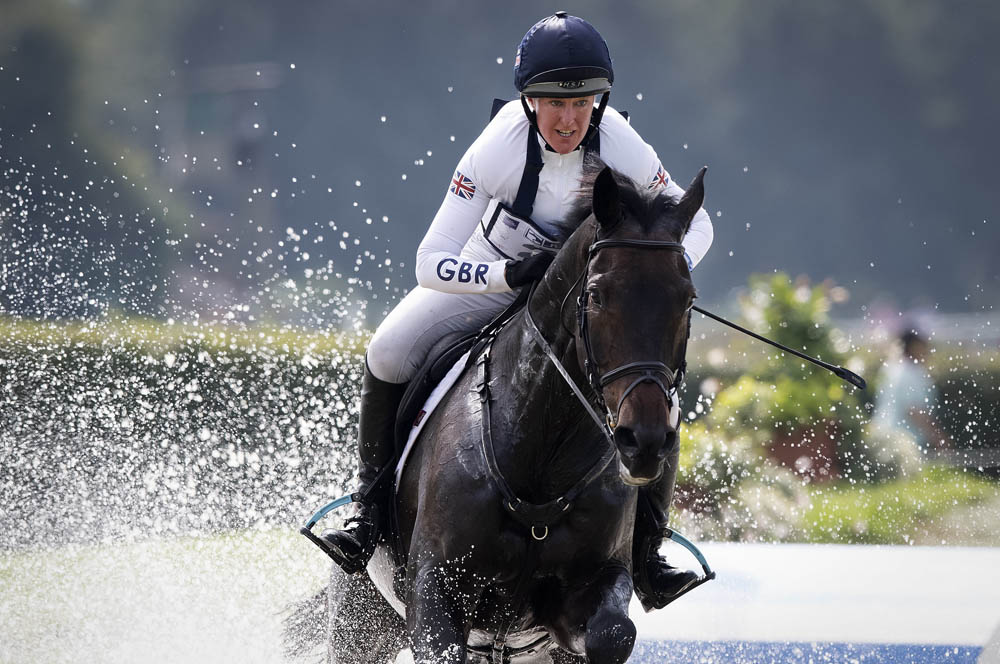 Well that’s it for this month. The British eventers are just going from strength to strength after winning the team gold medal at the Tokyo Olympics 2020 — and they’ve also just claimed team gold plus all three individual medals at the European Championships in Avenches, Switzerland (the team in order of individual placings was Nicola Wilson and JL Dublin, Piggy March and Brookfield Inocent, and Sarah Bullimore with Corouet). They are going to be damn difficult to round up next year at the World Championships and almost impossible to beat at the 2024 Paris Olympics. We need to go after them with everything we have.

The dressage world is about to lose two of the most outstanding dressage horses ever seen with Bella Rose and Weihegold about to be retired. Both of these horses have been trained and campaigned by the one and only Isabell Werth. In their place comes a very exciting young Quaterback stallion, who is tipped to light the world on fire. I am very much excited to see this.

The Swedes seem to have challenged and conquered the traditional custodians of show jumping excellence. I am not convinced that we have heard the whole Swedish story yet. The Swedish ‘B’ team recently came second at CHIO Aachen in the Nations Cup (Angelie Von Essen and Alcapone Des Carmille, Annika Axelsson and Cleo Z, Jens Fredricson and Markan Cosmopolit, and Petronella Andersson and Castres Van De Begijnakker Z). How could a ‘B’ team even get round the course at Aachen nevertheless come second? I feel there is a Swedish High Performance program or a directing individual who is implementing strategies that are clearly state of the art, but are also well outside the square. The Swedes are definitely getting something right. Keep an eye on them! EQ