Although it was the first television series ever filmed in colour, My Friend Flicka was originally shown in black and white. Only 39 episodes were ever filmed in 1956-57, but these were broadcast in syndicated reruns right up to the 1980s. 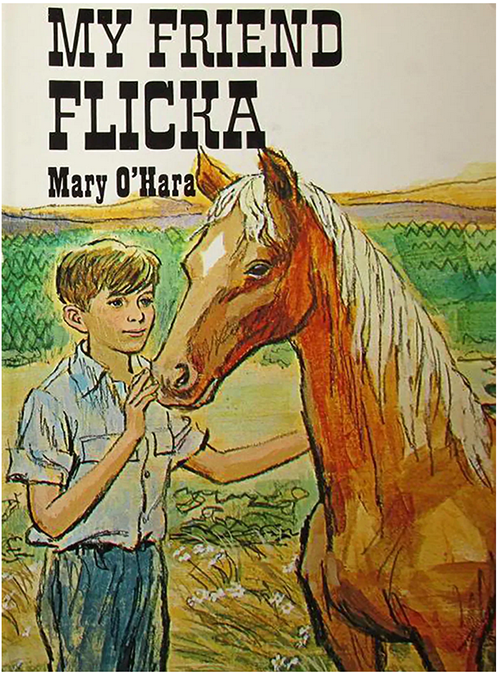 My Friend Flicka was originally a novel by Mary O'Hara.

The world was first introduced to Flicka, meaning “little girl” in Swedish, through a book written by Mary O’Hara, who had been a Hollywood screenwriter during the silent film era. She married a Swede who had worked horses in the US Army Remount Service and they brought a ranch in Laramie County, in Wyoming, smack in the middle of the American Mid-West. To help make ends meet during the Great Depression of the 1930s, Mary began writing Wyoming ranch stories. My Friend Flicka was published in 1941 and became an immediate bestseller.

Country Delight, an American Saddlebred, played the main role in Flicka, while the six doubles were all Arabians. McDowall didn’t like any of them. “I had really liked Lassie,” McDowall once said, “but the horse was a nasty animal with a terrible disposition – she kept stepping on my feet – in fact all the Flickas were awful!”

Interesting to note that McDowall’s stunt double for this, and most of his other childhood film roles, was Monty Roberts, who was to become the celebrated “horse whisperer” and a friend of Queen Elizabeth’s.

The equine supervisor on this feature was Jack Lindell, formerly a trainer in a travelling circus. His assistant, Les Hilton, later became famous for educating Mister Ed, who was featured in last October’s Equestrian Life. It was Hilton who was hired to train the horses for the Flicka TV series.

The star was a 15hh purebred Arabian mare originally named Wahana. She was owned by a Mrs Patricia Eaves of Santa Fe, New Mexico, who leased her to 20th Century Fox. The chestnut’s sire, Abu Farwa, had been born in California on the Kellogg Arabian Ranch, Pomona, and his sire, Rabiyas, was regarded as one of the all-time greats in American Arabian horse breeding. Abu Farwa sired 277 purebred foals, the majority of which were chestnut and many, like Flicka, had white markings. Her dam was Mehana, who had been imported to the US from Spain.

Hilton also trained the stunt double for the series – a Quarter Horse gelding named Goldie, bought by the production company from a racetrack in Mexico where he worked as a lead pony. His markings were not quite the same as the star’s. His blaze didn’t go down as far, and the shape of the white on his fetlocks was different. He was shorter and more rugged and stubborn than the mare. According to his trainer, Goldie loved bucking off baddies, but he would get mad when he had to learn anything new.

Riding was very new to Johnny Washbrook. The kid from Toronto, cast as the series’ juvenile lead, didn’t know a horse from a hockey stick and spent every day of pre-production with Les Hilton learning the basics of horsemanship.

Now in his mid-70s, Johnny Washbrook had never intended to be an actor. Because his brother stuttered, a doctor suggested he join a student theatre group, which would allow him to concentrate on his role rather than his stutter. Wanting to emulate his older brother, Johnny started to act as well – resulting in him landing several parts at the Canadian Broadcasting Corporation. One day he was asked to audition at 20th Century Fox.

“They’d been scouting for kids all over Hollywood for this new TV series,” he recalls. “They wanted me to do a screen test and I got the job.” His whole family then moved out to Hollywood. “I made $600 a week in 1955 and in the second year it went up to $800.”

Unlike the somewhat precious and precocious Master McDowall, this young actor loved his equine co-star. “A great horse and so well trained. All I had to do was virtually think what I wanted her to do and she sensed it.” 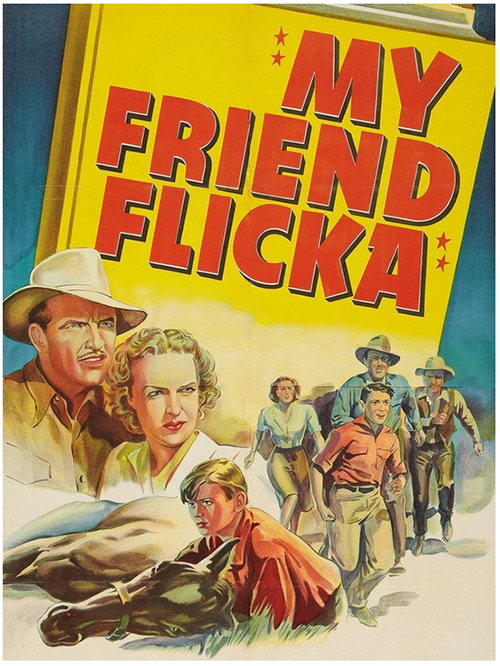 A publicity poster for My Friend Flicka.

Histories of My Friend Flicka have often stated that “the young star of the series became a very capable rider”. He wasn’t that great. His hands were everywhere and his neck reining was rough. Trainer Hilton used a very long-shanked bit on the mare and, as in so many cowboy pictures, the horse was tied to hitching posts by the reins. How she didn’t break her jaw remains a mystery. In some publicity shots Washbrook is standing next to the horse, smiling brightly while fiercely clutching the shank. Clearly Flicka was a very tolerant Arabian; Goldie would not have been so forgiving!

Just as Flicka had a double, so did the young actor – a 10-year-old girl named Steffi Epper. Her father was a professional stuntman, as were all her siblings. Before even becoming a teenager she had leapt from speeding cars, been thrown from the saddle, done stirrup drags and jumped off roofs. She did all the tricky scenes in My Friend Flicka, such as rearing, jumping and galloping through burning buildings. Washbrook had no problems with being doubled by a girl – after all, she made him look good.

Steffi stayed in the movie business for over 50 years doing stunts in such major films as The Blues Brothers, A Nightmare on Elm Street, Beverly Hills Cop and Total Recall. Surprisingly, she is still all in one piece and living in California. Johnny worked as an actor for 35 years then gave it away and went into finance. Four years ago he retired as senior vice-president of the Edgartown National Bank in Martha’s Vineyard. 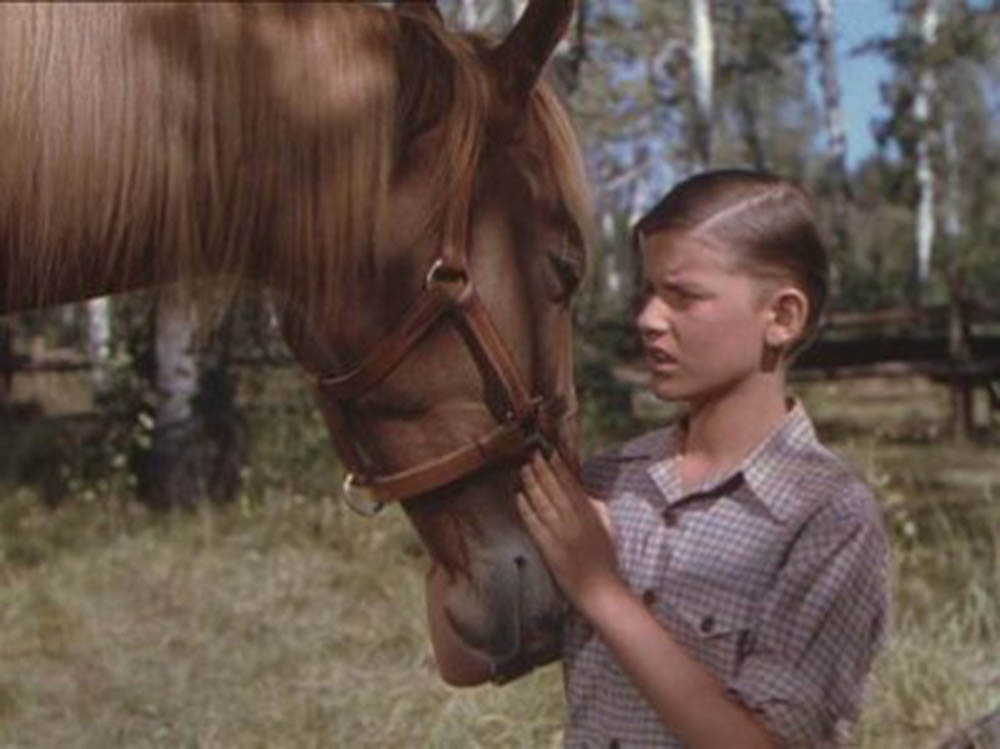 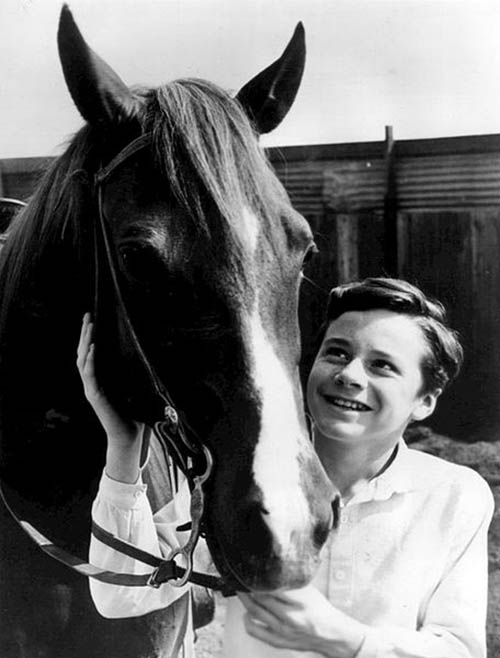 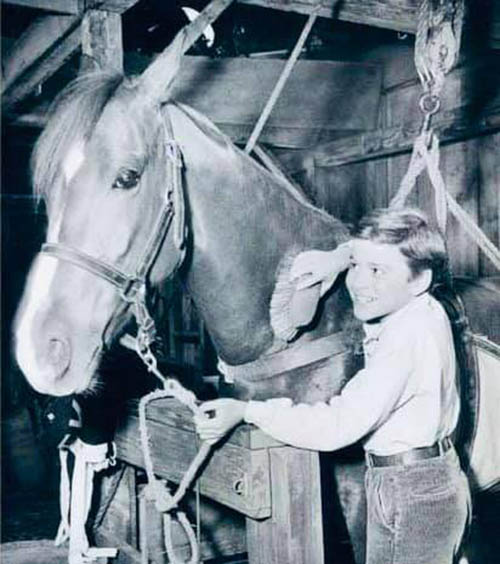 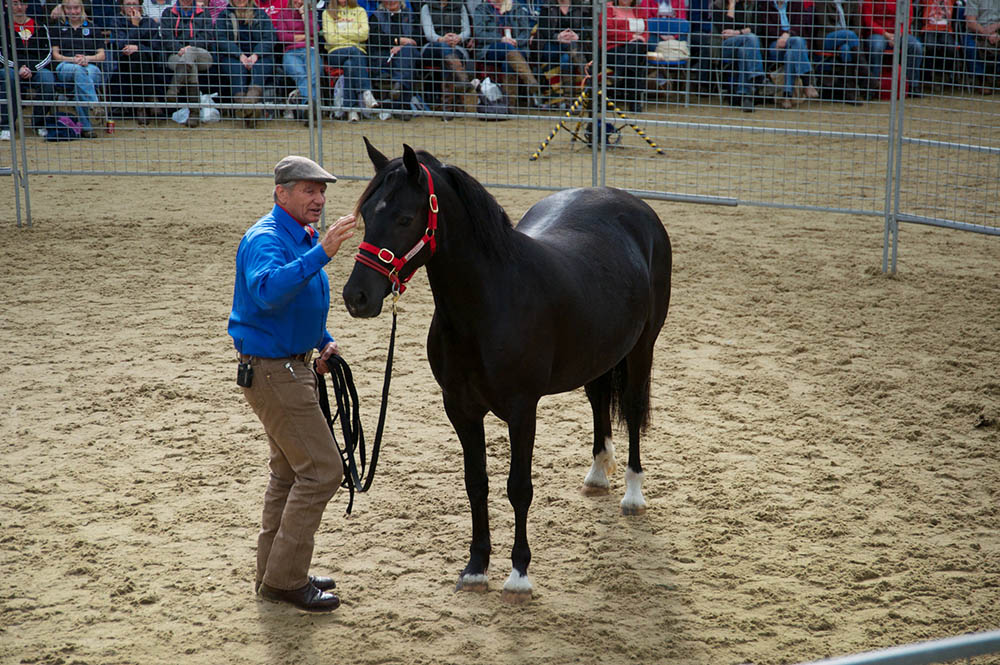 Monty Roberts (pictured here in 2015) was Roddy McDowall's stunt double in the 1943 film. 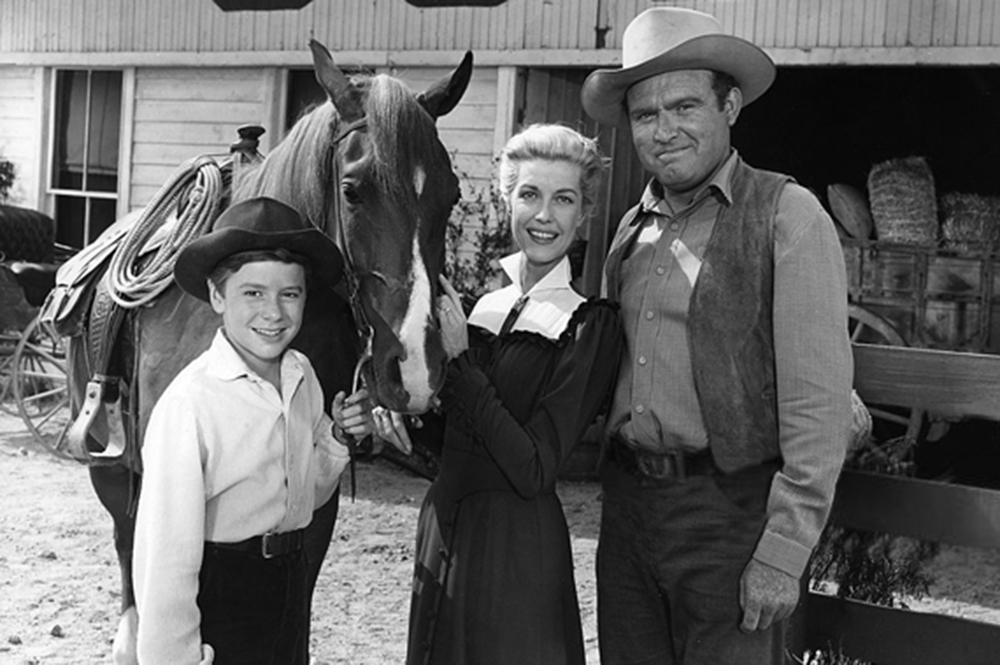 Flicka with Johnny Washbrook as Ken McLaughlin, and his on-screen parents played by Gene Evans and Anita Louise.

“I never really enjoyed riding other horses later in life because none could compare with Flicka,” he says. “And to this day she and I are still getting fan mail.”

At a ceremony in March 1958, the beautiful chestnut Arabian Flicka was awarded the prestigious Patsy Award – the animal equivalent of the Oscar – in recognition of her excellent performance in the television series. Sadly, 10 years later, she died while giving birth to her third foal after being bred to a Quarter Horse stallion, Tonto Bars Hank. She is most likely buried on a property near Hermit’s Peak, northwest of Las Vegas, New Mexico. 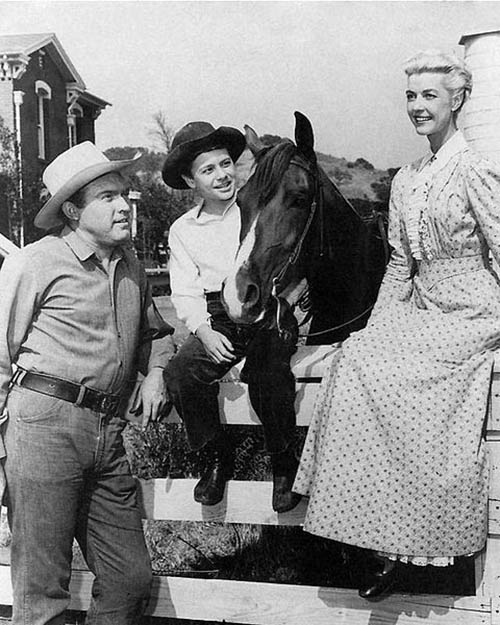 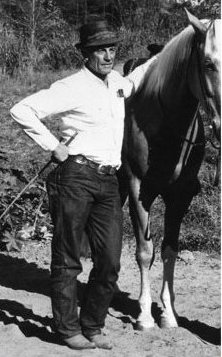 Les Hilton was assistant trainer for the original movie, and was then later hired to train the horses for the TV series. 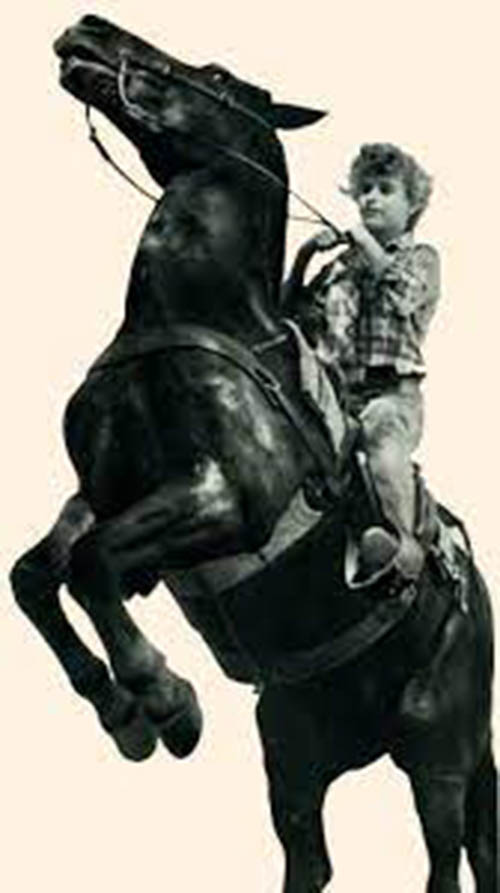 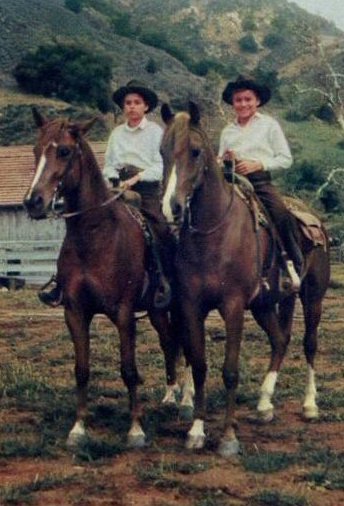 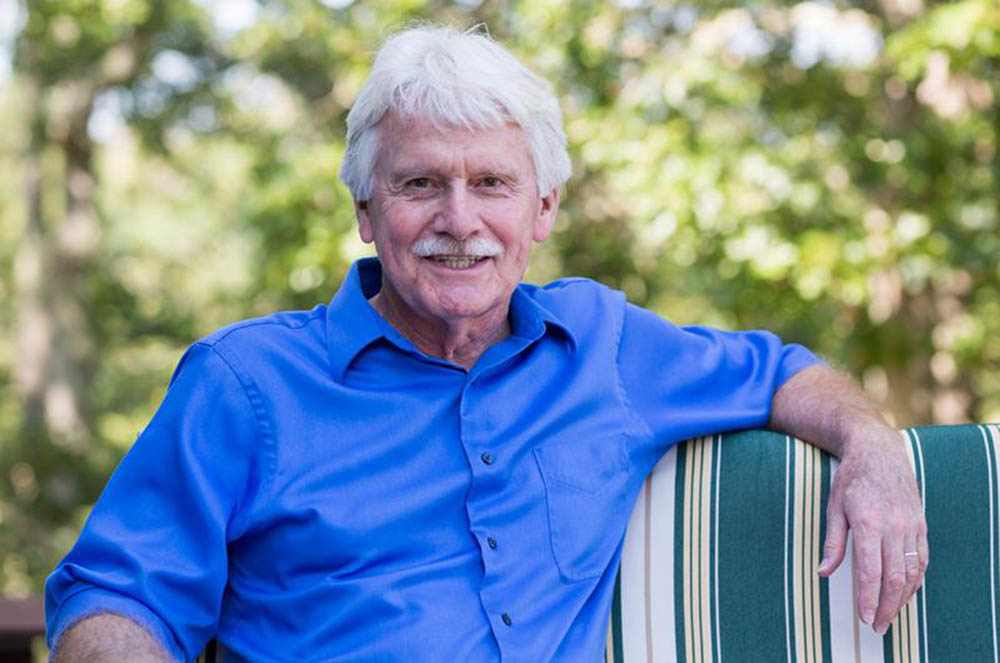 Johnny Washbrook worked as an actor for 35 years before going into finance. He retired four years ago.

The story of Flicka continues to draw audiences. A 2006 modern remake followed a tweaked storyline with a female lead, where 16-year-old Katy McLaughlin tames a mustang in order to prove to her father she can run the ranch. Directed by Michael Mayer and written by Mark Rosenthal and Lawrence Konner, the movie grossed $21 million in US theatres, and was a surprise hit in DVD sales. A sequel, Flicka 2, was released direct to DVD in 2010, and another sequel, Flicka: Country Pride, was released in 2012.

Next month in Equestrian Life’s series on Horses and Movies: CONCRETE COWBOYS, starring Idris Elba and presently screening on Netflix.

The Little Horse That Could (Jappeloup) –  Equestrian Life, April 2021