More than just getting Idris Elba’s award-winning backside into a saddle, ‘Concrete Cowboy’ is an enlightening portrayal of the contribution of African Americans to horse-riding culture. 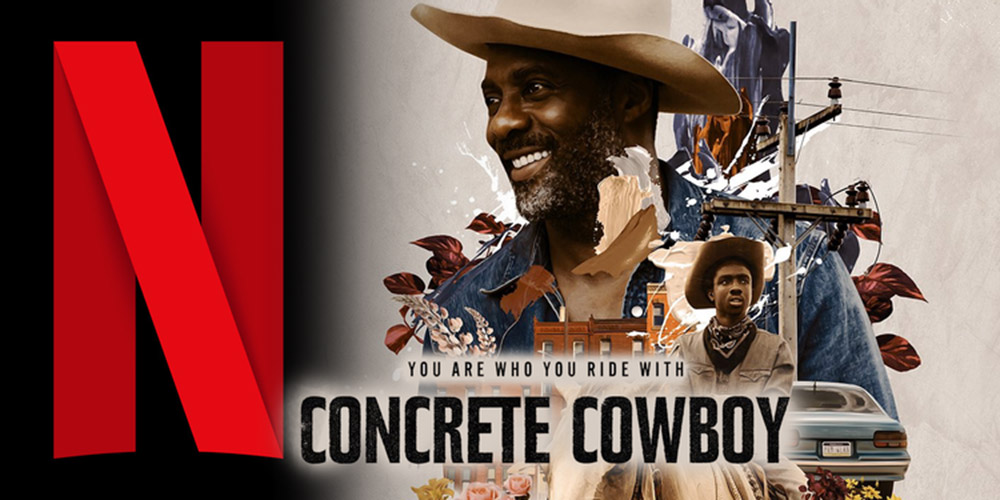 The Netflix poster for 'Concrete Cowboy'. 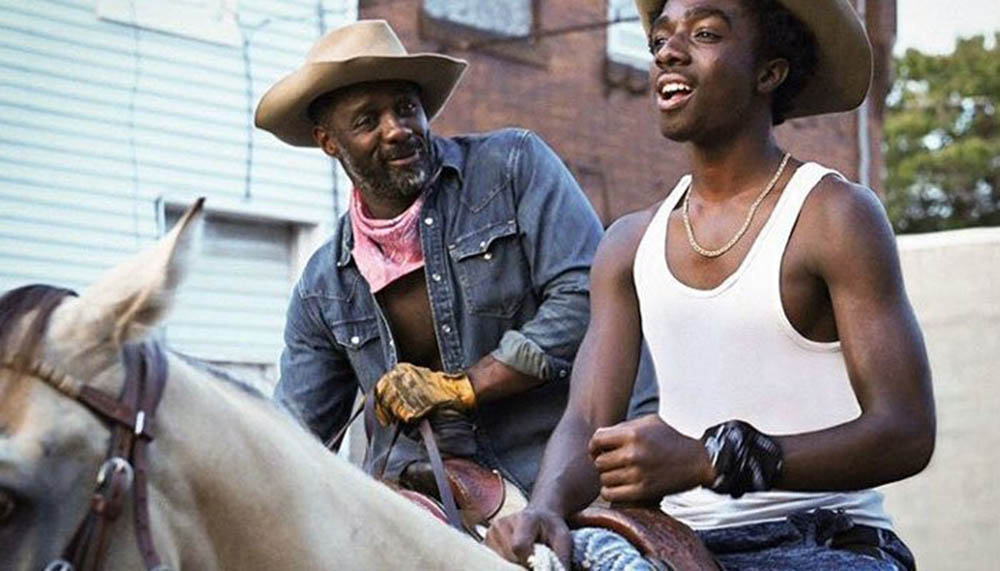 Idris Elba as 'Harp' and Caleb McLaughlin as 'Cole'. 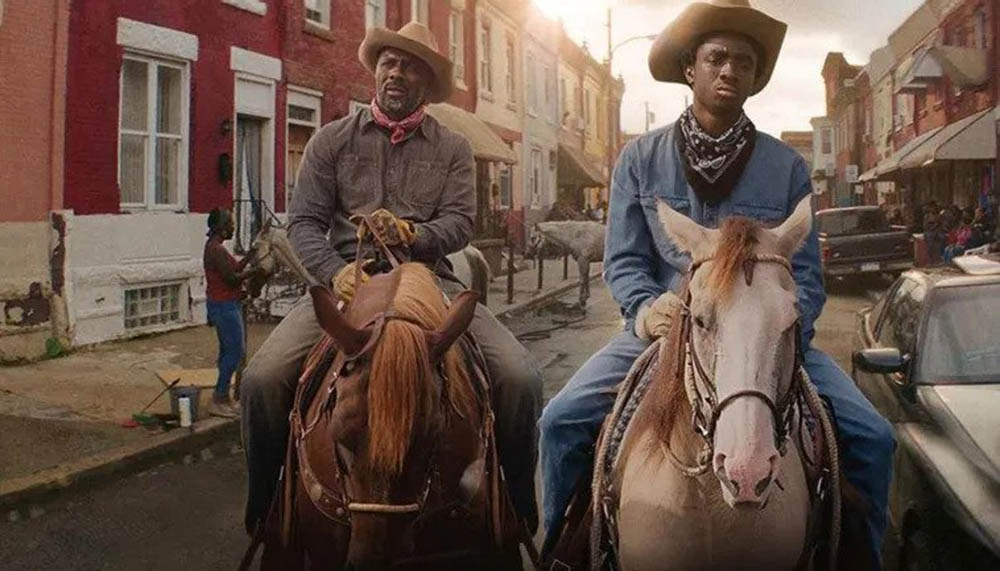 A still from the Netflix film.

Rear of the Year is a light-hearted award for celebrities considered to have notable posteriors. In 2017 it was awarded to British actor Idris Elba. A couple of years later he was to give that “toned and firm gluteus maximus” a bit of a bashing when he undertook many gruelling weeks of riding in preparation for the lead role of Harp in Concrete Cowboy (2020, Netflix), based on Philadelphia’s Fletcher Street Urban Riding Club.

Coupled with his inability to ride was an allergy to horses, which meant he had to wear gloves and long-sleeved shirts when near them, otherwise he would suffer sneezing fits and a runny nose. “I had to put aside my own discomfort,” says Elba, who not only had to portray a skilled horseman but one from North Philadelphia.

“I learnt the lingo of the community and the characteristics of someone from that area. Training with the horses went beyond learning how to ride. You have to understand and bond with them as they quickly realise who are on their backs.”

He did well – his Philly accent is good and he sits well in the saddle. A Time magazine film reviewer stated: “Astride a horse, Elba radiates a citified elegance, like the stranger who rides into town and instantly captivates every local”.

Premiering last year at the Toronto International Film Festival, this cowboy movie is very different to a Hollywood western. It follows 15-year-old Cole, Caleb McLaughlin, who’s sent to live with Harp, his estranged father. (McLaughlin is also sensitive to horses and had to take daily doses of allergy medication!). Harp is a member of a riders’ collective, which has built stables in a warehouse, grazing their horses on a vacant grass lot among the city’s terraced houses and apartment buildings.

While Concrete Cowboy itself is fiction – it’s based on Greg Neri’s novel Ghetto Cowboy – the film is heavily inspired by a community of African American riders in North Philadelphia, an area traditionally home to very poor families. Ricky Staub, the film’s writer/director, spent two years visiting the stables getting to know the people, some of whom he cast in the picture. These non-actors perform very well, better than many of the professionals, in fact, and the end credits are dedicated to them telling their stories and how important the Fletcher Street community and culture is to them.

Jamil “Mil” Prattis, 29, portrays a paraplegic named Paris who shares an emotional scene with Cole about his dead brother. Prattis isn’t paralysed in real life but his story about how his brother died is true. “If it weren’t for the stables I’d probably be locked up. I was a bad boy,” he admits. “Fletcher Street turned me around.”

Several years before Concrete Cowboy, he had been the subject of a 25-minute documentary. Mil’s Life showed how horses, especially one-eyed Dusty, had a major effect on changing the course of his life. “I wanted to convey how Mil’s close relationship with Dusty created an oasis of hope in the landscape of North Philadelphia,” said director, Zach Hauptman, when the documentary was screened at the 2014 Equus Film Festival in New York City.

Erin Brown was another non-actor working as an extra and stunt double alongside Idris Elba. Her father, who repaired trailers for local horsemen, had taken her to visit the stables when she was six. “It became a lifelong obsession,” says Erin, now 36, who learnt to ride on a stallion named Dollar. “Many people believe stallions are wild and dangerous but from Dollar I learned how to ride safely and be alert.” 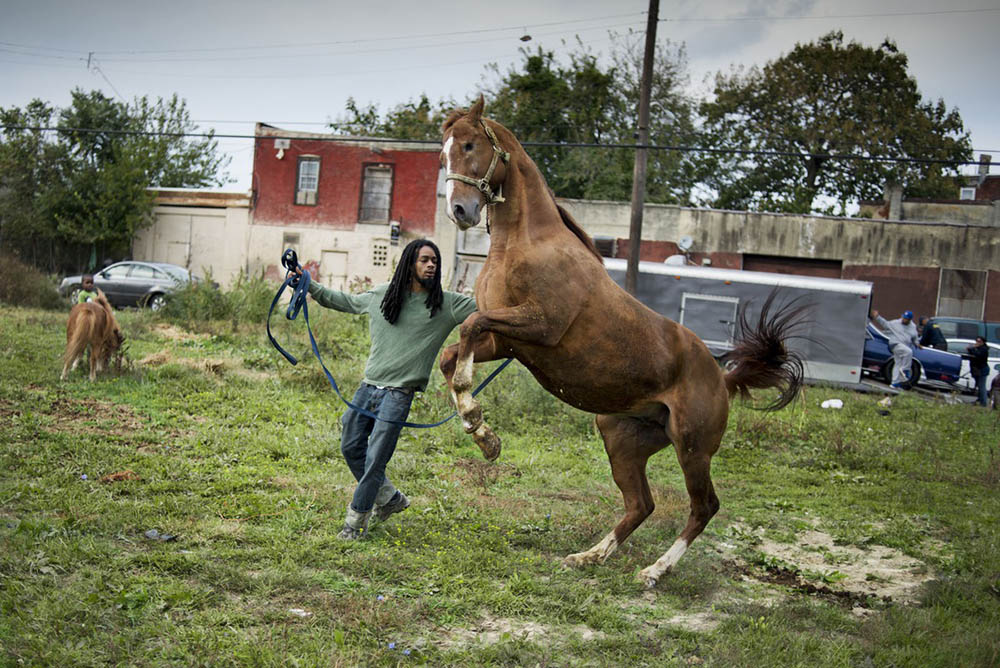 “One of the LTD horses had to
be stabled inside a small house.” 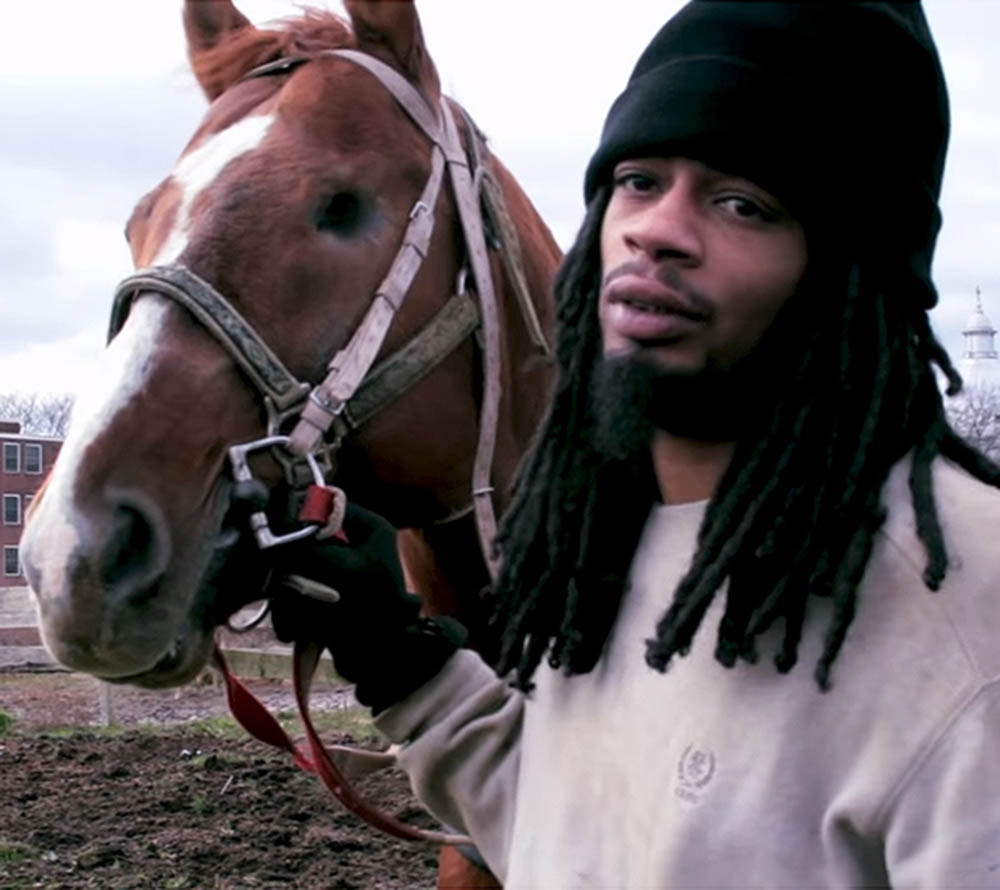 Over the past 30 years she went from the youngest rider in Fletcher Street to a club leader teaching over 40 kids to ride. “It’s an outlet for them, a confidence booster and it tells them they can do something different in life.”

The Fletcher Street Club was threatened recently because the area was purchased by a real estate developer. Erin, with many others, including the team behind the Netflix film, is working with the city to raise US$2 million to build a new facility downtown to be named the Philadelphia Urban Riding Academy.

“We have a site picked out which is absolutely amazing – on one side is a residential neighbourhood and the other is a park with nature trails,” says Erin. “The academy will include stables, provide riding lessons, offer after-school tutoring, programming for veterans, as well as pet therapy. We regularly take one of our miniature horses over to the hospital to be with patients. We enjoy making other people happy.”

No film about horses would be complete without the input of wranglers and trainers. Concrete Cowboy employed the skills of LTD Animals headed by Ryan Peterson and Christine Pitcairn who supplied 11 movie horses – their buckskin Patrick did a lot of “breaking-in” sequences.

Ryan is the son of Rex Peterson (Black Stallion, The Horse Whisperer, Hidalgo, Secretariat, etc.) and fiancé, Christine Pitcairn, was formerly an eventing rider. She trained and worked alongside Olympian Bruce Davidson, and then later began work in the film business with Rex, and trained Topthorn, from War Horse, to be an amateur’s eventer.

One of the LTD horses had to be stabled inside a small house, which it was happy to do. Getting the house prepared was a bit trickier. The production department made engineering drawings, poured new footings in the basement and rebuilt the structure of the house to hold not only a large animal but actors, miscellaneous equipment, a cinematographer and the director. 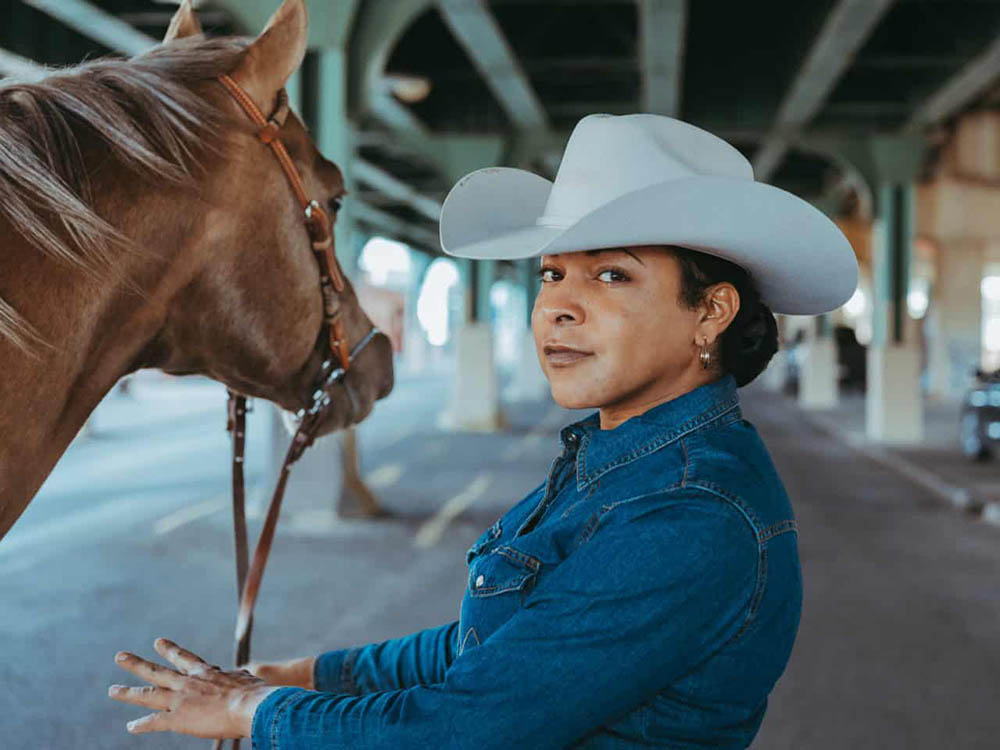 Erin Brown was a non-actor who worked on the film as an extra and stunt double. 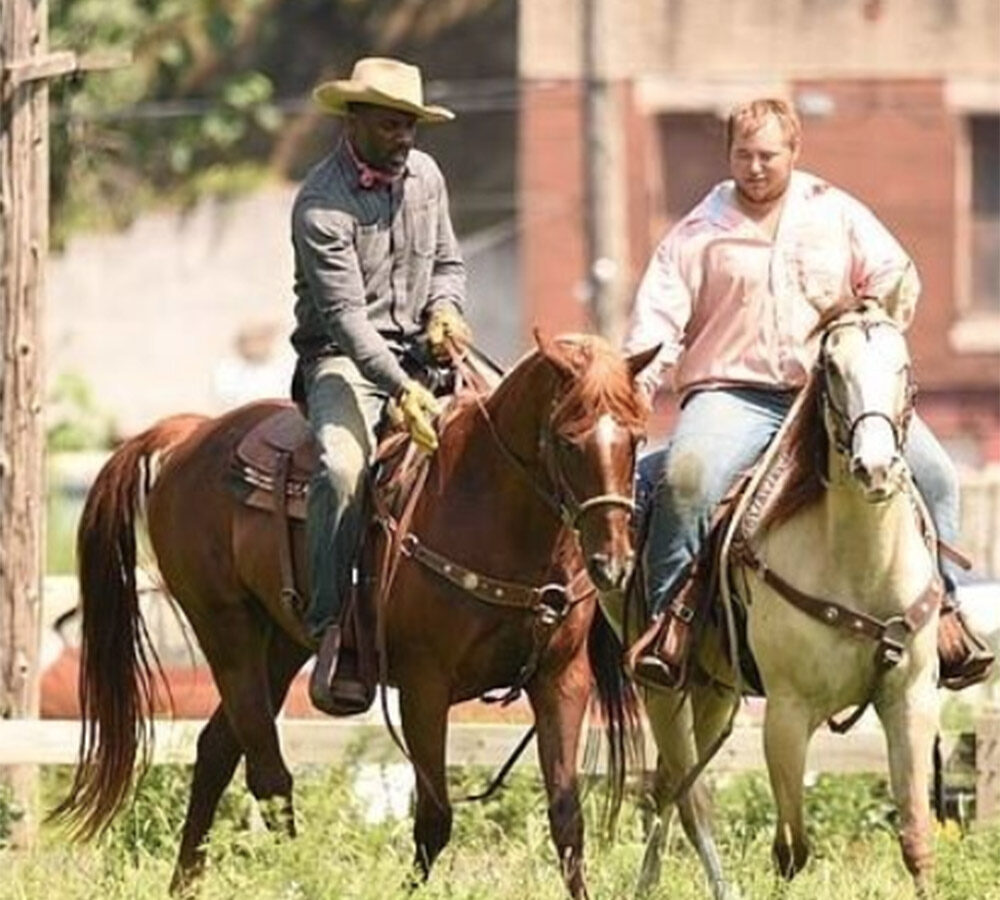 The actors had lessons with Ryan Peterson of LTD Animals. 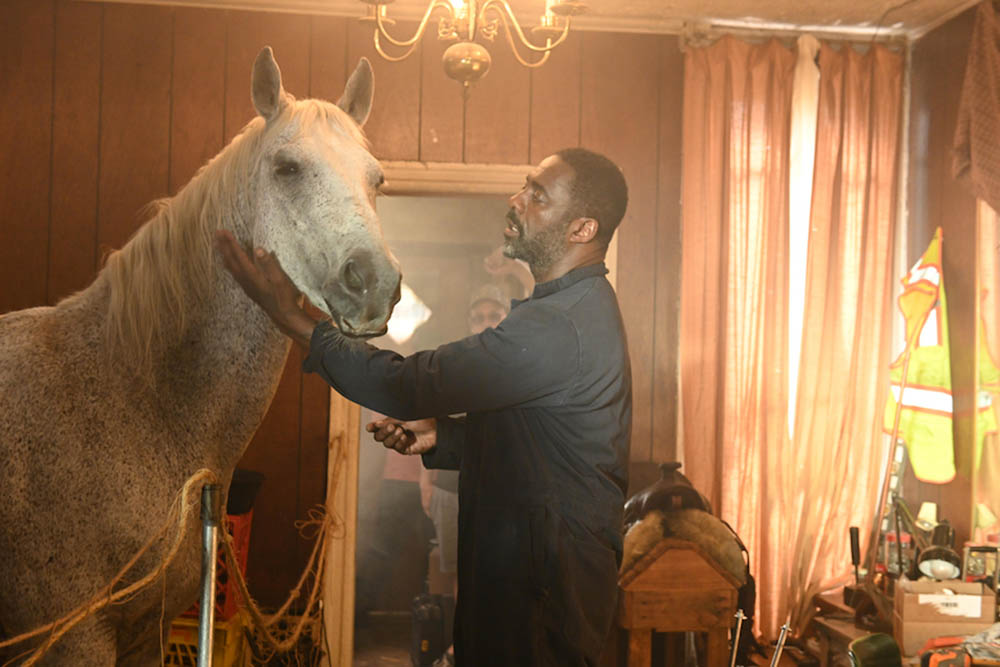 In the movie, one of the LTD horses (named Chuck) was stabled in a small house. 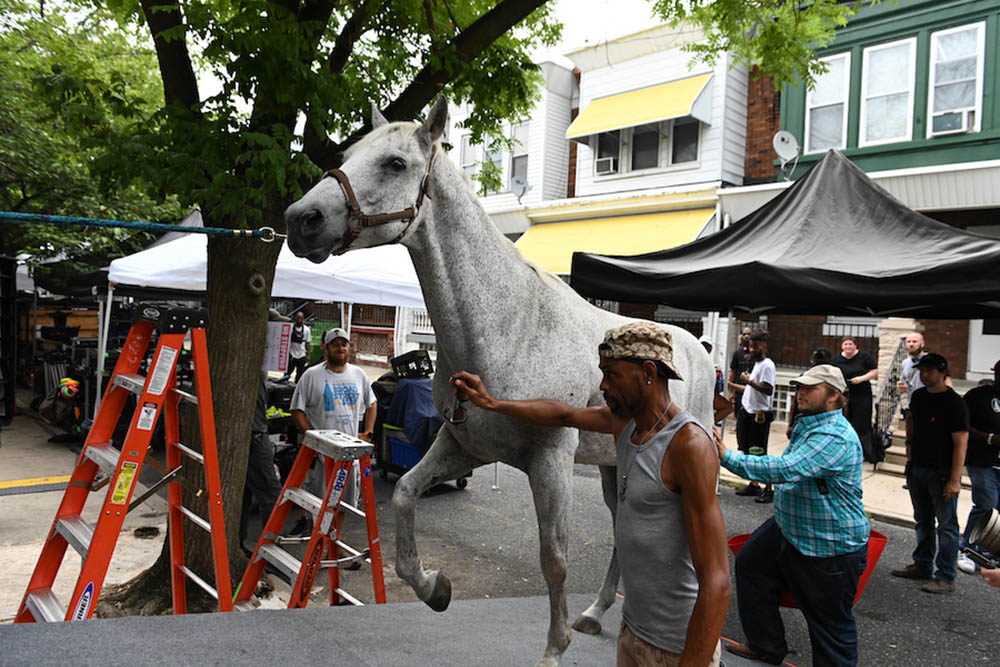 To enter the house, Chuck was led along a specially constructed ramp.

The horse, Chuck, was led along a specially constructed ramp, built at the right grade, which went up to the stoop and into the house, and the horse fitted comfortably through the door. He behaved perfectly throughout the shoot and then returned to his headquarters in Hartford, Connecticut.

This film is a little predictable, there’s a tendency for some of the characters to recite overlong monologues and there are the inevitable misplaced snorts and whinnies inserted by ignorant editors. Yet it’s a worthy piece that should appeal to a wide audience. 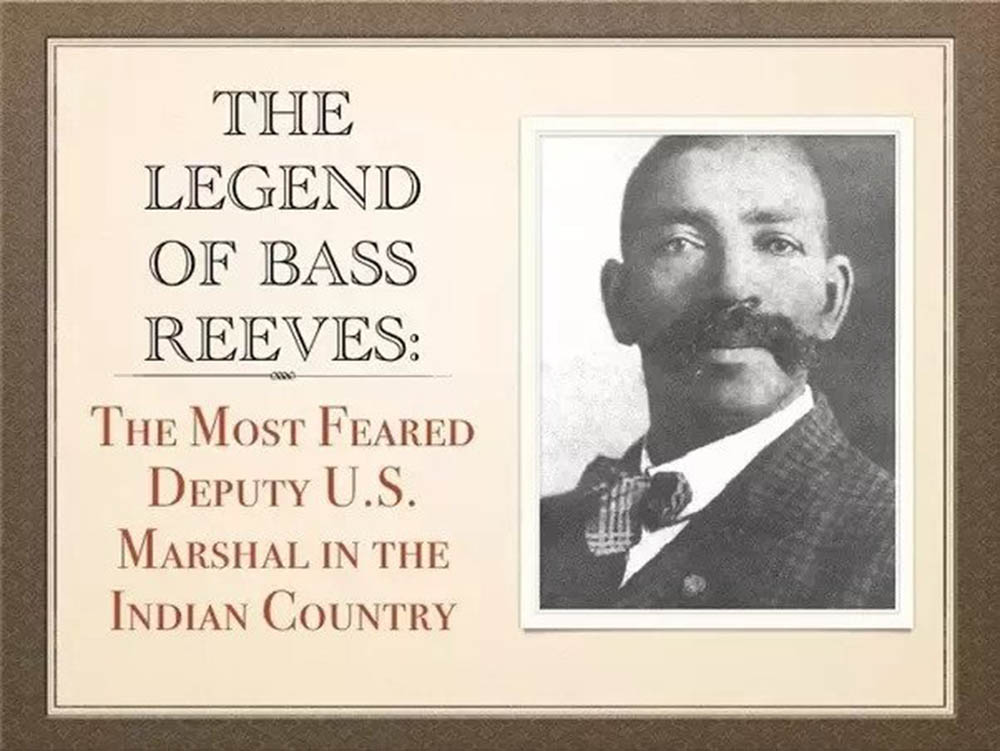 It also makes an interesting historical statement when one character exaggeratingly declares that half of all cowboys were black. Actually, it was about a third, according to the Black American West Museum, a little-known statistic that is almost entirely unrepresented in movies and television. In fact, the career of a freed slave, African American Deputy Marshall, Bass Reeves, is thought to have inspired the Lone Ranger character, played on fifties TV by Clayton Moore, who was as white as his horse. (Silver was a TB/Quarter Horse, by the way).