When Welsh barmaid Jan Vokes decided to breed a racehorse, her only experience had been with whippets and pigeons. Her foal would not only be a winner, but the subject of a documentary and now a feature film starring Toni Collette. 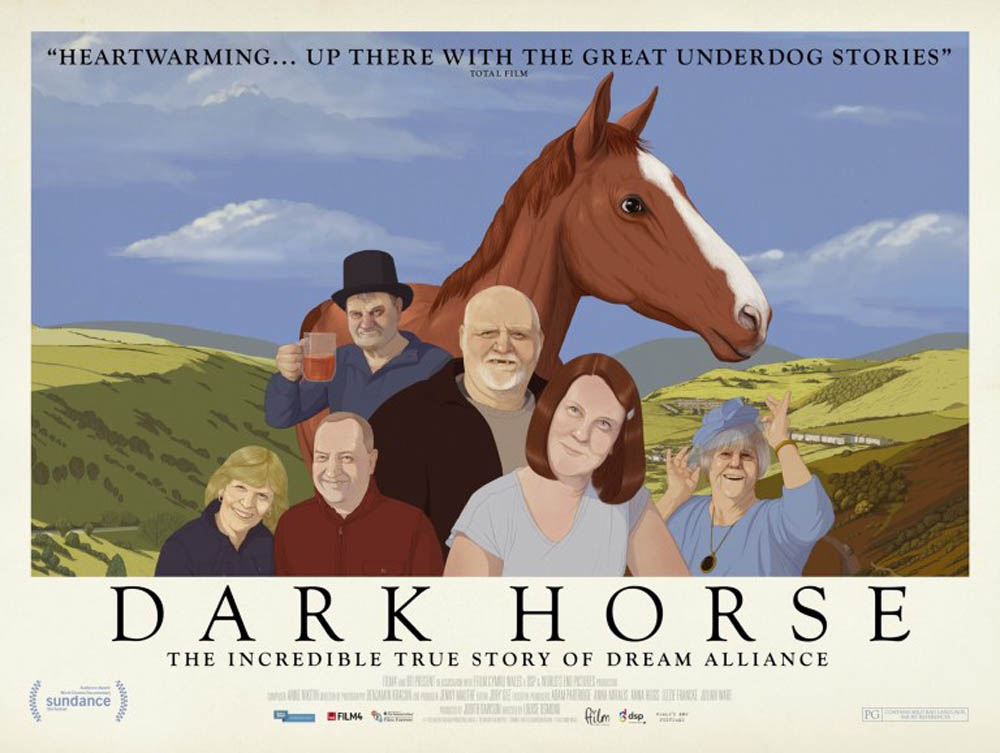 Before 'Dream Horse' began filming in Wales, the real story had been told in a documentary that screened at the Sundance Film Festival in 2015.
Perform with Cool Vitality. Click here to find out how.

Before this feel-good feature began filming in Wales, the real story had been told in a documentary that screened at the Sundance Film Festival. It was the amazing tale of Janet Vokes, who organised a community syndicate in their depressed mining village to finance a thoroughbred foal. Titled Dark Horse: The Incredible story of Dream Alliance, it won the festival’s World Cinema Documentary category for 2015.

Jan and husband Brian had bought an injured mare, Rewbell, for a bargain £350 and bred her to a retired American thoroughbred racehorse for a fee of £3000. Their chestnut foal was born on an old slagheap in South Wales in 2001. They named him Dream Alliance and he ended up winning the Welsh Grand National.

Dream Horse is directed by Welshman Euros Lyn, who previously had worked on a raft of British TV series such as Dr Who and Last Tango in Halifax. Toni Collette was his first choice to play Jan Vokes, and the 48-year-old Australian actor fell in love with the story as soon as she read the script. She also fell in love with the lead horse playing Dream.

“My acting partner was Bo, and he was incredible,” she says. “It was really quite a profound connection because he just was able to be present and listen. And it wasn’t just in my mind; the entire crew was like, “Whoa, this is amazing!”, because we were really, really communicating and connecting. I’ve never worked with a horse in this way and I feel really grateful that I had an experience like this.

“I love horses and have had some experience with them, but this was quite emotionally intimate. My character has such love for Dream. He becomes such a symbol of hope not only for her, but for the entire community and ultimately for Wales, so I’ve got to say it was pretty special. I actually looked into shipping him back here. It was very sad having to leave him at the end of filming.” 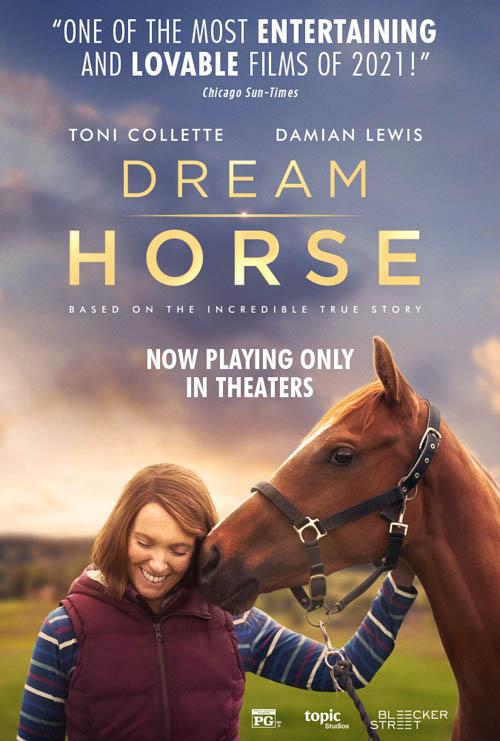 The movie poster for 'Dream Horse'.

In total there were seven horses playing Dreams on the production. “There were two acting and three racing ‘Dreams’, a colt and a foal,” explains the director. “And special horse make-up was used so they all had the same white blaze and socks.

“We had a fantastic horse master named Tom Cox, from film industry horse suppliers The Devil’s Horsemen, who advised how we might approach the racing from a filming perspective.” Cox has recently finished working on a gazillion-dollar Viking movie starring the ubiquitous Nicole Kidman and a trailer load of other A-listers acting alongside bearded horsemen in tunics. Filming of The Northman took place in Irish locations doubling for Iceland.

For 50 years, The Devil’s Horsemen, based at Wychwood Stud, Buckinghamshire, have been providing horses, carriages, tack, riders and horse masters to international films, television programs and for photoshoots. “They’d just shot a racing sequence for The Crown and we were able to capitalise on what they’d learned from that experience,” says Lyn. “They supplied us with five horses, and Welsh trainers Tim Vaughan and Robbie Llewellyn prepared 20 thoroughbreds and 10 hunters for our racing footage.

“The dogs, ducks and goat we cast were all local creatures from around South Wales. The wolfhound lying on the bed in the film’s opening frame was the least cooperative of all the animals. He was fine so long as he was lying down, but it took a lot of patience on the actor’s part to coax him to move around!”

The logistics of filming the races were supremely challenging. The director explains: “We wanted to place the audience not with the jockey but with the horse. To put them in the middle of that experience and imagine what it would be like to be Dream Alliance running in that race.” 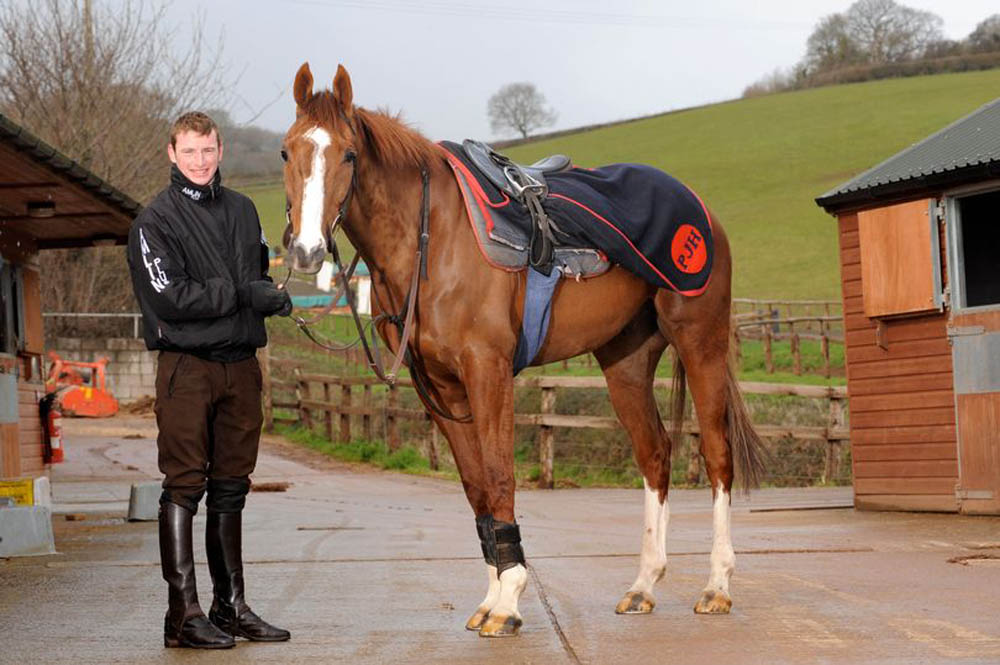 The real Dream Alliance with jockey Tom O'Brien, who rode the horse to victory in the Welsh Grand National. 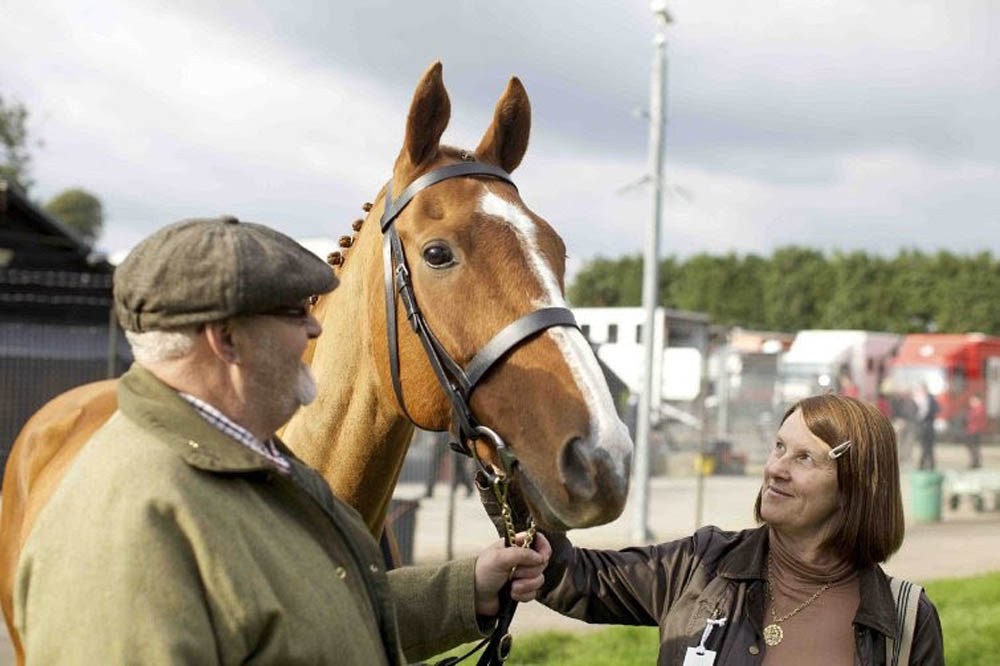 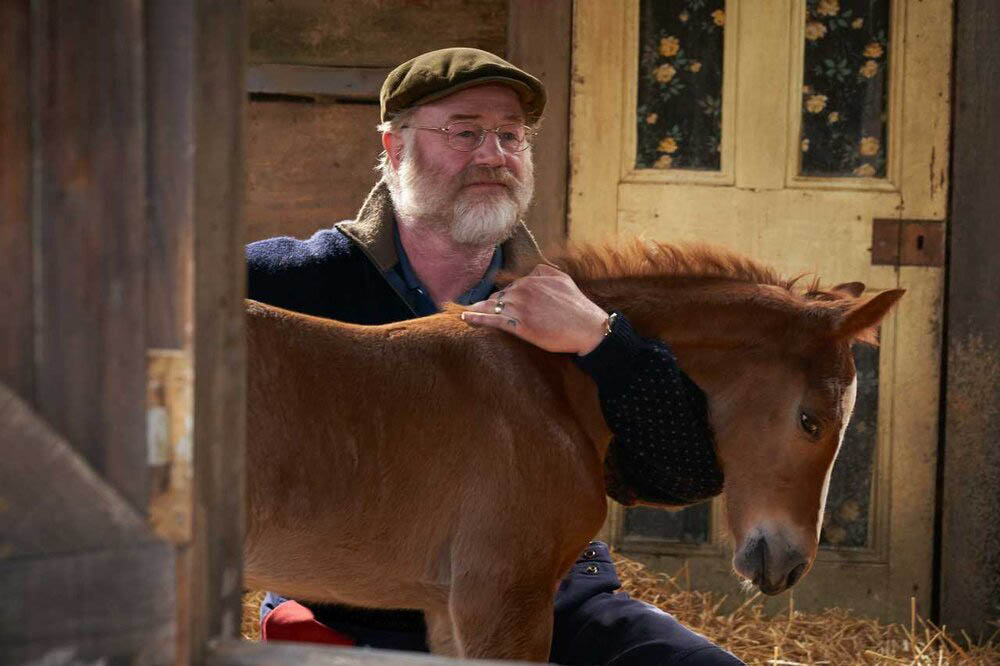 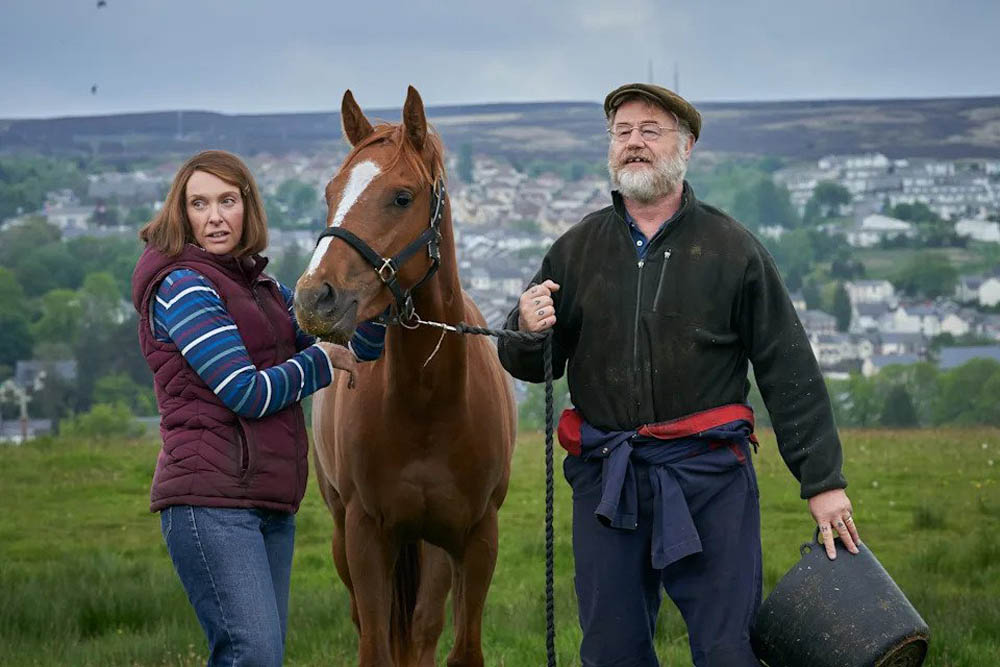 Jan (Toni Collete) and Brian Vokes (Owen Teal) in an early scene of 'Dream Horse' with a young Dream Alliance. 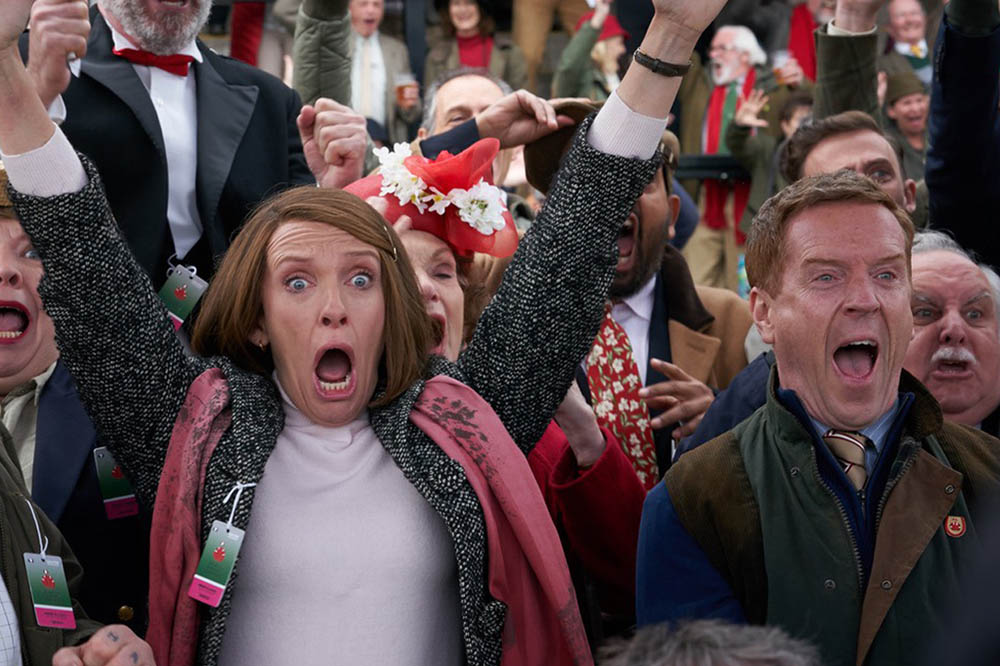 An excited Jan Vokes (Tony Collette) in a still from 'Dream Horse'. 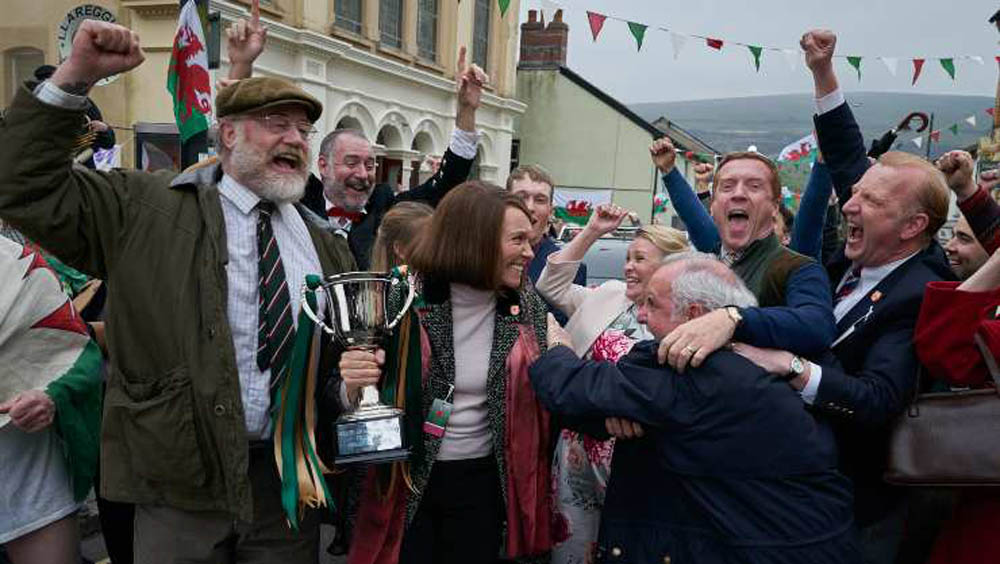 Dream Alliance won the 2009 Welsh National by three-quarters of a length. 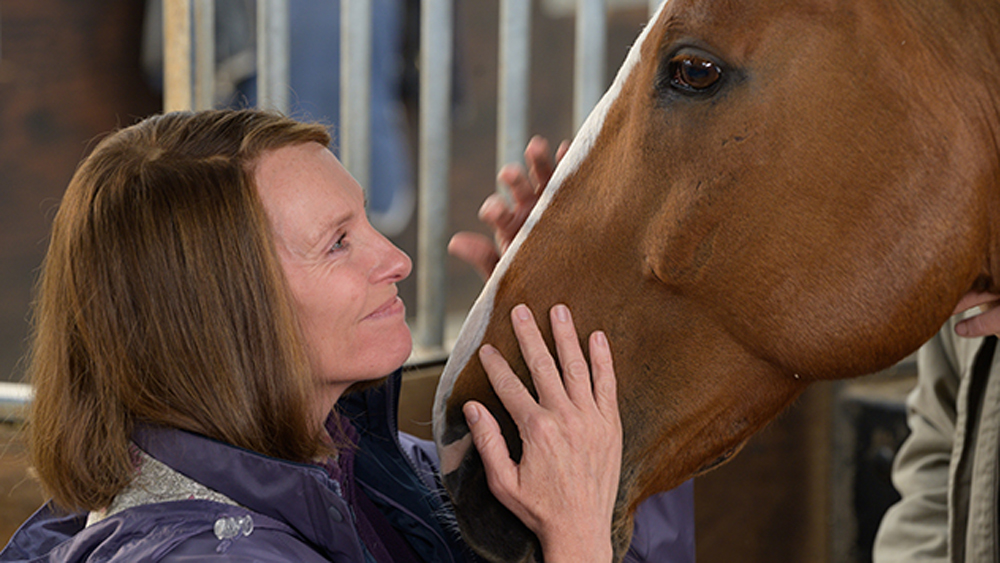 Toni Collette and Bo had a special bond on and off screen during 'Dream Horse'.

These steeplechasing sequences were filmed over six intensive days on three different racetracks. Welfare was paramount. The height of the fences was lowered, the horses given rest days and weather and ground conditions strictly monitored.

“We cast 30 horses to play 10 on screen and we kept them in a rotation so they never got tired; we only ever shot stretches of two furlongs (about 200 metres) at a time. The jockeys had to rehearse each section of the race but not on horseback. They’d line up in formation on foot and we’d do three or four rehearsals before filming.”

Filmgoers might think that the gelding appears surprisingly fresh after finishing his legendary win. Lyn reveals the reason why. “When the horse playing Dream needed to accelerate away from the pack, we did a switcheroo and brought out another chestnut from the stables to be sure that with fresh legs he’d win as per the script.”

In recent months this film has garnered some excellent reviews, even from the most cynical critics. “A well-cast, artfully handled effort that exercises sufficient restraint to really earn its requisite laughter and tears. Likely to have broad appeal,” according to Variety magazine.

“The movie may be a bit schmaltzy but I couldn’t help enjoying it: like Chariots of Fire, only with horses,” said The Guardian. “This true story of a Welsh village that bought a racehorse is a winner.”

Maybe it’s a little too feel good for some, but one thing all viewers can be sure of is that ‘Dream Horse’ is not a film which will give them nightmares.

The real Dream Alliance, meanwhile, is living a happy life after racing. By Bien Bien out of Rewbell, Dream Alliance was born on 23 March 2001. Ridden by Tom O’Brien, he won the 2009 Welsh National by three-quarters of a length. He also competed in the 2010 Grand National but was pulled up after the seventh fence. He was diagnosed with a lung condition. He ran in seven more races but didn’t place.

Overall, he won £138,646 in prize money. After all training and veterinary expenses were paid, including his surgery costs, the 23 syndicate members each obtained a profit of £1,430.

Dream retired in 2012 and lives in Somerset after being adopted by his stable girl. It was a formal adoption process overseen by the British Horseracing Authority, which provided the opportunity for him to be free from racing and enjoy a life with other horses. The syndicate allowed his adoption as the facilities offered were way ahead of anything its members could provide locally.

In the next edition of Equestrian Life’s Horses & Movies series: The Black Stallion (1979). EQ