Quarter horses and unusual French Camargue swimming ponies were needed to act as doubles for the lead equine in ‘The Black Stallion’, but the Arabian stallion Cass-Olé made sure he stole the show with his star quality. 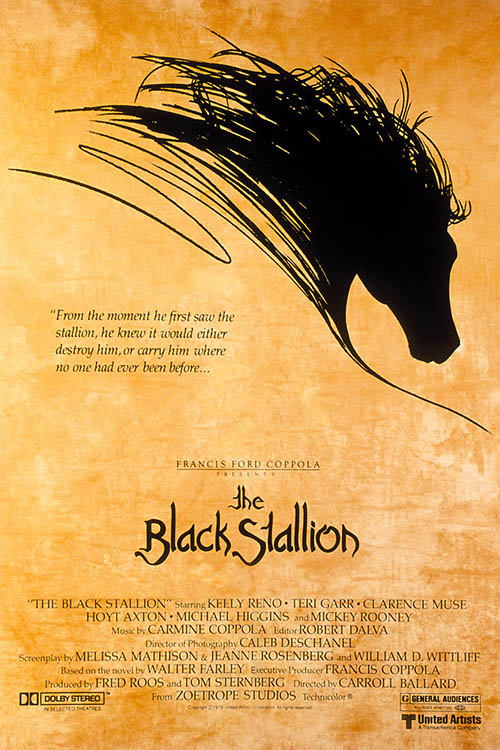 'The Black Stallion' is a 1979 film based on Walter Farley's 1941 novel.
Click here to discover what makes ELD arenas the obvious and best choice

Based on Walter Farley’s 1941 novel, The Black Stallion depicts the story of two shipwreck survivors, an American boy (Alec Ramsey) and the Arabian stallion (‘The Black’), who saves his life. It was produced in 1979 by American Zoetrope and directed by Carroll Ballard, and made $40 million at the box office.

Leading film critic Pauline Kael said it was “maybe the greatest children’s movie ever made”. It appealed to adults as well as to young audiences and was selected for the US National Film Registry by the Library of Congress as being “culturally, historically or aesthetically” significant.

It was the scenes involving water that he found the most challenging. The shipwreck took three weeks to shoot in a mammoth tank at Rome’s Cinecitta Studios. “There was wind, rain, fire and smoke and it was all filmed at night,” recalls Reno. “I spent a lot of time in the tank, not being able to touch the bottom, while they made waves that came far over my head and a realistic-looking ship was being burned in the background – it was all very harrowing.”

SHIPWRECK TRIVIA: An old growling toilet at the editing location was recorded to create the sounds of the sinking ship!

These days few people remember the actor Kelly Reno, but many can recall the name of ‘The Black’, the 10-year-old Arabian stallion who became a much-loved pin-up for horse lovers around the world. Cass-Olé (by Al-Marah Cassanova out of La Bahia), was a former show horse from San Antonio excelling in Arabian western and English pleasure classes and in side-saddle events. In the mid-1970s he had been named the American Horse Show Association’s Horse of the Year for all breeds. (Surprisingly he was not the producers’ first choice, they had wanted the Egyptian racehorse El Mokhtar for the title role, but his owners wouldn’t negotiate. In 1983 they eventually relented and El Mokhtar was one of three Arabian stallions, including Cass-Olé, representing the hero in The Black Stallion Returns.)

In the 1979 movie, four main horses were used to portray ‘The Black’. As well as Cass-Olé, there was his double, Fae Jur, and two chestnut Quarter Horses, Star and Junior, supplied by the Randall family. These, of course, had to be dyed, as did parts of Cass-Olé who naturally had four white socks and a star. During filming he also wore an artificial mane that was woven into his real hair by Paul LeBlanc, his personal hairdresser, whose other clients included Susan Sarandon and Sharon Stone. 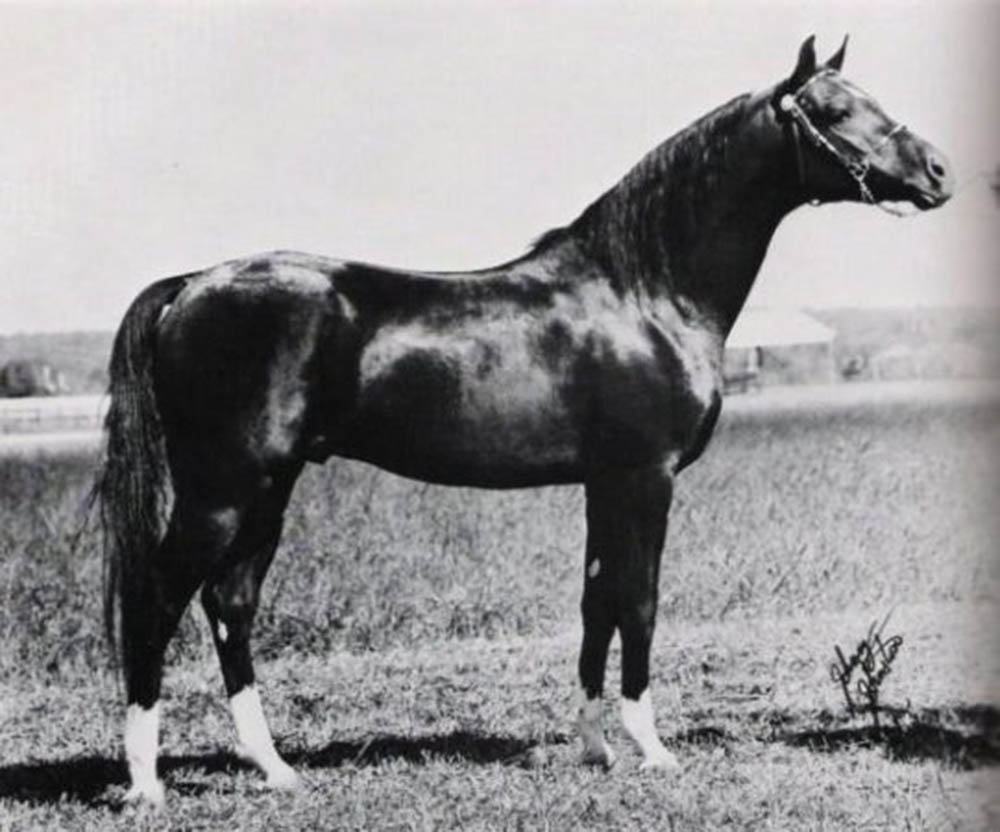 Cass-Olé, pictured without make up, was one of four main horses who played The Black.

“He was so smart and such a character.”

It was the Randalls who were responsible for all aspects of training. During pre-production the four horses worked in California with Glenn H. Randall Sr, a leading name in the movie business who had previously trained such stars as Roy Rogers’ Trigger and Gene Autry’s Champion the Wonder Horse. Randall’s sons, Corky and Glenn junior (‘JR’) undertook on-set training and stunt coordination.

On the Californian farm, the horses were taught to respond to whip and verbal commands, schooled in going towards and away from the trainer, running to one another, turning, walking backwards and laying their heads down. The two stallions had to learn “wild” behaviour such as showing anger by putting their ears back, rearing on command, pawing and stomping. They also had to practise “loving” reactions such as nodding their heads and giving kisses.

Fae Jur had a playful nature, which came in handy during the film’s snake-trampling scene. As the deadly hooded cobra rises over the boy, Cass-Olé comes charging at it from a sand dune – in the next frame it is Fae Jur who is rearing up and stomping a fake cobra. And in one of the movie’s most memorable scenes it is this stallion who cautiously advances, retreats, then finally moves towards the boy who is holding out a handful of seaweed. 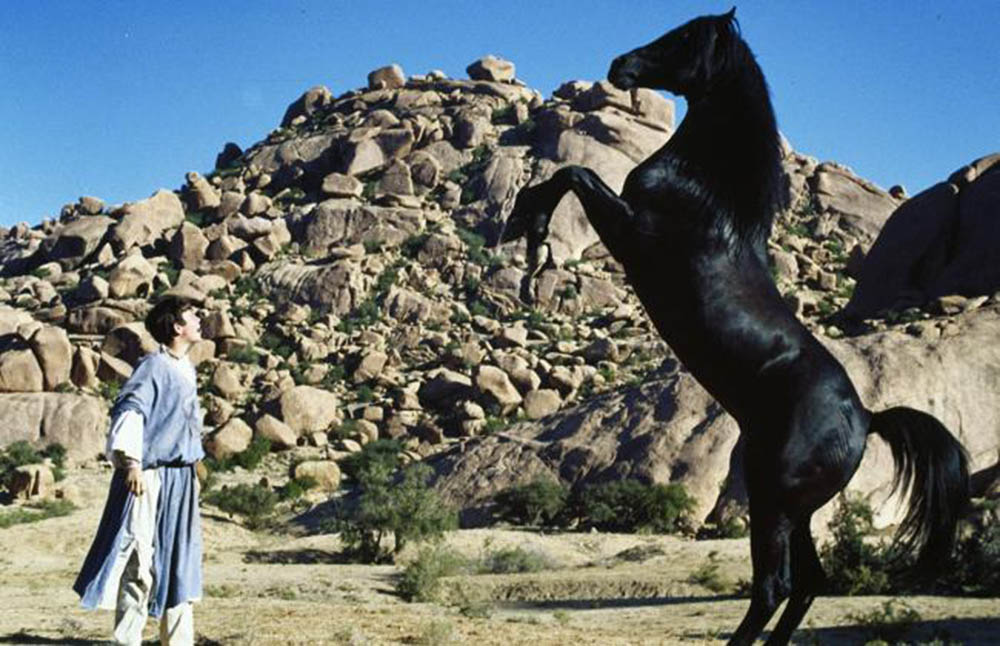 Cass-Olé and Fae Jur both learnt to rear on command as part of their role as The Black. 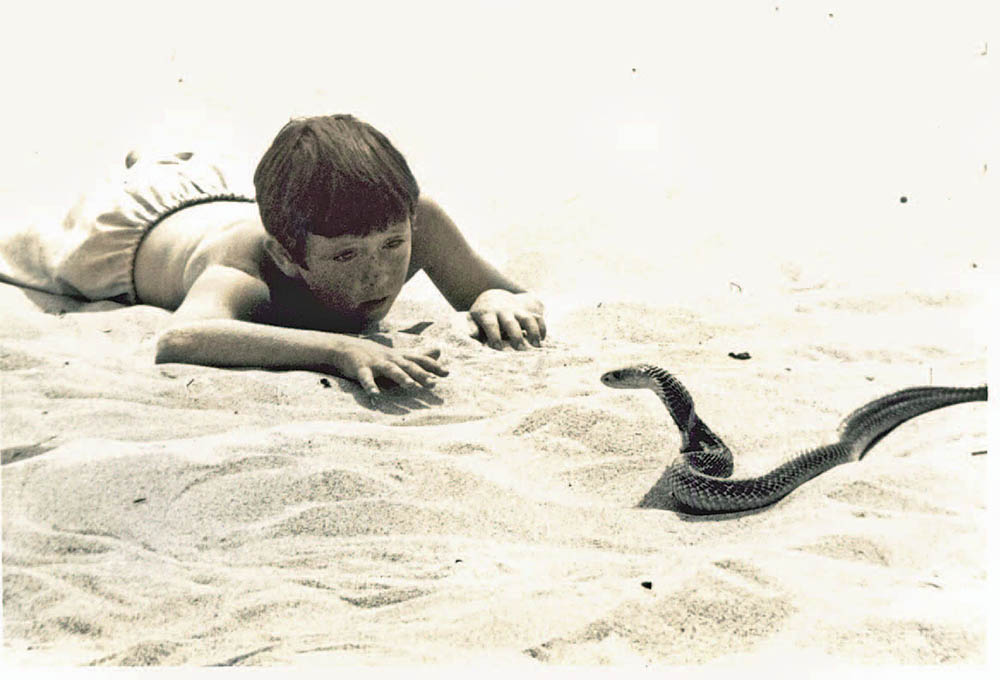 Kelly Reno (Alec) with a real cobra; a glass pane was placed between them! 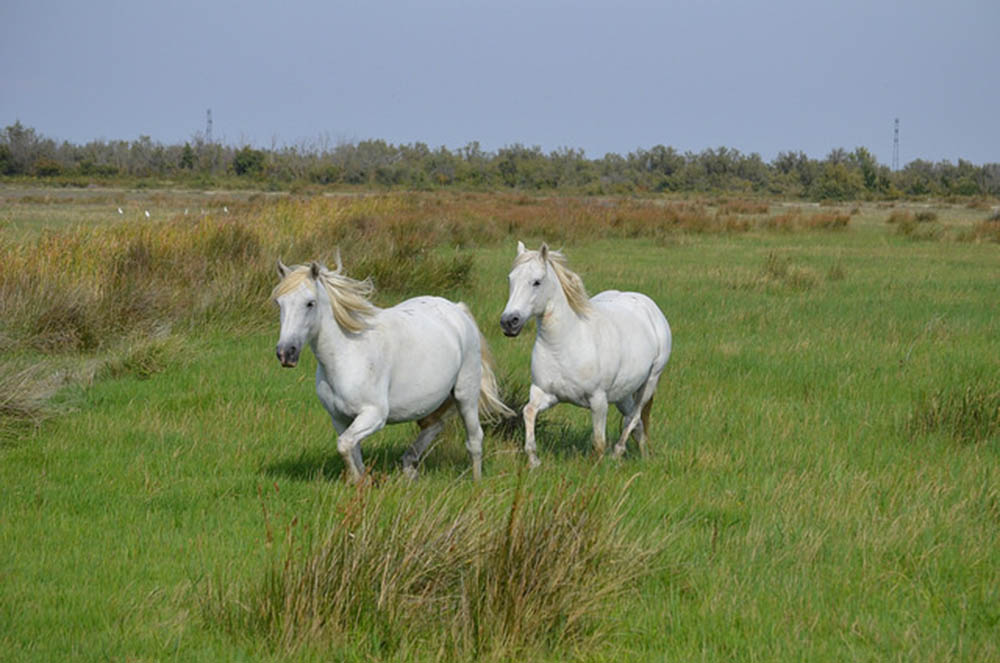 Camargue ponies, ‘Pete’ and ‘Repete’, were used for the extensive swimming scenes.

“His talent was amazing.” 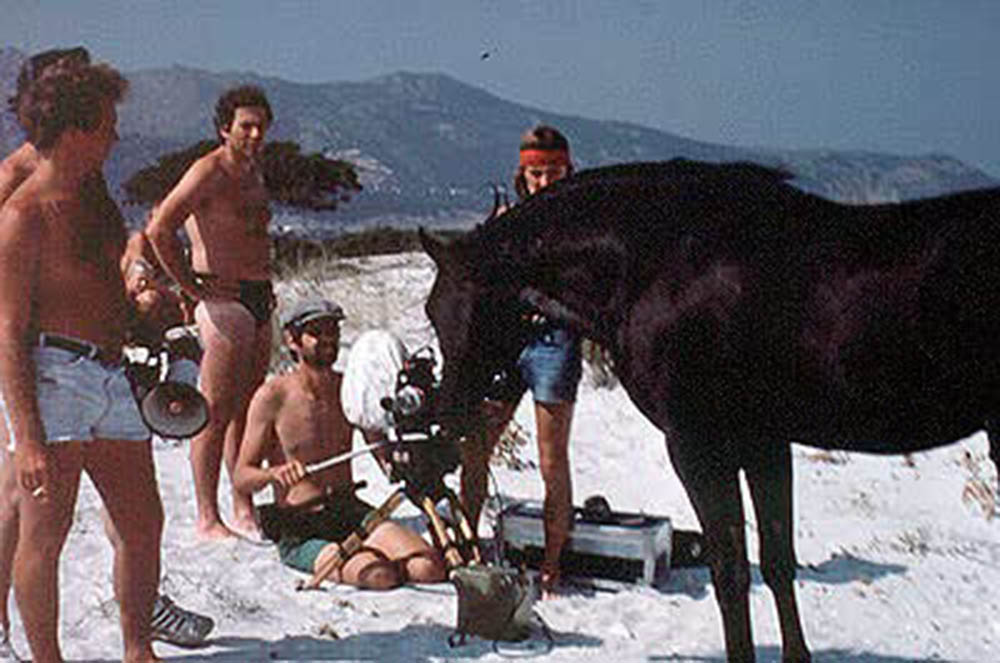 Working on the set of 'The Black Stallion' (1979) with horse trainer Corky Randall.

COBRA TRIVIA: The director believed the cobra had been defanged but was told by the snake wranglers they didn’t do things that way as they took out a hypodermic needle from a little portable fridge. “If the boy gets bitten we inject him with this.” A couple of hours later two grips arrived carrying a gigantic pane of glass which they secured on to the sand – when the camera rolled the boy was on one side, the cobra on the other!

The remote beach was Costa Paradiso in Sardinia and both director Carroll Ballard and DOP Caleb Deschanel were adamant about having the horse swim 180 metres offshore. Trainer ‘JR’ Randall saw this as a problem. “Our horses could only swim a short distance, they weren’t amphibians,” he says, and he suggested that Camargue ponies would be more appropriate. “They come from lagoons in southern France and all they do is swim.”

Enter two greys from the marshy wetlands of the Rhone delta, who became known as ‘Pete’ and ‘Repete’ due to the myriad of takes required for the underwater sequences. They were dyed black and they saved the day. Ballard recalls the astonishing difference between their appearance on land and in water. “These pot-bellied, big-footed ponies transformed into graceful swimmers once in the sea. Their ballet-like leg movements, masterfully combined with lively music, created some beautiful sequences.”

FILM BUFF TRIVIA: The Black Stallion’s music was composed by Carmine Coppola, father of Francis Ford, who was the film’s executive producer.

When filming finally wrapped, Corky Randall declared Cass-Olé his all-time favourite equine actor. “He was so smart and such a character. He loved to be around people and was almost human. Throughout life you run into exceptional animals who like to show off and are so easy to work with – like well-trained actors who just fall in and do their part. But before Cass, I’d never met a horse who wanted to be an actor. His talent was amazing. 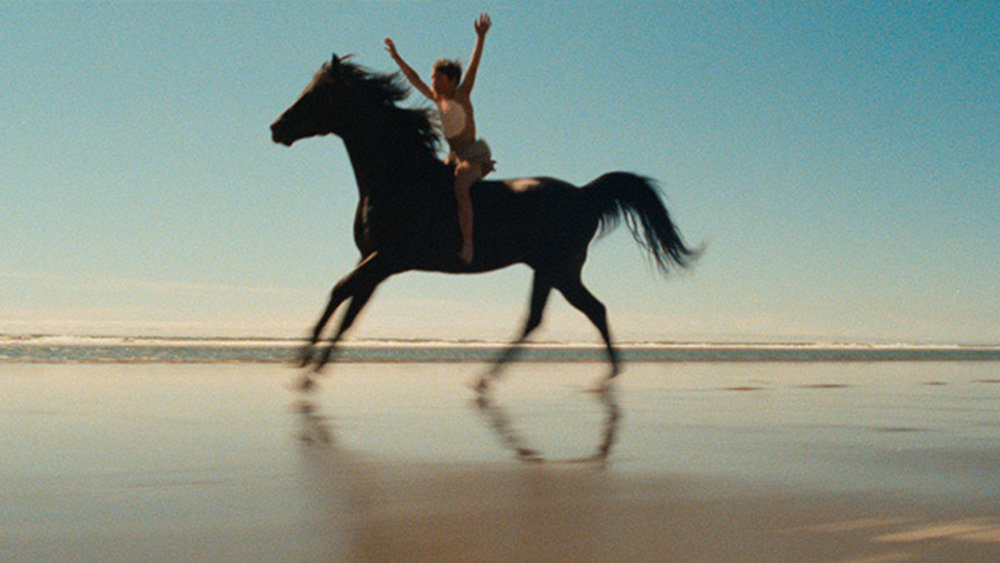 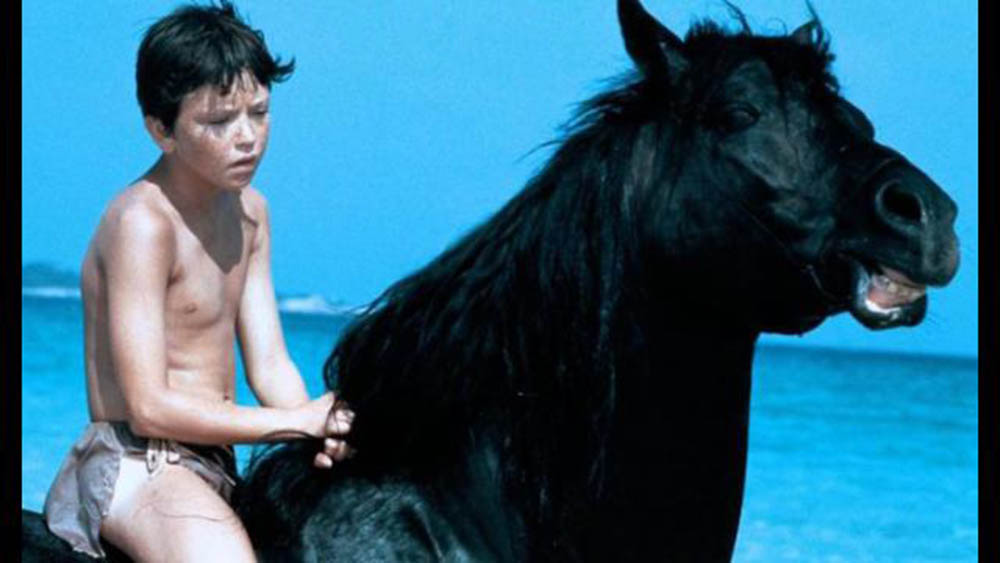 The famous beach scene; Kelly Reno (Alec) did just about all of his own action scenes in the movie. 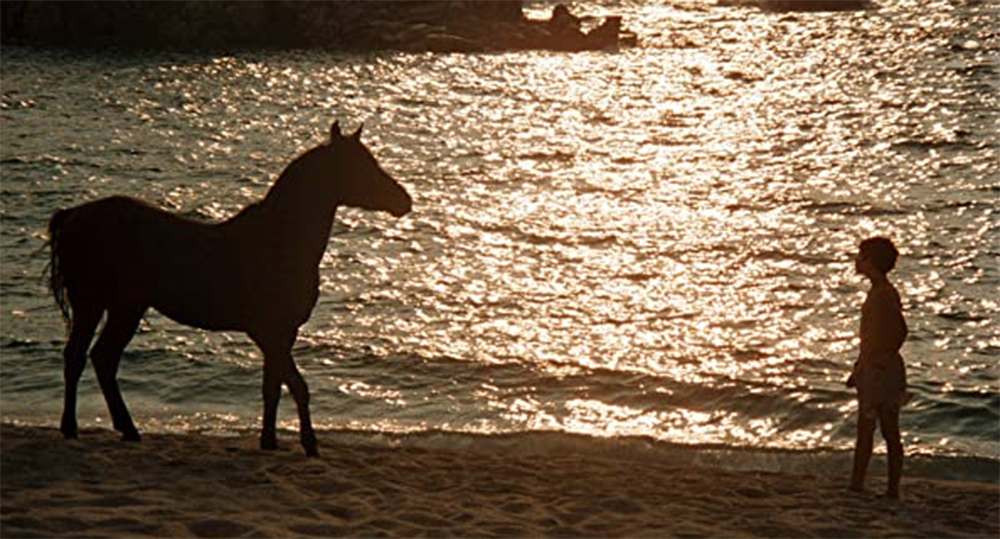 A sunset scene on the beach from the 1979 movie. 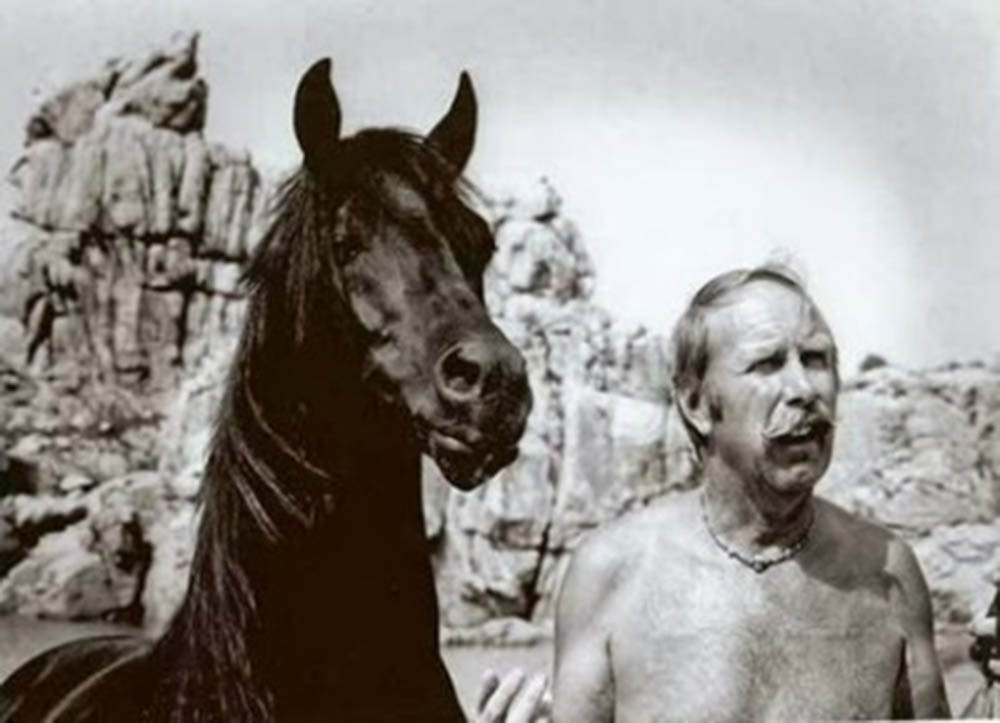 Corky Randall with Cass-Olé, whom he declared his all-time favourite equine actor. 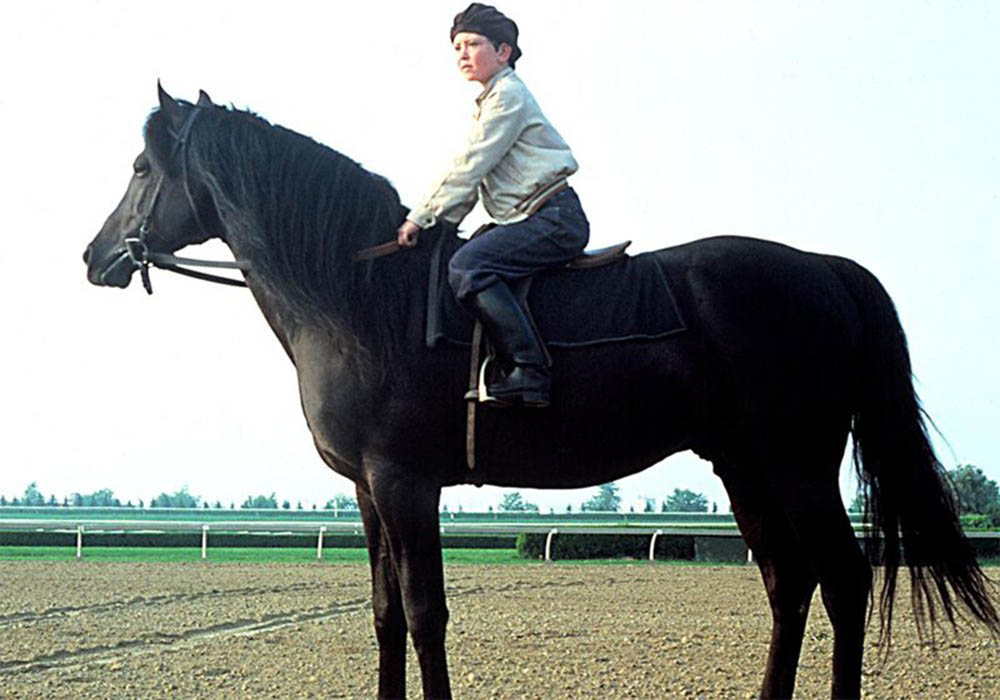 Cass-Olé and Kelly Reno had a good relationship on set. 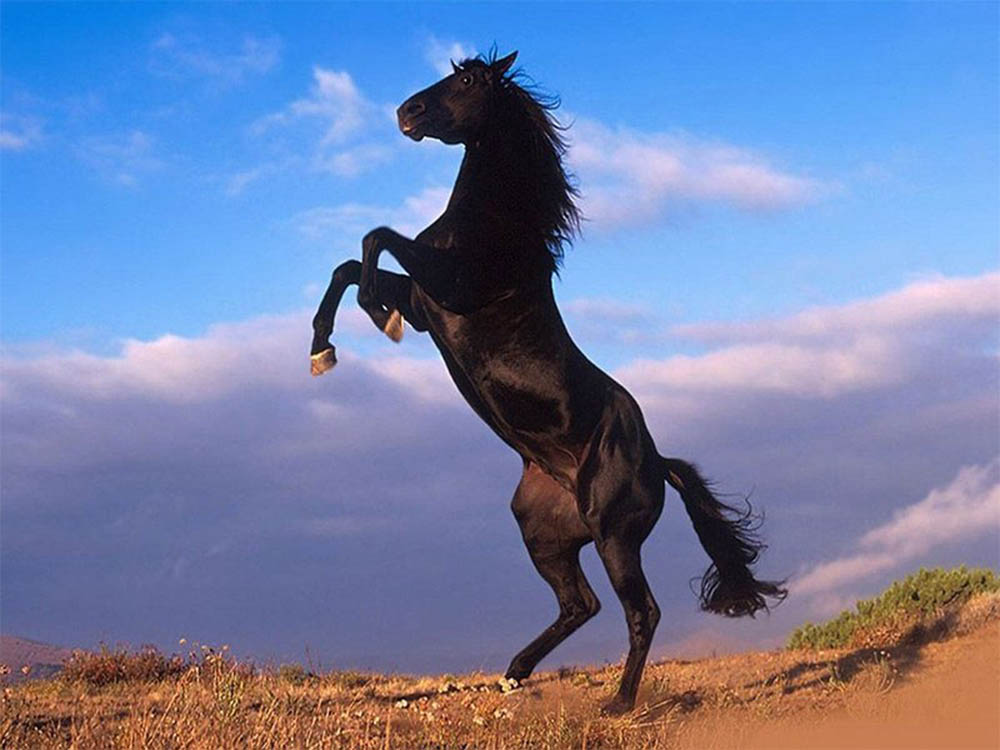 'The Black Stallion' was declared by some as 'maybe the greatest children’s movie ever made'.

“And he and Kelly Reno had a good relationship because they spent so much time together before the movie started. Cass-Olé was like the character of ‘The Black’, very independent, knew he was gorgeous and would take control if you’d let him. On the other hand, he was really gentle with Kelly.”

There are still a lot of successful pictures to be made with horses if you can capture the relationship between the animal and the person, like they did on The Black Stallion.

FOOTNOTE: Kelly Reno made several more movies before retiring from the business after suffering serious injuries in a car accident. He became a truck driver and works in Colorado. Cass-Olé returned to the show ring where he continued to win local and regional titles. He also sired 123 foals. The stallion was euthanised in June 1993 after suffering serious complications from a bout of colic. He was 24.

Next month in Horses and Movies – Racing Stripes. EQ