A battling outsider overcomes diversity to triumph in a race – not the most original of movie plots, but Racing Stripes is different… its hero is a talking zebra. 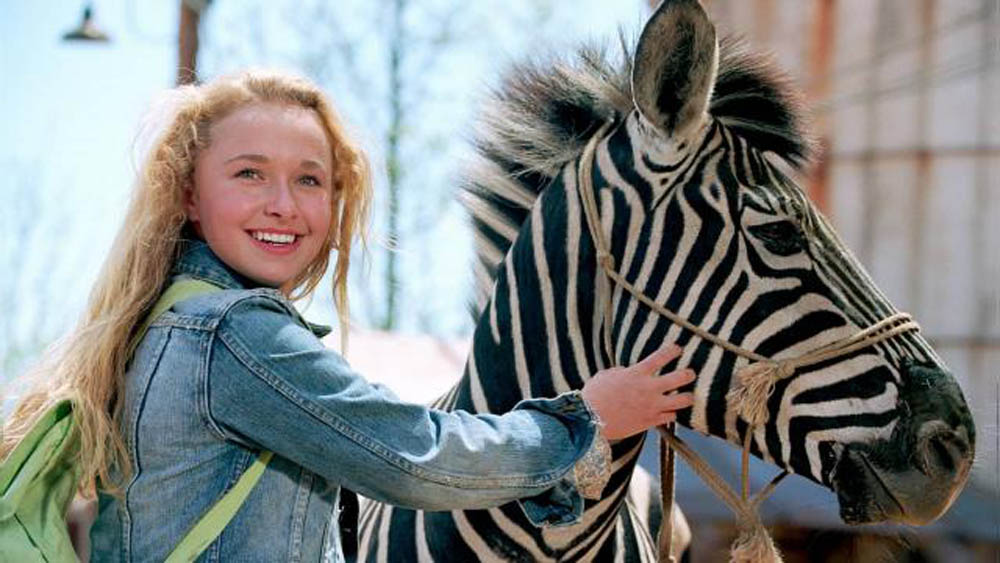 The movie was directed by Frederik Du Chau and starred Hayden Panettiere as lead character Channing.
Click here to learn more about Racing Victoria's Off the Track program and initiatives.

With a budget of $30 million, the producers of Racing Stripes (Warner Bros 2005) cast a handful of on-camera humans working on location in South Africa alongside a variety of animals. These were later voiced in distant recording studios by actors such as Dustin Hoffman, Whoopi Goldberg, Snoop Dog and Frankie Muniz.

Directed by Frederik Du Chau, a young Belgian filmmaker, the complex process of animation and animatronics was undertaken by over 150 people; a team of 40, comprising many Australians, worked with the different creatures.

There were pelican, goat, dog, sheep, and rooster handlers, thoroughbred and pony wranglers, liberty horse and zebra trainers, grooms, stablehands and animal coordinators, all helping bring to life the story of a zebra, accidentally abandoned as a foal by a travelling circus, who longs to be a racehorse. Rescued and taken to a farm belonging to widower Nolan Walsh (Bruce Greenwood), he grows up surrounded by barnyard animals. Named ‘Stripes’, he finds an ally in Nolan’s 14-year-old daughter, Channing (Hayden Panettiere), who longs to be a jockey.

Finding the right girl for the job was a lengthy process. The script required her to confidently ride horses, ponies and a zebra and interact with them naturally. The final decision was made by Heath Harris, Racing Stripes’ liberty horse master who also had the task of teaching the film’s star.

While at home in Australia, he was sent riding footage of three young actors. “The producers didn’t know who to select. Hayden had fallen off in her video, but she’d laughed and got back on. ‘Now that’s a girl I can teach’, I told them.” Hayden got the role, a very different one to when she had played Maddie Harrington in Ally McBeal.

Her first lesson didn’t go so well – in fact it didn’t go at all. “She turned up with the producer and first assistant an hour after the appointed time. She had on a skimpy pair of shorts and was wearing sandals. 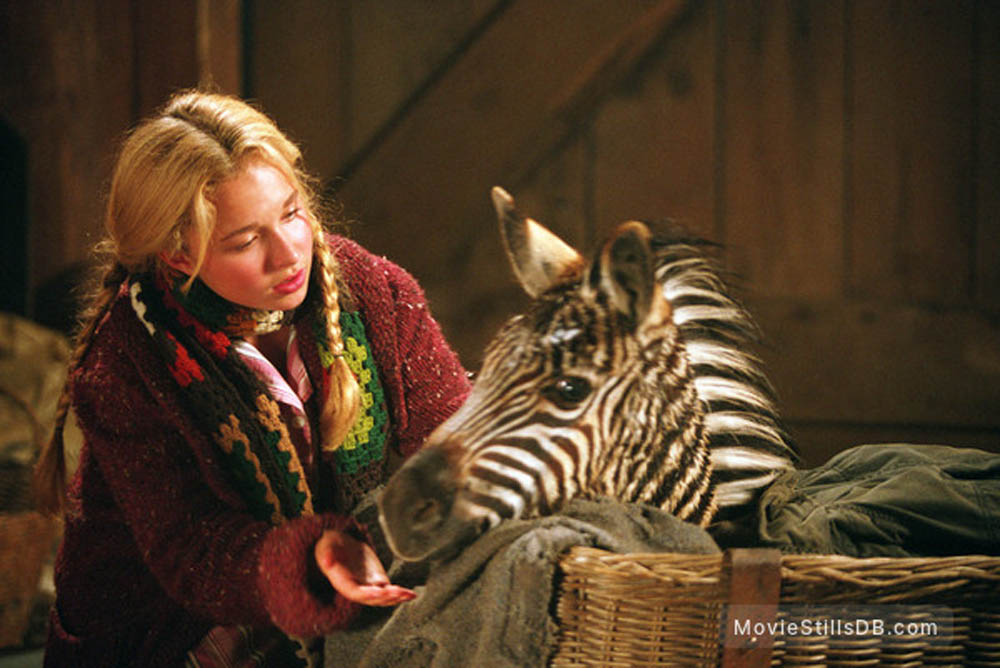 The movie follows the story of 'Stripes', a Zebra who was accidentally abandoned as a foal by a travelling circus and longs to be a racehorse. 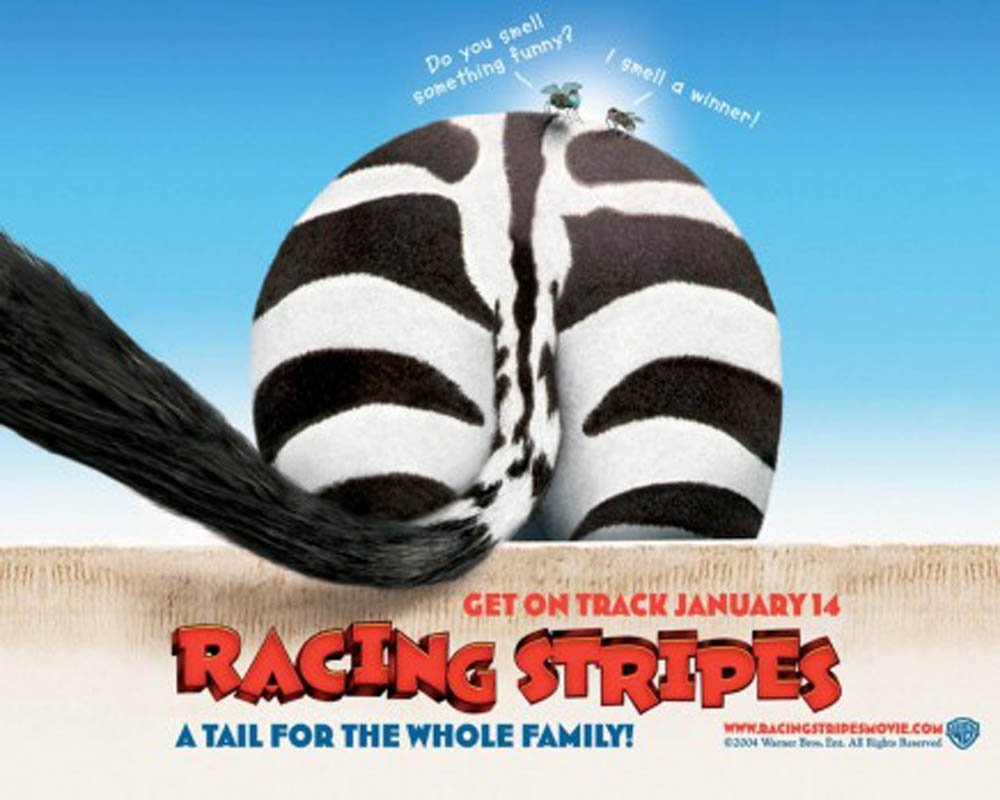 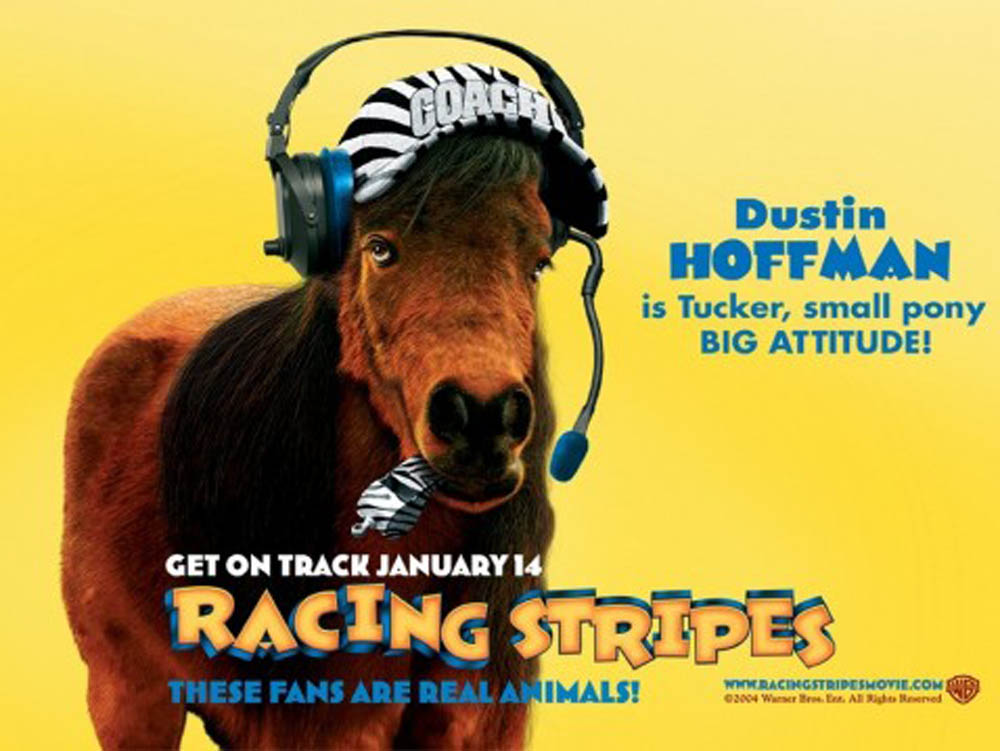 The movie included lots of famous voices, including Dustin Hoffman.

“It’s bred into them to be fierce.”

“‘I can’t give you a lesson, you’re not suitably attired and you’re late,’ I said. From then on she never gave me any lip, showed respect and was quick to learn. At the end of filming she presented me with a silver whisky flask, engraved with a very kind message, which went straight to the poolroom!”

Queensland horsewoman, Laura Bostock, who was the actress’s stunt double, says, “Hayden did a really good job”. Laura worked alongside husband, Ian, who broke in some of the zebras to saddle and trained them to pull carts and a plough. “I’d never ridden a zebra before doing this film. They buck, rear and twist and it’s bred into them to be fierce and quick so as to protect themselves from predators. Ian took his time and really got a lot out of them.”

And these zebras were no spring chickens. The youngest was 10, the oldest close on 25 and a couple had been captured from the wilds of the Kalahari Desert. “I was very proud of them. It’s said they can’t be trained but they did everything they were asked to do,” says Ian, who for many years has been a livestock contractor and rodeo clown, and is often seen at events entertaining audiences on an American bison, another animal traditionally regarded as being unrideable!

“The zebras never took a backward step and, despite being head-shy, learnt to wear bridles, halters and winkers. And they worked under really trying circumstances such as night shoots, doing multiple takes lying down and performing in front of a lot of people. Just occasionally, in some racing scenes, ‘painted’ ponies were used as substitutes.”

Others working with zebras were Australian Craig Bullen, and American Bobby Lovgren, credited as the film’s master animal trainer, who had just finished on Seabiscuit.

All Racing Stripes’ livestock handlers benefitted from the presence of an experienced exotic animal trainer, Steve Martin, the head of Natural Encounters. Based in Florida, his company consists of 50 professionals teaching animal training strategies and creating educational programs for zoos around the world. He provided inspiration, advice and assistance without being intrusive or dictatorial.

“Steve’s worked on scores of major films with many different wild animals, such as bears, cougars and lions,” recalls Ian. “Laura and I visited him in the States, and he came to see us in Queensland. A great person.”

Sarah Rawson-Harris was most impressed with his expertise, as she was with Bobby Lovgren who she was paired with during the production. Sarah went on later to head her own company, Film Animals Australia, in Samaria, Victoria. “Bobby trained the liberty zebra and some liberty horses which were ex-thoroughbreds that didn’t have a lot of education, particularly on the ground. We had to familiarise them with the zebra so they became confident and relaxed. A liberty zebra isn’t as quick or as reactive as a horse and the whole training process is a lot slower. 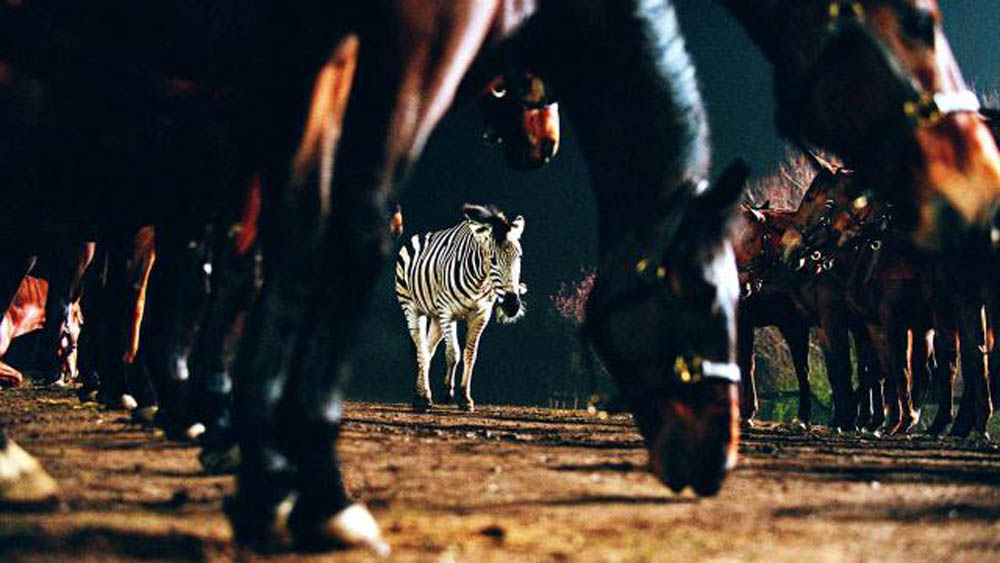 One of the film’s most difficult scenes involved 40 horses and a zebra congregating at night to compete in a race without rules or humans. 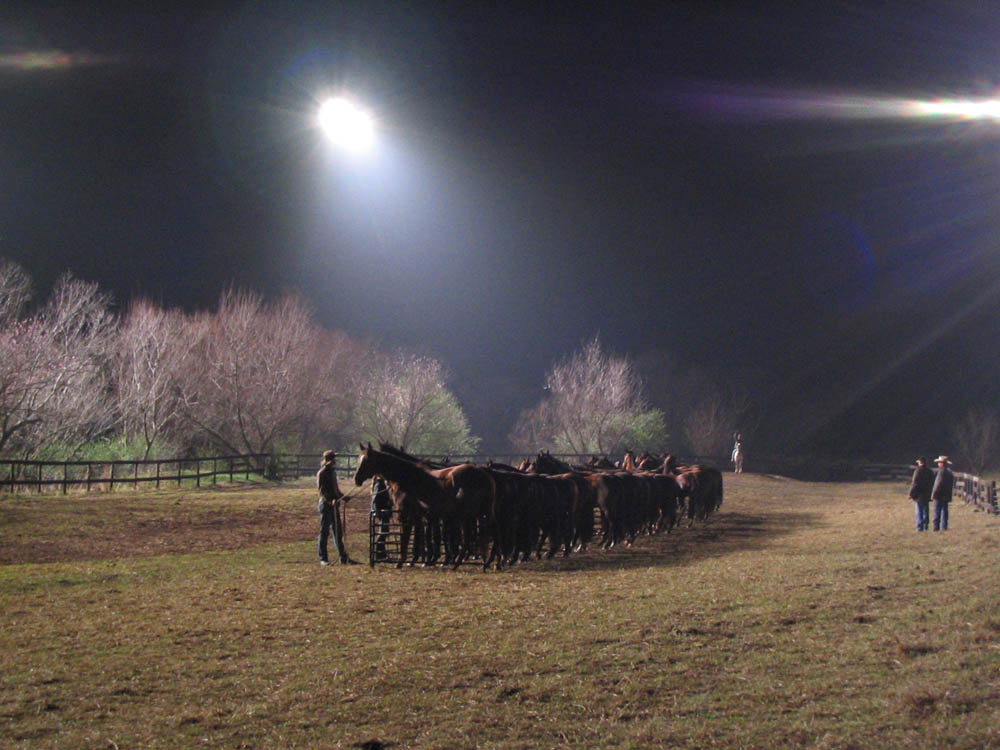 Behind the scenes, preparing for the night shoot. © Krissy Harris

“Sam wanted to be a horse.”

“During filming we worked on two locations – in and around the Drakensberg Ranges, there was a large stud there where the horses were kept, and at a racecourse in Durban. There was always a vet on site and an animal welfare officer. Bobby was a very clever man. I learnt from him everything I know and use today.”

She also admired director Du Chau. “He really understood about working with animals, how they feel and when to call ‘cut’ – makes your job so much easier.”

One of the film’s most difficult scenes involved 40 horses and a zebra congregating at night to compete in a race without rules or humans. The horses had to line up while Stripes walks past them stopping at a given point. “We managed to achieve that action with virtually no computer work,” says Heath. “The interaction of the animals was pretty amazing.”

Having one “tame” zebra on set saved some time but he still required schooling. ‘Sam Quentin’ had been trained by Tim Rivers of Animals in Motion on a farm in Marion County, Oregon. He was broken in to saddle and had performed before a camera. His credits included a role in Ace Ventura: When Nature Calls, some Schweppes commercials and a stills shoot with Steffi Graf.

“Sam wanted to be a horse,” Rivers says. “If you took him out to a pasture with six zebras and two horses, he’d hang out with the horses.” A few months after selling him to the production company he regretted having done so. “I miss him. I’d give back what they paid me for him if he could come back,” cried Rivers, who wouldn’t disclose the selling price.

It would certainly have been much higher than the cost of a bunch of local thoroughbreds. It was Steve Gladstone’s job to train them for the racing scenes and get them fit. “There were plenty of naughty ones,” says Steve, who has been on several major pictures such as Phar Lap and The Young Black Stallion. He presently works as a trainer at Centennial Park Stables in Sydney. 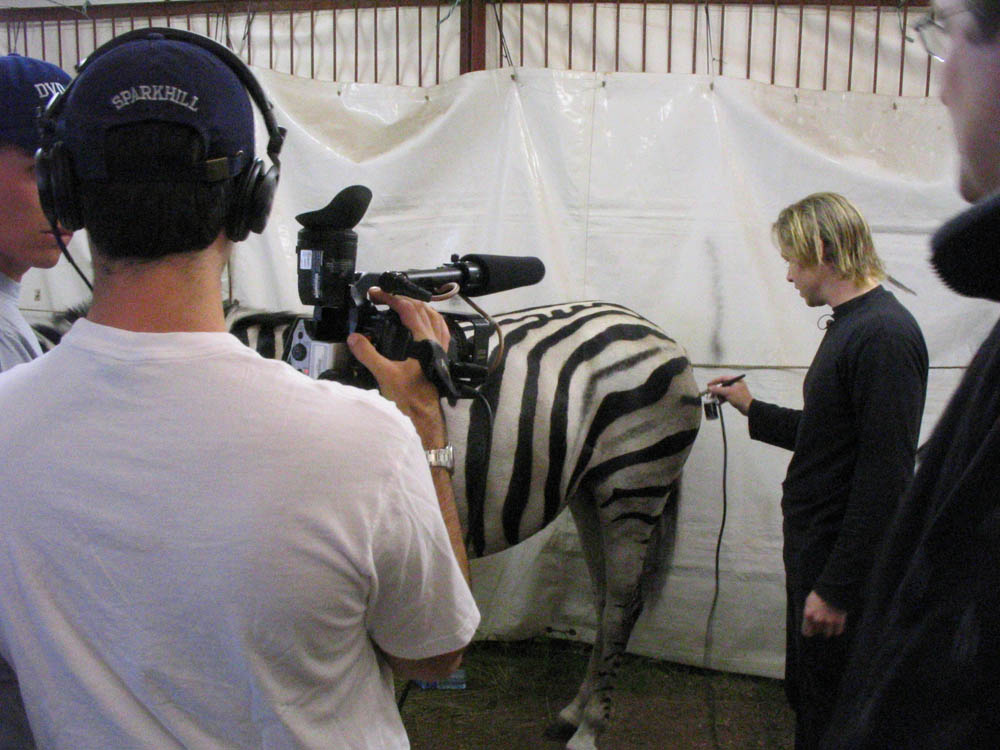 Striping a pony to look like a Zebra. © Sarah Rawson-Harris 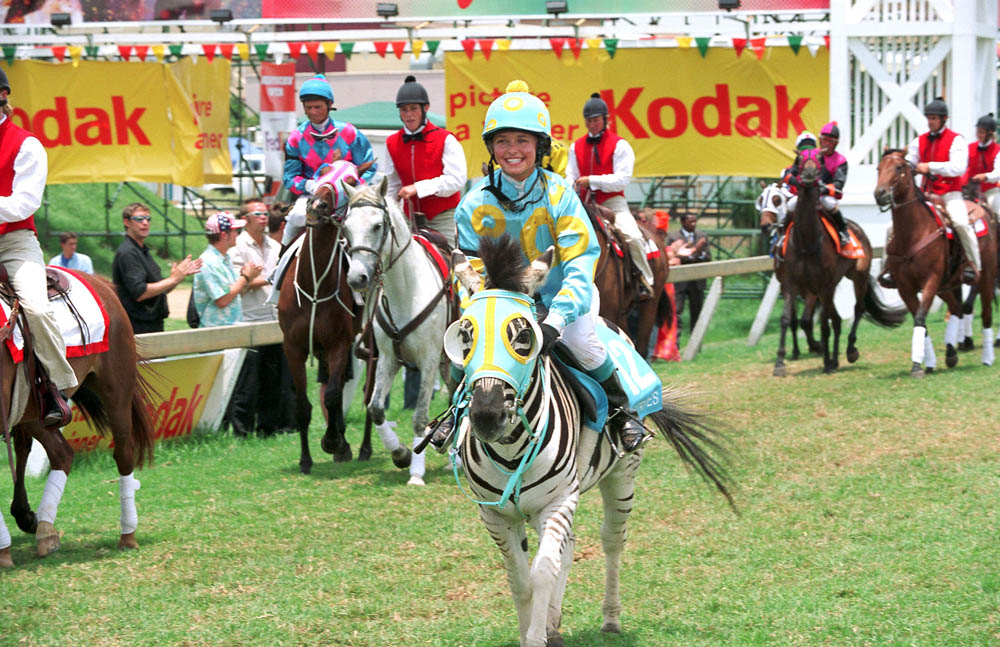 'Racing Stripes' had a budget of $30 million and went on to make just over $90 million. © RGR Collection/Alamy Stock Photo

“We treated them more like endurance horses, taking them up and down hills and along trails twice a day. Then I broke my wrist and was put in an office where I had to organise jockeys for the racing sequences.”

Krissy Harris also spent a lot of time inside coordinating the animal department. She had arrived on the job carrying 10 stable rakes. “Heath and I had done a few films in South Africa and I knew stablehands had to work with rubbish implements that were unwieldy and heavy; so I brought some with me from home which were light and easy to handle.”

Hers was a very busy, very big department. With first and second units often filming simultaneously, there was a need to have two of everything. “And when working an animal in a releasing/catching sequence, you require two trainers. One person is hiding over the hill who releases it, the animal goes to the actor and then the person who’s been training it has to cue that animal to stop, nod, rear or whatever is in the script.”

Krissy also had to teach a grey Arabian mare to jump who was Stripes’ love interest, Sandy; organise feed and, most importantly, purchase pilchards for the pelicans!

“We were in South Africa for eight months and before returning to Australia we organised an auction of horses and memorabilia. The producers made money when they sold these horses because they’d become so well trained.” They didn’t sell the zebras; these were turned out on to a predator-free reserve. “They just walked out of the trailer and started munching grass,” Steve Martin recalls.

The film went on to make just over $90 million. EQ