MAREE TOMKINSON:
NO TIME FOR MEDIOCRITY

A QUICK GUIDE TO CASTRATION

GETTING OUT & ABOUT WITH DAN STEERS

YOUNG RIDERS IN THE SPOTLIGHT

DIAMOND B CONTINUES TO PRODUCE GEMS

REDFORD TURNS UP THE VOLTAGE

The horse was full of bute; the rider full of booze. Being covered with lights to promote a breakfast cereal was not making their lives any brighter – they had to get away. 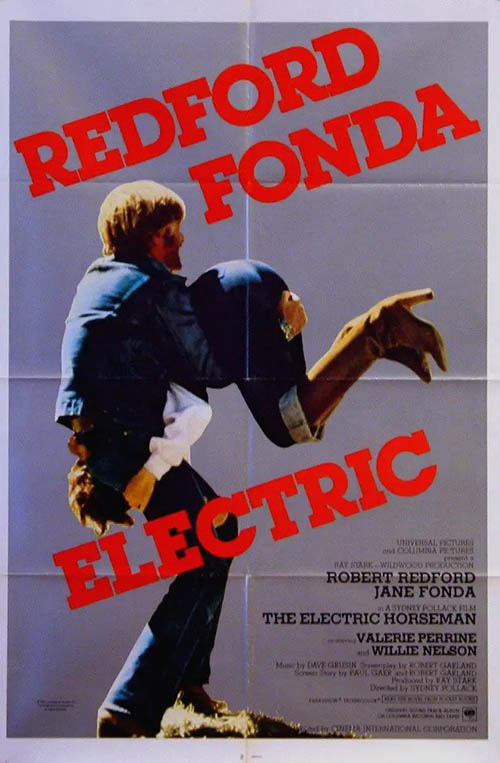 Directed by Sydney Pollack, The Electric Horseman (1979) starred Jane Fonda and Robert Redford.
Perfect for staff uniforms – for any business, large and small – club or committee uniforms, competitor prizes and volunteer uniforms and much more...

Directed by Sydney Pollack, The Electric Horseman (1979) starred Jane Fonda, playing TV journalist Hallie Martin, and Robert Redford as Sonny Steele, a retired champion rodeo star who has been put out to pasture. He survives by endorsing Ranch Breakfast Cereal which features a horse named Rising Star as its logo. Sonny wears an elaborate purple costume which illuminates when plugged into the horse’s saddle.

He is disillusioned by corporate greed and to endure the media circuit he often shows up drunk. He discovers the horse is drugged and has injuries which haven’t been properly treated – Rising Star, like his rider, is under the influence in order to tolerate the requirements of celebrity status. When booked to do a presentation at Caesar’s Palace, Steele rides the $12 million former galloper out of the casino and up the Las Vegas strip. He wants to make the horse better and then release him into a remote canyon with a mob of wild horses.

A chase begins involving police cars, choppers and Fonda, in high-heeled boots, determined to outsmart her media rivals with an exclusive story.

The character of Rising Star was played by Let’s Merge, a blood bay five-year-old thoroughbred by Urge to Merge. Barbara Parkening, of Burbank, purchased him as a yearling from an auction in Pomona, California. She renamed him High Country and put him into dressage training.

(Parkening and her friend, Hilda Gurney, are these days considered the grand old ladies of American dressage. Gurney, 78, is an Olympian who still rides 20 horses each day, and Parkening, an avid animal lover who once ran a travelling horse show, still attends equestrian events and recently donated a large amount of money to a Lemur Protection Centre in North Carolina!)

When Parkening had learned that wrangler, Ken Lee, credited as “livestock supervisor”, was searching for a stallion to play a racehorse, she knew High Country could do the job. Lee had worn out a set of tyres between Carmel and San Diego looking for the right horse.

“We wanted stature and regalness — that’s a stallion,” Lee had stated. “And we wanted to keep away from blacks or greys. Disposition was also very important. We didn’t want a racer as they’re too keyed up and only know how to run. High Country was a blood bay with just the right temperament.”

The movie’s production company nicknamed him “High C” and he behaved beautifully throughout the picture. Redford did all his own riding.

“For me it was a chance to demonstrate my own particular affinity for horses, but the film is also about a way of life out west whose disappearance is sad but inevitable. Still, at the heart of the story is a man whose sensitivity is towards a horse.” — Robert Redford 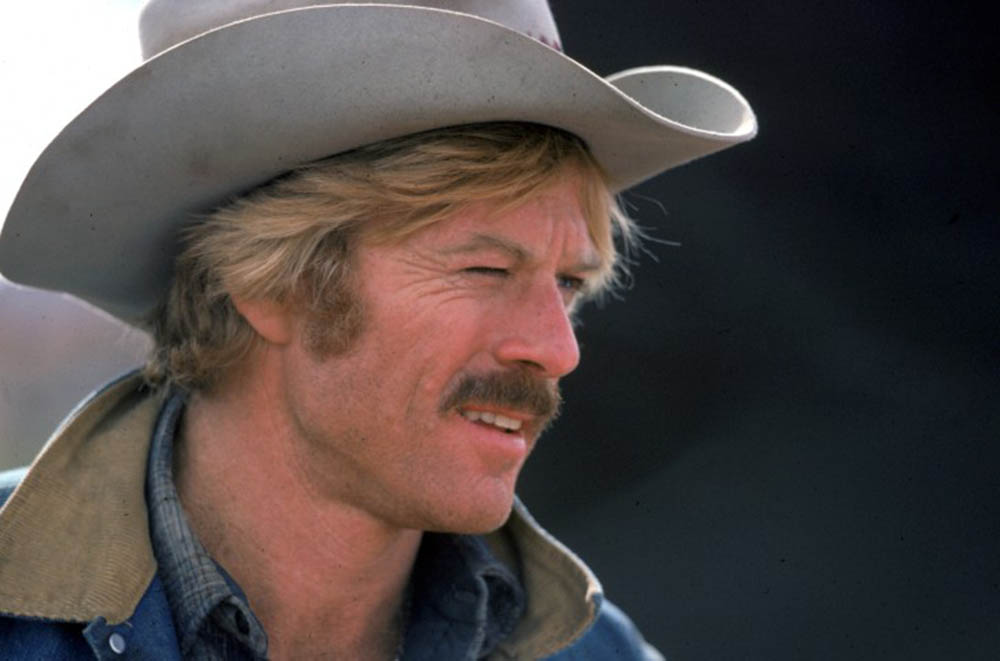 Some of The Electric Horseman’s most difficult sequences were shot in Caesar’s Palace. The picture has the distinction of being the first movie made in an internationally-known casino during regular business.

The night before this filming, High C had been introduced to Caesar’s convention centre to test his reaction to the lights and to the cowboy’s shimmering costume, which had been designed by the director’s brother, Bernie Pollack, and had cost $35,000 to make. “The horse was fine,” recalled Lee.

The scene where Redford rides through the casino was filmed after three in the morning using extras instead of genuine gamblers. But the mounted charge down the neon strip was shot at the height of Friday evening traffic. One sceptical movie critic later wrote that “these scenes were an outrageous assault on probability but, in their unexpectedness, they were a delight”. 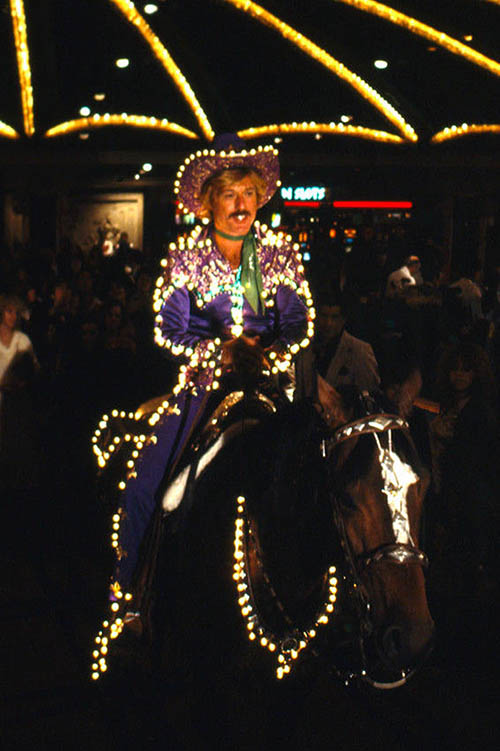 The main thing was they worked and no animals were harmed in the process.

Other sceptics questioned aspects of the film’s narrative, such as the methods used to cure Rising Star’s tendons: “Sonny begins a homeopathic healing process involving a fire, a gunny sack and six dozen boxes of eucalyptus tea bags. I’m unsure how that all relates to an injured tendon – but anyway.”

They also questioned whether setting the stallion free was in its best interests: “Whether this stallion, unshod and not knowing where his next meal would be coming from, could thrive or even survive in the wild is apparently uncertain enough for director Pollack to go full bore on this concept. To consider an extremely highly trained, medicated and pampered creature such as Rising Star handling a trek with Sonny, let alone fending for itself in unknown territory without injury or agitation, defies common sense. But is it possible? If so, it’s evidently not recommended. The Humane Society of the United States lists six approved methods for ‘relinquishing’ a horse, none of which involves turning it loose in a pack of wild horses… probably because there are too many of them for the government to handle, threatening not only the available limited resources but creating opportunities for poachers looking to cash in on overseas horse-meat demand.”

But never let harsh, justifiable words get in the way of an enjoyable story involving good camerawork, agreeable acting and a wonderful debut performance from Willie Nelson. He was also deeply involved with the film’s soundtrack, recording My Heroes Have Always Been Cowboys, Midnight Rider, Mammas Don’t Let Your Babies Grow Up to Be Cowboys, and So You Think You’re a Cowboy. 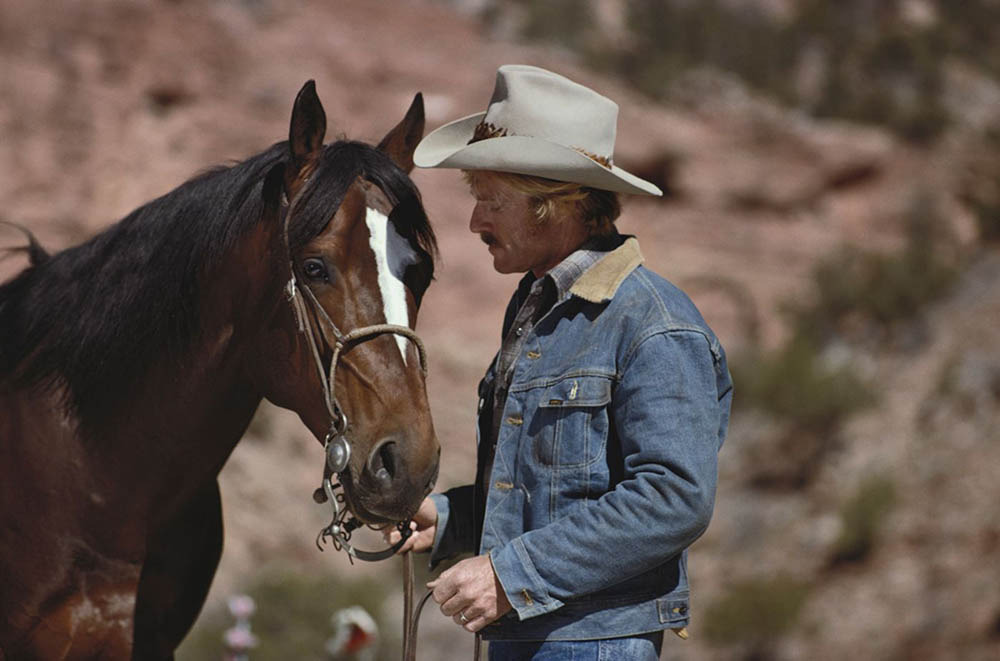 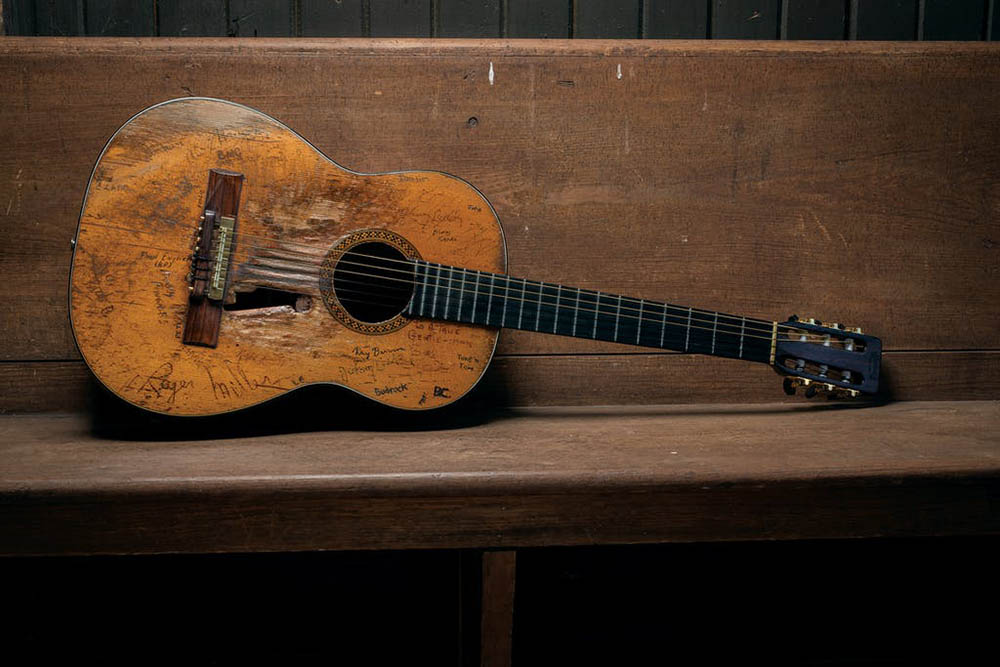 “What threatens them
threatens us all.”

Now in his late 80s, Nelson is a big supporter of Habitat for Horses, an organisation working to end horse slaughter. A few years ago, he saved 70 from the abattoirs which are now handfed twice daily and roam around his 700-acre property.

Redford, too, is committed to horse welfare and last year teamed with Bruce Springsteen to make The Mustangs: America’s Wild Horses. This feature-length documentary tells the story about the country’s wild horses from their turbulent history to their uncertain future. It takes audiences on an odyssey throughout the States to places that few people have seen, with more than 80,000 wild horses on public lands and more than 50,000 in government corrals. It will shortly be showing in cinemas followed by a release to various online services.

“America’s wild horses are fighting their last stand,” says Redford, the documentary’s executive producer. “Increasing competition for our natural resources threatens our wilderness areas, our wild horses and other wildlife species. Horses are interwoven into the very fabric of what is America. What threatens them threatens us all.”

TRIVIA: When filming High C’s release into the wild to ensure he would be caught after this scene, a mare in heat was tied to an off-camera tree. Wranglers snatched the ardent stallion before romance could develop.

At the close of The Electric Horseman, Redford had taken Rising Star to his ranch in Sundance, Utah, where the stallion was cared for until his death at the age of 18.

Costing $12.5 million to make, the film did well at the box office making almost $62 million. EQ