He was only 15hh, had a crooked leg, and was a stubborn, rebellious loser. However, Seabiscuit became a champion and won the hearts of Americans during the Great Depression of the 1930s. 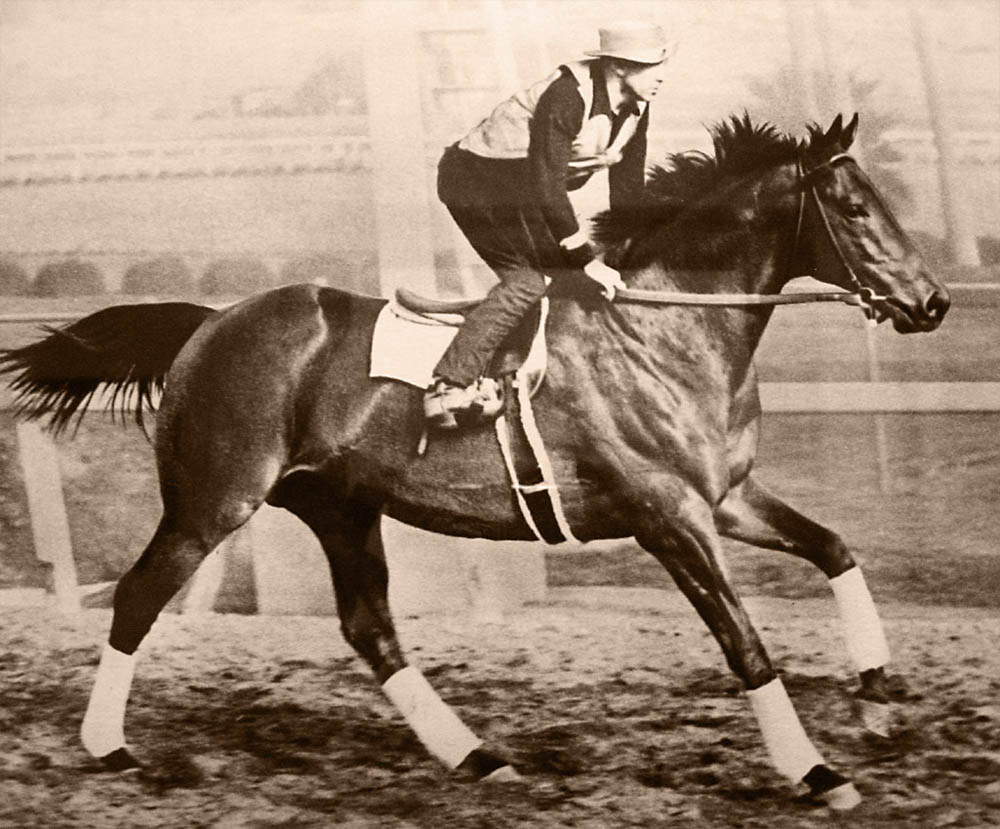 Seabiscuit, pictured here in training, was seen as a beacon of hope during the Great Depression in America.
Targeted nutrition for world class performance.

Seabiscuit, a blood-bay, was well bred but had none of the physical attributes of those in his ancestral lineage. He had a thin, wispy tail, his legs were short, he walked in an odd way, ran with a flailing, eggbeater-action and would sleep for long stretches at a time. Yet on a momentous afternoon in November 1938, he beat Triple Crown winner War Admiral by four lengths on a Pimlico racetrack in Baltimore and was voted American Horse of the Year.

Fifty years earlier The Story of Seabiscuit had been made by Warner Brothers starring Shirley Temple speaking in a terrible Irish accent. Dismissed by most critics as historically inaccurate, poorly acted and predictable, the film’s equine actors were also second-rate. The director had to resort to archival news footage to depict the racing sequences.

For the 2003 film made by Universal Studios, the selection of horses was a mammoth task for Rusty Hendrickson, an experienced wrangler whose credits include The Patriot, Dances With Wolves, The Horse Whisperer and, more recently, Tarantino pictures The Hateful Eight and Django Unchained.

Forty horses were initially selected from around America aged between three and seven. Most were Thoroughbreds, plus several Quarter Horses and a solid-coloured Appaloosa. None of the Thoroughbreds had been winners. “A good movie horse is different from a great racehorse,” said Hendrickson.

Six weeks before filming all the candidates were taught to follow the camera car by working alongside a pick-up truck; they were encouraged to stand for long periods of time in the starting gates and tolerate overhead microphones. As the weeks went by, one small Thoroughbred named Fighting Furrari emerged as the star.

“He resembled the real Seabiscuit,” recalled Hendrickson, “and had a good temperament which made him ideal for Tobey Maguire who could handle him confidently.” Several years before he had taught the actor on Ride with the Devil, a western directed by Ang Lee. 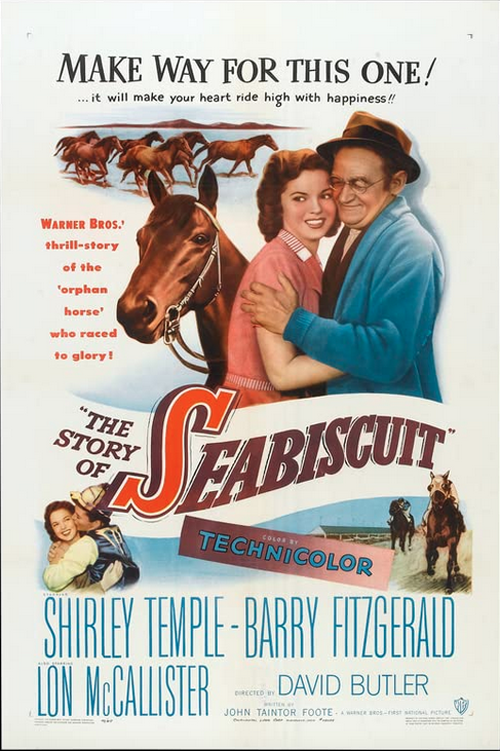 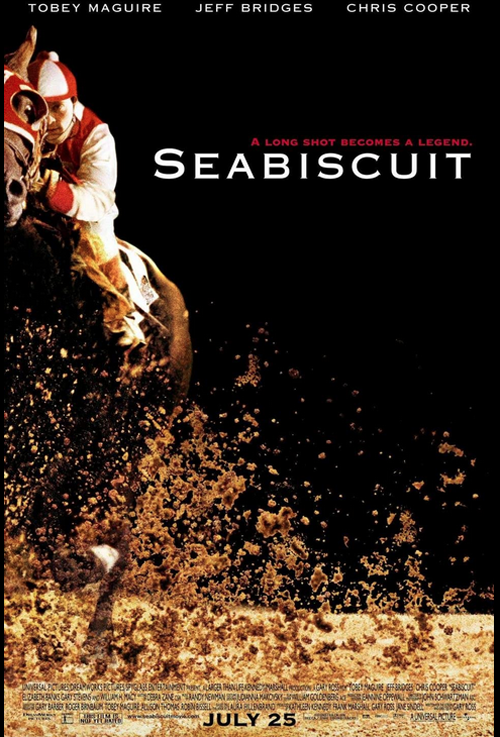 TRIVIA:  Seabiscuit received a total of seven Academy Award nominations but no wins. It was 2004 and The Lord of the Rings: The Return of the King took out all the major Oscars. 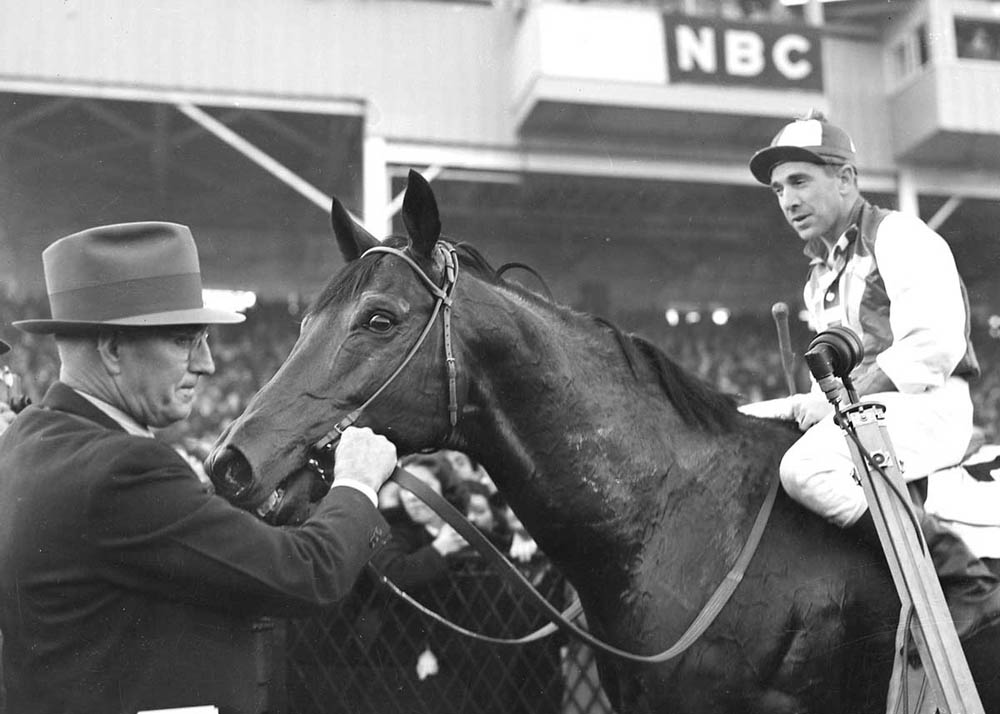 The real Seabiscuit with jockey George Woolf and trainer Tom Smith after beating War Admiral in 1938.

TRIVIA: Randy Newman composed the score which was nominated for a Grammy (Lord of the Rings won that, too!) Newman’s homage to horseracing was reviewed favourably by music critics and no, it did not include Short People. 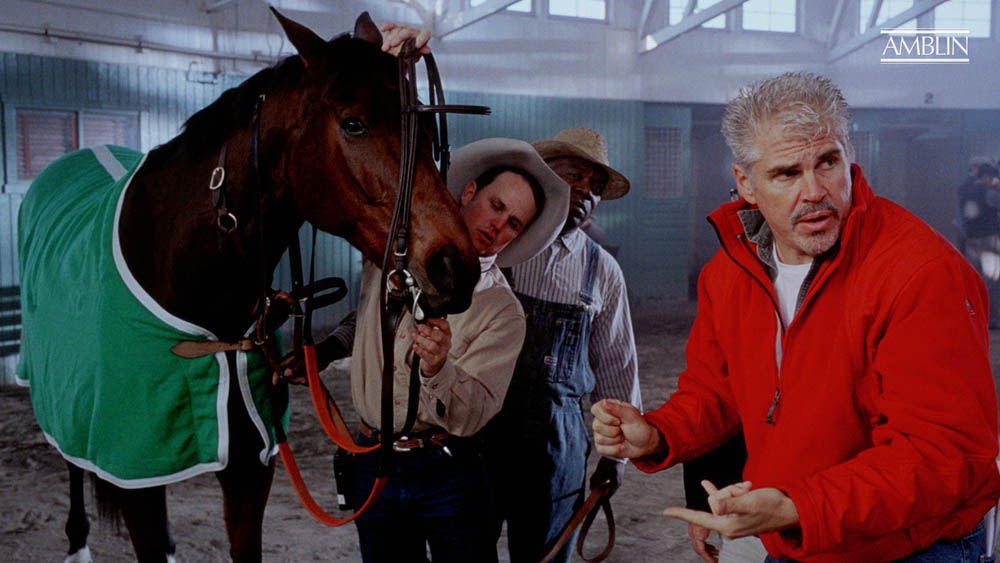 A behind the scenes rehearsal with director Gary Ross (right)

But riding like a jockey is something else again – enter the Equicizer. Director Ross explained that during much of the film Maguire was mounted on this device, although he had taken lessons in how to crouch down during a race by Chris McCarron. This leading American jockey worked as technical advisor and also acted in the movie.

Maguire admitted that he was sitting on it for all his close-ups. “It was attached to a flatbed truck,” he said. “We’d cruise around the track at 35mph (56km/h) moving forward and backward and side to side. I’d be on the balls of my feet standing for a minute and ‘driving’ the horse. And it’s not me in any of the races where there are bumping sequences.”

During pre-production, Ross had been at the Santa Anita racetrack and came upon a mechanical horse. “I saw it when I was passing through the jockeys’ room. It was spring-loaded to duplicate the exact motion of riding, and I figured that if I could mechanise one and put it on a truck with a camera platform I could drive Tobey around the track and shoot him with the grandstand and the crowd whizzing by. I’d be able to get the camera right next to his face and it would be a totally safe environment.”

He had it built and it worked, however, Tobey still found it demanding: “I didn’t realise what kind of athletes jockeys were. The first time I got up in the stirrups and did a bit of a gallop on the Equicizer, after a couple of minutes my legs were noodles. I could barely stand up.”

For the film’s other leading players their riding scenes were less complicated. Both Bridges and Cooper were reasonably experienced and nothing they had to do was particularly challenging.

“I’ve been around horses most of my life,” said Bridges. “Dad (Lloyd Bridges) had taught me to ride a long time ago. I used to love it when he made a western ’cause he’d come home in cowboy garb. Having to ride in Seabiscuit was great.”

As a young man Cooper had lived and worked on a ranch and raised cattle. “It was a great life when you’re a young kid; for me it was either going to be acting or ranching. And acting won out!” He fondly recalls the film’s opening scenes where he is preparing to round up a mob of mustangs.

“It was just a beautiful set-up and a beautiful introduction to my character. I was very proud of that film and it was great working with Jeff, he’s a good man.”

In that scene he takes six horses across the open range and attempts to lasso one of them. It was a stuntman doing the lassoing and that action took place in a contained area. The rope was immediately released before any tension was applied.

In another sequence, Charles (Jeff Bridges) mounts his horse and goes for a ride with his friend Marcella (Elizabeth Banks), who is also a skilled rider. The actors were only on the horses for a brief time, leaving most of the riding to the professionals.

Never believe everything you see on the screen or hear from a movie star!

A total of 10 horses shared the title role, each one displaying a distinct characteristic of the little bay stallion. Gravy, who was trained to rear and paw, played the disgruntled Seabiscuit. Muffin was the lazy one who had all the sleeping scenes, and Fighting Furrari was selected for the racing sequences. All were Thoroughbreds except for a trick Quarter Horse owned by Hendrickson. Triple Digit Cash specialised in “mouth work” and it is him the audience is seeing when Seabiscuit rips the silks off a rival jockey. 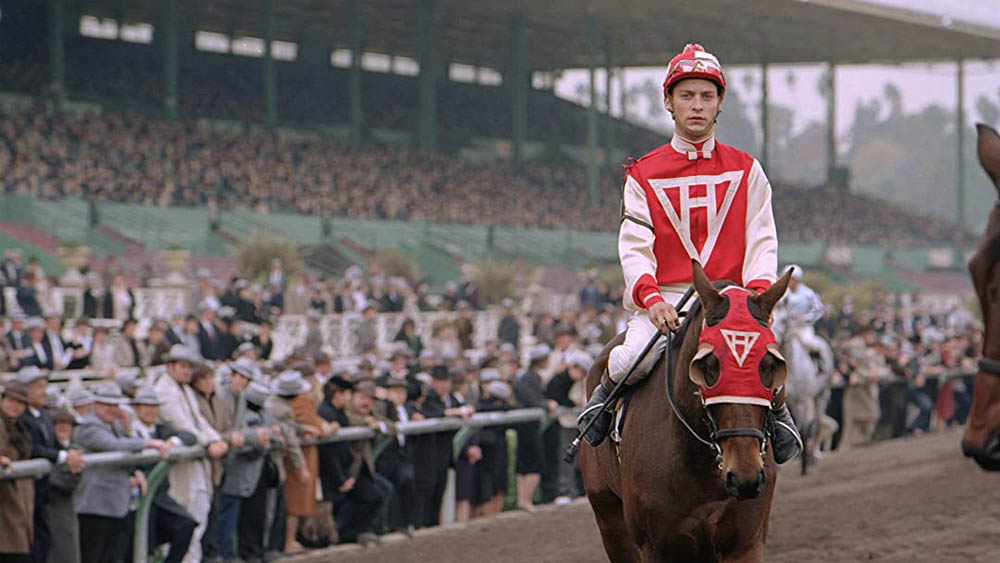 TRIVIA: Comparisons between Phar Lap and Seabiscuit are often drawn although they weren’t around at the same time. Seabiscuit was foaled 13 months after the death, in 1932, of the legendary Australian gelding. 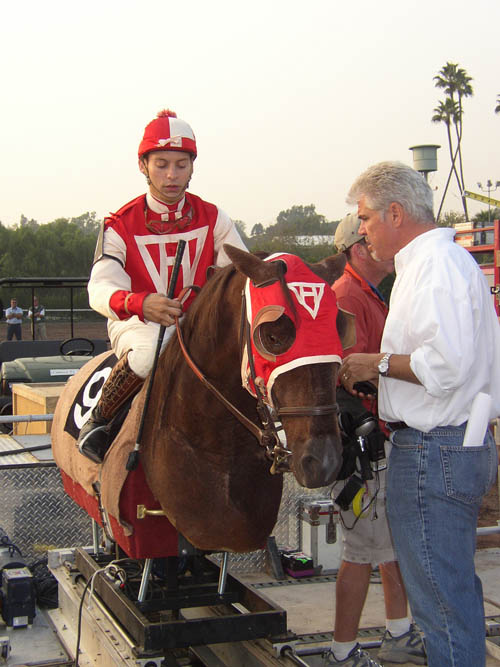 Tobey Maguire preparing for his role on the Equicizer with director Gary Ross.

All the film’s racing footage was shot on actual racetracks but the horses were never made to run more than three furlongs per take. And because they had to be constantly trucked to and from various locations their weight was carefully maintained with alfalfa (lucerne) hay and beet pulp. Veterinarians and farriers were on site and teams of expert grooms and handlers cared for them around-the-clock.

None were harmed during the making of the picture and all were rehomed at the end of filming. Only one of the Thoroughbreds returned to racing “but didn’t do very well”, recalled Hendrickson. And technical advisor McCarron bought one as a show horse prospect for his daughter.

Fighting Furrari, the movie’s major galloping horse, was relocated in 2019 to a foundation in Half Moon Bay, California, specialising in equine-assisted programs for children with autism. Prior to his move, the 21-year-old had been Santa Anita Park’s mascot where on weekends he was tacked up in authentic Seabiscuit attire and led around a holding yard where his handler would address the public, answer questions, and allow people to pat him and watch him do tricks.

Director Gary Ross came away from Seabiscuit with a renewed admiration for horses and the people who ride them. “This was a story I really wanted to tell,” he declared at one of many press conferences, “and to do it we had to honour the history while translating it to film. It was a huge task — a story that spans years and comes to embody a nation during a particular time. But I’m very proud of it and I think we’ve managed to convey it all on the screen.” The picture did well at the box office and to date has made almost $150 million.

The real Seabiscuit retired from racing in 1940. He lived at a ranch in Willits, California, and only sired 108 foals of which just two were moderately successful on the track. He was used by workers for pleasure riding and checking cattle. During his time at the ranch he received over 50,000 visitors. He died in 1947 of a suspected heart attack a few days before turning 14.

In the next edition of Horses and Movies, Troy (2004), starring Brad Pitt, Eric Bana and Orlando Bloom. EQ