DOM & JIMMIE TAKE IT TO THE NEXT LEVEL

COMPETITION BACK WITH A BANG

IRISH WOMEN RIDE TO THE RESCUE

GRAND PRIX: MAKING THE CUT AT DIAMOND B

MAKING SENSE OF ALL THE BITS & PIECES

ELECTROLYTES: GETTING OUT WHAT YOU PUT IN

SO, YOU WANT TO BE A COWHAND?

It was maligned by reviewers and mocked by scholars, yet this sword-and-sandal epic starring Brad Pitt, Eric Bana and Orlando Bloom – plus scores of horses – was a box office smash. 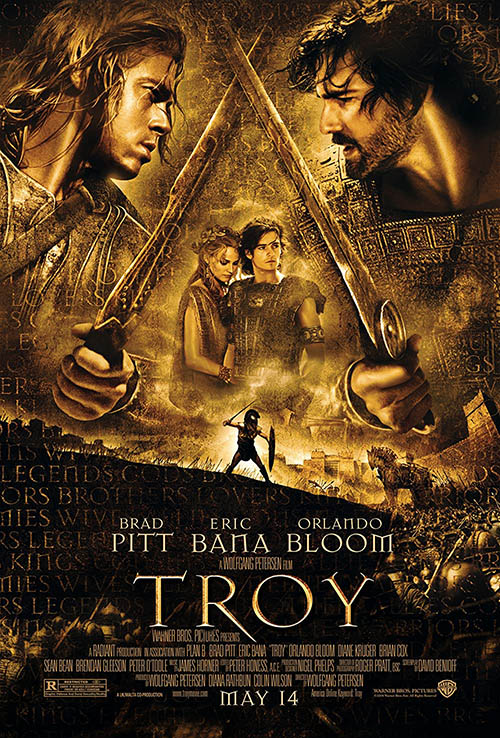 Costing $185 million, Troy (Warner Bros, 2004) took months to make in four different countries. It was criticised for misrepresenting Homer’s The Iliad and for running for more than two-and-half hours. Despite its detractors, Troy went on to make over half a billion dollars.

Directed by Wolfgang Petersen, the production employed thousands of extras, hundreds of stuntmen and, most importantly, scores of horses from Malta, Madrid and Mexico. Chief wrangler was Raliegh Wilson – whose life would make an interesting documentary in itself.

For Troy, he first selected 15 Andalusians, importing them from Madrid to Malta, the location for the walled city of Troy. (The wall fell down in a hurricane and had to be rebuilt at enormous expense). Wilson also sourced 30 thoroughbred types from Malta where local polo players worked as extras in the fight scenes. Being able to wield a mallet made it easy for them to carry a shield.

One stunt required liberty horses to jump through a ring of fire – the flames were propane-powered and very carefully controlled, and the horses were protected from head to toe with fire-retardant gel.

Others selected by Wilson were used in four chariot teams. They were trained to pull vehicles made of aluminium which would flip over more easily, and the horses wore breakaway harnesses.

Thankfully, Troy’s footage did not replicate the sickening scenes in Ben-Hur, made in 1925, when over 150 horses were killed during the chariot race. Several film historians have claimed there were also animal and stuntmen fatalities during the making of the 1959 version starring Charlton Heston, but this was denied by the producers. One will never know the real truth.

Two of Troy’s stars, Brad Pitt (Achilles) and Orlando Bloom (Paris) had to learn to drive the chariots, although both were skilled as riders. Bloom, especially, had done a lot of riding when playing the warrior elf Legolas in The Lord of the Rings, a role which had propelled him to heartthrob status around the world.

Eric Bana (Hector) had been cast early so had time to get fit and practice both riding and sword fighting. “I had many months of preparation back home in Australia before leaving for London,” he says. “It wasn’t so much about gym work, it was about learning the skills, because if you weren’t on top of it you were either going to fall off a horse and hurt yourself or get whacked with a sword. Brad and I didn’t have any stunt doubles.” 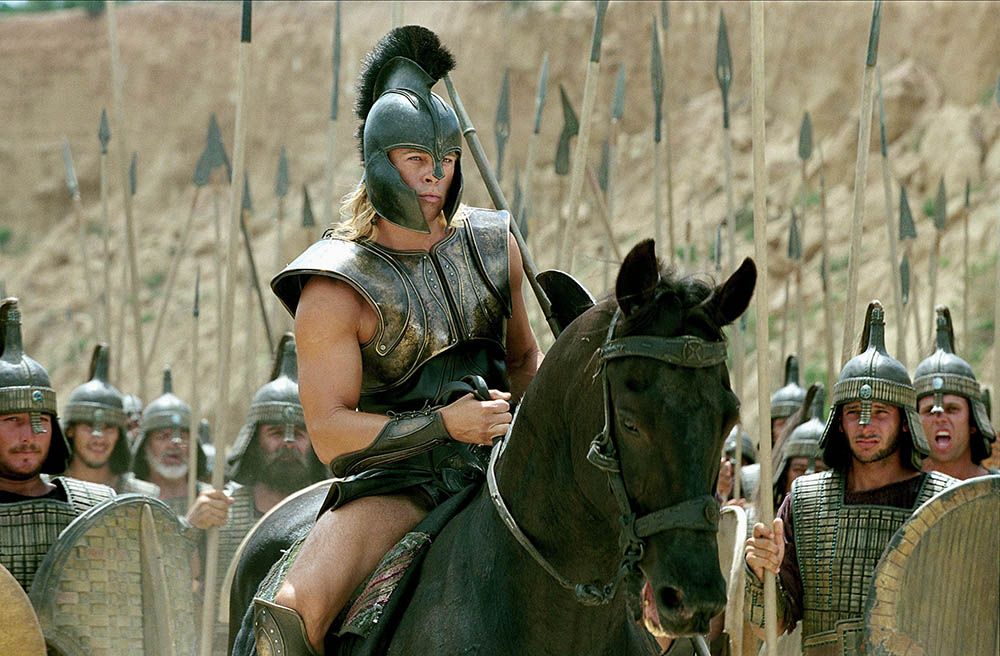 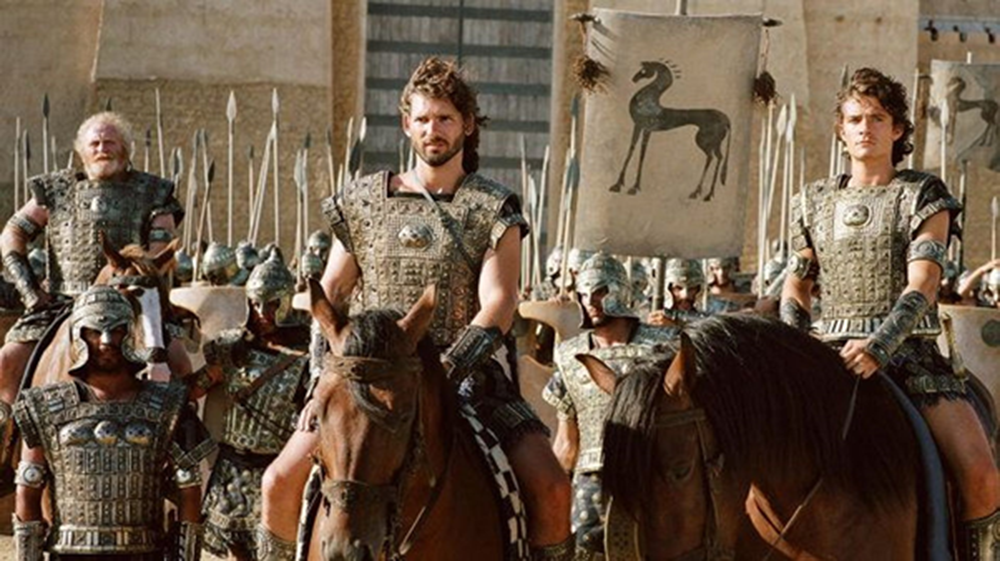 Eric Bana and Orlando Bloom were key actors who spent plenty of time on horseback.

However, Pitt sometimes had a body double. Because his legs looked too skinny in some scenes, this footage was re-shot using a stand-in reported to have “thighs like tree trunks”.

TRIVIA: Back in the ’50s, Paul Newman had been offered the role of Judah in Ben-Hur. He turned it down because he’d already done one biblical film, The Silver Chalice (1954), and hated the experience. He also said it taught him that he didn’t have the legs to wear a tunic!

Saddles didn’t exist in ancient Greece and the film’s producers insisted upon authenticity and custom-made tack was to have no shiny buckles. What Bana did not mention was that to ensure the actors’ safety, emergency handholds were attached to surcingles hidden under the blankets which served as saddles. 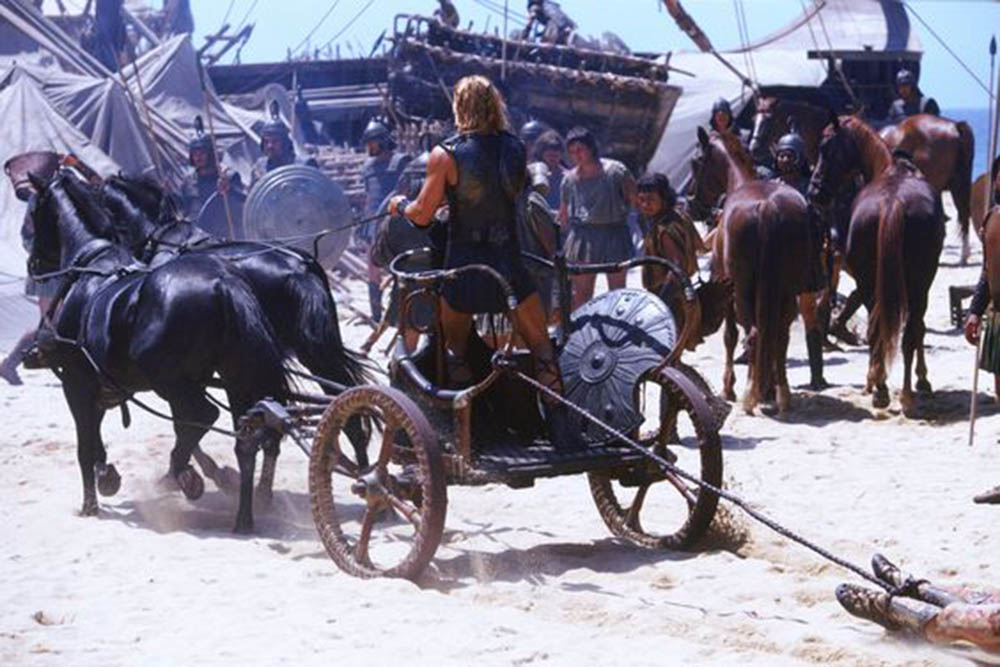 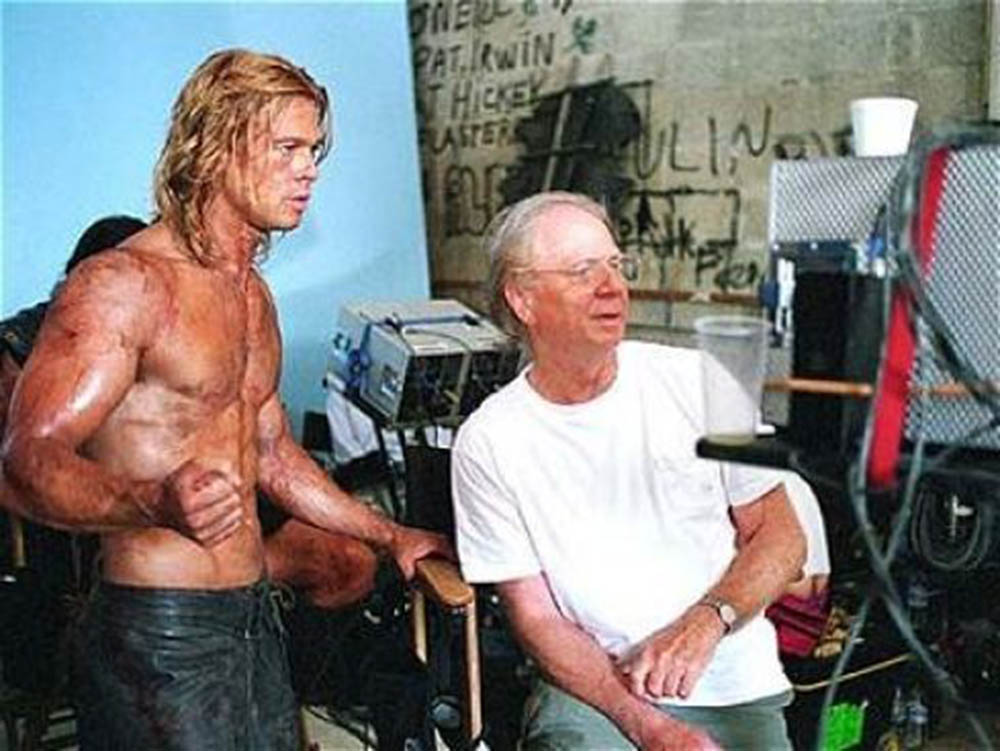 When the production moved to Baja California in Mexico, Raliegh Wilson had to acquire a whole new stable. He and his team scoured the country for horses resembling the ones used in Malta. They secured 50 from Durango, Colorado, and hired 50 riders, as well as 20 Canadian draughts from a Mennonite community. These giants were accustomed to hauling heavy milk wagons but had to be schooled in carting cattle hides piled with “corpses” during scenes depicting the aftermath of battles.

Other finer breeds were purchased as mounts for extras or trained to fall or rear, and several Andalusians were acquired and dyed to match the ones in Malta.

The horse department in Mexico was a cleared acre which featured rows of shaded 12’x12’ (4x4m) pens, a training and exercising arena, water tanks and generators. In the tropical climate, algae would quickly form on the horses’ drinking water so tanks had to be scrubbed twice weekly; electrolytes were also added.

Thirty grooms were employed to attend to the animals around-the-clock.

The shooting of the action scenes was a nightmare. Filming on the beach had to be undertaken with care because of the turtle population, so two on-set biologists were hired to ensure the eggs stayed safe. Also, the weather was blisteringly hot. During a major fight scene with 4,000 extras – about 2,000 of whom were trained Bulgarian athletes – several fainted from heat exhaustion. And, to cap it all, the leading man hurt his tendon and, yes, it was his Achilles’ tendon.

“It was wear and tear from all that jumping and fighting in the sand,” recalls Pitt. “My foot was saying ‘I’m done – I need a rest’.”

Raliegh Wilson was very aware that his movie horses had to be in top physical shape. Proper diet, excellent care and a rigorous conditioning schedule resulted in a fit and healthy bunch of equine actors.

As equestrian writer Petrine Day Mitchum noted: “By the time the production wrapped and the horses were returned to their original owners – or placed in new homes – they were in the best condition of their lives”. 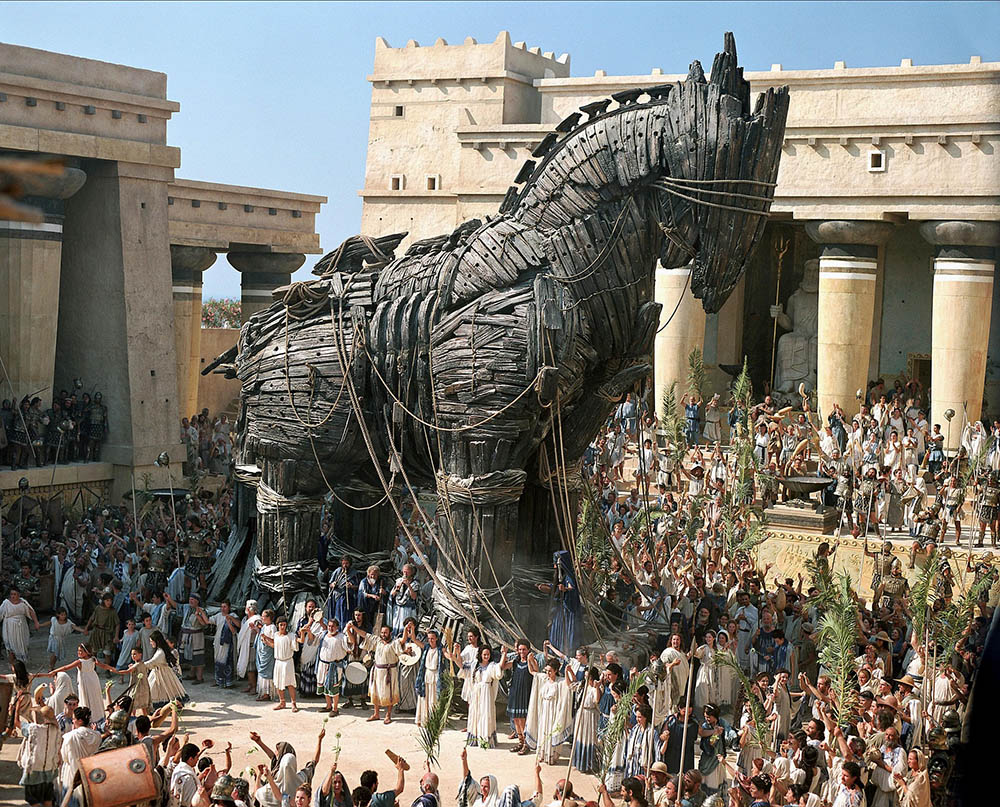 The Trojan Horse was arguably the most famous equine in the movie! 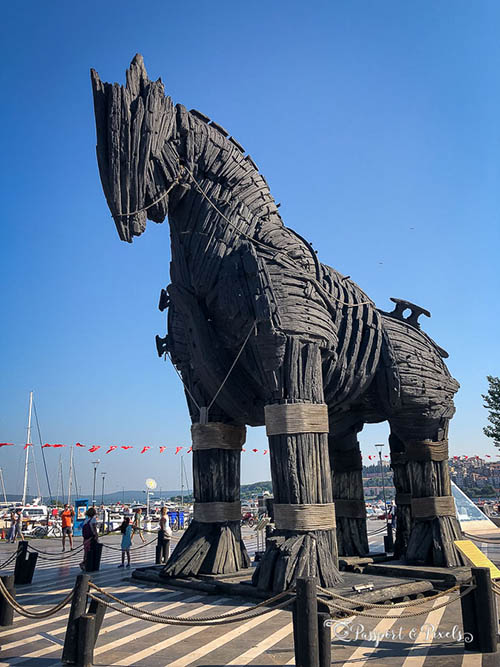 ‘NO GODS OR GAY MEN’

And they didn’t have to read some of the scathing reviews about their human co-stars, such as the one headed ‘No gods or gay men but a whole lot of llamas’, by Alex von Tunzelmann in The Guardian: “Pitt’s Achilles is a hero with an attitude problem the size of Asia Minor, who spends most of his time lounging around in a kaftan and getting laid. Not a million miles from the Homeric depiction, but much more annoying. In classical history Achilles was disguised as a girl to avoid going to war. The film wimps out of putting Pitt in a dress, and instead has him in a cobalt blue sarong, necklace of shells and tousled honey-blond wig. He looks like a creepy yoga teacher at an overpriced Californian spa.

“Achilles is seen with his lover Patroclus, who the film insists is just his cousin. It seems the Greek hero has undergone a radical straightening process – and I’m not talking about his hair any more. No gods and no gay men. You’ve got to wonder why they bothered making a film about ancient Greece in the first place.

“As the Greek ships arrive at Troy, the panicking people in the marketplace run past the camera with a donkey, a birdcage, and two llamas. That’s right: llamas. From Peru. It is impossible that there would have been any llamas in Europe or Asia for at least another 2,800 years. Unless these ones were really good swimmers.

“The Trojans venture out one morning to find the Greeks have vanished, leaving the beach covered in smoking embers, heaps of rubbish and plague-ridden corpses. A bit like Somerset the day after the Glastonbury Festival. They have also left a mysterious giant wooden horse.”

Probably the most memorable horse in the movie is this one. Made in England, it was presented by Warner Bros to the Turkish government when filming wrapped, as a small consolation for the fact that the picture wasn’t made in that country. Twelve tonnes of steel and fibreglass, held together with bolts, ropes and nails, dominates the Cavakkale boardwalk an hour from the ruins of the real Troy. The tourism director was thrilled: “We’re very happy that Troy was made, it’s been great advertising.”

And despite some of the acerbic critiques and dismissive reviews, it made money, many punters loved it and, most importantly, no horses were harmed in its making. EQ