Snowman melted the heart of a nation. In the late 1950s, this grey horse, who had narrowly escaped the slaughterhouse, made history as a champion American showjumper. 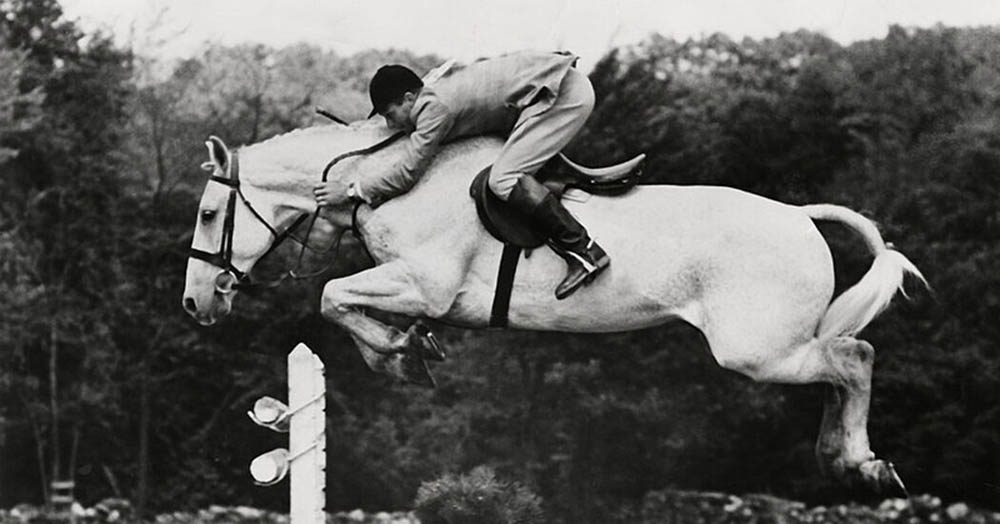 Harry deLeyer and Snowman had a special partnership.
Click here to find out more about 4Cyte’s range. 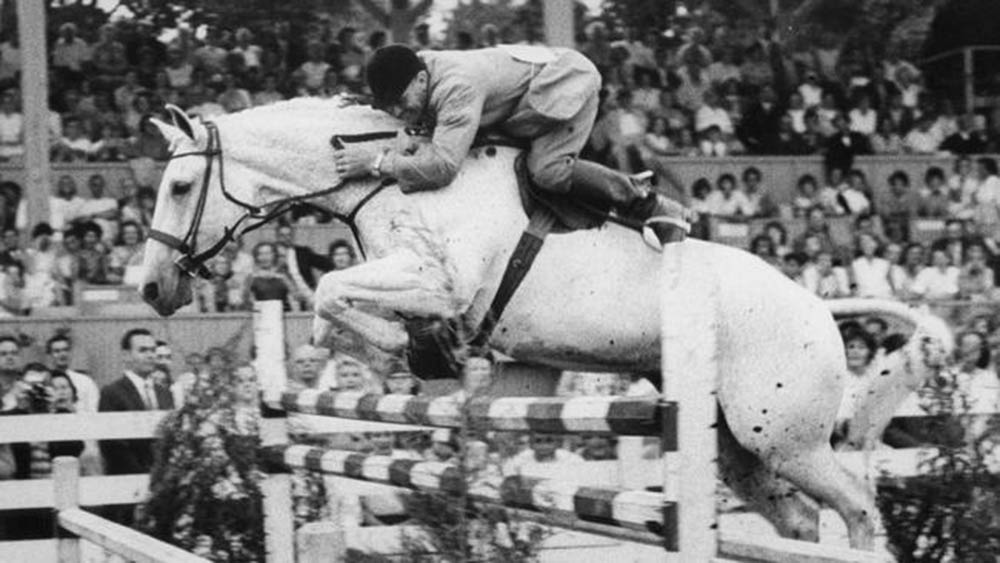 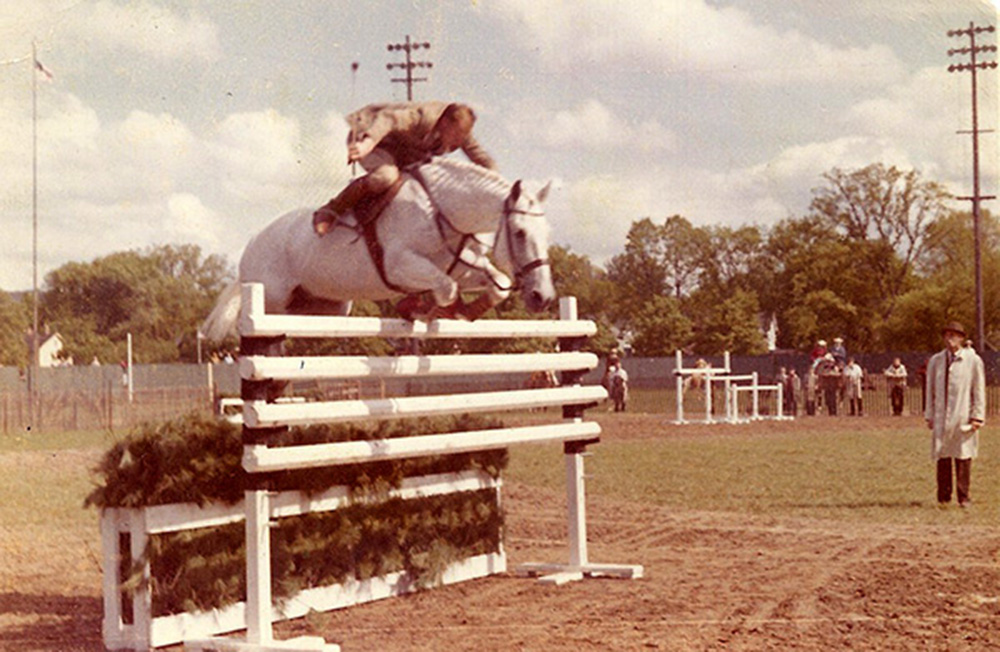 No hands! Harry was a believer in leaving the horse's mouth alone over fences.

Harry & Snowman recounts the story of Snowman and the Dutch horseman who saved him, trained him and rode him in a most unorthodox way. It was made in 2015 by Ron Davis, a documentarian who clearly understood the sport. Blended with archival footage and photos are interviews with veteran equestrians who witnessed the horse’s rise to fame. The documentary went on to win a raft of audience awards at American film festivals.

The Dutch horseman was Henricus “Harry” deLeyer, the eldest of 12 children, who grew up on a farm in the Netherlands. His parents owned a brewery and, as a young man, he was a successful showjumping rider. During the German occupation he was in the Resistance helping Jews to avoid persecution and escape from Holland.

Several years ago, he shared some of his wartime memories with an American journalist: “In front of our barn was a manure area. We dug a ditch right next to it over which we put a cover with leaves on top,” he recalled. “We knew they’d search our cellar, but they’d never go near the manure. That’s where we hid Jews, and others, one or two at time while we tried to get them to safety.

“The Nazis also targeted the British and American planes that flew over us to bomb Germany. When their planes were hit the flyers parachuted into the fields as the Germans tried to shoot them down. We buried one American who’d been killed, put flowers on the grave and sent the photo and his dog tag to his parents. They were thankful for what we did and decided to sponsor me and my wife in the US after the war.

“We went to Greensboro, North Carolina, in 1950, where I worked on a tobacco farm, and later we went to the Knox School for Girls on Long Island where I taught riding for 22 years.”

Harry first met Snowman in 1956 at a Pennsylvania horse auction. He arrived late and only the rejects were left all boarded onto a slaughter truck. “He looked at me, I looked at him – he had a spark in his eye,” recalled Harry, “and I thought, ‘they’re going to kill him for dog meat’. I couldn’t let that happen.” He was told the tall grey gelding was eight years old and had been used as a plough horse by the local Amish people. Harry bought him for $80.

Harry used him for children’s riding lessons at his barn and after a few months sold him for $160 to a neighbour seven miles away who needed an easy horse to plough his land. But Snowman no longer wanted to live the life of a plough horse. He wanted to be with the man who had saved his life and would clear every obstacle in his path to rejoin Harry.

“The bugger kept on coming back so the chap who’d bought him suggested the horse board with me. After a couple of months he hadn’t paid me a penny in boarding fees and told me to keep the horse.”

Snowman’s jumping career began, and two years later, in 1958, he and Harry won the Triple Crown – the American Horse Shows Association Horse of the Year, Professional Horseman’s Association Champion and Champion of Madison Square Garden’s Diamond Jubilee. A year later Snowman made history as the first horse to win the Open Jumper Championship two years in a row.

“I never thought he’d be a champion at Madison Square Gardens,” Harry repeatedly told reporters over the years, still in disbelief at his horse’s performance against the world’s best and most expensive showjumpers. “I remember people laughed,” he says when aficionados first laid eyes on the pairing in such illustrious competition. They quickly realised the horse had such an ability to jump high he would even jump over other horses. 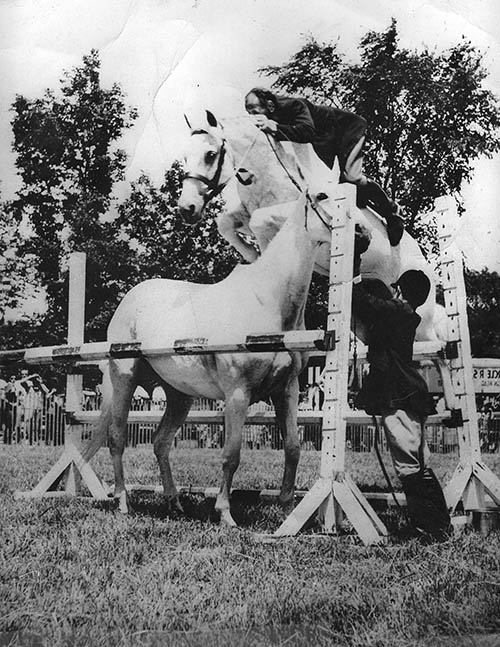 Snowman seemed to have no limits; he'd even jump other horses! 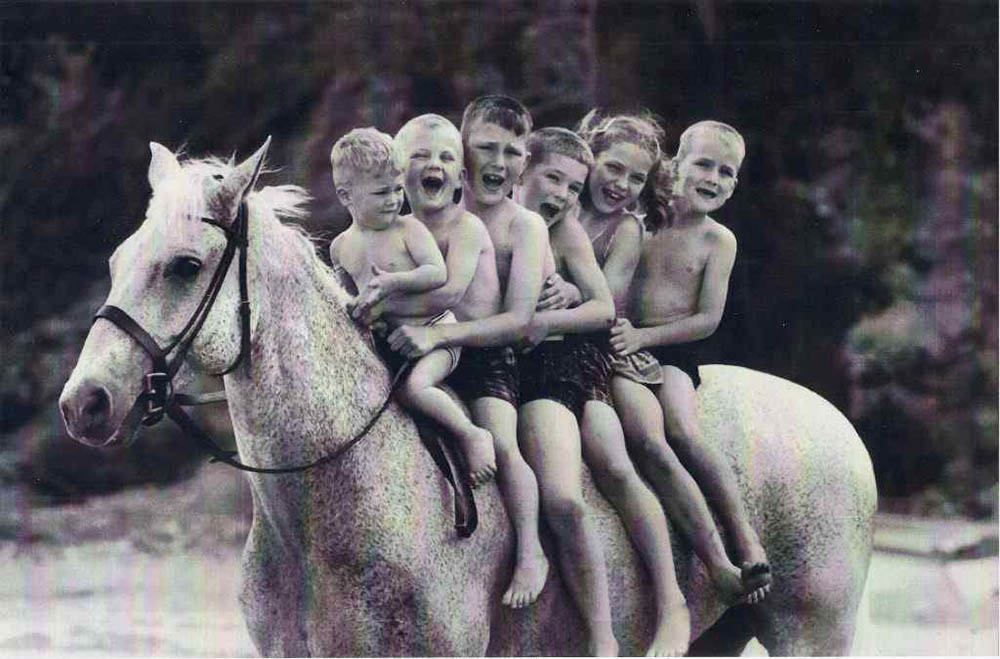 Snowman was known for his quiet temperament.

“So the crowd just loved him. He was the very cheapest of horses doing the impossible. After Madison Square Garden, he was a superstar, everybody knew about him.”

Snowman was a champion twice at Madison Square Garden when its National Horse Show marked the beginning of New York City’s social season, which attracted stars such as Audrey Hepburn and Elizabeth Taylor.

Aside from being a supremely talented athlete, Snowman had the sweetest of natures. This documentary not only features competition footage; there are home movies of him at the beach cantering with six deLeyer siblings on his back (Harry and his wife, Johanna, had eight children). “And the girls at the school where I worked would ride him, he was the quietest horse.”

Ron Davis, who made the film, said: “I didn’t believe in the Cinderella version. I thought it had been romanticised over 50 years — there was no way the horse really loved him.” But as he got into the project, he realised he’d been wrong. “I was really surprised that my cynical heart and mind was changed very quickly. When you start to know the story and hear it from lots of different people and see it through the lens as I did with all the archival footage, I then understood there was this bond between them and, more so initially, from Snowman to Harry. I had a different perspective as I learned the story.”

Davis grew up riding at A-rated events with showjumpers Mike Henaghan and Gary Zook. He dropped out of horse showing in his 20s to move to New York City to work in publishing and later in filmmaking. He also joined the Equestrian Aid Foundation which had been founded in 1996 by six-time Olympic dressage rider, Robert Dover. Initially, it focused on providing financial support to those battling HIV/AIDS but later broadened its mission to provide needs-based assistance for basic living and rehabilitation expenses to any equestrian suffering from a severe or life-threatening illness or injury. Davis was the organisation’s treasurer and promotional video maker.

Snowman and Harry competing at Madison Square Gardens in 1962. 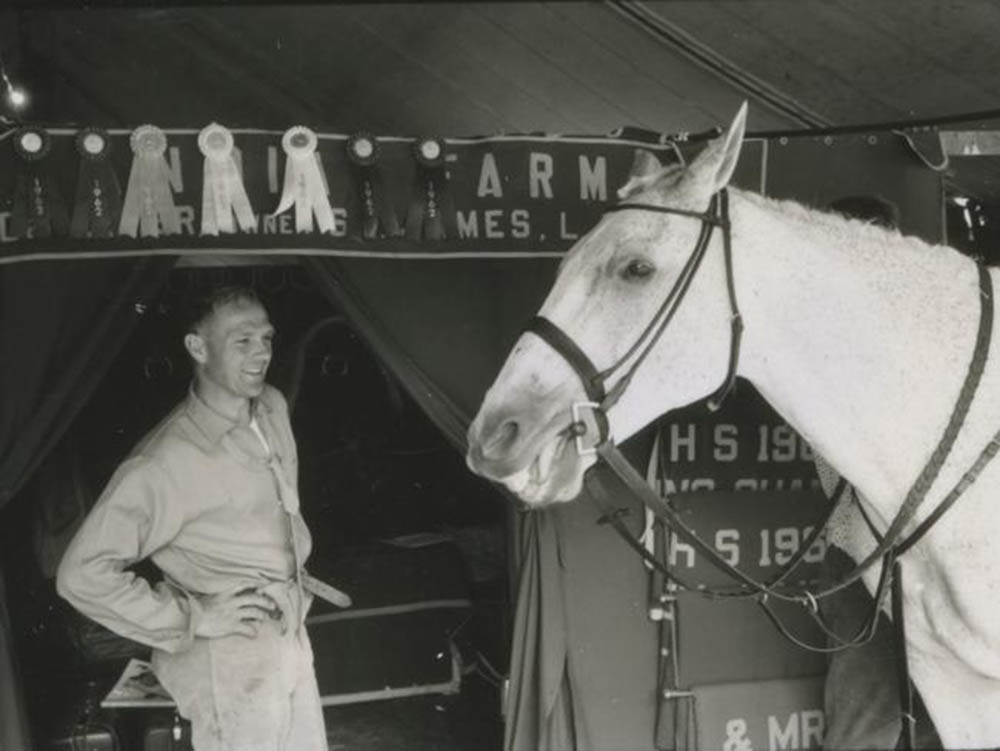 Harry and Snowman with some of their ribbons; note Snowman's rubber snaffle bit.

Snowman was loved by many and a was a true family horse. 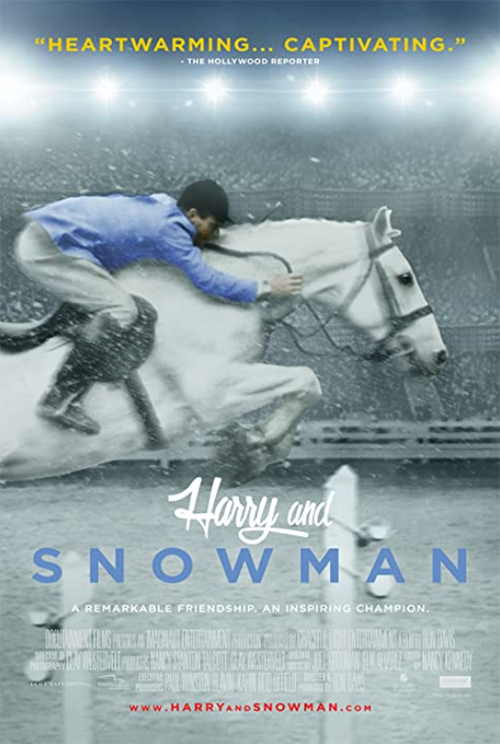 The 'Harry and Snowman' film poster. 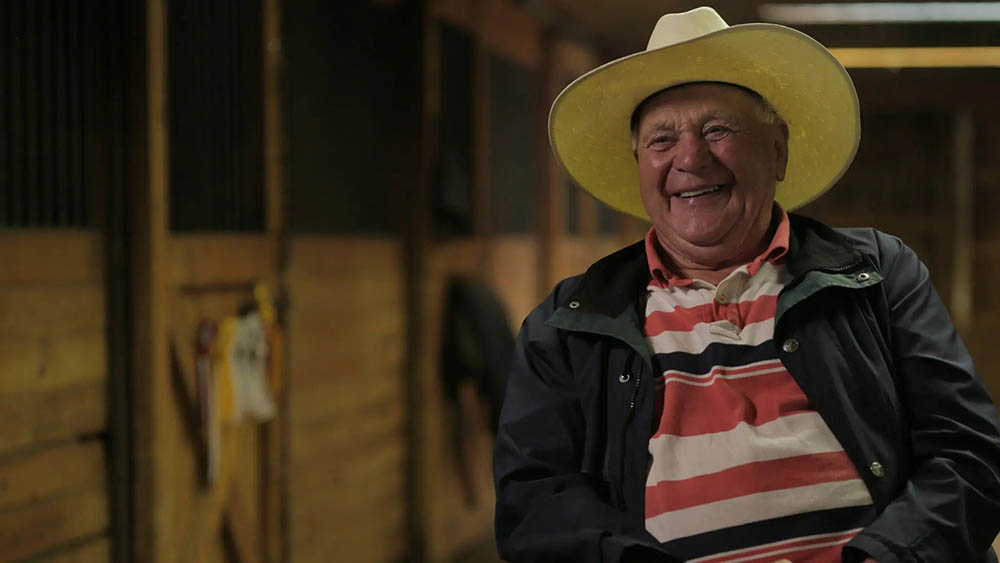 His documentary isn’t 80 minutes of sugar-coated sentimentality, it’s a warts-and-all coverage of a man with a somewhat obsessive, egotistical personality who persisted as a rider far past a conventional retirement age, earning him the title “The Galloping Grandfather’’. The New York Times once called him “the most flamboyant figure in a highly conservative sport, running and jumping his horses in heart-stopping unorthodox style and flinging his cap into the air— and often into the crowd — after clear rounds”.

When asked about his riding style, one very reminiscent of Australia’s Kevin Bacon, Harry pointed to a photograph: “This is of Snowman and me jumping 7’1” (215.9cm) at Fairfield and I didn’t use the reins at all. I only held on with my knees. It’s more athletic. The horse can jump better if he uses his head and neck for balance. I used loose reins and I only used a rubber snaffle bit with Snowman, and all my horses. I discovered rubber snaffle bits during the war.

“When I was young,” continued Harry, “I used to go to all the shows nearby and I watched every horse and rider. Dutch jumper Jan de Bruine had this forward style and he taught me. He won silver at the Berlin Olympics. He taught me to ride to reward the horse by not hanging on to his mouth and to be soft and forward. I was eight years old when I started taking lessons from him.

“After the war, I watched German rider, Hans Günter Winkler, in Antwerp and other places in Holland. He rode forward. He won Olympic gold in Stockholm on the great mare Halla. After the war, in Holland, I also saw the d’Inzeo brothers from the Italian cavalry jumping with a soft style and much more forward than the Germans.”

Harry’s unconventional style did not stop him from enjoying a fruitful equestrian career. After the Snowman era he went on to become one of the most successful riders and trainers in the States. He represented the USA at the World Championships in Sweden in 1983 and was recognised by the USEF with a Pegasus Medal of Honour in 2002 for his lifetime contribution to the sport.

Snowman retired at the deLeyer farm at St James, on the north shore of Long Island. In 1974, with Harry sitting close to him, he was euthanised at the age of 26 after suffering from complications of kidney failure. He was inducted into the Show Jumping Hall of Fame in 1992. Harry deLeyer died last year on June 25 aged 93 in a nursing home in Virginia. He is survived by five of his eight children, 15 grandchildren, two great-grandchildren, and a great-great-grandson.

In 2011 his kind, gentle horse was the subject of Elizabeth Letts’ book The Eighty Dollar Champion: Snowman, the Horse That Inspired a Nation, published by Random House. It became a No. 1 New York Times bestseller. EQ

The Snowman Rescue Fund supports the Omega Horse Rescue & Rehabilitation Centre at Airville, Pennsylvania, which gives other slaughter-bound horses the same chance that Snowman had to become a part of a loving family. Omega has placed more 1,200 horses since its foundation in 1997 and rescues slaughter-bound horses from the New Holland Auction, the same auction where Harry rescued Snowman.

The Harry & Snowman filmmaking team visited this site, as well as the barn of the kill buyer who had just purchased 25 horses to be sent to slaughter in Mexico and Canada. What they saw was unimaginable so that day they started the fund by rescuing three horses.

Next issue, Horses and Movies will cover a feature film and a most extraordinary commercial – Ridley Scott’s The Last Duel (2021) with Matt Damon, Jodie Cromer, Ben Affleck and Adam Driver, who also stars as the “horse boy” in a new Burberry ad.