The making of War Horse (2011) was similar to a major military manoeuvre. Challenges were many, the weather cold and wet. The Commander-in-Chief, aka Steven Spielberg, had an army of 5,800 extras and 300 horses and had to film his WW1 epic around the British countryside in just 63 days. 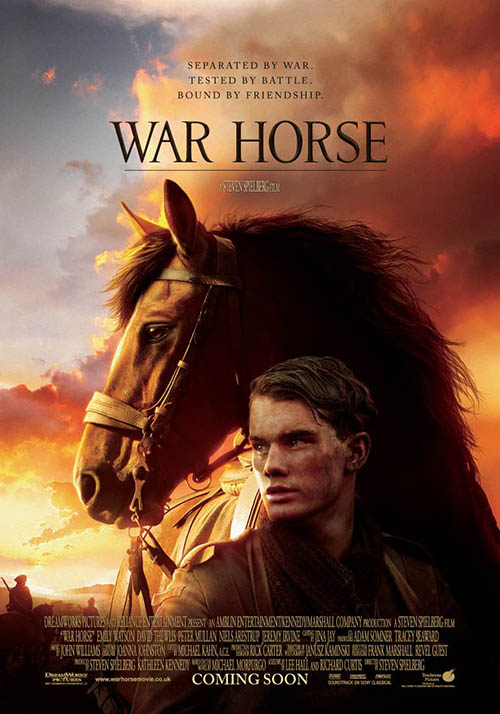 'War Horse' (2011), directed by Steven Spielberg.
Ride in any weather with Ariat

Steven Spielberg never does things in half-measures and found himself literally up to his neck in the making of War Horse. He fell into a deep hole filled with icy water.

“I was walking in a trench with my viewfinder and the crew following me, and all of a sudden I disappeared,” recalled the director. “It had been dug for explosive charges, and a storm had washed away the warning cones and filled it up. I threw my hands over my head and two big grips pulled me out.” But he soldiered on towards what turned out to be international victory. His film made over $177 million at the box office.

Originally War Horse was a children’s novel by Michael Morpurgo and published in 1982. It centred on Joey from his foaling through four years of war. During that time, he is enlisted by the British army, captured by Germans and hidden by French farmers, all the while being followed by Albert who raised him.

In 2007 it became a stage play featuring life-sized horse puppets created by the Handspring Puppet Company of South Africa, and in 2009 Spielberg’s DreamWorks Studios acquired the film rights. Experienced film-animal trainers came from near and far to provide and school horses and teach actors to ride. Zelie and Craig Bullen came from Australia, Bobby Lovgren and Bill Lawrence from the US, as well as other horsemen from the UK.

The film’s producer, Kathleen Kennedy, knew the ins and outs of working with equines from her involvement in 2003’s Seabscuit (Equestrian Life, December 2021). “Fourteen different horses in all played Joey in War Horse,” she said, “and one who was in many key scenes was Finder’s Key. We’d bought horses for Seabiscuit, then we sold them — and Bobby Lovgren, who’d collaborated with that film’s head trainer, Rusty Hendrickson, bought Finder, who turned out to be one of the best horses he’d ever worked with, so he flew the Thoroughbred gelding from Southern California to England.”

In the UK, Lovgren had his own team of trainers preparing the main horses – Joey (a bay) and his companion, Topthorn (black). There were always two horses on set to play each character. They knew what the action was and where to hit their mark. “When Topthorn’s being taken away to pull a cannon, he’s looking sad and his head’s down,” said Lovgren. “Horses don’t normally do that, but I can teach them to travel that way, or even walk with a limp when I put a weighted shoe on one of their feet.”

In the scene where Joey has to walk over to the body of his friend, Topthorn, played by a stunt horse named George, Spielberg called for absolute silence on set. Without any fuss the two horses calmly enacted the emotional sequence. The crew didn’t utter a sound – they were all in tears!

It was the role of Lovgren’s American colleague, Bill Lawrence, to train the actors how to interact with the animals. Unfortunately, he was injured on set when one of the main rearing horses “drilled me with both front feet. I got struck in the chest, he’d been too wound up for a scene; it took me quite a few weeks to heal up.”

Some of the actors who were strangers to the saddle were also stiff and sore from daily riding lessons. Jeremy Irvine, who played Albert Narracott, the film’s leading character, was a newcomer on many levels. (Before auditioning for Spielberg he’d been playing a tree in a Royal Shakespeare Company play). 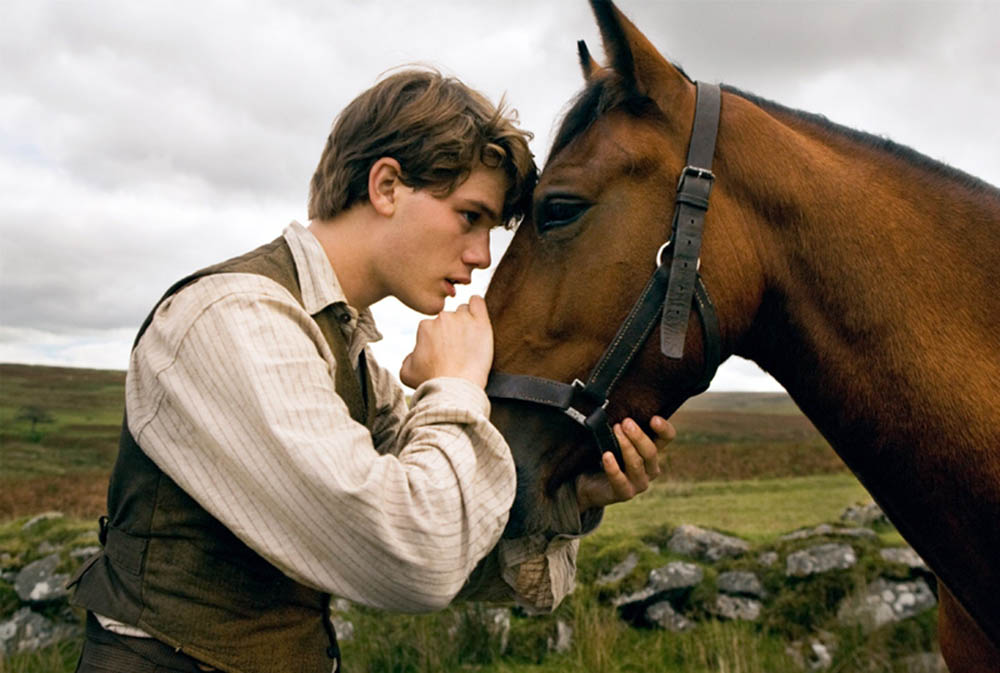 Jeremy Irvine, who played lead character Albert Narracott, pictured here with one of the horses that played Joey. 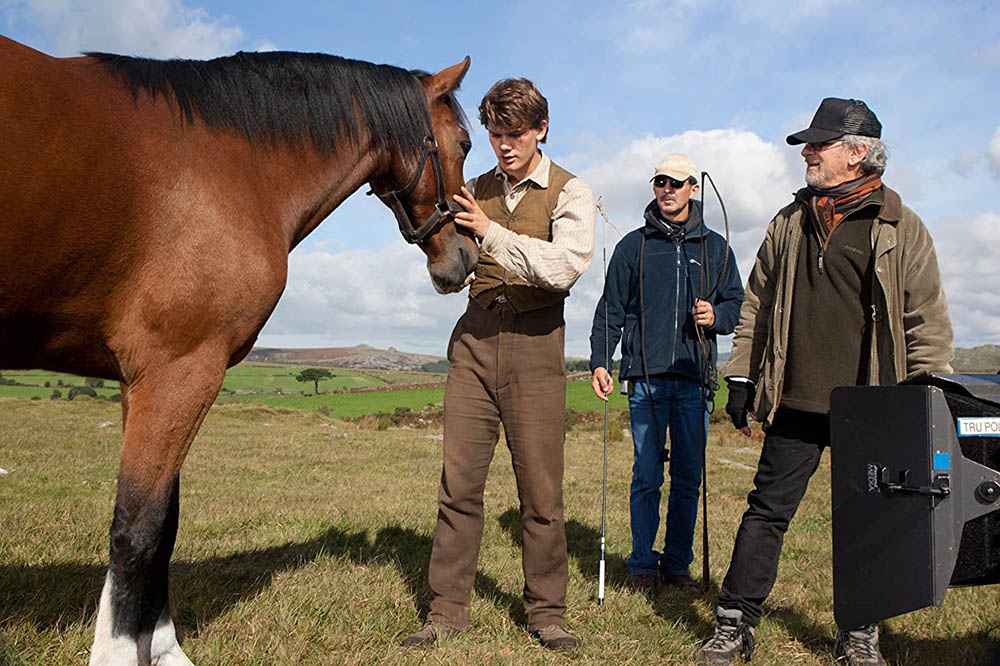 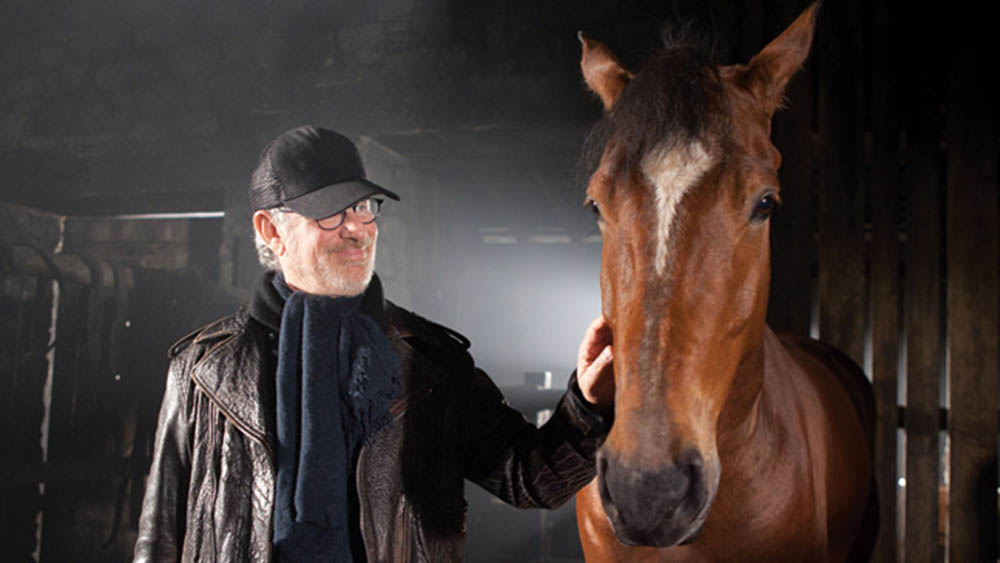 Steven Spielberg on set with a horse.

“From day one we had to learn
to ride one-handed.”

“I’d never been on a horse, and there was also another small problem, I’d never been in a movie, either! There was a huge amount I had to learn. Riding’s very uncomfortable at first, especially for guys. There’s a reason why John Wayne walked like he did, you know. We all waddled around like ducks for a while, but we had a lot of fun.” And according to co-star Benedict Cumberbatch, who played an army major, the young actor learned quickly.

“He did it effortlessly,” observed Cumberbatch, who also had little riding experience prior to War Horse. “I maybe had several lessons when I was a kid. It was one of those things – like tap dancing, which are considered useful for children. I think it was just another activity which might have stopped me getting into trouble. I was very bad at it and would slide off the ponies’ necks when they grazed!” But he got it all together before the cameras rolled.

Tom Hiddleston had the time of his life as a cavalry officer who rides into battle on Joey, played by an Andalusian named Sueno. “I have to say the feeling of galloping at full tilt with the wind at your back is one of the greatest pleasures life can offer.” The horse work was also challenging as he had to hold a weapon as well as the reins.

“Working with swords requires a lot of precision, practice and discipline and from day one we had to learn to ride one-handed,” he recalled. “There can also be problems when delivering emotional lines from the saddle. Horses break wind whenever they feel like it, which tends to detract from the seriousness of your speech! Also, the director should never yell ‘action!’ as experienced film horses recognise the word and often get very excited.”

For the charge, 100 mounts were assembled. “Many belonged to the riders playing the soldiers so they’d obey their commands,” explained Spielberg, who had a special effects supervisor build several full-sized animatronic horses to use in close-ups.

This confrontation, where British cavalry is met with German machine guns, was filmed in Hampshire on the grounds of Stratfield Saye, one-time home of the Duke of Wellington. The stables there contain the grave of the Duke’s famous war horse, Copenhagen, who he rode at the Battle of Waterloo. During the stallion’s retirement he enjoyed treats of Bath buns and sponge cakes. A 15hh TB with a sprinkling of Arabian blood, he died at the age of 28. 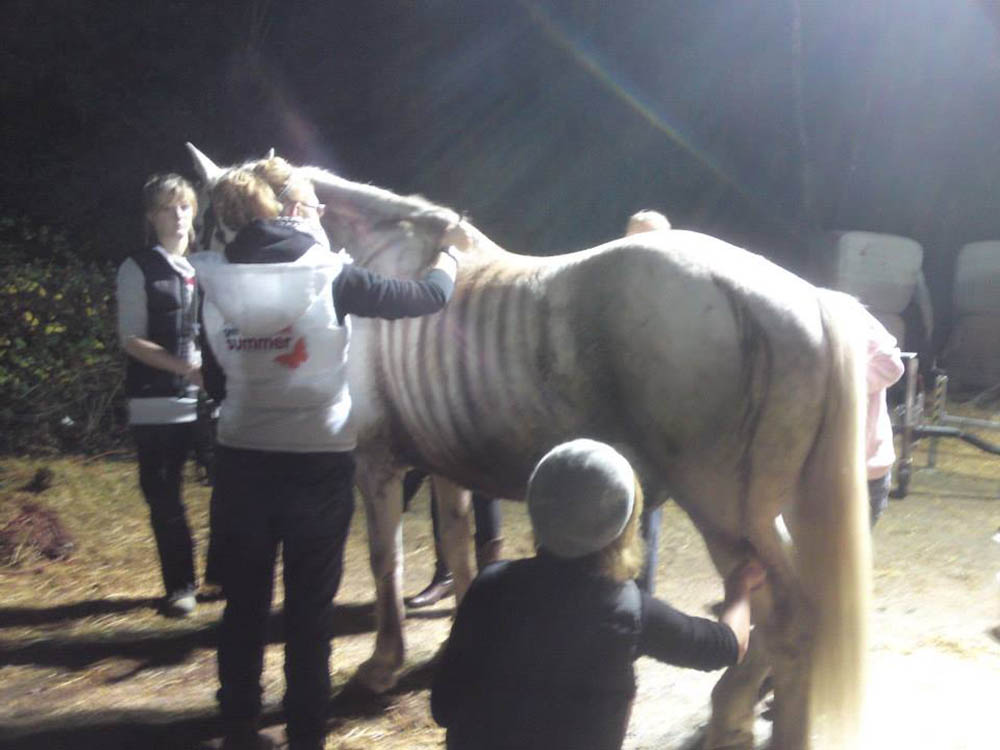 Making a horse look thin; Charlotte Rogers was in charge of equine hair and make up. 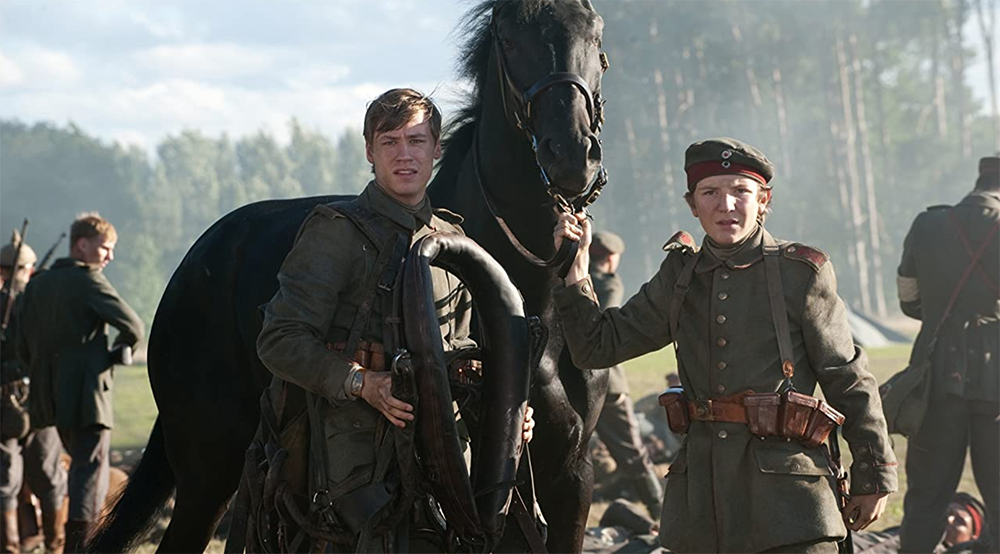 Copenhagen bore no resemblance to any of the movie’s Joeys. Jeremy Irvine’s main riding horse and the “Joey” featured in the film’s sunset poster was Civilon, a heavy-built Andalusian from Spain who looked more like a war horse than many of the other doubles. His docile temperament also made him easier for the actor to ride. Sueno, Civilon, and another Spanish horse named Roger, were also used in the gruelling scenes where Joey had to prove his worth by ploughing a field.

Another riding double was Abraham, an English Warmblood liberty horse trained by Zelie Bullen. He also did close-up work with Irvine where Joey is nuzzling or listening to his master.

At first, Abraham was aloof but the Australian animal trainer fell in love with him during her time on set. “He was very untrusting to begin with. He seemed outwardly confident but really wasn’t. He was cheeky, independent and had a lot of personality. There was a fine line I had to walk as a trainer.” She was told at the end of filming she could take Abraham home, but it didn’t happen as his owner reneged on the deal. “I will always miss that horse,” she said.

Abraham was one of the 14 Joeys to be made up with four white socks, a white star and snip. It took 45 minutes to prepare each horse. “The job taught me a lot of patience,” declared Charlotte Rogers, the film’s equine hair and make-up supervisor. 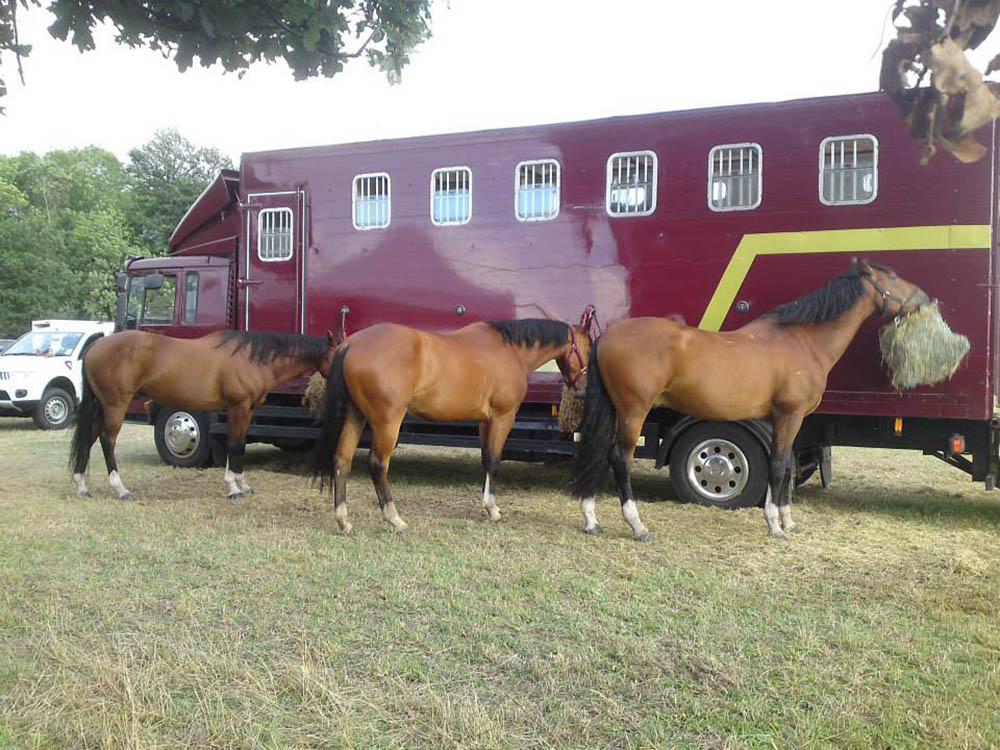 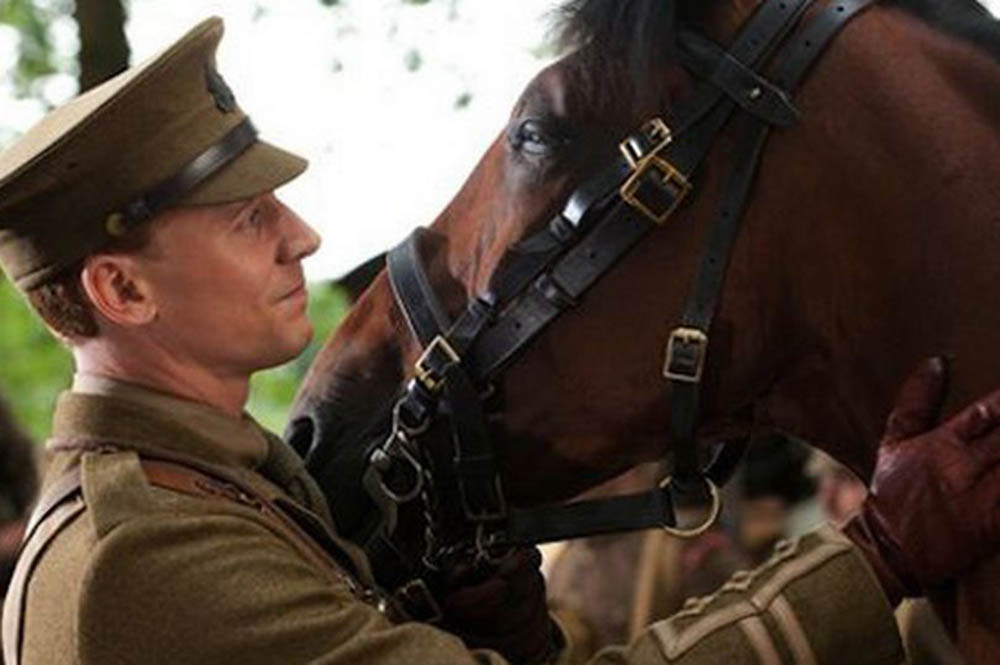 Tom Hiddleston had the time of his life as a cavalry officer who rides into battle on Joey, played by an Andalusian named Sueno.

The dead horses on the battlefield were made from foam rubber — and unfortunately, there was a tendency for them to become airborne during strong winds.

Ali Bannister, the equine artistic adviser, observed how everyone involved grew fond of the animals. “A number of the crew who weren’t initially interested in horses finished the film with a desire to be around them more. I’d often catch actor, Robert Emms, talking softly to the horses and stroking them gently between takes, which was lovely to see.” Emms, who had played the lead in the stage play was cast as David Lyons in the movie.

The making of the film required patience from everyone and sometimes Spielberg would be difficult and impatient, but he was always respectful of the horses. “It was done safely with great trainers who were five-and-a-half feet away at all times,” he said, “and also on set was Barbara Carr, from the Humane Society.

“The trainers and Barbara gave me the schedule for the horses, and told me which ones could work, and for how long,” Spielberg recalled. “And when it came time to rest the horse, they didn’t care that I hadn’t finished a take, or that I wasn’t satisfied with the ones I was getting. It was just time for that horse to be pulled, and I accepted that without complaint.”

New Zealand director, Peter Jackson, collects war memorabilia. According to Spielberg: “He pretty much lent us his entire World War 1 collection in three cargo containers which he sent to the UK free of charge. He also has 15 working biplanes, which we didn’t need.”

REVIEW “It is Spielberg’s homage, I believe, to Ford and to a Hollywood tradition of broad, uplifting movies intended for all audiences. The performances and production values throughout the film honour that tradition. War Horse is bold, not afraid of sentiment and lets out all the stops in magnificently staged action sequences. Its characters are clearly defined and strongly played by charismatic actors. Its message is a universal one, about the horror of war in which men and animals suffer and die, but for the animals there is no reason: They have cast their lot with men who have betrayed them.”

War Horse is available on DVD, Blu-ray and to download.