Tatum O’Neil was a fast learner on horseback, ensuring she looked genuine in her starring role aboard a real-life Olympic eventing champion in MGM’s 1978 production of International Velvet. 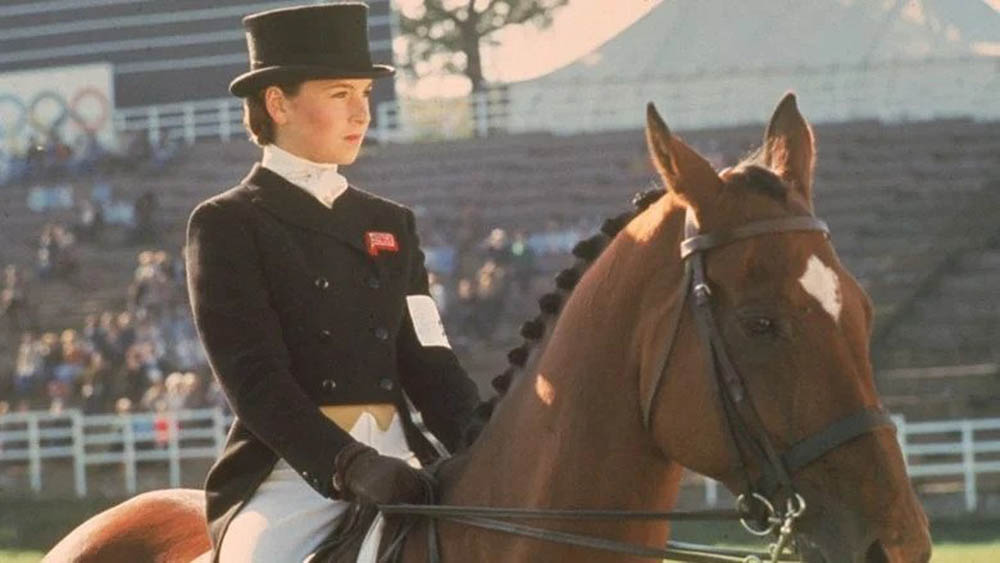 During pre-production, Tatum O’Neil worked hard on acquiring a British accent and even harder learning how to ride. All she had ever done before was trot around the hills of Southern California in a western saddle.

In Los Angeles she underwent intensive training with Marcia Williams, a member of the USEF National Show Jumping Hall of Fame who had previous film experience coordinating the riding sequences for The Horse in the Grey Flannel Suit and The Horse with the Flying Tail.

Marcia was impressed with her pupil’s abilities, describing Tatum as a very fast learner. “In just two months she was jumping a course of three-foot fences which many new riders take four of five months to learn.”

Tatum was also proud of her achievements and wished she had continued with riding. “I had to do big jumps, and that was very hard and scary, but I was very confident,” she would later recall. “I never got thrown off the horse. I loved riding. I think I should have kept doing it. I would have had a much better life.”

However, Tatum went in a few other directions. She severed relationships with her father, Ryan, accusing him of physical and mental abuse. Married John McEnroe, had three children, divorced eight years later. Developed an addiction to heroin, lost custody of her children, attempted suicide, was arrested for having crack cocaine and is lucky to be alive today at the age of 58.

In this sequel to National Velvet, the 1944 classic starring Elizabeth Taylor as Velvet Brown (see Equestrian Life, September 2020), Tatum plays her orphaned niece, Sarah, who dreams of Olympic glory with the British eventing team on her horse, Arizona Pie. There is also a romantic element to International Velvet where Sarah falls for an eventer from the US Equestrian Team. In the original 1944 version, young Velvet’s ambition was to win the Grand National Steeplechase, and no romance was depicted up on screen. Although Hollywood gossip suggested there was a whole lot of it going on between Taylor and Rooney in the dressing room. 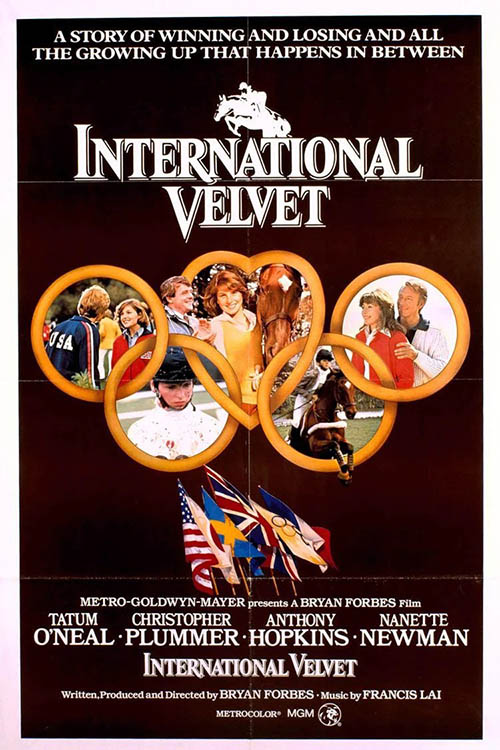 The film poster for 'International Velvet'.

“It was just like a grown-up
Pony Club camp
.”

The 1978 version was directed by Englishman Bryan Forbes and starred his wife, Nanette Newman – famous in Britain as the face of Fairy liquid detergent – Christopher Plummer, Anthony Hopkins, and a 13-year-old Tatum who had won an Oscar for Paper Moon three years earlier.

It wasn’t Forbes’s greatest cinematic triumph, although he endeavoured to ensure his film’s equestrian sequences were authentic and his juvenile lead convincing. “In my film Tatum goes from 12 to 18,” recalled Forbes. “In real life she had the all-knowing eyes of someone who’d seen it all – and as the daughter of Ryan O’Neal she probably had! My problem wasn’t making her look and act 18, it was making her a believable 12-year-old.”

During production in the UK Tatum was schooled by four Olympians headed by American Bill Steinkraus, who also served as the film’s technical consultant, with Major Laurence Rook, Richard Meade and Mary Gordon-Watson from Great Britain.

As a result of all this intense tuition Tatum was able to do an admirable amount of riding herself on screen, with eventing world champion Ginny Leng doubling when required. Other British eventers secured roles, such as Jane Holderness Roddam, Alistair Martin-Bird, and Julian Seaman, who was Badminton’s media director. “Many of the cross-country scenes were filmed at Burghley right after the 1977 European championships,” he explained. “It was just like a grown-up Pony Club camp; we’d play ‘chase-me-Charlie’ over the fences every morning – it was a hoot!”

Other cast members were not as enamoured with the film as Mr Seaman, who only retired from Badminton in 2020. Anthony Hopkins, who played the pompous British chef d’equipe, Captain Johnson, declared on the Johnny Carson Show: “I’ve done a lot of great movies. International Velvet was not one of them.” 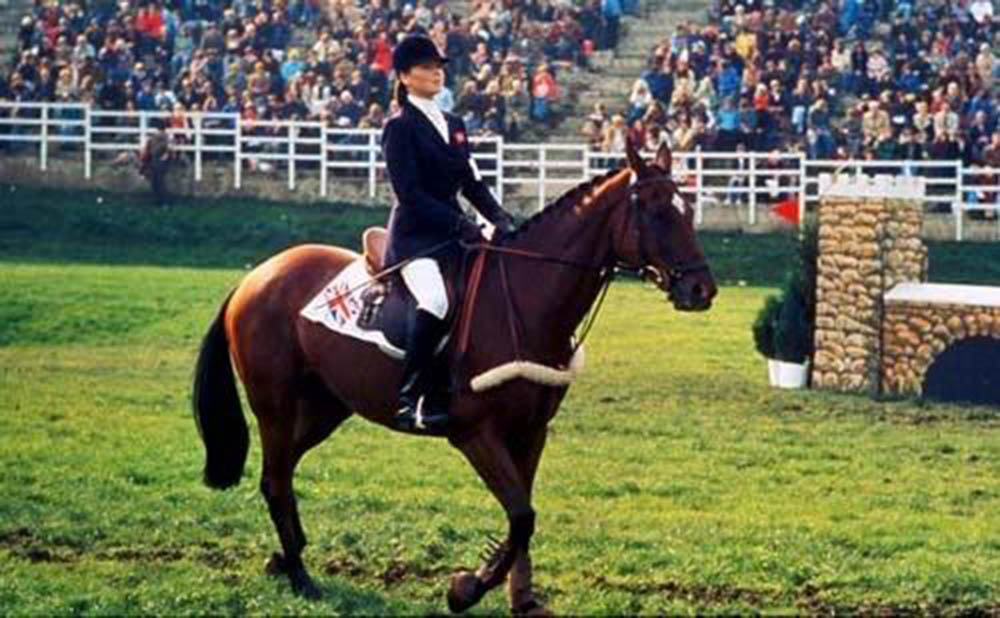 'International Velvet' is focused on eventing.

‘WHERE DID YOU LEARN TO RIDE?’

However, several critics felt he had some of the best lines, especially during the training sequences, such as: “We wouldn’t exactly call that riding, would we? Staying on a horse, perhaps. Where did you learn to ride? Oh yes, in the colonies. Well, that explains it. You realise, of course, that they don’t allow cowboys in the Olympics?”

“Some of you may have come here with the impression that dressage is frightfully boring compared to the greater glories of the cross-country event. That’s because you all lack sophistication, amongst other things.”

“The cross-country event is considered by some, Miss Brown, to be an opportunity to display carefree abandon. This is a mistake for which I would cheerfully reintroduce capital punishment. This is a test of brains. And since horses are only marginally less stupid than some of the people who ride them, an observation which carries with it the experience of a lifetime, I would urge you not to sit on your brains, but to use them.”

“Dressage in pouring rain is like dancing Swan Lake in clogs in a bog. The greater glory of the sport was somewhat obscured from view that day.” 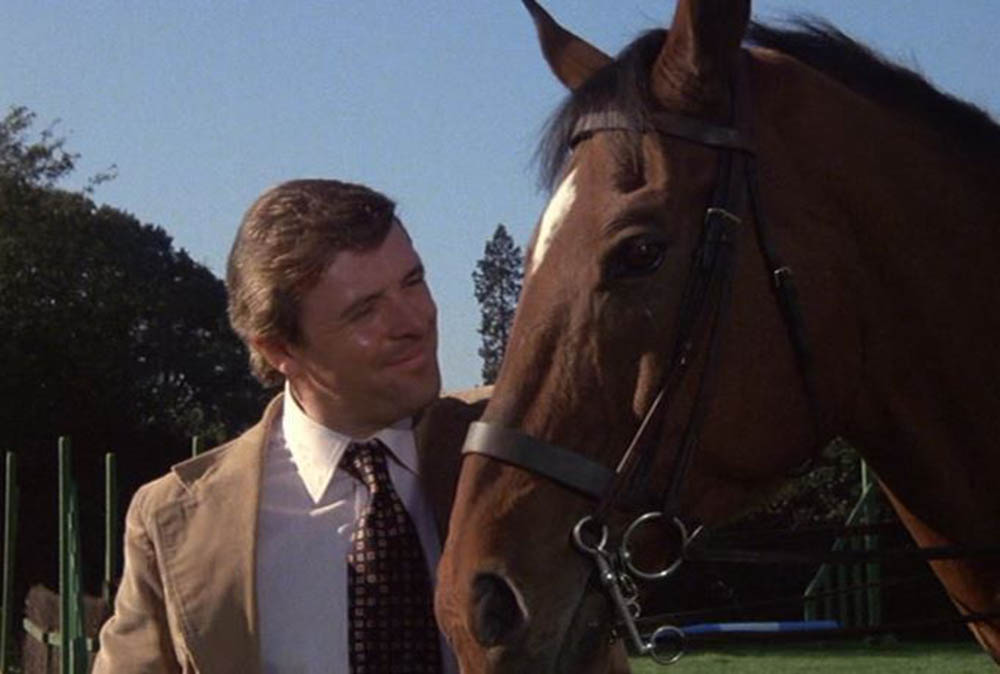 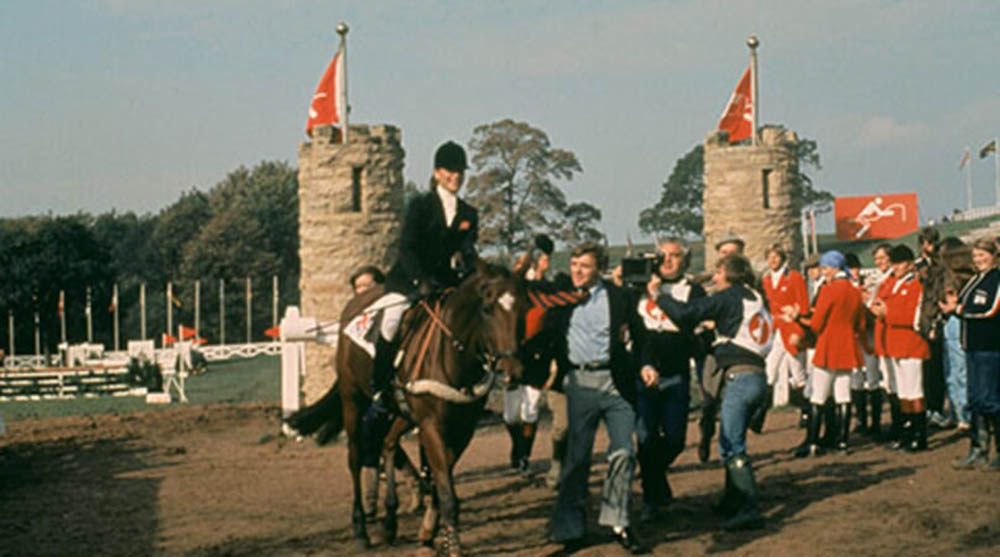 Thoroughbred Cornishman V did much of the leg work, as well as the close ups.

Much of the film was shot in South Devon on the Flete Estate, and on the Mothecombe sands nearby. Residents say that 40 years later families are still bringing their horses to recreate the galloping scenes along the beach.

And the horse doing much of the legwork, as well as the close-ups, was the true star of the film. Cornishman V never complained, did what he was told and got on with the job – he was probably the most decorated and nicest performer on the picture. He was also decorated with a fake white star.

The 17hh thoroughbred, by Golden Surprise out of Polly IV, was formerly a hunter belonging to Mary Gordon Watson’s father. The big bay was first evented by Richard Meade, winning team gold in 1968, and then by Mary, again winning Olympic gold in 1972. He also claimed numerous World and European titles.

After retiring he went into the film business appearing in Tony Richardson’s Dead Cert in 1974 starring Judi Dench, based on a Dick Francis novel. (The horse-master was the author’s son, Merrick Francis). When the horse jumps over a car he was ridden by Lord John Oaksey, a former steeplechase jockey and much-loved British aristocrat. He died, aged 83, in 2012. 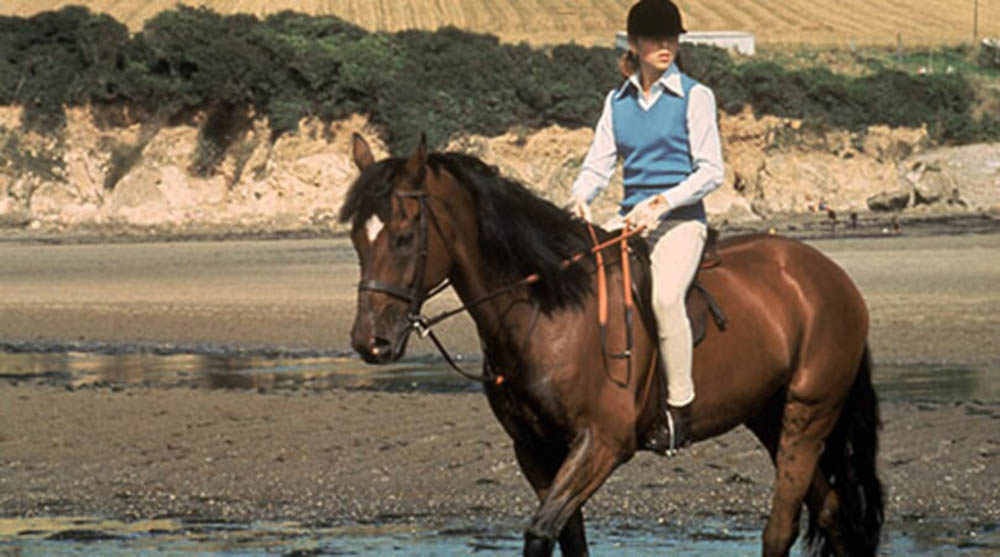 Tatum and Cornishman V; forty years later families are still bringing their horses to recreate the galloping scenes along the beach from 'International Velvet'.

In the final cut of International Velvet there is much use of actual eventing footage, which is the highlight of the film. A lot of this action was from the Ledyard Farm Horse Trials in Hamilton, Massachusetts, where riders like Tad Coffin, Bruce Davidson and Michael Plumb were competing in 1977.

When Forbes’s 60-member crew arrived on the scene there was little interest shown by riders or the somewhat snooty spectators. “Horse people here don’t go gaga over movie stars,” Steinkraus had explained to the director. “They’re not brought up to behave like that.”

Most of the filming took place in blinding rain, which deterred neither contestants nor onlookers, who stood stoically in the mud – although a few briefly glanced at Ryan O’Neal when he arrived to visit his daughter.

One of the poncey members of the nearby hunt club later said to Forbes, “You movie people are really quite nice,” to which he replied: “I have a home, you know, and I don’t kick the furniture to pieces.” He later added that he felt horse people were another race. “They talk of nothing else – like golfers.”

Michael Plumb, with two horses, took out first and second place, while the best woman rider, Lucinda Prior-Palmer, was presented with the International Velvet trophy by Tatum. The crew then flew back to England.

It would be safe to say that this somewhat sentimental film comes alive with the competition footage; and the heroine and Cornishman V do a good job – but 127 minutes is too long, and there is far too much narration. 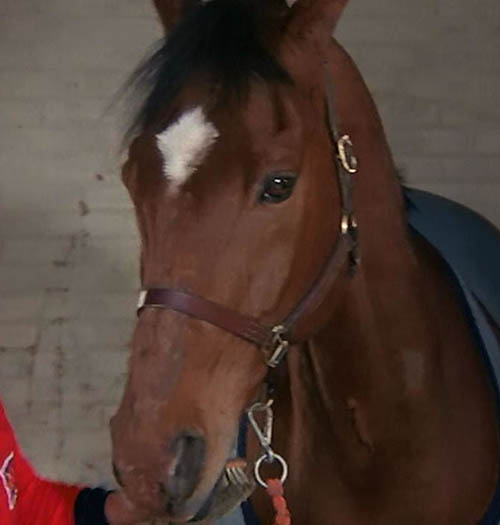 Prior to shooting the film, all Tatum O'Neal had done riding-wise was trot around the hills of Southern California in a western saddle!

“International Velvet is a racking experience for any reasonably self-possessed adult, continuously pulling the viewer between a sneer and a tear. It exploits without shame, wit or subtlety our sympathy for misunderstood children, for animals, for pluck, progress, perseverance and, especially, for against-all-odds success. The photography is so lyrical you may feel airsick by the end, while the soundtrack score by Francis Lai should be labelled with a skull and crossbones.

“After listening to this music for more than two hours, you get an idea of what it would have been like to be in Pompeii that fatal day had Vesuvius been full of butterscotch instead of lava. Yet this film has more than its share of moments, almost all of them centring on the performance of the eerily talented, immensely appealing Tatum O’Neal. She is unique – the movie is something else. As domestic drama it is facetious and coy, and just about unbearable.

“However, the steeplechase sequences are superb and the film has a first-class performance by Anthony Hopkins as the tough, no-nonsense trainer. Mr Hopkins is an actor of such crisp intelligence that he seems to be in a movie completely removed from the sentimental romantic drama inhabited by Miss Newman and Mr Plummer.”

International Velvet may be viewed by renting or purchasing on iTunes, Google Play, Vudu, and Amazon Instant Video. EQ