SHENAE & BOLD VENTURE TAKE IT UP A NOTCH

FOR TANJA, IT’S ALL IN THE MINDSET

INSIDE ‘THE HORSE WHISPERER’

GETTING ON THE BIT

CHEDINGTON & THE BURTONS A PERFECT MATCH

THE LANGUAGE OF DRESSAGE:
STRAIGHTNESS

NCHA FUTURITY BACK WITH A BANG

WHAT CONSTITUTES AN EMERGENCY?

WHY YOU SHOULD PREPARE FOR SPRING IN WINTER

The Horse Whisperer was such a phenomenon that it not only consolidated Robert Redford’s stardom and catapulted Scarlett Johansson’s career, the very word “whisperer” came to be applied to anyone with a strong affinity for a particular animal or being. 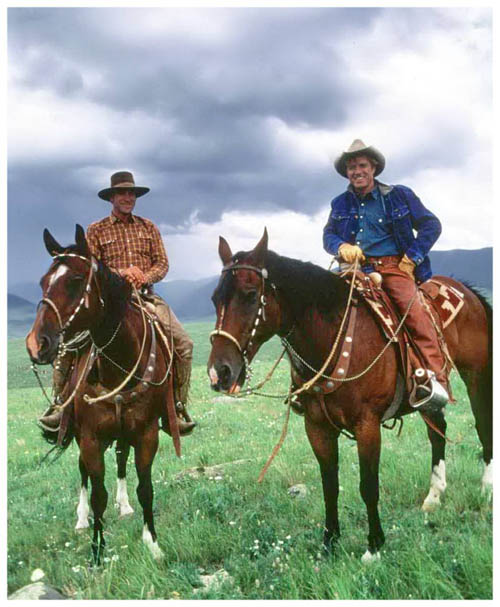 Buck Brannaman and Robert Redford on set for 'The Horse Whisperer'.
Click here to learn more about Safeguard EQ.

Directed by and starring Robert Redford, The Horse Whisperer (Touchstone Pictures 1998) is based on Nicholas Evans’ bestseller. In 1995 Redford bought the rights to the book before it was published and turned it into a hit movie making $187 million at the box office.

Englishman Evans, who had studied law at Oxford, was a journalist, scriptwriter and TV producer. He was encouraged to try his hand at fiction by director David Lean (Lawrence of Arabia, Dr Zhivago) about whom he was making a documentary. In 1993 he met a blacksmith in the far south-west of England who told him about horse whisperers – Evans went to work on his first novel.

While researching, he spent weeks in America learning from three exponents of natural horsemanship – Ray Hunt, Tom Dorrance and Buck Brannaman. He said later: “The one who truly inspired me was Buck. His skill, understanding and gentle, loving heart have parted the clouds for countless troubled creatures. He’s the Zen master of the horse world.” Redford used this inspirational horseman as his film’s equine adviser.

Buck himself would later play down being lauded as a “horse whisperer”. He said: “Because of the popularity of the book and the film, it’s hard to find someone who isn’t a horse whisperer. I’m not offended by the term, but the way I see it, if I went around telling people that’s what I was, I’d be a phony anyway. So I’ll leave the labels to everyone else. I don’t think I need that.”

The plot of the movie, which differs slightly to the book, is about gifted trainer Tom Booker, played, of course, by Redford who, through a unique process, rehabilitates a disturbed, traumatised horse. His services are enlisted by Annie (Kristin Scott Thomas) whose daughter Grace (Scarlett Johansson) has been involved in a tragic accident on “Pilgrim”, leaving both rider and her horse physically and mentally damaged.

The horses that were not fake were provided by renowned trainer Rex Peterson. His chestnut quarter horse, Hightower, was the lead with four different doubles playing Pilgrim during various phases of his healing process. Peterson’s black QH stallion Doc’s Keepin’ Time (aka “Justin”) was “Gulliver”, who was killed in the accident. Brannaman supplied his thoroughbred gelding Kentucky Pet to be the gentle “Pilgrim” and his QH Rambo Ronan was Redford’s mount. (For more about this horseman have a look at Buck, a 2011 documentary where Redford describes him as “the real deal”. 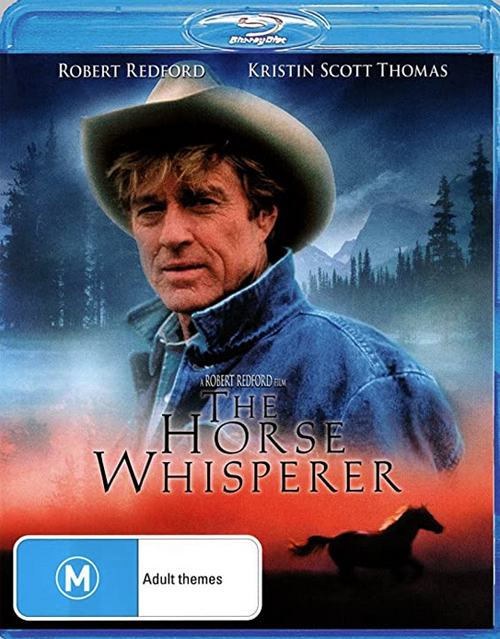 The old VHS cover for 'The Horse Whisperer'. 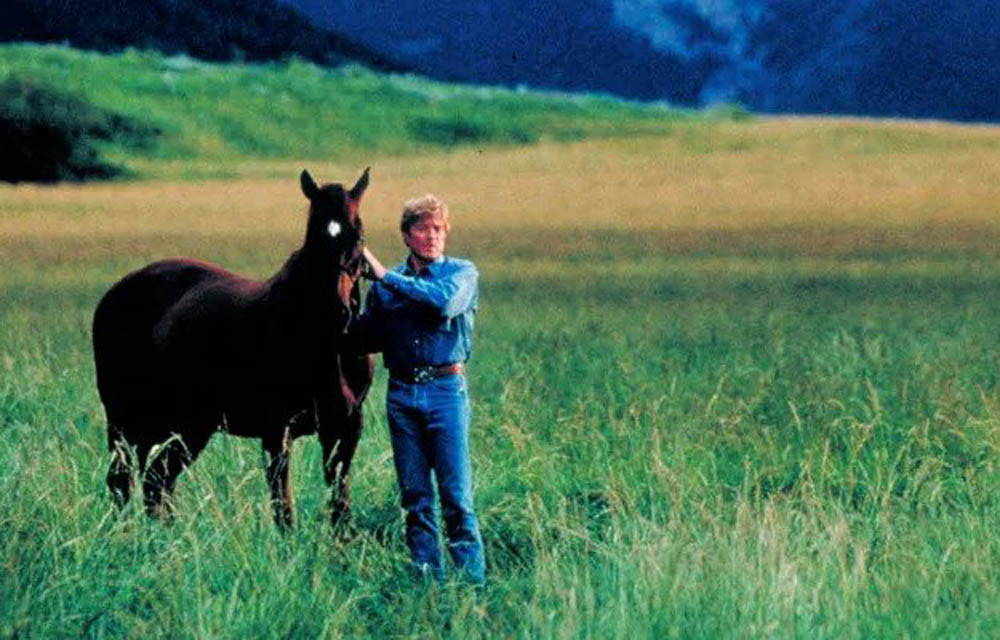 Justin, who played Gulliver, featured in a Procol Harum music video The Truth Won’t Fade Away, where he was completely buried then burst out of the ground. Trainer Peterson never revealed how it was done.

Much of what you think you’re witnessing in the accident sequences is an illusion. The teenagers are out one winter’s morning, Grace (Johansson) on Pilgrim and Judith (Kate Bosworth) on Gulliver. As they ride up an icy slope, Gulliver slips and hits Pilgrim, both horses fall dragging the girls on to a road and are hit by an eighteen-wheeler semi-trailer. Judith and Gulliver are killed, while Grace and Pilgrim are both severely injured.

Julia Roberts fell in love with Hightower when she rode him in Runaway Bride in 1999.

What really happened was that stunt doubles rode animatronic horses down a specially constructed slide. In the early scenes where Gulliver is sprawled on the highway, a mechanical horse was used, and later Justin was brought in to lie down and wait for his trainer’s signal. It was a specially warmed-up road softened with a white rug placed over sand and very lightly covered in snow. When the wind machines started, he then got up on cue and dragged his rider, stuntwoman Shelley Boyle, Peterson’s sister, across the road.

“During the accident Pilgrim gets big gashes on his nose, in his chest and all over his body,” explains Dennis. “We started by taking big plaster impressions of the horse, and then we built some prosthetic pieces with the simulated gashes in them which we fitted onto the horse. We made several pieces to show the various stages of healing. The additional challenge was that we had to create them for as many as six horses, because different ones were trained to do different stunts.” 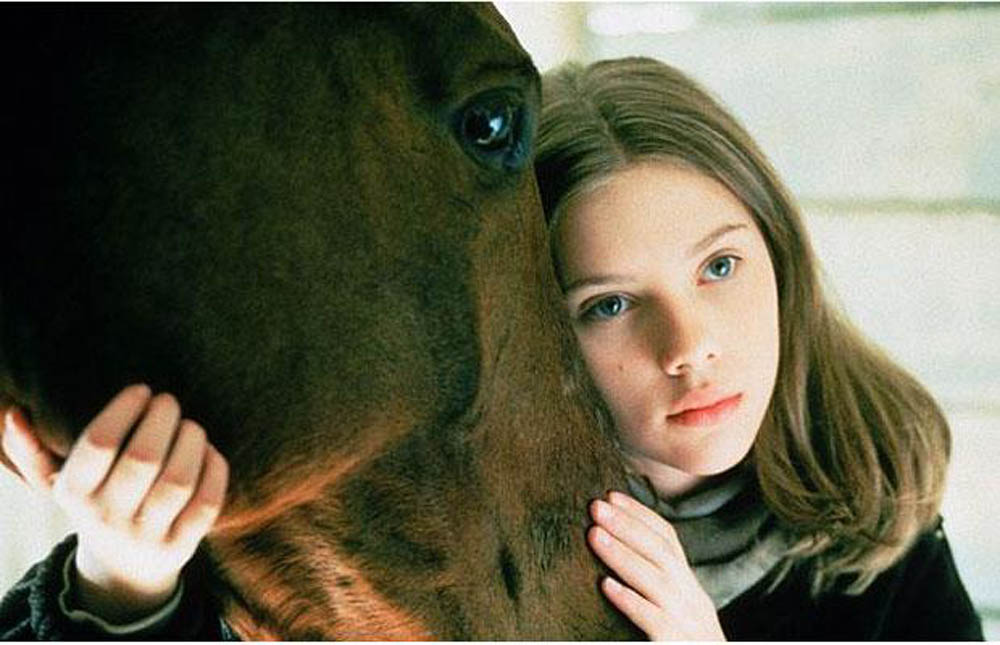 Scarlett Johansson was just 13 when she played Grace in 'The Horse Whisperer'. 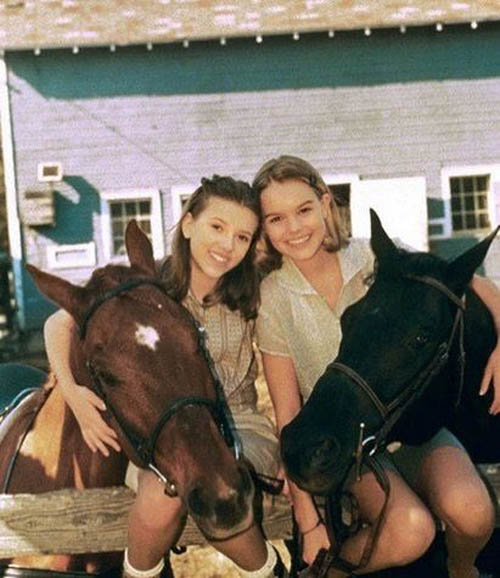 In a branding scene, a calf was lightly flanked and a loose rope placed around its feet. Prior to filming, the hair on the calf’s hip was clipped to form a “Double Divide” pattern giving the simulated appearance of a brand. The calf was placed over a small hole in the ground and, at the precise time that the cold branding iron was placed on the hip, a burst of cool steam was released from the hole to make it appear as if the flesh had been seared.

The Liddiards also created the prosthetics for Scarlett Johansson, whose character Grace loses part of her leg in the accident. They took impressions of the leg and built a shell to fit over it. In preparation for her role she had met with real amputees and been amazed at their versatility. She also had to learn to ride. “I was very unsure of myself,” admitted Johansson, who was only 13 when she made the picture. “Then after taking many lessons and working with the wranglers, I became obsessed with it.”

Inevitably, though, there were criticisms of The Horse Whisperer written by cynical journalists, and there was controversy about some of the training methods used to heal Pilgrim, who had become distressed and dangerous as a result of the accident.

The final cut contained several training no-no’s including Redford wearing a large ring while interacting with the horse – a sure way to lose a finger. And an American practitioner of natural horsemanship, John Lyons, noted that while there were many positive messages, there was also the potential for people to get some dangerous messages about horse training from certain sequences. He first noted that the multiple horses playing Pilgrim were all well-trained animals and that the movie did not represent a real-life timeframe for training a single real-life animal. He pointed out that the film made the rehabilitation of the horse appear to be a one-session event, when it actually would have taken considerable time for such a change to occur. 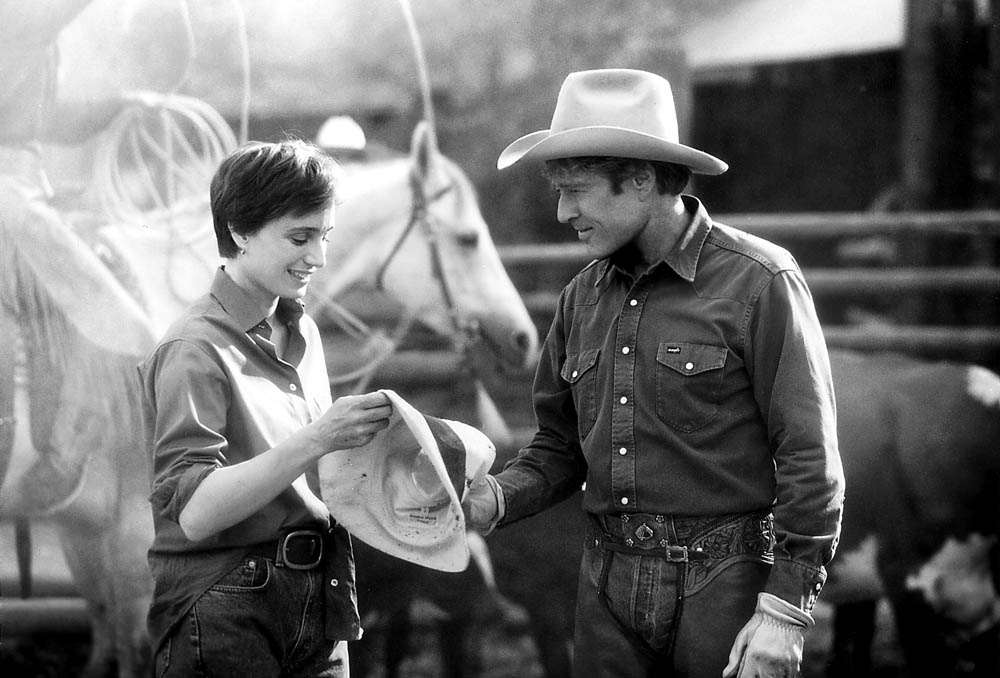 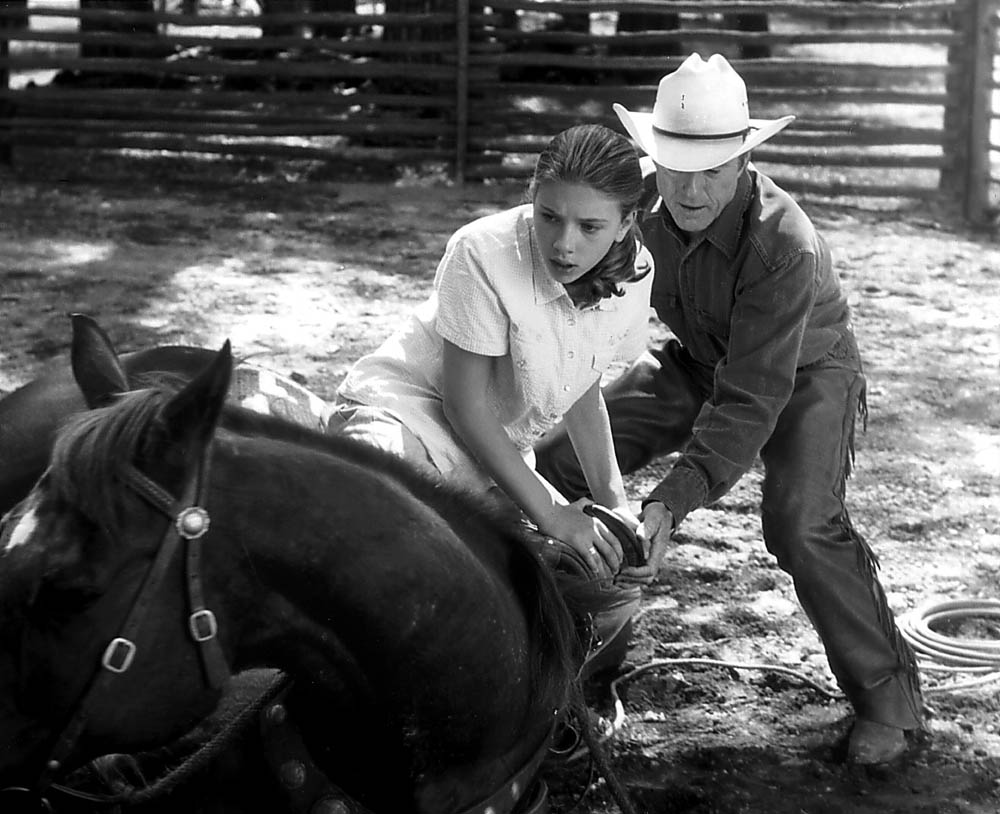 The scene where Booker hobbles, ropes, and lays the exhausted horse on the ground, then has Grace get on the recumbent horse, was somewhat controversial. 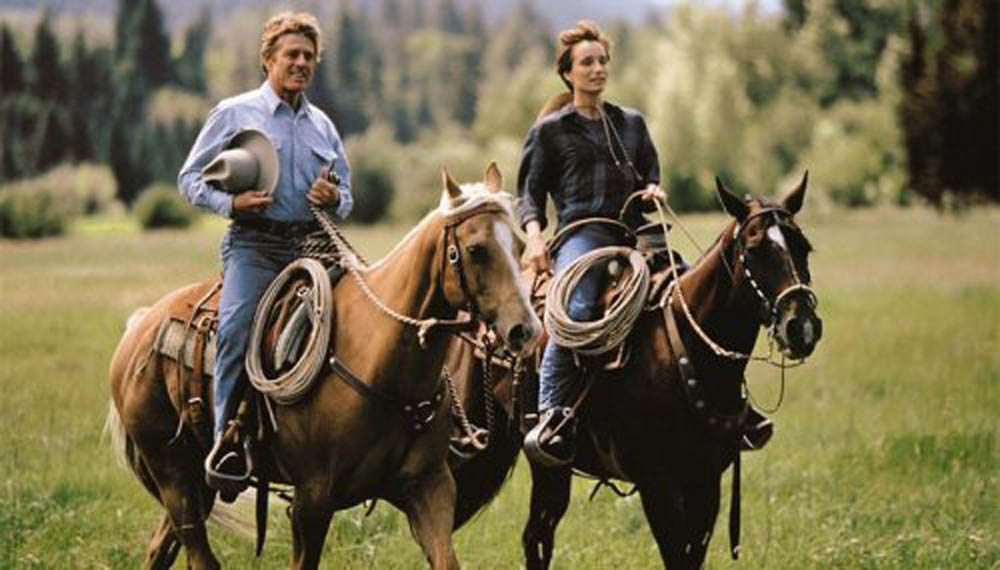 Robert Redford and Kristin Scott Thomas in the saddle.

Lyons criticised a number of dangerous practices shown in the movie and was particularly critical of the scene where Booker hobbles, ropes, and lays the exhausted horse on the ground, then has Grace get on the recumbent horse. It is allowed to rise, and the horse and girl are miraculously cured of their fears and are a team once again. He argued that the risk of injury to horse and human when using such a method was considerable, that a horse driven to exhaustion is not “trained” and pushing a fearful rider in such a fashion is ill-advised. However, the natural horseman also recognised the limitations of Hollywood filmmaking, stating: “In order to tell a story, things are often done that would be imprudent for horse owners to attempt.”

But never let facts get in the way of a good story. The general public loved the movie and still do. It is out on Blu-ray and DVD and can be viewed on various streaming services around the world.

THE OTHER ‘HORSE WHISPERER’

Made a few years ago, this is a short film about Jean François Pignon, who was captivated as a teenager by a white horse named Gazelle. He recounts the incredibly strong bond he formed with the mare and how he began to develop an extraordinary ability to communicate with her and other horses. We learn of his brave response to the tragedy of her loss, how he developed his connection with other horses and went on to create unique equestrian performances. It runs for about five minutes, unlike its namesake which goes for almost three hours! The Horse Whisperer – YouTube

Next in Equestrian Life’s Horses & Movies: ‘EO’, which recently screened at the Cannes Film Festival. EQ