Humans have a much to learn from our equine friends, even a humble grey donkey called ‘EO’, as we discover in the hit film and Jury Prize winner of the 2022 Cannes Film festival. 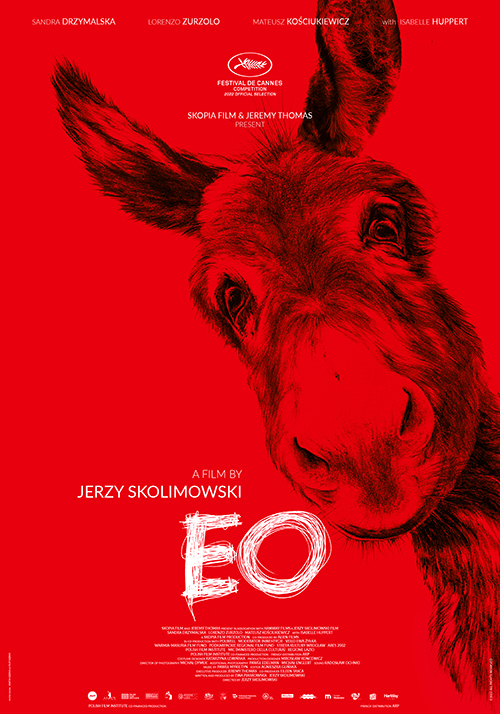 The official film poster for 'EO'.
Click here to discover what makes ELD arenas the obvious and best choice.

This 90-minute film is about a donkey called EO, who was born in a circus. Its 84-year-old Polish director was inspired by Robert Bresson’s Balthazar, a sixties French drama following the life of a donkey at the hands of various owners.

“The world is a mysterious place when seen through the eyes of an animal,” goes the storyline for EO, the Jury Prize winner at the 2022 Cannes Film Festival. “EO, a grey donkey with melancholic eyes, meets good and bad people on his life’s path, experiences joy and pain, endures the wheel of fortune which randomly turns his luck into disaster and his despair into unexpected bliss. But not even for a moment does he lose his innocence.”

In Jerzy Skolimowski’s version, shot in Poland and Italy, EO is first seen working in the big top alongside Kasandra, his caretaker and best friend. The two are parted when activists rescue him, although EO doesn’t want to leave. He is taken to a sanctuary where, among so many things, he misses Kasandra’s carrot muffins. Later he is captured to become the mascot of a football team, stolen by a gang trading in illicit horse meat and finally rescued by a young aristocrat.

TRIVIA During the making of the film many members of the Polish crew decided to stop eating meat.

During his career the director has worked with great actors such as Jeremy Irons and Robert Duvall, but never with a donkey. “Directors use intellectual arguments and emotional language to provoke actors to deliver the desired effect,” he says. “With my donkey the only way to persuade him to do anything was with tenderness: words whispered in his ear and a few caresses. Raising my voice, showing impatience or nervousness would have been the fastest path to disaster.

“The main difference is that donkeys don’t know what acting is, they can’t pretend anything – they simply ARE. They’re gentle, caring, respectful, polite, and loyal. They live to the fullest in the present moment. They never show narcissism, skimp on the supposed intentions of their character; and never discuss their director’s vision. They are excellent actors.”

To find his star, he approached a breeder who showed him pictures of the animals available. “I immediately liked those of the Sardinian breed,” recalls Skolimowski. “I knew EO must be grey with white spots around the eyes. The photo I liked the most was of a donkey at a stable near Warsaw. I visited him and immediately knew he was to be the one, his name was Tako.” 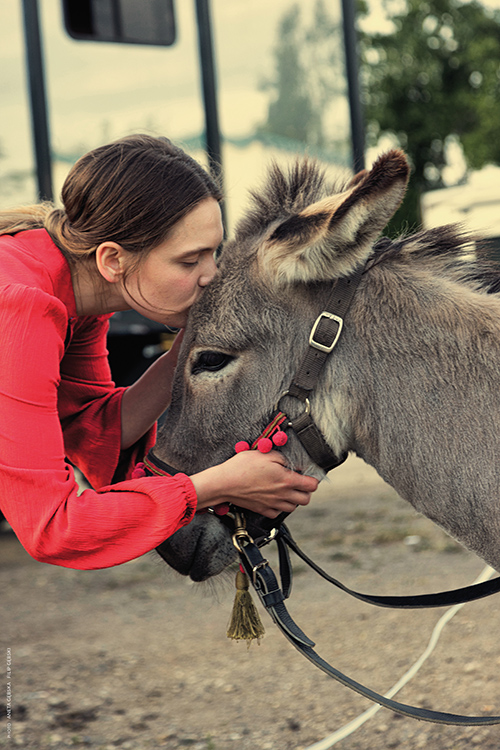 “Each had a very different character which made the execution of each shot quite unpredictable. It was like trying to solve an exciting puzzle each day finding out what such and such donkey liked, hated, feared or adored. Sometimes something quite innocuous, like a camera cable on the ground, would suddenly become an insurmountable obstacle and then, what we thought would scare them, like a waterfall gushing out of a huge dam, turned out not to be a problem at all.”

TRIVIA “It’s true donkeys are stubborn. It was easier to rearrange a scene than try to convince the donkey to do something it didn’t want to do.” – Skolimowski

Unless they are documentaries, there are never animals in movies without movie animal trainers. In EO, the chief wrangler was Agata Kordos, who has been working in the film business with various species for over 30 years. “During shooting we ensured the donkeys weren’t stressed, that they enjoyed working and having contact with the crew. Before filming they’d been introduced to interior studio conditions, as well as exterior locations on various terrains under different conditions. And they were taught to work under saddle and with a cart.  All were under the constant care of a veterinarian.”

One of the other animals in EO was a fox. Agata points out that working with wild species is not easy. “The fox taking part in the film was rescued from a fur farm and brought up by us from very early childhood. Furia trusts us implicitly. She willingly works with humans and has a lot of experience in front of the camera. Her scenes in EO were in a natural forest and she was motivated to perform her tasks with her favourite treats.” 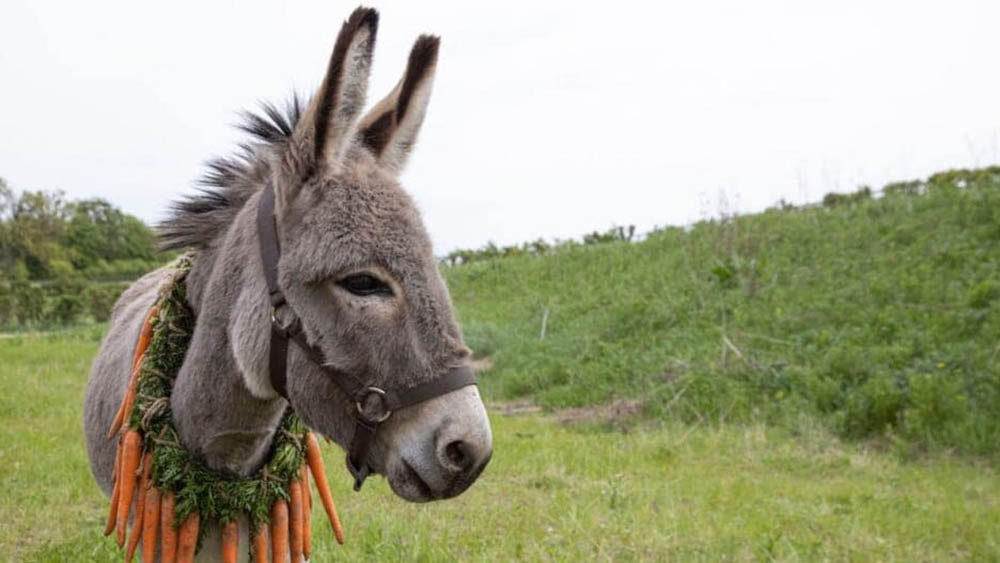 Tako on the set of the film. © Aneta and Filip Gebscy. 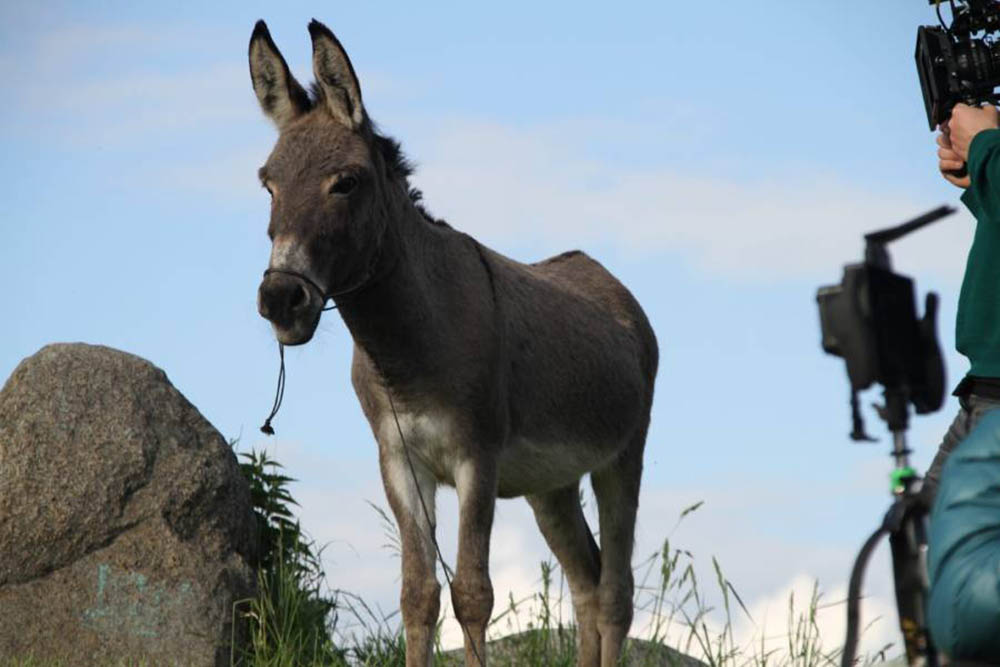 Filming one of the donkey extras. © Warmia-Masuria Film Fund. 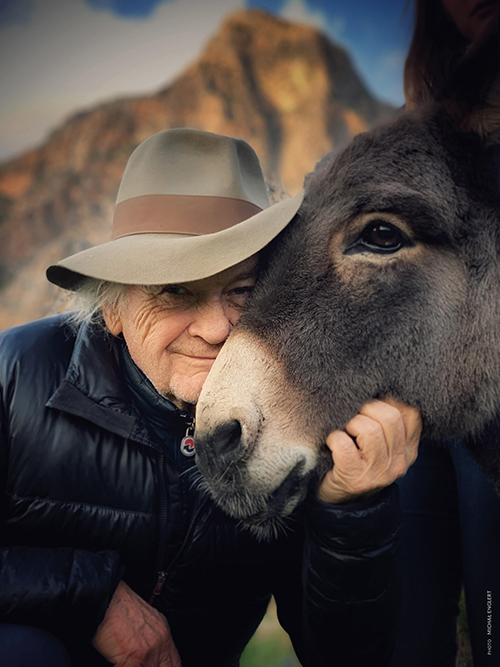 The director and star. © Aneta and Filip Gebscy.

(Agata’s most recent credit was as an animal trainer on Queen, a series presently screening here on Netflix about a renowned Parisian tailor and drag queen who returns to Poland to make amends with his daughter.)

The director and star. © Aneta and Filip Gebscy.

Polish Actress Sandra Drzymalska (Kasandra), had to overcome her initial fear of large-eared braying creatures. “I created a relationship with the donkeys which began during pre-production meetings, and learnt to fully trust them,” she says. “They have an acute sensitivity so I tried to stay calm and sure of myself. During filming I’d show them tenderness, and between takes I would thank them.” No doubt with carrot muffins.

Despite impressing the jury at Cannes, EO is still awaiting a distributor, but it can be viewed on Blu-ray. American film critic Ryan Leston recently wrote an overview of this prize-winning picture: “EO’s strange adventure is depicted through a series of sentimental yet surreal vignettes. He ambles from one predicament to the next and his haughty braying “eee-ohhh”, as well as the occasional huffs, are the only communication we get from EO. He is, after all, a donkey,” he wrote.

“But Skolimowski’s close camera work and gripping story keep us alongside EO every step of the way. We’re all rooting for him. And, even when scenes veer ever more into the surreal side of things, we can’t help but feel connected to the little donkey that could. There’s a certain quiet dignity in EO that you won’t find in a film about human beings.” EQ

Next time in Equestrian Life’s Horses & Movies, ‘The Sheik’, with Rudolph Valentino and the Arabian stallion Jadaan.